There are forces of evil acting around the world, trying to invent the ultimate biological weapon. This is in addition to the problem of new emerging diseases that come from natural sources but mutate over time.

One of the most recent scares in this regard was Anthrax, a microbial infection of Bacillus anthracis, which when inhaled can be fatal. There is, however, a treatment available if it is caught in time. All that is usually required is simple antibiotics unless the infection is antibiotic resistant.

One of the most debilitating illnesses that has resulted from bio-warfare weapons is Lyme disease, caused by a spirochete, Borrelia burgdorferi,  that is often spread by ticks. Frequently, there are co-infections, basically other infectious Microbes that are also carried by the ticks. Borrelia burgdorferi was originally used by Nazi Germany against areas of Czechoslovakia in WWII and then brought to the US afterward, experimented with on Plum Island where it apparently escaped and showed up in nearby Lyme, Connecticut. This illness can also be treated with antibiotics but is often discovered very late, requiring long term antibiotic application which can cause many other issues. Recovery can take many years if actually fully realized.

Another concern is the possibility of the Bubonic plague which actually does pop up on occasion. This microbe Yersinia pestis can also be treated with antibiotics but it is possible that a modified or mutated form could be antibiotic resistant. 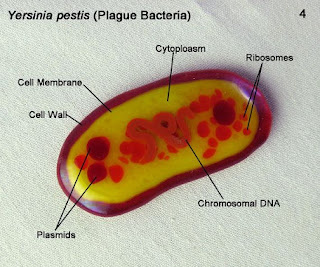 While there are a number of different bacteria that could be used as biological weapons, the examples above should be sufficient to highlight the concern.

There are many virus based scenarios that are far scarier. No one in the US has been vaccinated against smallpox since the 1970's unless they were traveling to certain foreign destinations and there are some sources that may have access to this virus. If introduced to the population, it could  spread like wildfire before vaccines could be distributed. However, it is possible that there could be a modified strain that the current vaccines would be useless against.

One of the greatest concerns is that some terrorist group might get a hold of and modify some virus with a very high mortality rate such as the Ebola virus. While the natural form of Ebola ( EVD ) is only transmitted by direct contact with body fluids or even skin to skin contact, there is concern that it might be weaponized so that it could be transmitted in aerosol form, possibly through sneezing or coughing. This could cause massive casualties since there is no cure for EVD and even with the very best treatment, there could be a 66 percent mortality. Sadly, those at greatest risk are the health care workers. Also, another factor with EVD is that for those who survive, the road to recovery is long, difficult, and almost never complete. After recovery, the patients almost always still have the virus in their body, waiting to infect another person up to a years afterward. Also, a few months after recover, blindness may follow along with possibly other neurological disorders.

There are even viral illnesses that have the potential of the worldwide elimination of human life. In particular, there is one viral illness that can mimic a zombie apocalypse in that it causes a mental madness that results in biting followed by a horrendous death with almost 100 percent mortality. Currently, 59000 deaths a year result, mostly in children. Once the symptoms appear, there is no known treatment. In history, there has only been 2 known survivors at a cost of nearly $1 million each. The saving grace that keeps this viral disease, Rabies, from spreading like wildfire is that it is transmitted through animal bites,  mostly dogs and bats but other animals can carry. If this virus was to be weaponized so that it spread by aerosol, sneezing or coughing, there could be a horrendous outcome.

So, you might ask, who is so seriously demented so that they would want to do such devastation to humanity? Think about it, there are radical groups in numerous places around the world that have extreme hatred in their hearts or that have some feeling of self righteousness that they feel that they were appointed by God to do what they think is his bidding. There are countries such as North Korea which have been reported to try various chemical and biological weapons on political prisoners. There are even some who might make designer diseases just so that they can sell an antibody or treatment for profit.

Regardless of who it is, these people or groups of people place their own ambitions above humanity. They have little concern of others, only for their own selves.

The real issue here, is there something that can help protect you and yours against the possibility of such inhumane conditions?

There are some things that might actually be of help. These things are used everyday by people who have been fortunate enough to hear about them and try them. No, none of them are perfect and none of them work for everything. However, using some of these things might just give you an edge that other may not have.

Suppose that there was a viral outbreak with 50 percent mortality. The question is why do 50 percent die and 50 percent survive? What makes the difference? In some cases, the difference may be in the age of the victims with the elderly being more susceptible because their immunity is just not as good as it once was. Others may have immune impairment or some other condition that limits the immune system.

There are foods and herbs that help the immune system such as onion, garlic, or ginger. There are minerals that can be very helpful such as selenium, iodine, and Silver. Having the optimum levels of these can add somewhat of a boost to your immune systems response to some things but not to everything. Vitamin D3 is very important in fighting a number of diseases that result from microbial infections and vitamin C is very important in fighting illness.

Among the things listed above is Silver which was used for a few hundred years before the introduction of antibiotics such as penicillin. Today, one form of silver has been growing in popularity is known as Colloidal Silver. There are a number of sites offering this type of product and each has its own claims.  There is also a number of sites that try to dissuade potential users by providing horror stories and such, the bulk of which are exaggerations or just plain misleading. One thing that taking excess colloidal silver can do is to give the skin a bluish tint. The point is not to over do using colloidal silver or in reality, anything else.

Another thing that has been increasing in popularity is the use of frequencies to kill microbes. While this has been around for a long time, there has been progress made in the past 80 years or so.

These products range from Rife machines that pass radio waves through the air and into the body, killing microbes in the process. There are actual videos showing that these machines do actually kill or destroy microbes over time.

There are also other more portable machines referred to as zappers which use direct contact to the body and apply frequencies directly rather than through radio frequencies. There are also videos that show that at least the better of these devices also kill a wide range of microbes in reasonably short time.

There are also the naysayers that try to claim that these devices do not work or that they are quack devices only designed to take money. Consider that at any time, there are 20 to 50 sites selling various designs of these devices. If they actually did not work, then the government would shut them down, which it has done to some in the past. However, some of the better models work so well that the government and law enforcement agencies are not able to prove them as frauds.

Some of these devices are not sold for use on humans but instead are water treatment devices. If they were sold for human use, a prescription would probably be required as it is for any medical device that can affect health.

While these devices are not perfect and do not work for everything, wouldn't they be a worthwhile investment if they only increased your chance for survival by only a few percent, or if they improved your recovery, or even just reduced the extent of infection? Then again, what if they were really effective and made a significant difference.

When looking at these devices for killing or destroying microbes, consider ParaZapper products, long a leader in the field of LVPEF ( Low Voltage Pulsed Electric Fields ).

benefits of dark chocolate
What to wear: outfit ideas for Christ…
Blackjack: What’s in a Name?
Most Beautiful Mountain Lakes in Swit…
Blueberry Muffin Mix Pancakes
spider bites
Metabolic, Metabolism, Metabolize, and Long Life, What is the Importance?
What the zapper does to germs
The Silver Spoon
Lyme Disease - Hitting the Bull's Eye
Chikungunya - Still spreading across the Carribean and to the US
Chikungunya - Contorted in Pain
MERS in America, will it become a pandemic?
Dengue fever