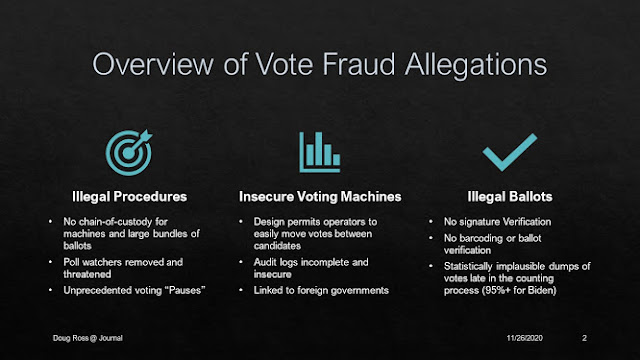 nothing new about any of this.

but a lot of people are rolling their eyes over Powell's claims on computer software hacking, but a lot of people on the left in third world countries figure that the CIA has been doing this for years, and although even Trumpieboy's supporters are suspicious of the claim of the kracken, the tech types are writing a lot of comments and claims supporting her claim... and one finds they are posting geek type information on conservative sites and even on non typical forums. Here's one at a hunters forum that goes into details.

But this lists a lot of the claims, and includes links.

And some of them make one go "WTF" for the audacity of the theft and the data should be easy to prove (although I believe one rerpot says they "lost" the chain of evidence so maybe not).

that type of ballot box stuffing puts the suspected shennanigans of the Hello Garci scandal to shame.

is the MSM covering it?
Well Dilbert is an expert in persuasion and business psychology, and up to now has been a bit skeptical about the claims, and even more skeptical that if true they could be proved in court.

But today, after a discussion of how Biden could be the best president at this time, in the middle of the podcast  he notes how the story is being spun and denied by the MSM to persuade you to ignore the evidence.

no I don't know what to think, mainly because between the two typhoons that hit us and the internet outages for the last month (due to upgrade of the internet cables in our town to supply wifi for kids to do school work at home).

But you know, so far Trumpieboy's followers have a life and have stayed quiet. But I also remember when Marcos tried to steal the election and 2 million Filipinos went out praying in a peaceful protest to stop him.

The revolution will not be televised, it will be decentralized.