The SJW pretend honoring the bloody Aztecs represent all Indios and Metzisos in the US, and there are not one but two Hollywood films emphasizing the pagan aspects of The Day of the Dead (aka all Saints day) without noting any Catholic aspect to the feast.

But the actual Mexican fiesta is today, in honor of the metziso Virgin who appeared in Mexico to an Aztec convert dressed in native dress. The picture is found in most Mexican homes, reminding them that at a time when the Spanish wondered if they were fully human, nevertheless Mama Mary appeared to one of their own and reminded them "am I not your mother?".

Dallas news article here about the local fiesta. And a lot of other cities hold the fiesta in the USA, and also here in the Philippines. 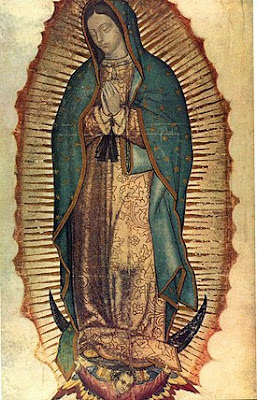 The shrine in Mexico city is one of the largest pilgrimage sites in the world.

more at Mercatornet, which puts the vision into social historical and cultural context, and notes: Loved by the people, but hated by the anti religious elites.

While Our Lady of Guadalupe is enormously popular in Mexico, the image – being inextricably linked to Catholicism – is not universally loved. The struggle between the religious and the irreligious has been one of the key conflicts in Mexican history...

During the 1920s, the Catholic Church was viciously persecuted by the leftist victors of the Mexican Revolution. Priests were shot, churches were burned and in some regions of the country the practice of Catholicism was outlawed completely.

...  Indeed, in his book about Mexico of the 1930s, Evelyn Waugh writes of how during the fiercest persecutions, the Indians guarded the Basilica at Guadalupe day and night, for fear that anti-clerical forces would attempt to rid Mexico of the tilma once and for all. During the 1920s, far-left elements did succeed in getting a large bomb into the Basilica, and detonating it underneath the image, but the tilma was left strangely untouched by the blast.

and of course, modern evangelicals have a great hatred of Mama Mary, seeing her as a false goddess in rival of God, not as one who shows us God loves ordinary families and Jesus had a mother who he respected. No, Mary is not "worshipped" or "adored". She is honored. Educated Catholics know the difference, but never mind: The bigots define the words differently to confuse the uneducated.

But in modern times, feminists have remade her as a goddess figure, history is rewritten to make her a conspiracy by evil priests, and of course, avant garde artists portray her with ridicule.

Why, given the irrefutable fact that Our Lady of Guadalupe is an integral part of Mexican identity, did Diego Rivera choose to all but omit it from his definitive account of his country’s history? The underlying ideology of The History of Mexico is Marxist, and according to this ideology, religion is simply the opium of the masses, and a tool for the exploitation of the proletariat. The role of religion in Mexican life was a baleful one in Rivera’s eyes, and he predicted that it would have no role in the bright future which his painting predicted was inevitable. Our Lady of Guadalupe, therefore, presented the artist with a difficult problem. As an atheist, by definition, Rivera had to believe that the story of the apparition was built on lies, probably dreamt up by the clerical-colonial elite.

and the hatred continues: modern PC artists continue to ridicule the Virgin (and those stupid deplorables who honor her). Because mother hood, dignity and pregnancy are soooo yesterday.

What is that part about pregnancy?

The Virgin of Guadalupe is not only a dark virgin, showing she is the mother of all, but is shown with her sash high up, meaning she is pregnant... and is therefore the patron of the pro life movement.

Another reason for the PC to hate her.