oh no not my coffee

Coffee rust and the history of the Coffee crop of Colombia.

And includes this factoid:

Historians suggest that this is part of the reason why Britons prefer tea nowadays. “Sri Lanka moved over to tea production” since coffee was no longer profitable, explains Aaron Davis, head of coffee research at Royal Botanic Gardens, Kew. Luckily for Asian producers, Britain was eager to switch its taste when their coffee supply vanished.

I'm not sure that is true (uh, they drank beer and ale back then, not coffee). Indeed, a few medical history articles I read relate how the death rate went down in both Japan and later in England with tea drinking, although I suspect the reason was fewer deaths from water bourne illnesses.

BBC article on tea drinking there.

tea was expensive and used medicinally until Charles II's Portuguese wife introduced it as a routine pick me up.

“When the queen does something, everyone wants to follow suit, so very, very gradually by the end of the 17th Century, the aristocracy had started sipping small amounts of tea,” Pettrigrew said. Of course, the upper class didn’t invent the ritual of tea-drinking themselves – they were imitators too. As Pettigrew recounted, “Until tea arrived with the Dutch, we [the English] didn’t know anything about tea. No sugar spoons, no cups, no tea kettles (only kitchen kettles), so we did what always happens: we copied the entire ritual from China. We imported [Chinese] tiny porcelain tea bowls, the saucers, the dishes for sugar, the small teapots.”

here is an example at a British porcelain company: 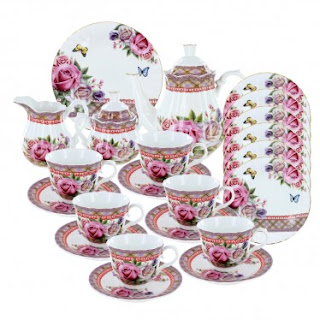 a full British "high tea" is a meal of delight, but the average Yank just plops a tea bag in a cup of very hot water, or nowadays, adds a teaspoon of powdered instant ice tea to the hot water.

Lolo always drank his with sugar and calamansi (a small lime like fruit that grows on a bush in our front yard).

when I worked in Africa, the tea was black and strong, brought to us in a pot covered with a "tea cosy" to keep it warm, and we added cream and sugar as desired.

Here in the Philippines, they do have various teas, and serve ice tea in restaurants. Milk tea is also in vogue right now: But I dislike it beause it is very weak tea. They also sell ice tea in bottles, both green and regular, with various fruit joices added.

We "Brew" tea in our coffeemate, but I usually just use the powdered drink with my water for meals, although now that we switched from city water which was highly chlorinated and tasted terrible, back to our deep well water, I am back to drinking water with my meals.

oh no not my coffee