The 2019 Coronavirus Disease (COVID-19) caused by the new coronavirus SARS-CoV-2 is now raging around the world. Existing studies have shown that SARS-CoV-2 infects host cells through the receptor ACE2. In a new study, scientists discovered that neuropilin 1 (NRP1) is a factor that can promote SARS-CoV-2 to enter cells. NRP1 is located in the respiratory tract and olfactory epithelium, which may be an important factor that contributes to the infection and spread of SARS-CoV-2.

Clinical studies have found that SARS-CoV-2 can affect multiple organs such as the lungs and kidneys, and can also cause neurological symptoms, including temporary loss of smell and taste. Therefore, the symptom spectrum of COVID-19 is quite complex. In 2003, a related coronavirus-SARS-CoV caused a much smaller outbreak. This may be because the virus infection was limited to the lower respiratory system, making the virus less spread. On the contrary, SARS-CoV-2 will also infect the upper respiratory system, including the nasal mucosa, so it will spread rapidly through active virus shedding (such as when sneezing).

The Leader into Cell

In order to infect humans, SARS-CoV-2 must first attach to the surface of human respiratory or intestinal epithelial cells. Once attached, the virus invades the cell and then replicates multiple copies of itself. These replicated viruses are released, leading to the spread of SARS-CoV-2. The process of SARS-CoV-2 attaching and invading human cells is accomplished by a viral protein called “spike” protein, and it has tissue chemotaxis. This tissue chemotaxis depends on whether there are docking points on the cell surface, the so-called receptors. These receptors allow the virus to dock and invade the cell. Interestingly, the researchers found that SARS-CoV, which uses ACE2 as the receptor like SARS-CoV-2, produces disease symptoms that are quite different from SARS-CoV-2. 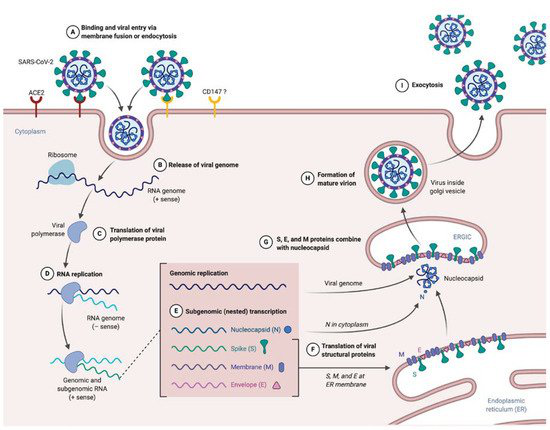 In order to understand the differences in the tropism of these tissues, these researchers observed the “spike protein” of SARS-CoV-2. The SARS-CoV-2 spike protein differs from its older relatives in that it inserts a furin cleavage site. Similar sequences have been found in the spike proteins of many other highly pathogenic human viruses. When a protein is cleaved by furin, a specific amino acid sequence is exposed at its cleaved end. Such a protein substrate that can be cleaved by furin has a characteristic pattern sequence known to bind to neuropilin on the cell surface.

Experiments using laboratory-cultured cells, artificial viruses that mimic SARS-CoV-2, and naturally-occurring viruses have shown that NRP1 can promote viral infections in the presence of ACE2. By specifically blocking NRP1 with antibodies, this viral infection can be suppressed. The relationship between the two is like the entrance and the guide. Among them, ACE2 is a door into the cell, and NRP1 may be an important factor that guides this virus to find and enter this door. Because the expression level of ACE2 in most cells is very low, it is not easy for the virus to find the door into the cell. Other factors such as NRP1 may be necessary to help this virus enter the cell.

Potential Access to the Nervous System
Given that loss of smell is one of the symptoms of COVID-19, and NRP1 is mainly found in the cell layer of the nasal cavity, these researchers examined tissue samples from dead patients. Other experiments in mice have shown that NRP1 can transport virus-sized nanoparticles from the nasal mucosa to the central nervous system. These nanoparticles are chemically engineered to bind to NRP1. In contrast to control particles that have no affinity for NRP1, when these NRP1-binding nanoparticles are applied to the noses of these mice, they reach the neurons and capillaries in the brain within a few hours.