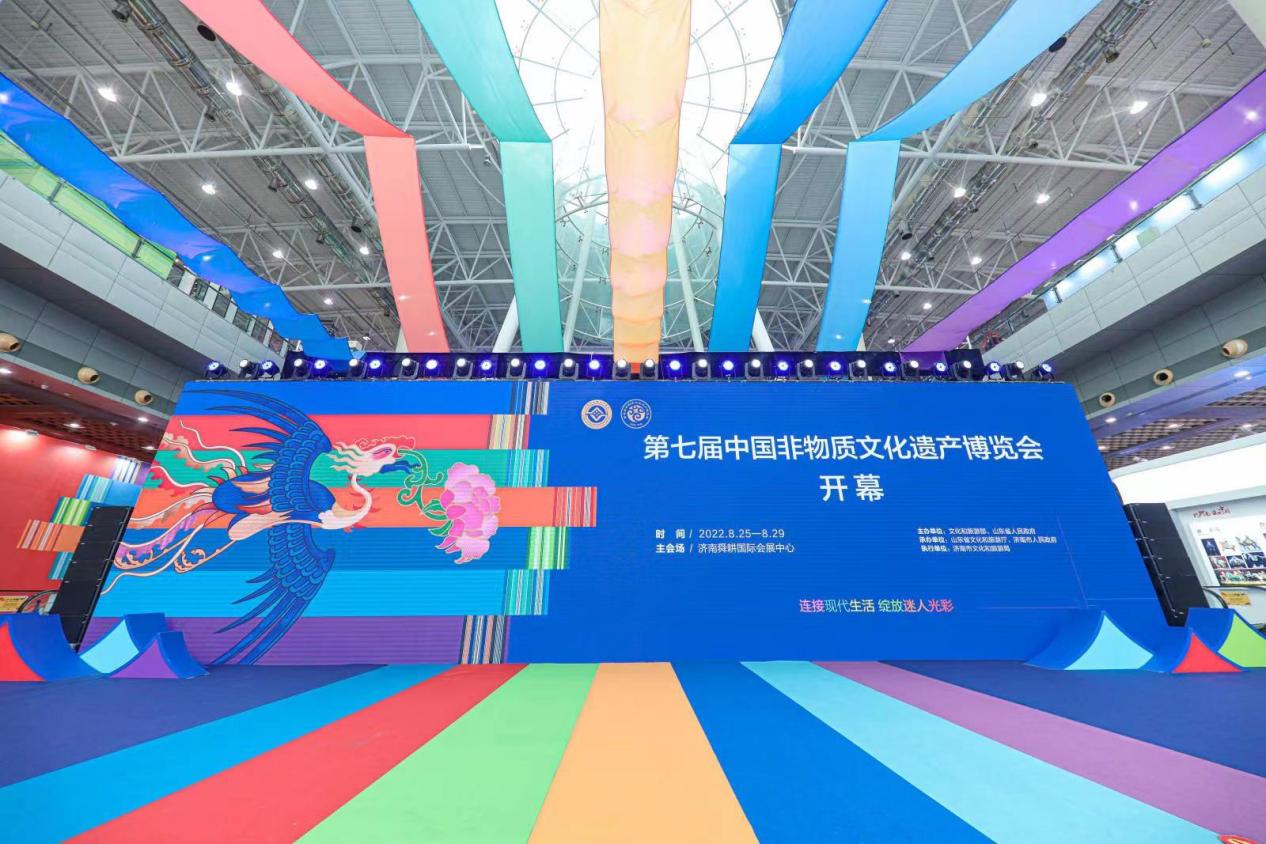 During the exhibition, the booth of Wang Xiuying, the inheritor of the Xuzhou sachet, was always crowded with people. While chatting with Wang Xiuying, people choose their favorite sachets. The sachet made by Wang Xiuying is simple in shape, exquisite in design and colorful. It contains more than 20 kinds of carefully selected Chinese herbal medicines and has a unique fragrance. 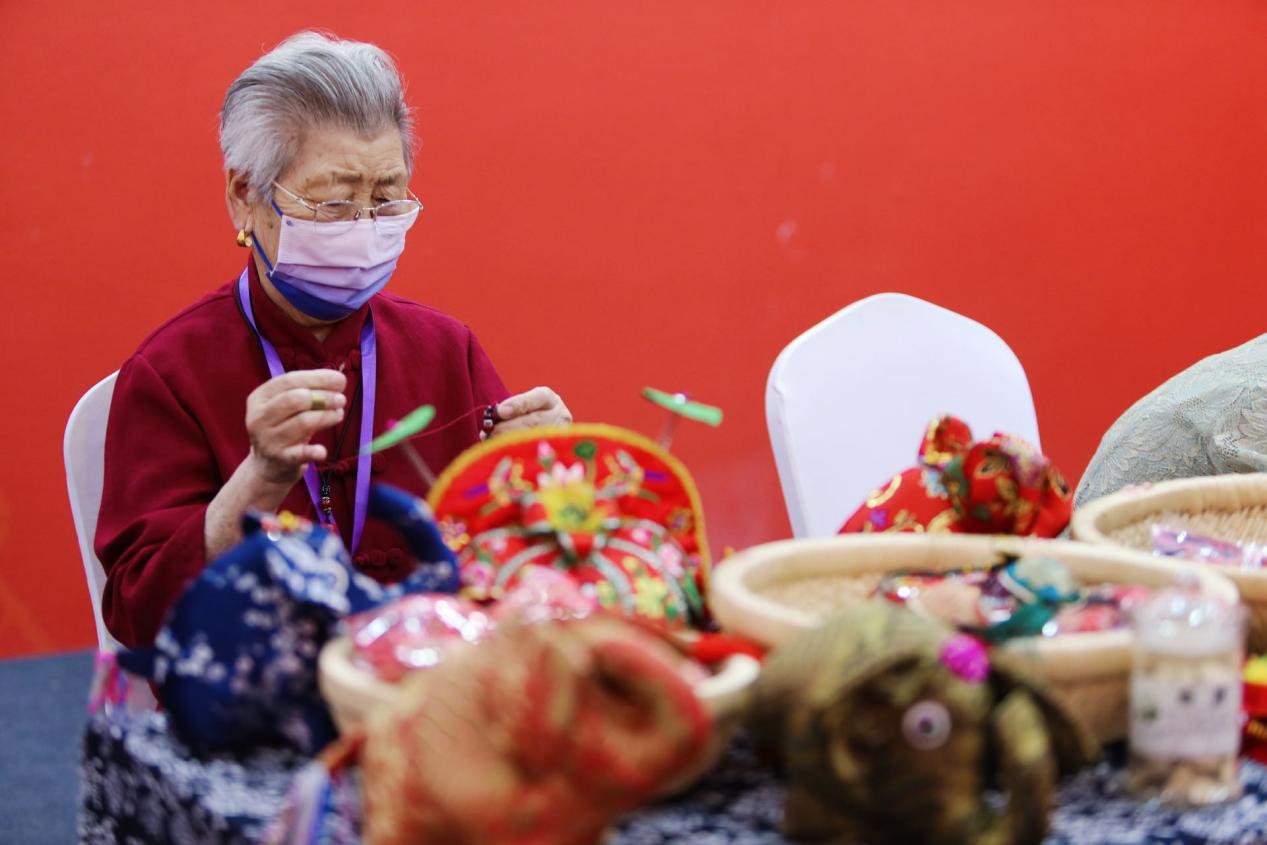 It is understood that under the leadership of Wang Xiuying, more than 400 female apprentices in the village followed her to learn the sachet craft, which led to the employment of more than 3,000 surrounding villagers. In 2021, the output value of sachet in Mazhuang Village reached more than 8 million yuan.

Folk art is the precious wealth of the Chinese nation. It is of great significance to protect, inherit and make good use of these treasures left by our ancestors to continue the historical context and build a strong socialist culture. 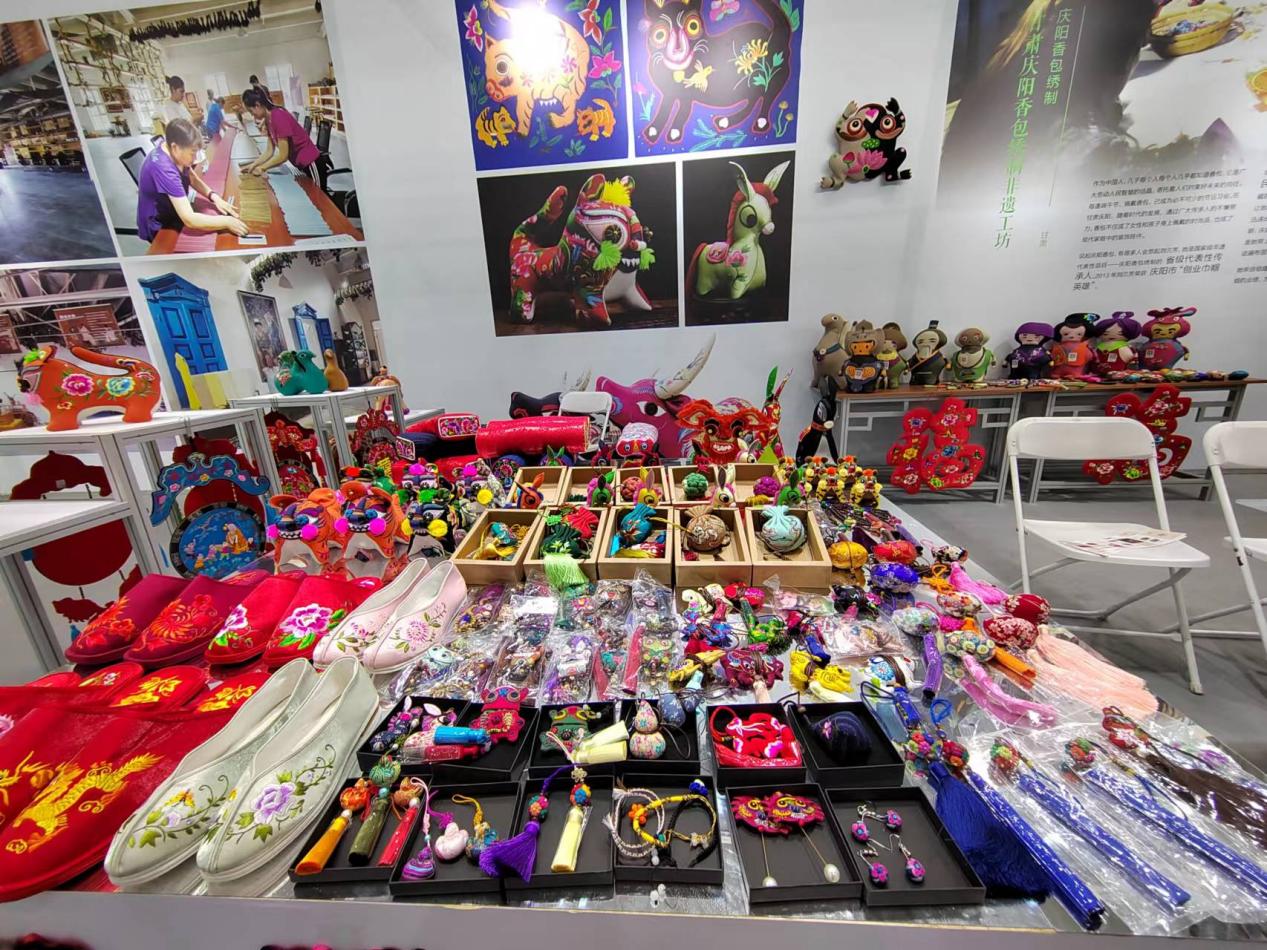 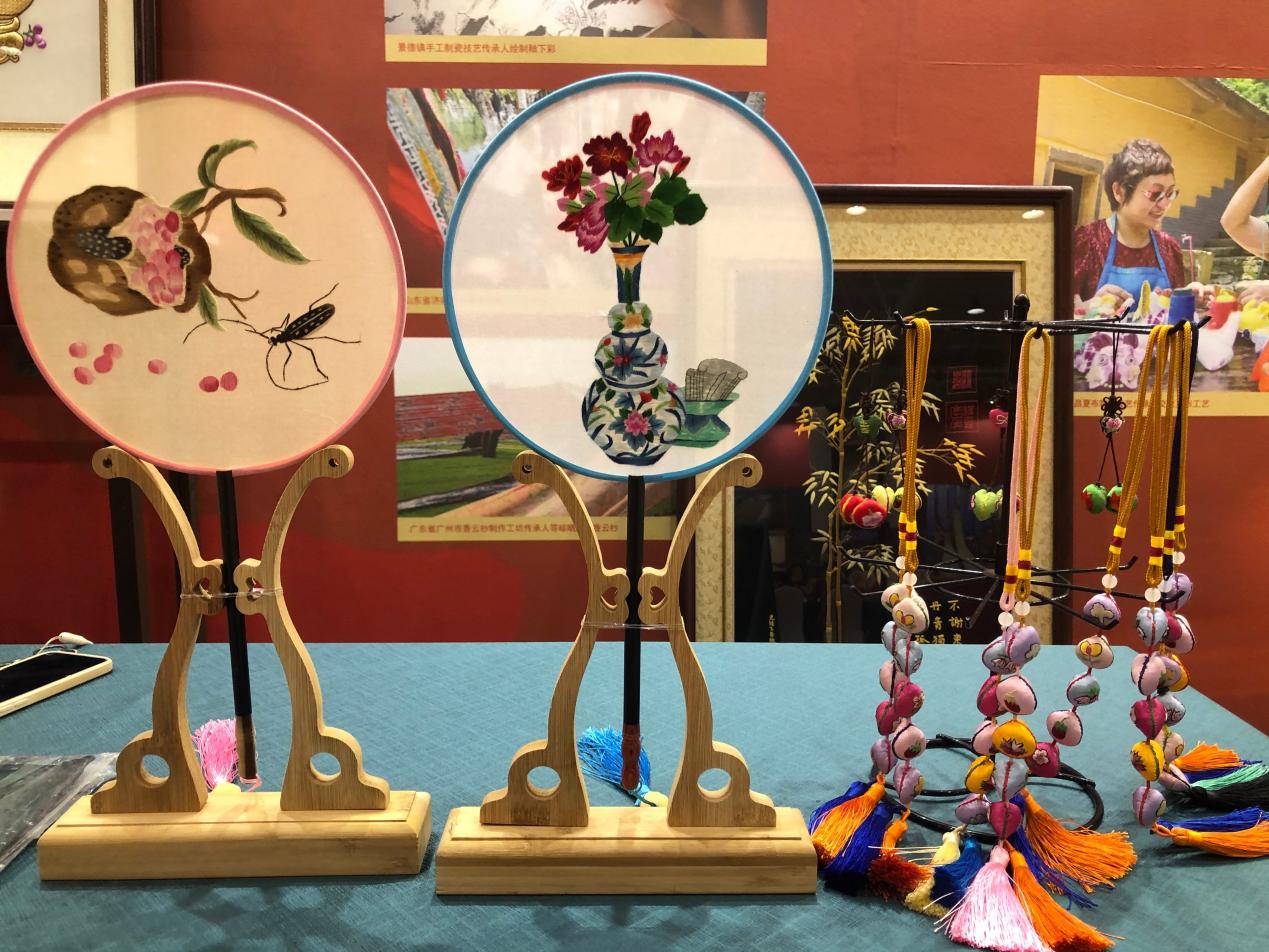 In 1990, Liu Ruiling, who graduated from technical school, entered Chaozhou Embroidery Factory. Now, she is very good at gold and silver velvet mixed embroidery, nail gold embroidery and other embroidery craft, and has become a representative inheritor of Chaozhou embroidery.

Change with each passing day and come down in the same river.

In June 2014, the Grand Canal of China was listed on the World Heritage List by UNESCO. In 2019, the construction of the Grand Canal Cultural Belt became a national strategy.

Historically, people along the Grand Canal have used their hard work and wisdom to create craftsmanship, such as Gold lacquer inlays, Woodcut New Year pictures, Xingyao ceramics, Jun porcelain, Lu brocade, She inkstone, Juangong fan, Gumu inlays, which adorns people’s lives. Entering the new era, people expect to build a bridge between the ancient intangible cultural heritage and modern life so that traditional culture will have a broad future. 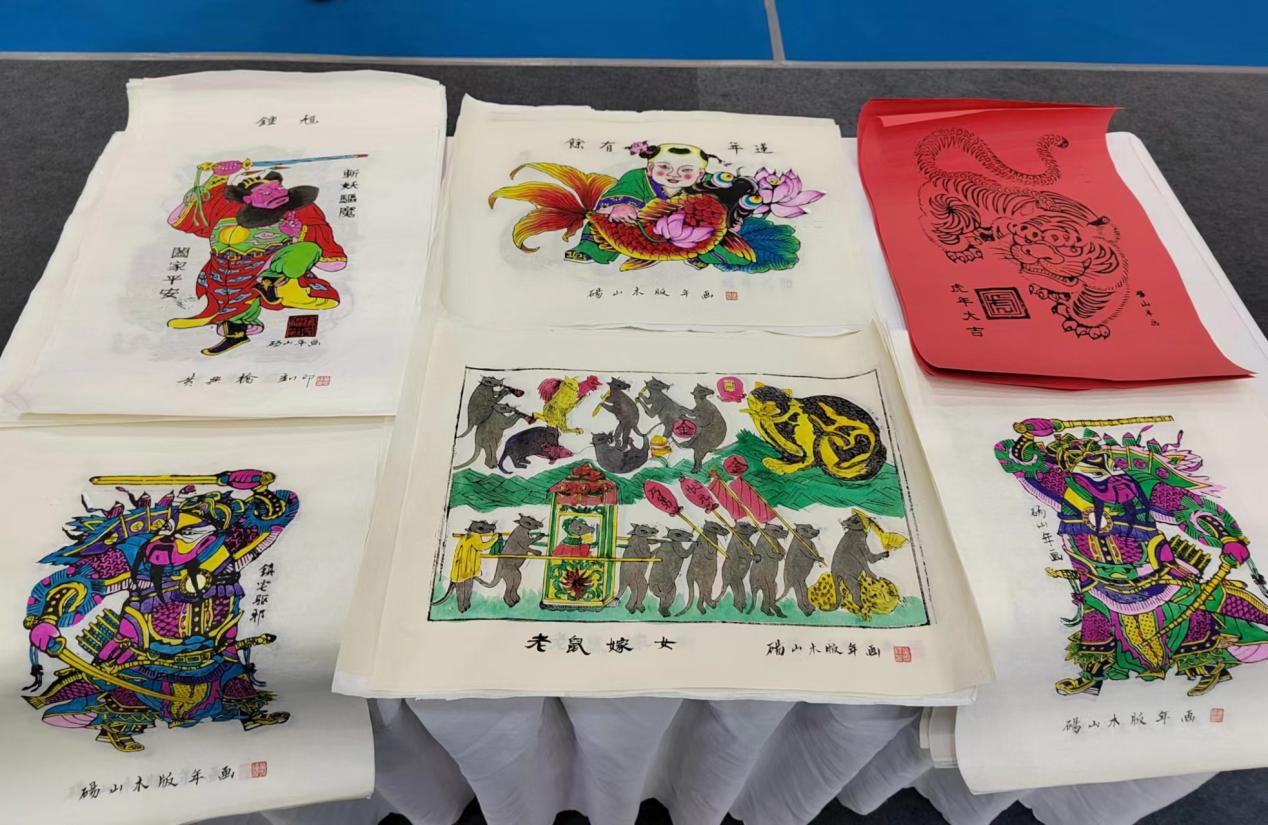 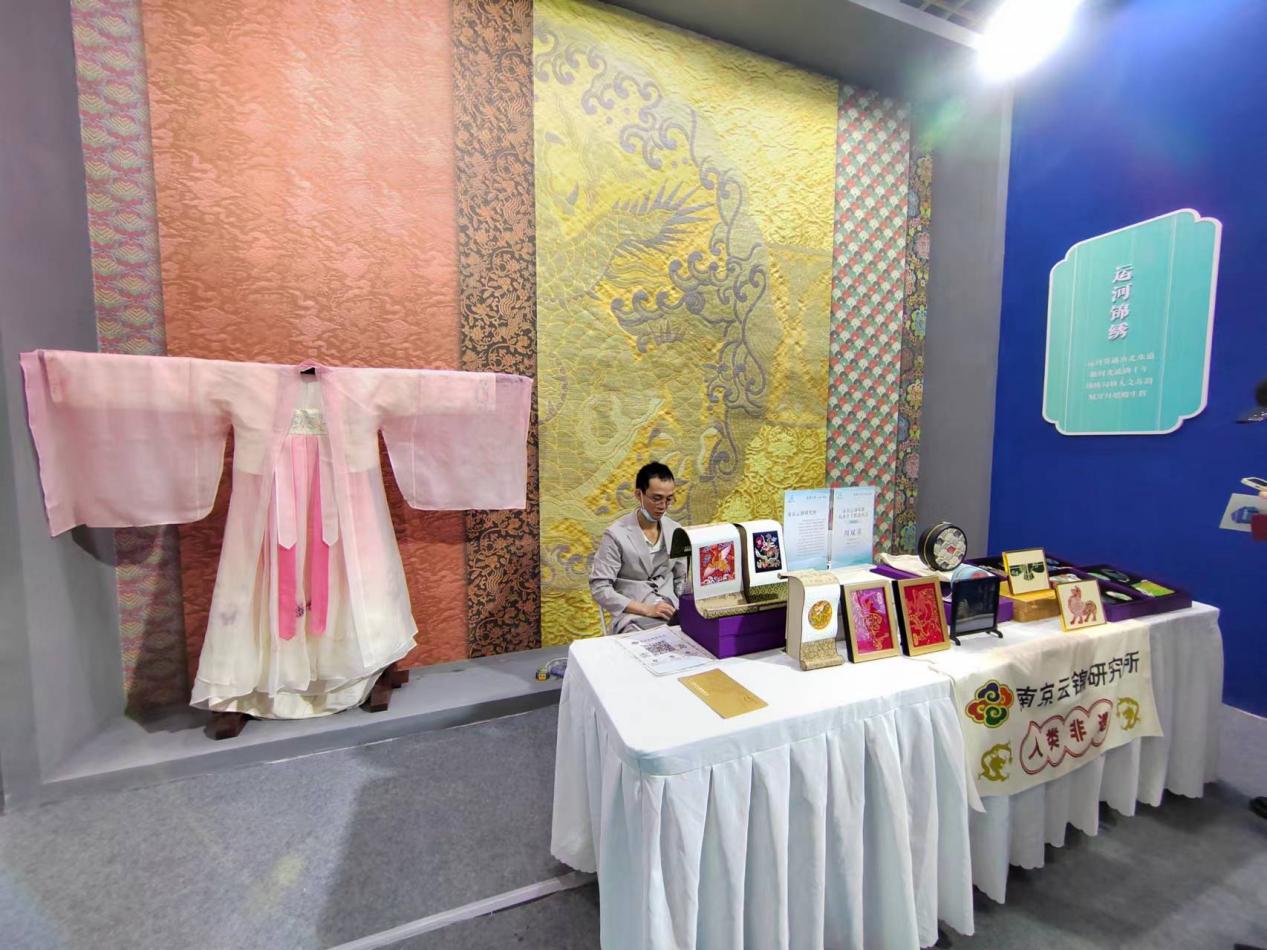 The National Intangible Cultural Heritage Project ‘Gold Lacquer Embedding and Painting’ is one of the eight wonders of Yanjing. Su Yongmao has been engaged in gold lacquer inlay for more than 40 years, starting from the initial apprentice and now mastering the whole process. Gold inlaying consists of four steps, each of which includes multiple processes. Su Yongmao introduced that there are difficulties in every step, such as the step of making a wooden plate. No matter how small the object is, the nail cannot be used, but the traditional mortise and tenon structure is used.

Along the south of the canal, the petal-shaped painted pottery discovered by Yangshao Culture in Henan Exhibition Hall, Gongxian kiln white porcelain which laid the glaze pattern of ‘South Green and North White’ Chinese ceramics, Tang Sancai, which is famous at home and abroad, Ru porcelain in Northern Song Dynasty, etc. all shows the historical context of ceramic development and the long history of Chinese civilization. 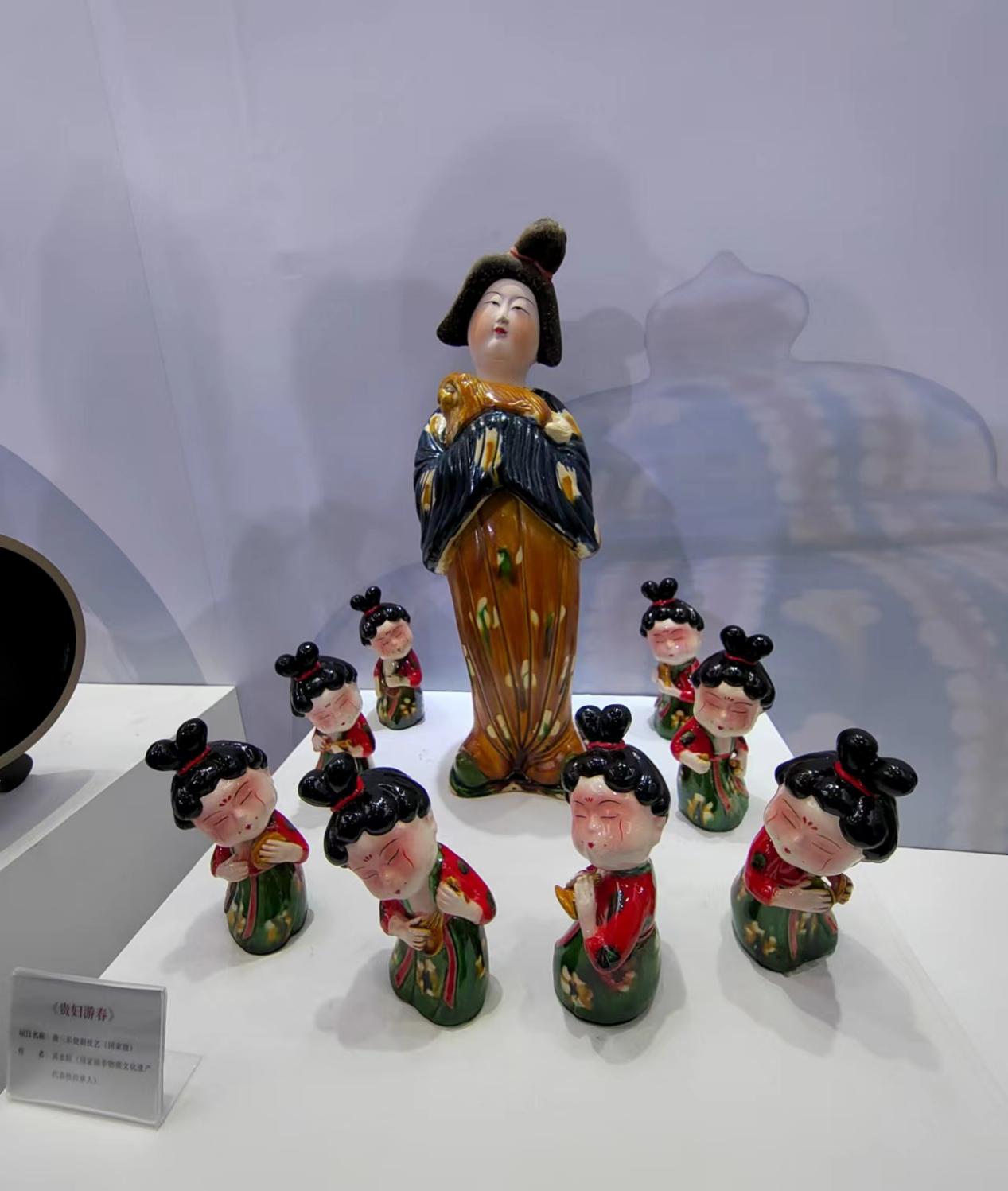 The grand canal, which has been flowing for thousands of years, and its splendid culture are brightly exhibited in the present, closely linked with people’s lives. It used to be a special gold lacquer inlay for the court, and many new products adapted to modern people’s aesthetics were derived, such as some holding boxes and ornaments suitable for home life. Now Lu brocade is loved by people because of its strong permeability and comfortable wearing. Small screens, ornaments, etc. developed based on Gumu inlay craftsmanship of large pieces of furniture are both beautiful and practical. 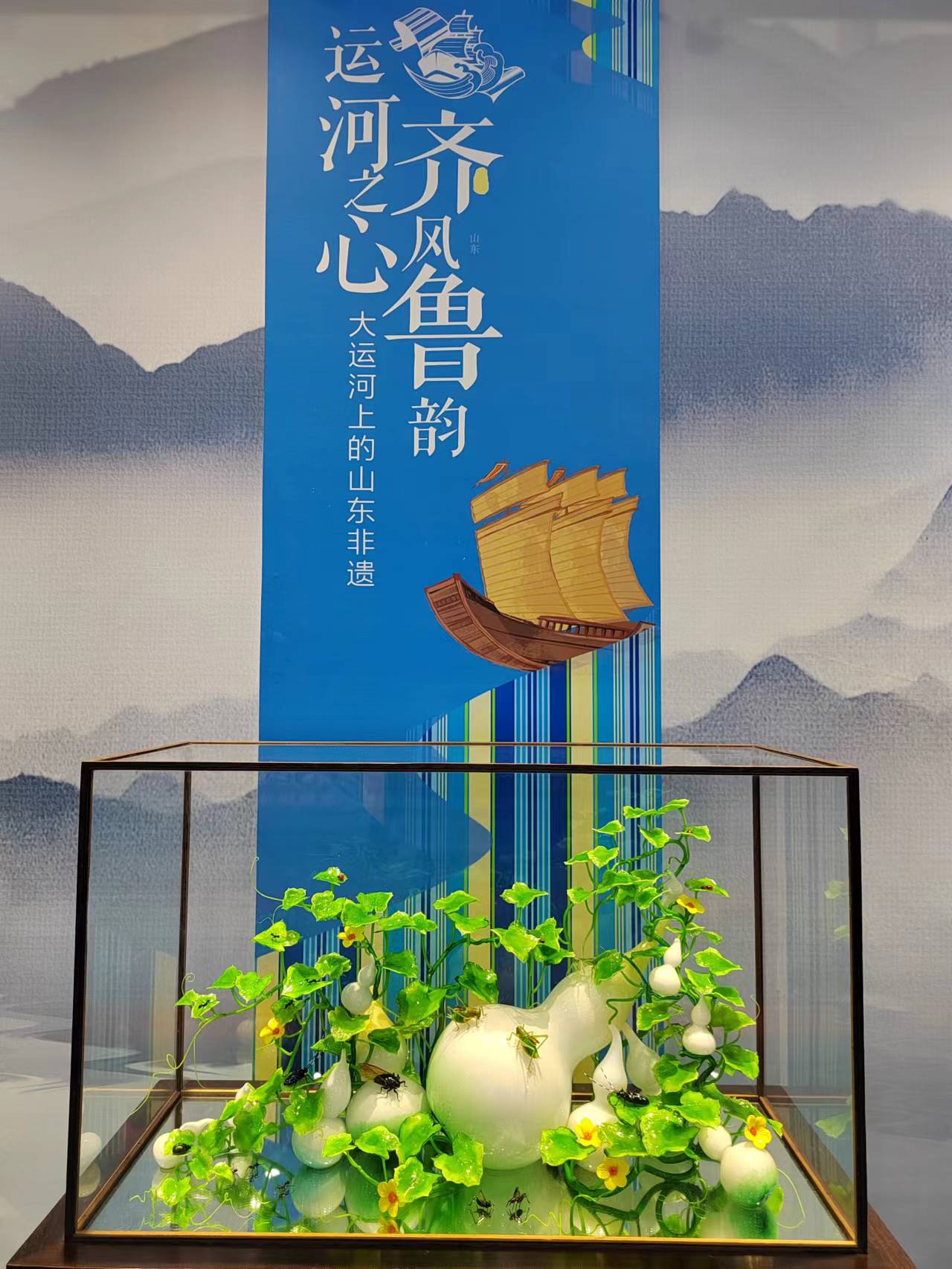 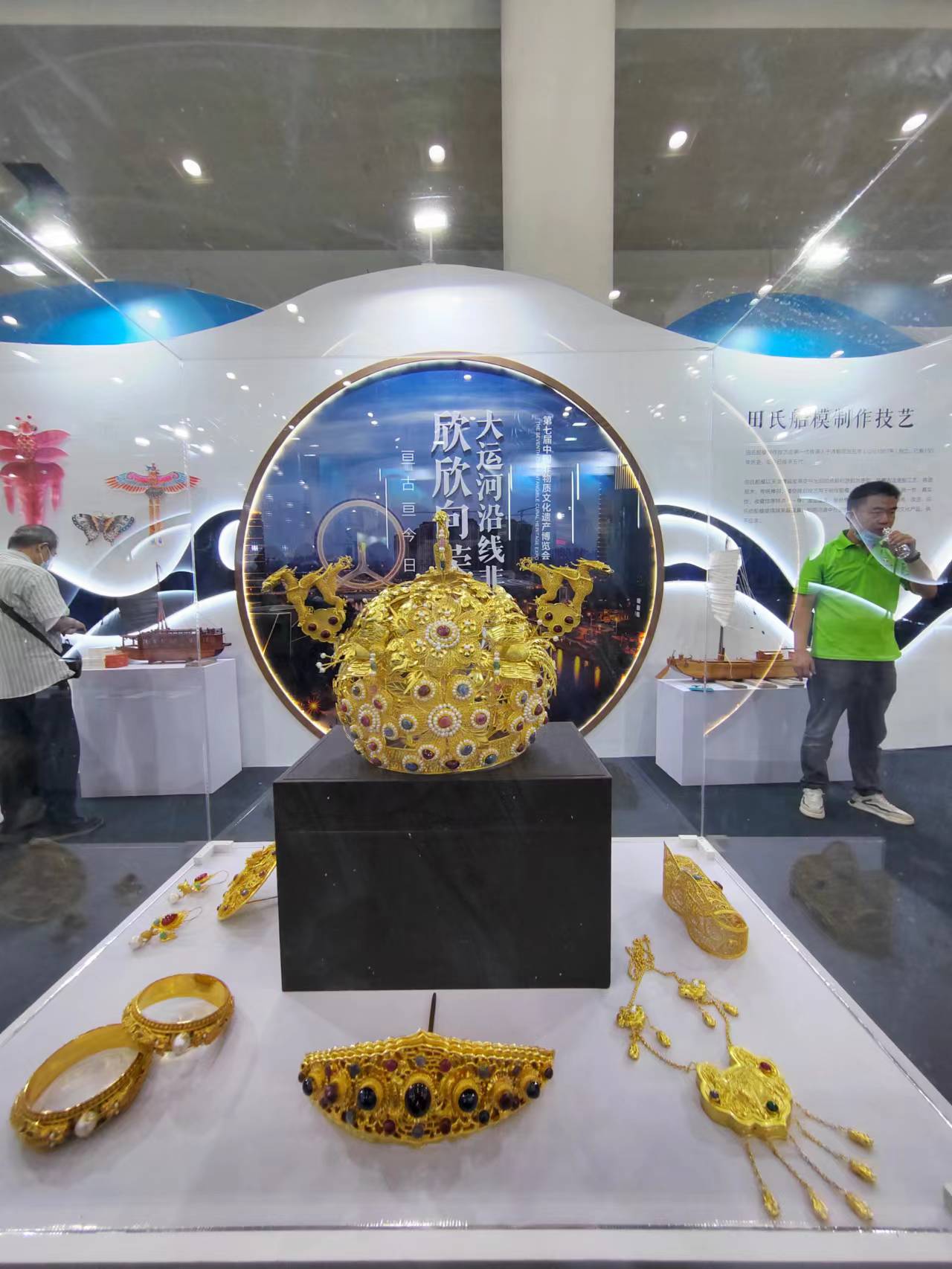 There are shortcuts to a better life.

Above the booth of the intangible cultural heritage workshop of Sulonggu Embroidery Co., Ltd. in Huzhu County, Qinghai Province, a photo stands out. A pile of brand-new hundred-dollar bills was stacked on the table, and the surrounding women were smiling, counting the bills in their hands and enjoying the joy of harvest. In the photo, the Tu embroidery in the hands of Li Juanye, a representative inheritor at the provincial level, is a collection of red, yellow, green, blue, purple and other colors, as if the rainbow had been embroidered on the canvas. Li Juan said that Sulonggu Embroidery Co., Ltd. set up bases and poverty alleviation workshops in four towns and villages in the county in the form of ‘enterprise+base+farmer+talent+market’, which led more than 2,000 rural women in the county to participate in handicraft making, with an average annual income increase of 20,000 yuan per person. 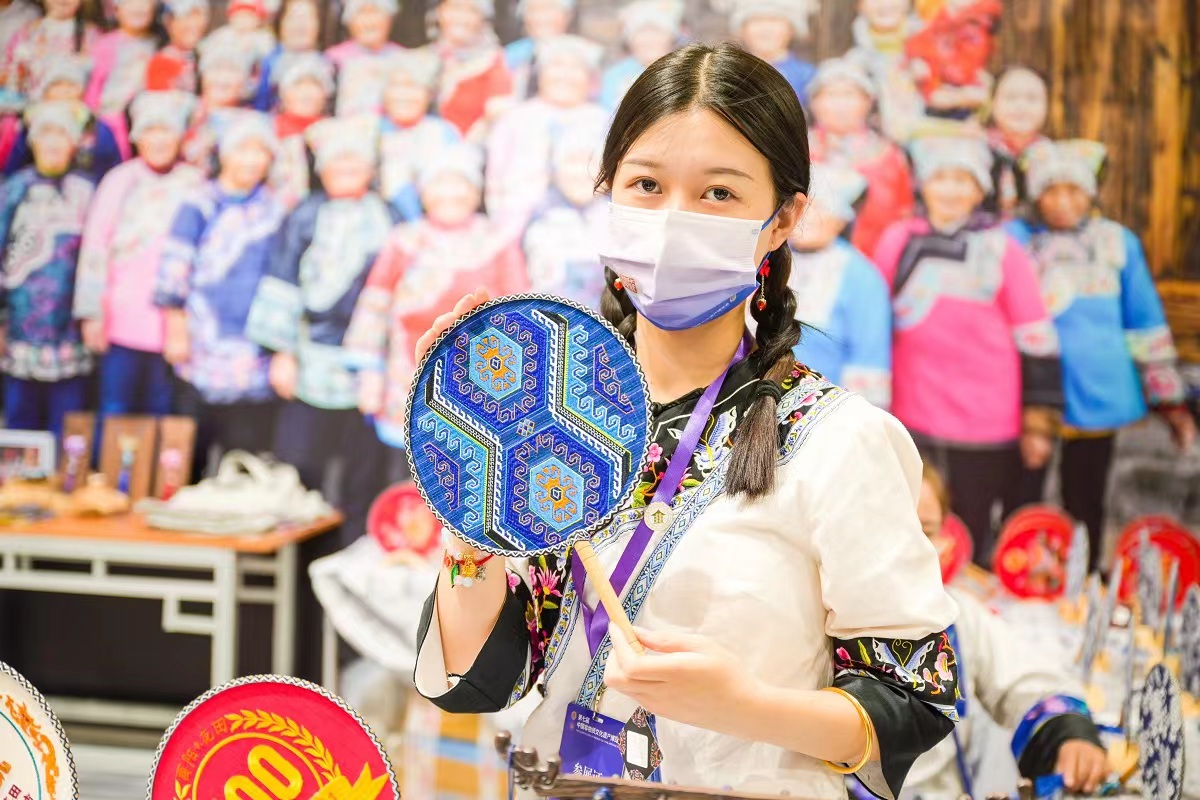 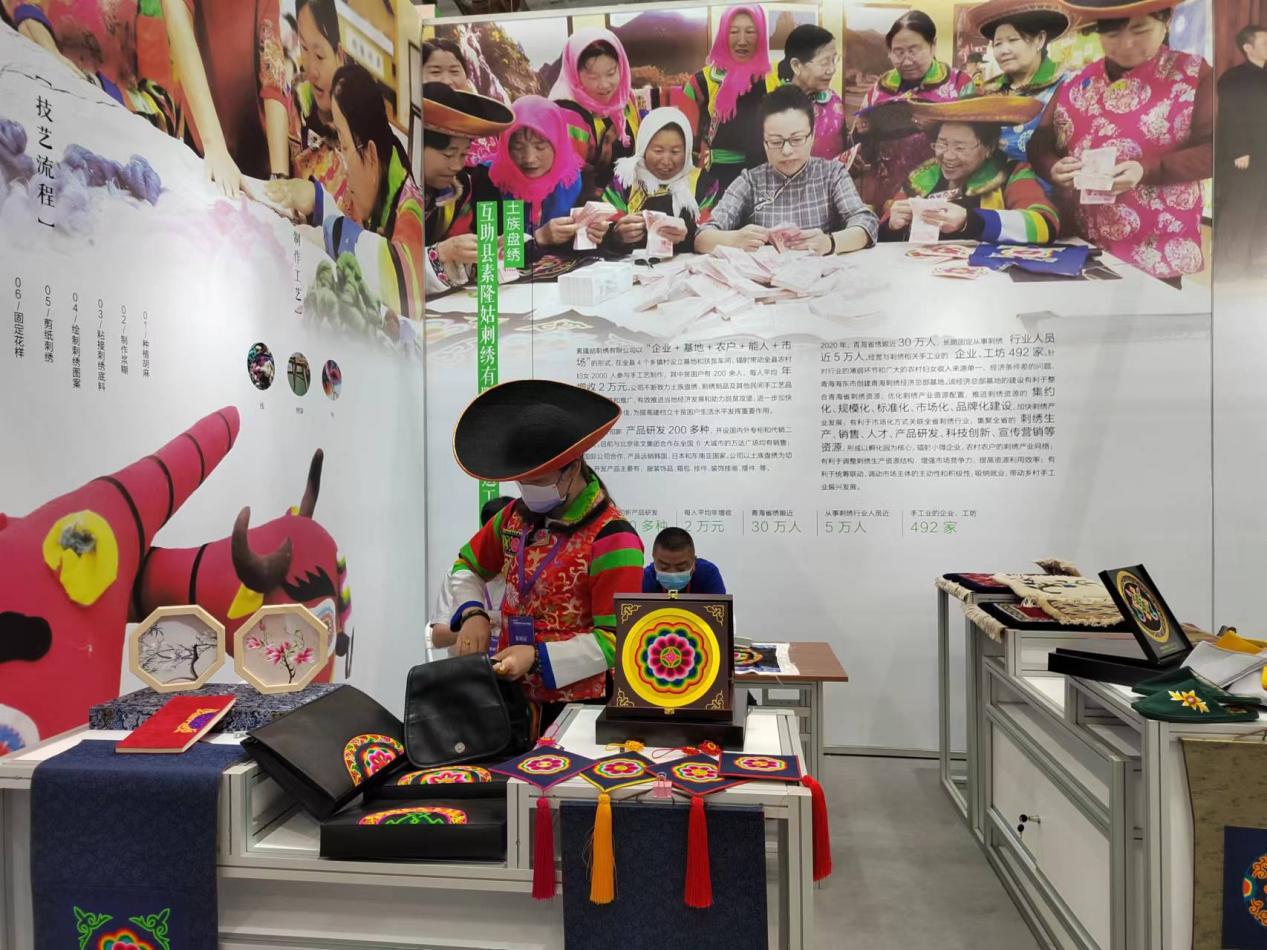 Birch bark, after design, color cutting, peeling and pasting, finally becomes a galloping horse and graceful lady. This is Bailanglin’s birch bark painting. Bark painting not only turns waste into treasure, but also plays an important role in rural revitalization. Xie Caiyun, the leader of Bailanglin Birch Bark Painting Intangible Cultural Heritage Workshop in Aershan, Xing ‘an League, Inner Mongolia, introduced that since 2016, the accumulated dividends of poverty-stricken households who set up files and set up cards are close to 400,000 yuan. 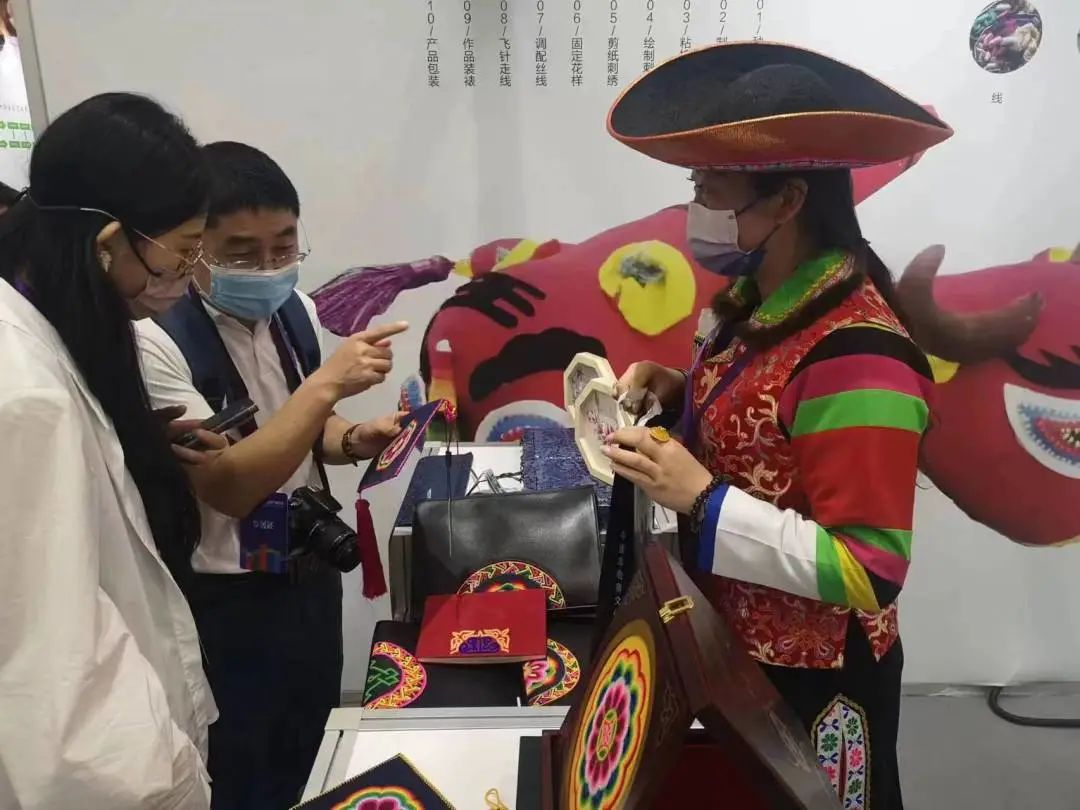 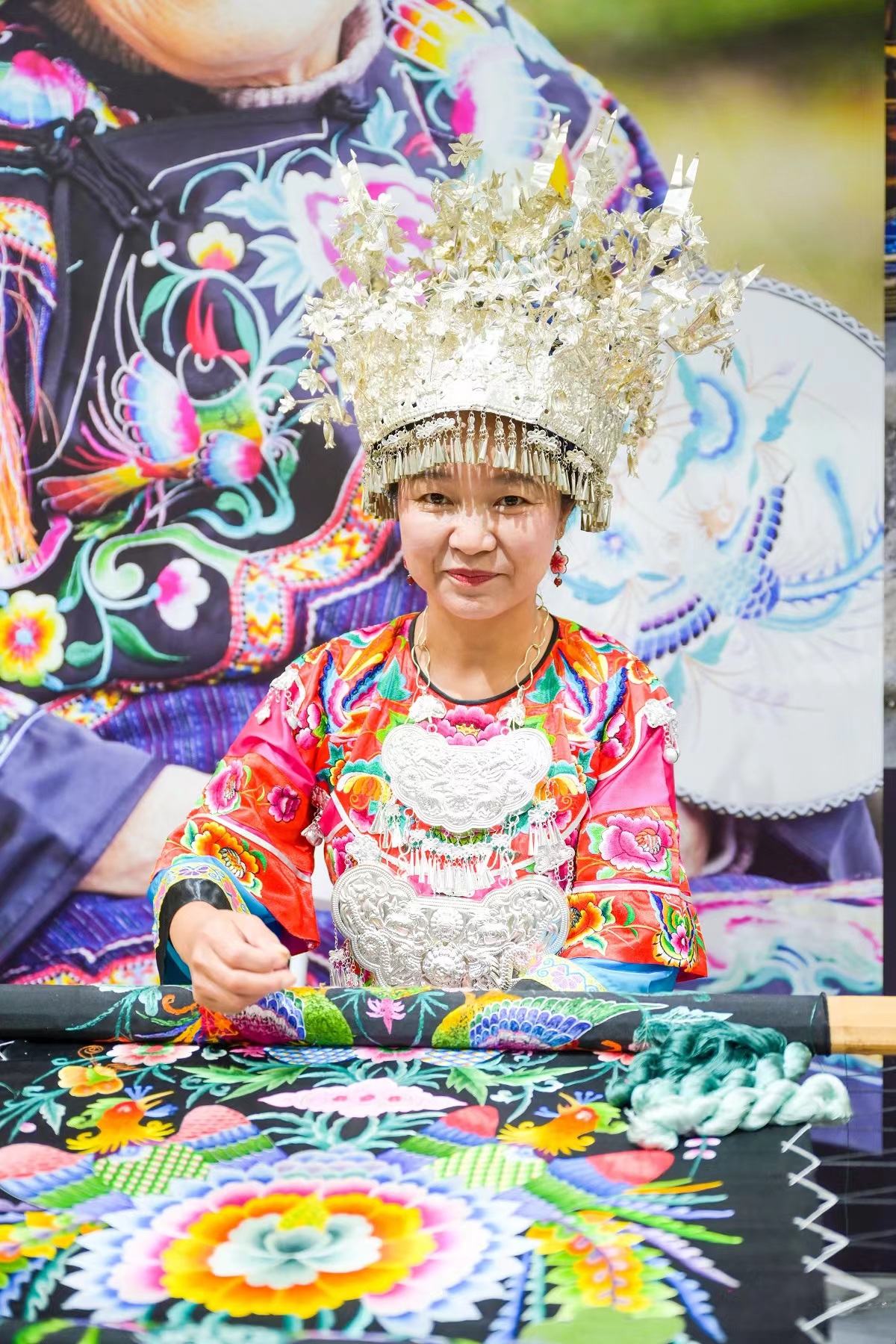 At this Intangible Cultural Heritage Expo, Zisun tea with a long history appeared. Zisun tea is produced in Changxing County, Zhejiang Province, and its name comes from Tea Classics written by Lu Yu, ‘Tea Saint’. Lu Yu called it ‘sweet and fragrant, which is the highest among others’. Zheng Funian, a national intangible cultural heritage inheritor of Zisun tea’s craftsmanship, introduced that Zisun tea has been offering tea to the royal family from the Tang Dynasty to the Ming Dynasty. The Tang poem has one vivid description: ‘In the joyful scene, the new tea baked in Huzhou arrived.’ 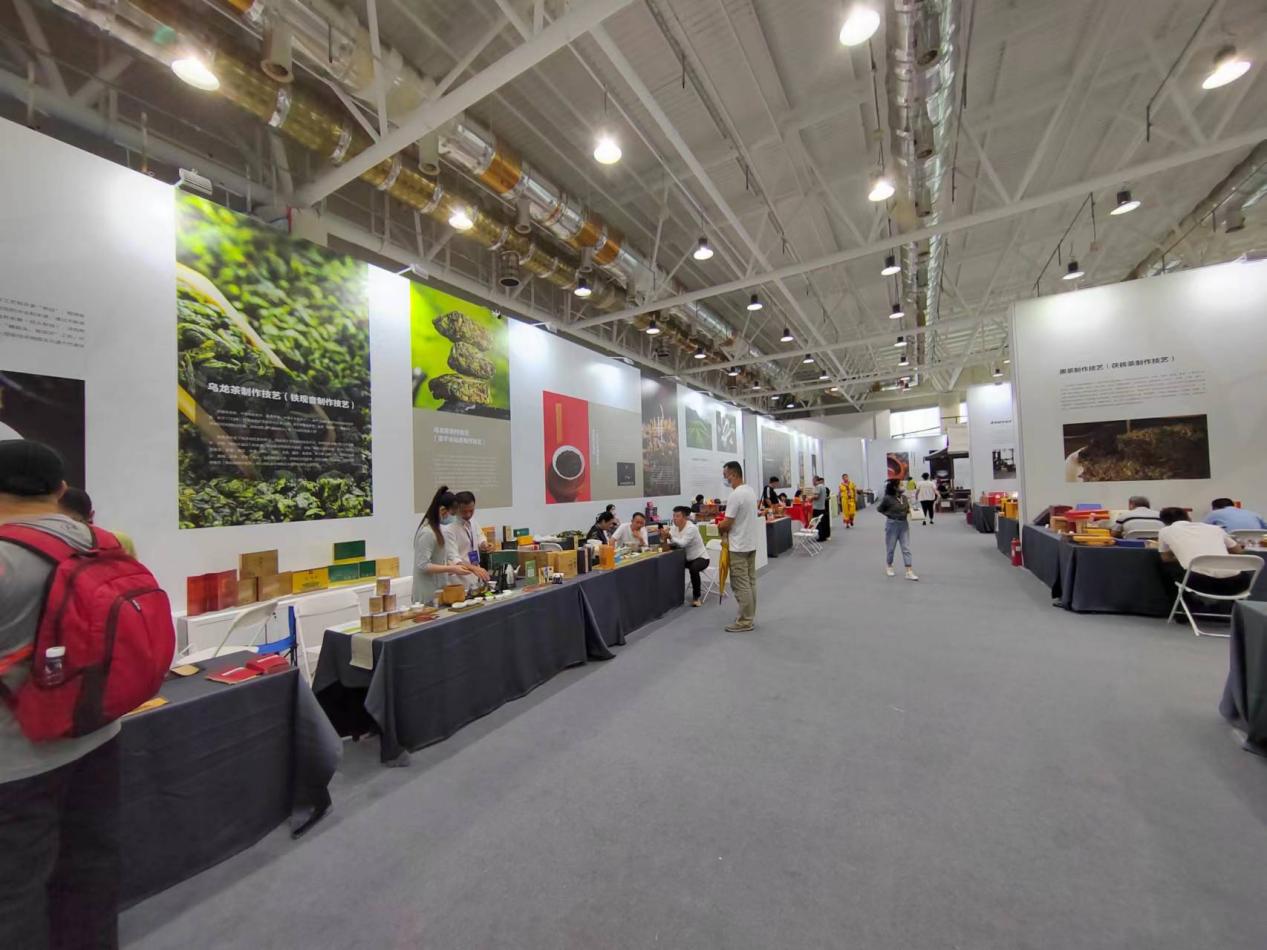 Zheng Funian said that, unlike other fried green teas, Zisun tea adopts the traditional steaming method, with ideal color, rich aroma and long aftertaste. In today’s changing times, Zheng Funian believes that it is a meaningful job to make it by hand in strict accordance with the traditional craft.

At this intangible cultural heritage fair, Chabaixi has attracted people’s attention. Chabaixi is an elegant tea art that prevailed among the literati in Song Dynasty, and then gradually disappeared. Zhang Zhifeng’s descendants said that ‘pointing tea’ was introduced into Japan in the Southern Song Dynasty. In the Southern Song Dynasty, literati pounded tea leaves, poured them into the water, then poured them into boiling water, and stirred them with tea, and bubbles would soon appear. This is a key step in making Chabaixi. To this end, he went to Japan twice to study the method of ‘poinnting tea’, and according to Chinese classics, he groped slowly and finally restored Chabaixi. 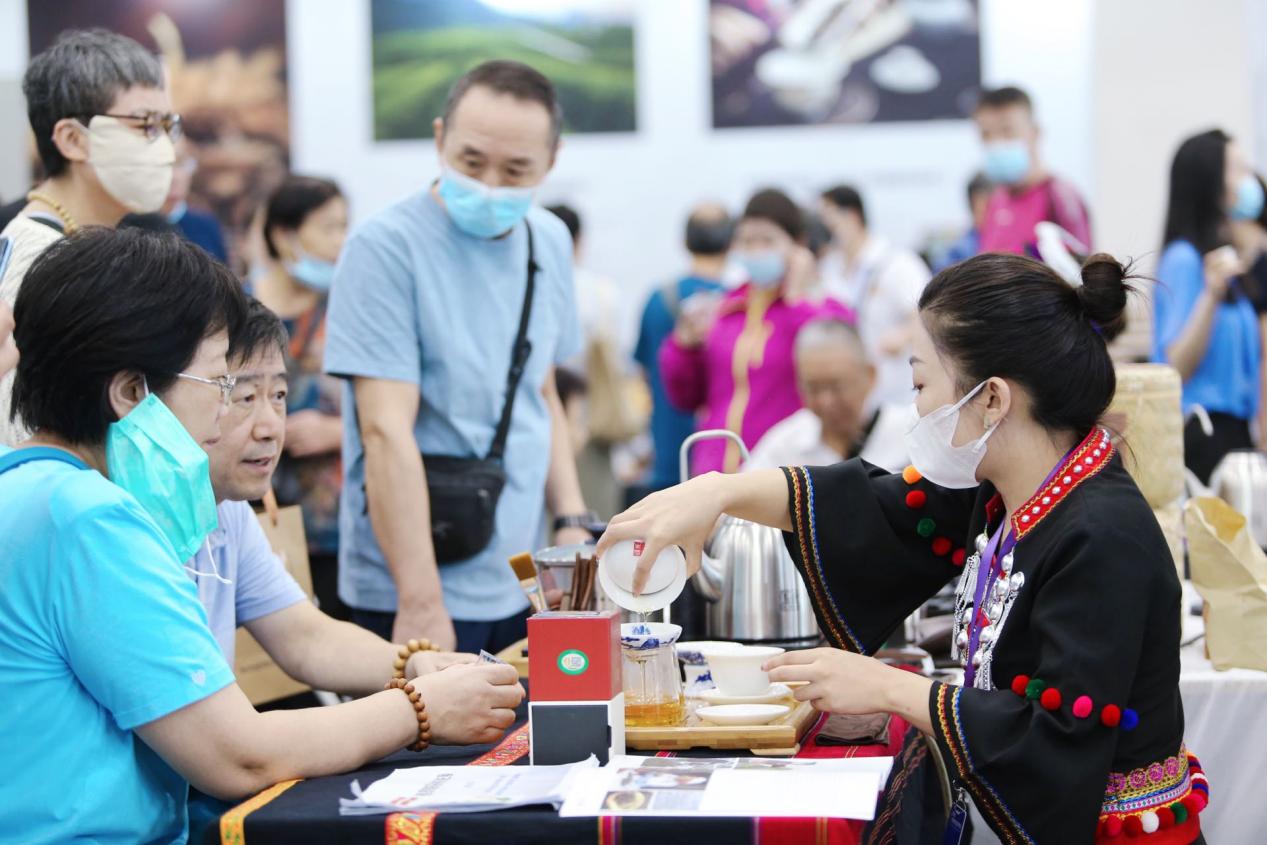 Chinese tea culture has a long history. From raw tea as medicine to cooked tea as food, Chinese people have different experiences with drinking tea. In the exhibition of intangible cultural heritage, in addition to the well-known six kinds of tea: green, cyan, white, red, yellow and black, there are Mongolian milk tea, Deang’s sour tea, Bai’s three tea, Gongcheng’s oil tea and other popular drinking methods in some places, as well as tea customs such as Ganchachang Temple Fair, Jingshan Tea Banquet and Chashan Song, which make people appreciate the profoundness of Chinese tea culture. 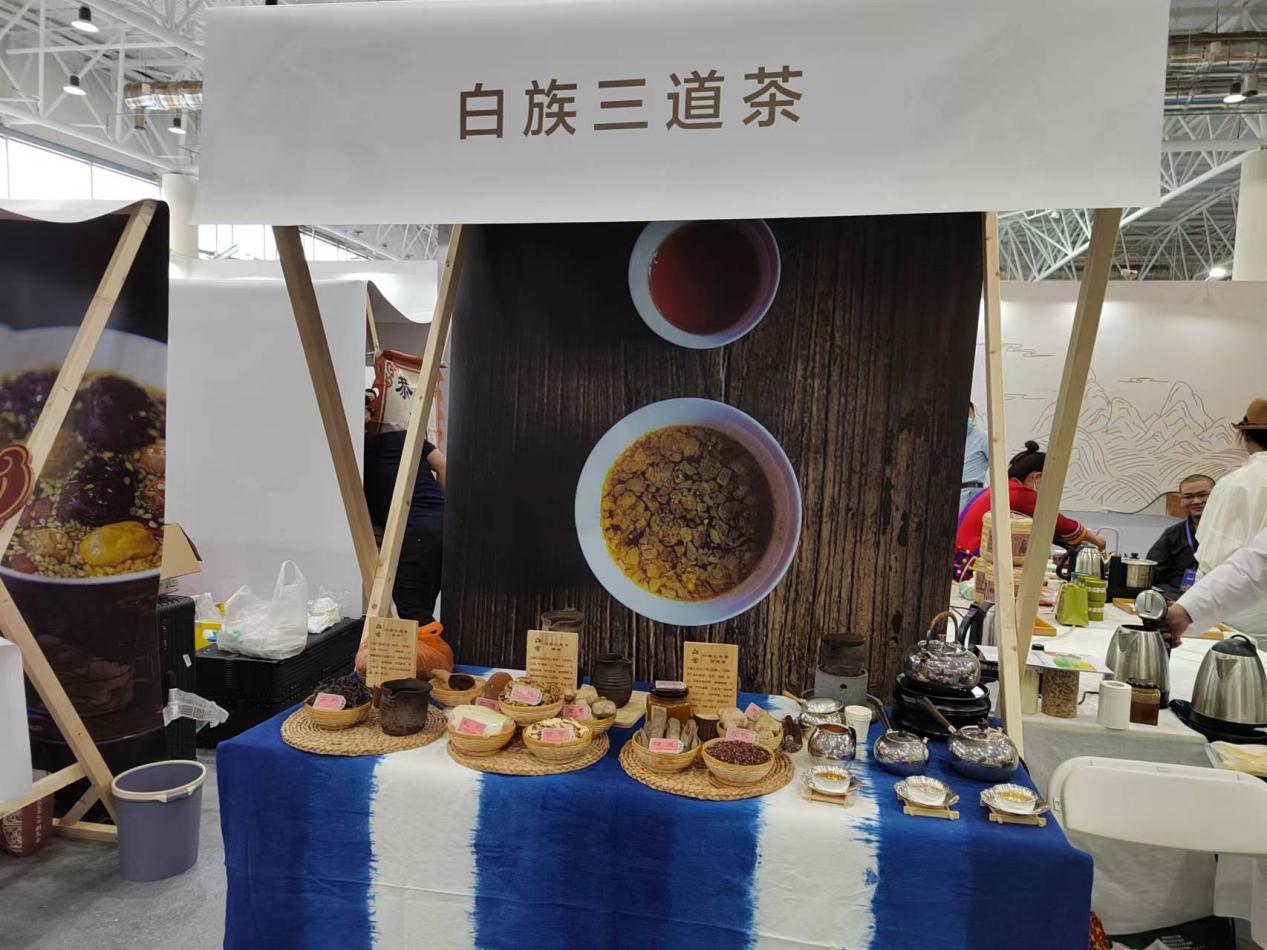 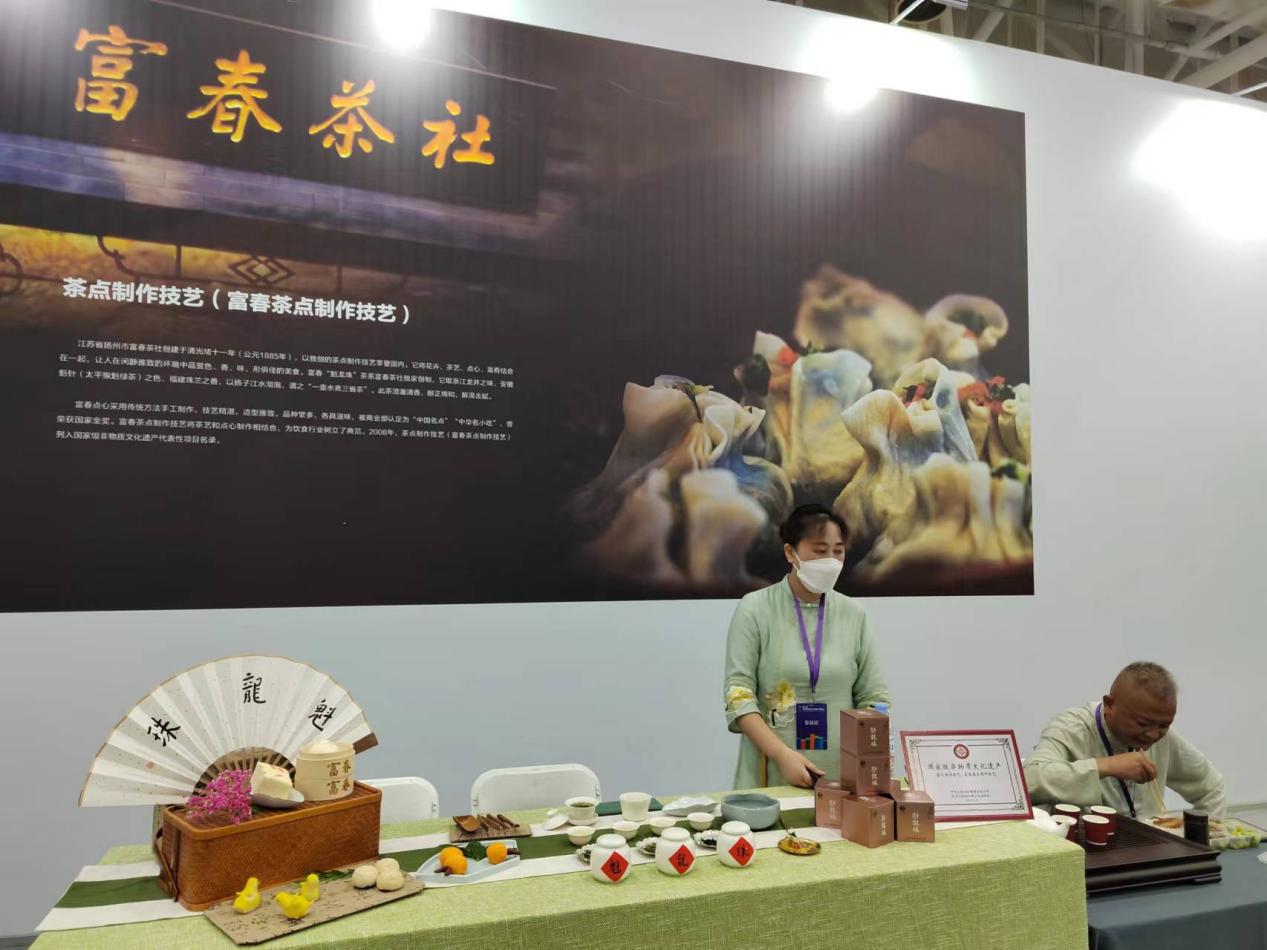 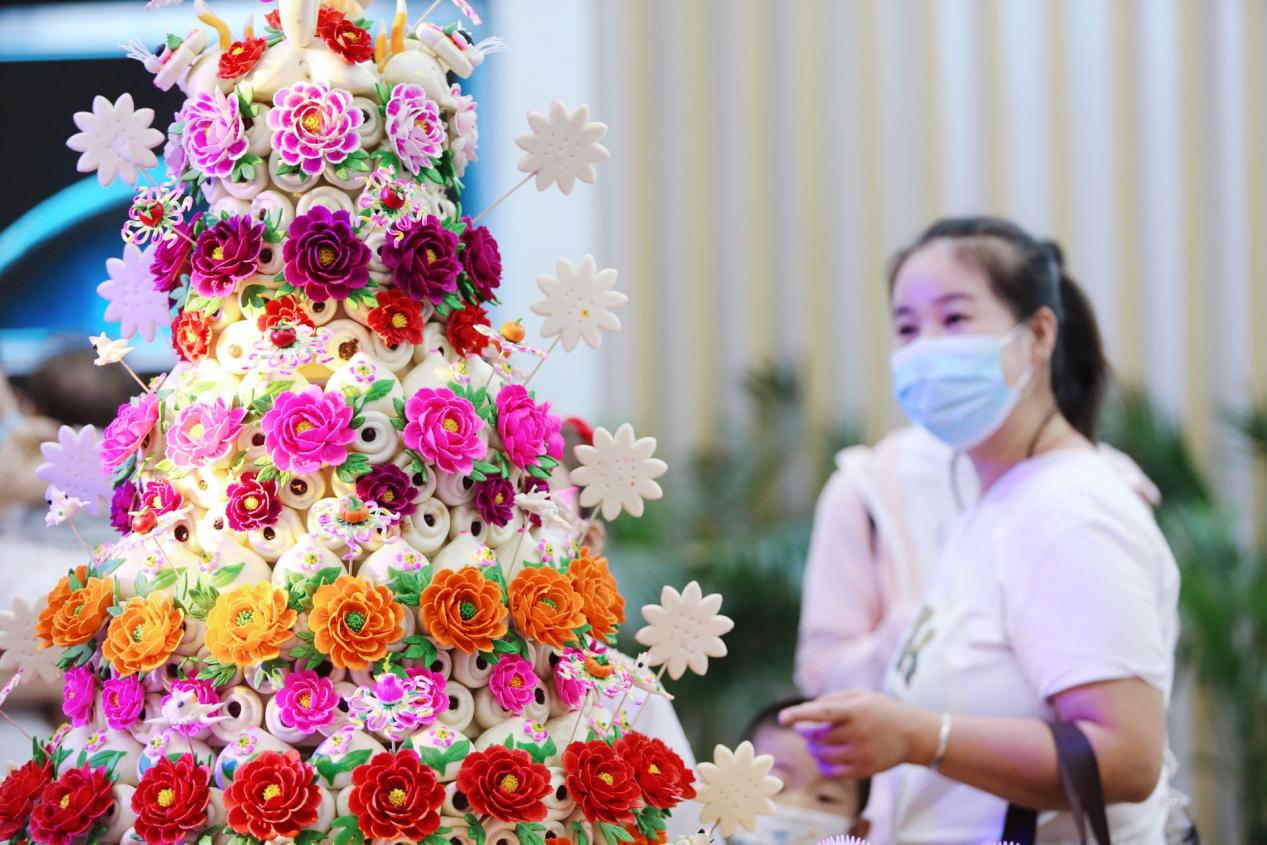 Intangible cultural heritage is both ancient and young. It ‘connects with modern life and blooms charming brilliance’. This year’s China Intangible Cultural Heritage Expo shows a vivid picture of inheriting and carrying forward Chinese excellent traditional culture in a new era. Yimakan, which was once in an endangered state, established a workshop, and its survival status improved obviously; The Grand Canal has a history of one thousand years, and the cities and cultures through which it flows are still full of vitality; Intangible cultural heritage workshops, such as Qixiufang Miao Dress Culture Company in Xiangxi Embroidery Workshop, have enabled rural women to realize that carrying babies, embroidering flowers, and supporting themselves and their families. The culture of a small piece of tea, one element of the daily routine of firewood, rice, oil, salt, soy sauce, vinegar, and tea, carries the dual pursuit of Chinese material and spirit. 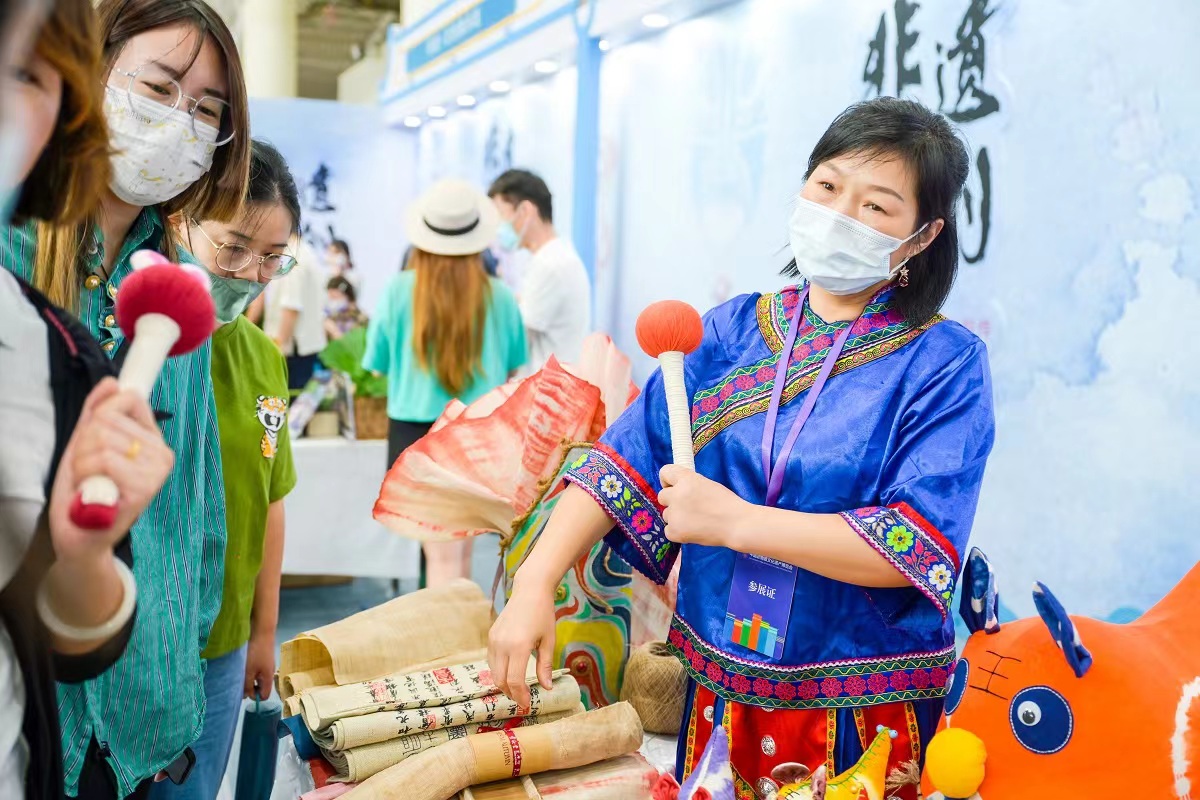 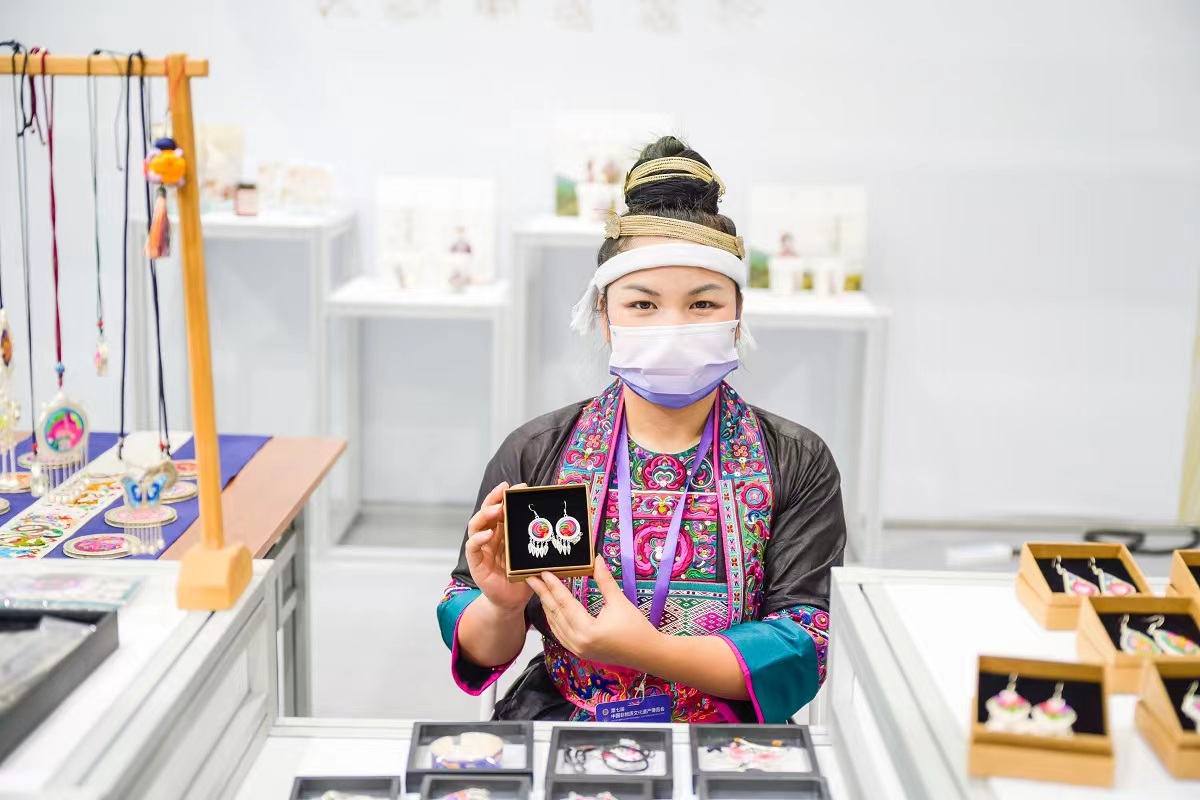 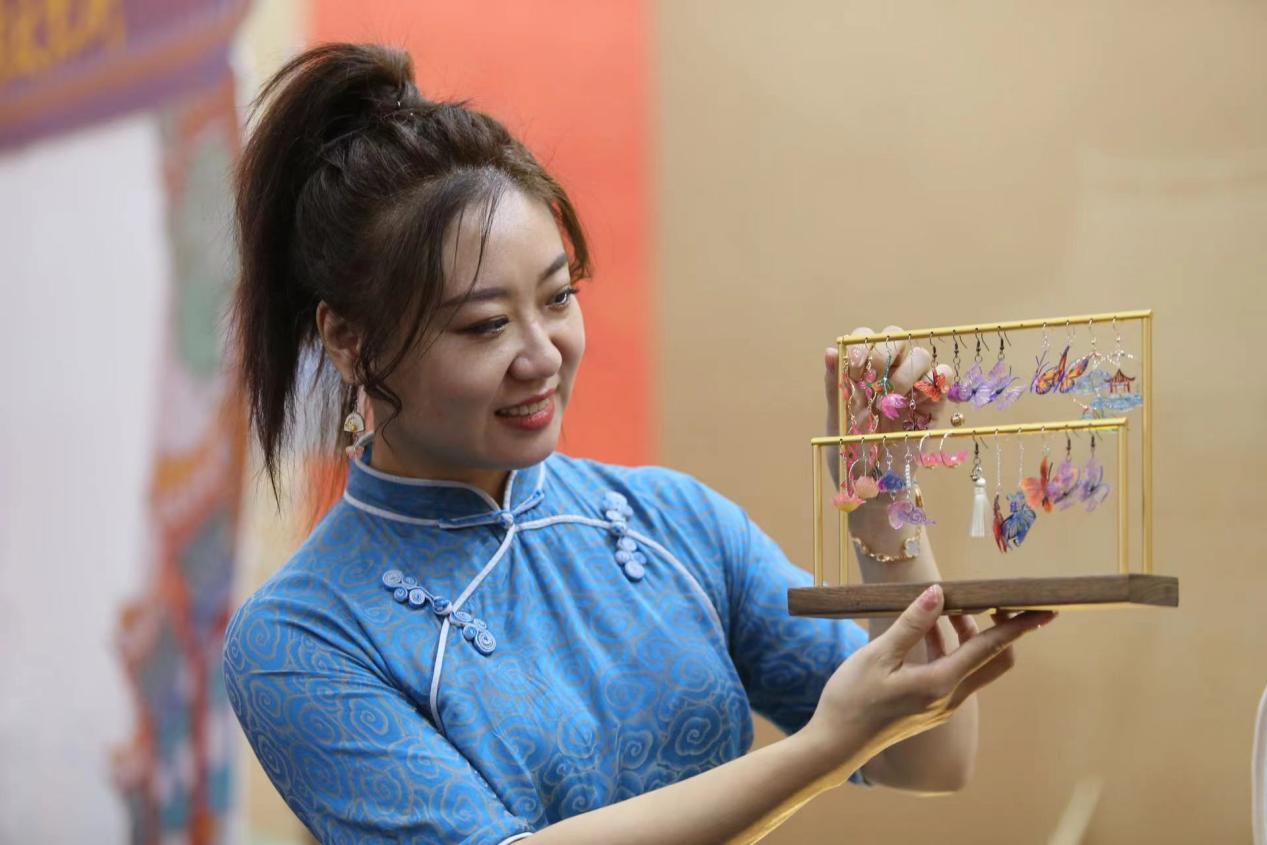