Many Americans view the month of July as a time to celebrate America’s Declaration of Independence and subsequent victory over the British. But July also marks the French national holiday, known as Bastille Day, which is celebrated on July 14. Not long after Americans gained their independence from the British, the French were readying for their own revolution against absolute monarchy during the reign of King Louis XVI.

The French Revolution of 1789 was one of the most spectacularly violent revolutions of the 18th century. In the span of a few decades, France’s government shifted dramatically from an absolute monarchy to a constitutional monarchy, then to a republic, and then, with the rise of Napoleon, to an Empire with incursions southward into Egypt and as far north and east as Moscow. Yet, after all of these far-reaching transformations, the Bourbon monarchy — which began ruling France in the 16th century until being overthrown during the French Revolution — was restored in 1814. 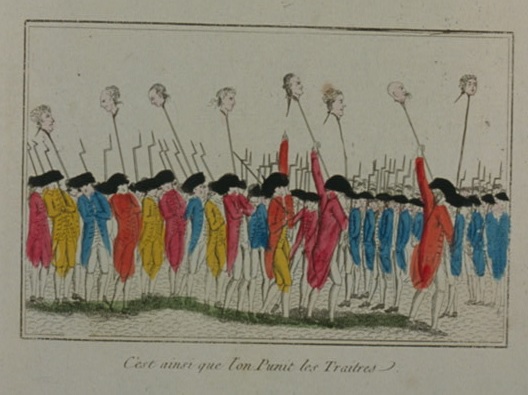 C’est ainsi que l’on punit les traitres [This is how we punish traitors]. Citizens with guns and pikes outside of the Bastille, July 14, 1789, with heads being carried on pikes. From the French Political Cartoon Collection at the Library of Congress.

The spark that ignited this series of radical changes was the storming of the Bastille on July 14, 1789. This is what makes Bastille Day significant and it is the reason why the French continue to celebrate it. To understand Bastille Day, we need only consider the patriotic sentiments that infuse any day of national celebration associated with independence and freedom from oppression. Whereas colonists fought the American Revolutionary War to gain independence from the British motherland, the French revolutionaries struggled in an ideological and popular revolt against their own system of government, one that excluded the vast majority of its subjects. The Bastille was a prison in Paris that housed primarily political prisoners who had voiced dissent against the established system, or ancien régime. The Bastille had long been a symbol of the ruling monarchy’s absolute power. 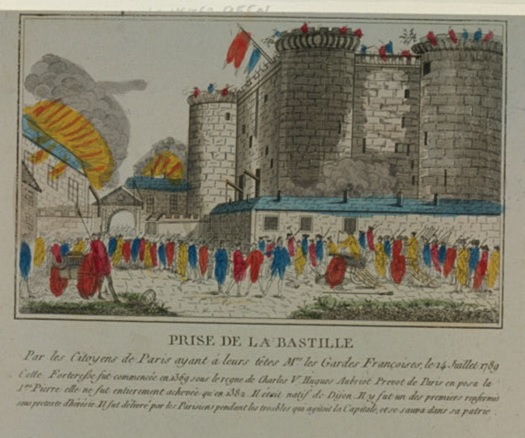 Prise de la Bastille par les Citoyens de Paris… [The taking of the Bastille by the citizens of Paris…]. From the French Political Cartoon Collection at the Library of Congress.

Popular unrest began to build against the ancien régime, which divided society into three categories, or estates: the Clergy, the Nobility, and, representing the vast majority of the population in the Third Estate, the commoners, including the middle class, urban laborers, and peasants. For many in the educated professions this system seemed archaic in a rapidly modernizing world, and they became increasingly critical of the feudal aristocracy and frustrated by their own limited voice as members of the Third Estate. The divergent political, economic and social forces of this time combined to create a volatile environment that was to last for years. 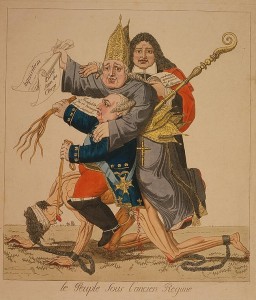 Le peuple sous l’ancien régime [The people under the ancien régime]. The cartoon shows Louis XVI, a bishop, and a member of the aristocracy riding on the back of a man, representing the people, who is blindfolded and in chains and crawling on his hands and knees. From the French Political Cartoon Collection at the Library of Congress.

A vital factor in instilling ideas of government reform in the people was a slight relaxation in royal censorship, which provided a wider venue for political discourse and led to the proliferation of newspapers and pamphlets. One such incendiary newspaper, L’ami du peuple, ou Le publiciste parisien (Friend of the people, or the Parisian reporter), started by the famous French revolutionary figure Jean-Paul Marat, was instrumental in fomenting the forces of popular outrage that fueled the French Revolution. 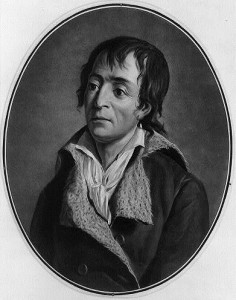 In France, growing discontent and greater access to radical ideas, such as universal suffrage, set the stage for the storming of the Bastille. When King Louis XVI denied the requests of the Third Estate for a greater political voice during the assembly of the three estates, or Estates-General, the commoners met on a nearby tennis court and swore the famous “Tennis Court Oath” vowing that they would not disband until they had written a constitution that protected the rights of the people and ensured them representation in the government. The King ordered the crowd to disperse, and rumors spread that he was calling in 20,000 troops. Panic ensued, and the commoners raided the Bastille looking for ammunition from the arsenal to defend themselves. 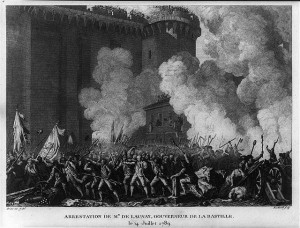 It is worth noting that the diary entry for King Louis XVI on July 14th, 1789 read simply rien or “nothing,” a poignant indication of the disconnect between the King and his subjects. As the Bastille fell, so began the French Revolution, and with it the first steps toward a modern French Republic. To this day, all over France, there are jubilant celebrations every July 14 to mark the democratic traditions and egalitarian spirit of the French people.

The political, economic, and social forces at work before, during, and after the French Revolution have been explored in countless books and other materials. The Library of Congress French collections include an abundance of materials on the French Revolution, including works that can be found in Thomas Jefferson’s personal library. Indeed, the French and American revolutions famously shared many common ideals. For instance, Thomas Jefferson in his capacity as Secretary of State worked closely with Lafayette, a French aristocrat and military officer involved in both the American and French revolutions. Jefferson’s copy of a contemporary compilation of French revolutionary writings, entitled L’ami des patriotes, ou Le défenseur de la Révolution (The patriot’s friend, or the defender of the revolution), is now part of the Jefferson Library exhibit at the Library of Congress. 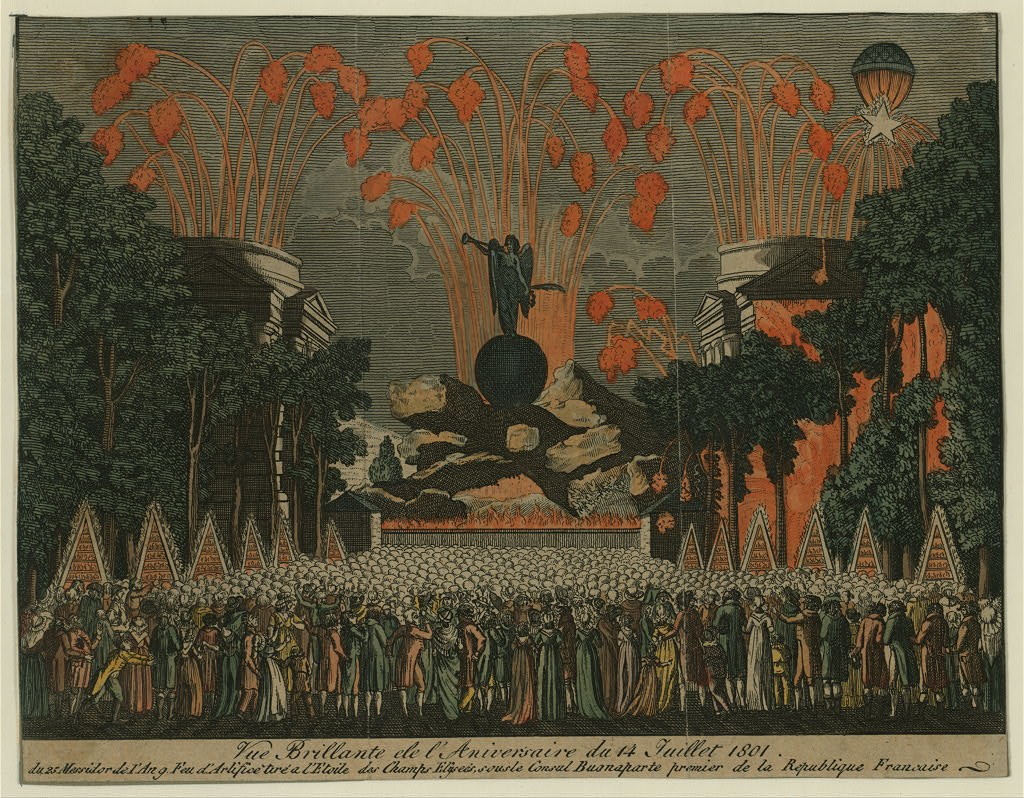