AI and ML: Are They One And The Same? 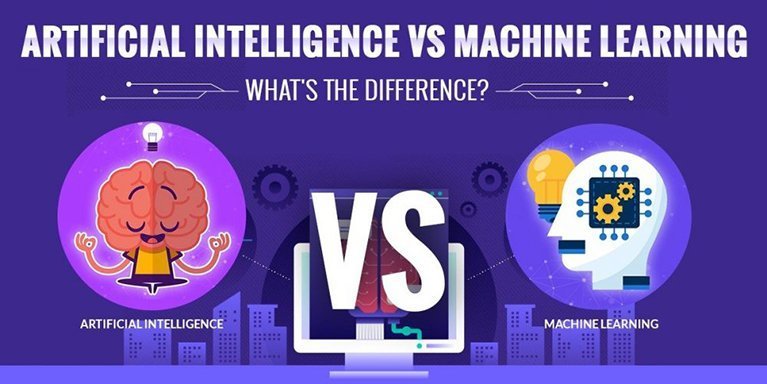 As children we believed in magic, imagined superpowers and a fantasy where robots would one day follow our commands, undertaking our most meager tasks and even help with our homework at the push of a button! But sadly it always seemed that these beliefs, along with the idea of self-driven aero cars and jetpacks, belonged in a future beyond our imagination or in a Hollywood Sci-fi. Would we ever get to experience the future in our lifetime?

But then it arrived! Artificial Intelligence, aka AI, made its debut in real life and became the buzz word of the 21st century, providing us with new ideas to explore and incredible possibilities. And just as we were getting used to AI we were introduced to Futuristic Learning, Deep Learning, NLP and another term we often confuse with AI: Machine Learning (ML). Whew!

Suddenly the future is well and truly here, and it’s hard to keep up with the advancement of these technologies, what each term means and how they relate to one another – particularly when it comes to AI and ML, which are often perceived as interchangeable.

But while AL and ML fall into the same domain, they are significantly different – with each having a specific application and outcome. And as more and more businesses start to question whether these tools may benefit them, we thought it was time to get to the bottom of what makes them different.

It all begins with AI.

According to John McCarthy, one of the Godfathers of AI, “AI is the science and engineering of making intelligent machines”.  We first saw AI in practice mid last century with the Turing Test – a chess experiment designed by mathematician Alan Turing that became the first time a computer defied human intelligence by defeating a human player in the game.

When looking at how ML fits in with AI, AI is the super set while ML is its subset. The latter is more dominantly used in areas with huge data sets encompassing the ‘3 Vs’ of Big Data: Volume, Velocity and Variety. AI, on the other hand, covers not only ML but also other branches including Natural Language Processing, Deep Learning, Computer Vision and Speech Recognition. Nevertheless, both AI and ML have one common goal: to achieve intelligence on a scale that defeats natural human intelligence.

Everything that has a smart system and is taking decisions based on inputted data can be considered an AI-driven machine – be it a car, door lock or even a refrigerator. AI can consist of everything from Good Old-Fashioned AI (GOFAI) all the way up to newer and advanced technologies like Deep Learning. Whenever a machine can “intelligently” complete a set of tasks based on some algorithms without human intervention, it is termed as artificial intelligence – for example identifying a series of steps to win a game or answer a generic question set by itself. AI machines are generally classified into three groups: Narrow, General and Super:

This brings us to the fact that we need more computing resources to handle the corpus of data which unfortunately is limited. Therefore, we need to work through a rule-based programming – hence the shift away from AI towards ML.

The rise of the machines.

A subset of AI, ML refers to machines that learn on account of some sort of prior knowledge – hence making them smarter and more likely to give results close to human intelligence. ML systems train a machine how to learn and apply decision making when encountered with new situations and are designed to get smarter over time. What started as AI is now leading major devices to adopt ML due to its likelihood to yield better results, and with the emergence of Big Data ML has gained speed and is now utilized by some of the world’s most powerful tech companies including Google, IBM, Baidu, Microsoft and Apple.

Tom M. Mitchell, a Computer Scientist and machine learning pioneer, has defined ML as: “The study of computer algorithms that allow computer programs to automatically improve through experience.” It focuses on making a machine or computer “learn” by providing it with a set of data and some predictions. Data is the fuel for machine learning and is to ML what code is to traditional computing.

Training a ML model requires giving algorithms a chunk of Big Data and one of the many learning models in order to extract processed, meaningful information – thus automating the process. It works for specific domains where we are creating models to detect or separate items, for example one fruit from a given set of fruits. Another example of its use is in manufacturing, whereby if you give input to a ML program with a large dataset of pictures of defects, along with their description, it should have the capacity to automize the data analysis of pictures at a later point in time. The model can find similar patterns in pictures with indicators as to where the defect might be by analysing the diverse dataset.

ML can be divided into three types: Supervised, Unsupervised and Reinforcement Learning.

Today we see AI applied to many areas of our daily lives – but it’s not as obvious to ‘see’ ML. How often do you access Google Home, Siri or Alexa? These are AI interactions between humans and machines – but it’s what’s behind these interactions that’s really interesting! They’re powered by training models and prediction systems of ML used by Netflix, YouTube, Facebook and Amazon.

ML has certainly been seized by marketers due to the opportunities afforded from being able to understand audiences at a micro level – but it’s also a term misused more than it should be, with the assumption that every AI system is also ML. If you compare AI and ML, you can clearly arrive at the conclusion that everything that uses human intelligence as a tool to mimic intelligent behaviors by machines can be termed as AI. But for that operation to be a ML tool too, one needs to use modeling techniques and a Big Data set to apply these techniques to.

By understanding the key differences between AI and ML and the different opportunities each provides, businesses will have a better understanding of how – if at all – these tools can be applied in their operations. We hope this article has provided you with a clearer idea of how AI and ML work separately and together, but if you have any questions at all – please don’t hesitate to get in touch with our friendly team[link to https://www.makeen.io/contact-us/].

AI and ML: Are They One And The Same?