The real estate sector is one of the most globally recognised sectors. In India, real estate is the second largest employer after agriculture and is slated to grow at 30 per cent over the next decade.

Choosing a Career Path? These Are the…
The Canadian International AutoShow i…
The Museum of Illusions at World of I…
Metro Cmg ft Trevor Smith & Mas Musiq…
Barcelona legend Ronaldinho predicts …

It is expected that this sector will incur more non-resident Indian (NRI) investments in both the short term and the long term. Bengaluru is expected to be the most favoured property investment destination for NRIs, followed by Ahmedabad, Pune, Chennai, Goa, Delhi and Dehradun.

India’s rank in the Global House Price Index has jumped 13* spots to reach the ninth position among 55 international markets, on the back of increasing prices in mainstream residential sector.

The Indian real estate market is expected to touch US$ 180 billion by 2020. The housing sector alone contributes 5-6 per cent to the country’s Gross Domestic Product (GDP).

In the period FY2008-2020, the market size of this sector is expected to increase at a Compound Annual Growth Rate (CAGR) of 11.2 per cent. Retail, hospitality and commercial real estate are also growing significantly, providing the much-needed infrastructure for India’s growing needs.

A total of 2,17,900 new houses in six Indian states were sanctioned by the Ministry of Housing and Urban Affairs, Government of India under the Pradhan Mantri Awas Yojana (Urban) (PMAY) to push affordable housing in the urban areas of the country.

Bangalore is one of the promising markets for the investors because of the infrastructural development happening in full swing one of the major contribution after the IT industry is the Metro.

Bangalore metro has contributed towards the growth of Real estate indicating progressive impact on micro markets near metro lanes. Connecting not just the major locations in Bangalore city but also the IT-Parks, Namma metro is the second longest operational metro network after Delhi metro, easing people in hassle free and time saving commute; this is drawing the major attention and interest of the customers.

The property prices have increased around a minimum of 12% up to 20% compared to last few years expected to grow even up to 30% by the time phase 2 is completed, the major changes happening in East, north and south Bangalore.

Namma Metro Development and the properties in and around the Metro Corridor: 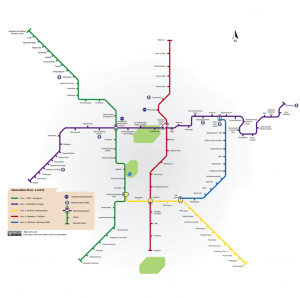 The development of Bangalore metro is happening in phases, as of now Phase 1 is operational that is Purple line: Baiyappanahalli to Mysore road. Below is a list of projects that are close to Metro stations across different lines and have either seen appreciation or are expected to yield good returns for investors.

Phase 2 includes the extension of the two Phase 1 corridors, as well as the construction of two new lines. The south-end of the Green Line will be extended from Yelachenahalli to Anjanapura Township along the Kanakapura Road and the north-end from Hesarghatta Cross to Bangalore International Exhibition Center (BIEC) on Tumkur Road (NH-4). The east-end of the Purple Line will be extended from Baiyappanahalli to Whitefield and the west-end from Mysore Road to Kengeri.

Land values are inversely related to the distance of land parcels from the metro station. Ordinarily, land values decrease along with the distance from Metro stations. Technically, a Metro exerts an influence buffer of up to 1 km radius, with the maximum influence being within 500 meters. Typically in a city, the market value of properties will increase by more than 50% over the prevalent values after the launch of metro rail, depending upon the location, land use, and the micro-market’s overall potential.

The fully operational 18-km line has kicked up realty prices along its route. 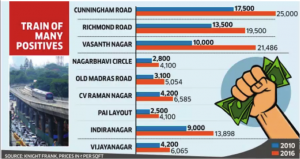 Most areas along Kanakapura Road, including Basavanagudi, Banashankari, J.P. Nagar, Jaraganahalli, Yelachenahalli and pockets of Vasanthapura, Uttarahalli and ISRO Layout are already seeing 10 per cent increase in rentals. In ISRO Layout, a three-bedroom unit saw a steep rise in rent to Rs. 30,000, said to be a 20 per cent higher compared to the last quarter. Near Nayandahalli, residential localities such as Binny Layout, Attiguppe, Bapuji Layout, and Deepanjalinagar are also seeing increased rentals. Property rates too are expected to increase by 10 per cent in the next three months

This post first appeared on Budigere Cross: Location Analysis, please read the originial post: here
People also like
Choosing a Career Path? These Are the Big Earners
The Canadian International AutoShow is set to return in February 2023 - @AutoShowCanada
The Museum of Illusions at World of Illusions Los Angeles
Metro Cmg ft Trevor Smith & Mas Musiq – Where The Danger Is
Barcelona legend Ronaldinho predicts where Arsenal will finish in the Premier League this season
Trailblazers New York: Cannabis And Psychedelic Leaders Push Industry Frontiers In The Urban Jungle
Safest and Most Affordable Places to Live in 2022
Daily Sedecordle August 6 2022 Answers
19 Epic Beard Styles Without Mustache (Styling Guide)
A Model of a Powerful Transportation Country: The Epitome of the Rapid Development of China’s Transportation Road Network Today in Huli District, Xiamen City