Ralph Ellison Quotes on Going from Invisible to Visible These Ralph Ellison quotes will inspire you to pursue greatness, regardless of where you’re coming from.

Ralph Waldo Ellison was an American novelist, literary critic, and scholar. He is known for producing some of the most highly regarded works in American literature.

Born in Oklahoma City, Oklahoma on March 1, 1914, Ellison and his family had to deal with difficult times in his childhood. He lost his father at the age of 3, which left him and his family struggling financially.

Ellison studied music in Alabama’s Tuskegee Institute in 1933 but moved to New York City in 1936 after his third year because of financial issues. While at New York, he met writer Richard Wright who pointed him in the direction of writing.

Ellison’s novel, Invisible Man, won the National Book Award in 1953 and established him as one of the most prominent American authors of the twentieth century. His other works include Going to the Territory and Shadow and Act, a collection of political, social and critical essays.

In recognition of his works, Ellison received numerous awards, including two President’s Medals, a State Medal from France, and an honorary Doctorate from Harvard University.

Ellison died on April 16, 1994 in New York City. His unfinished novel, Juneteenth, was published posthumously in 1999.

Despite coming from a humble background, Ellison managed to establish himself as a serious and important literary figure. In his honor, below is our collection of inspirational, wise, and thought-provoking Ralph Ellison Quotes.

Ralph Ellison quotes on going from invisible to visible

2. “Life is to be lived, not controlled, and humanity is won by continuing to play in face of certain defeat.” – Ralph Ellison

3. “If you can show me how I can cling to that which is real to me, while teaching me a way into the larger society, then and only then will I drop my defenses and hostility, and I will sing your praises and help you to make the desert bear fruit.” – Ralph Ellison

4. “Power doesn’t have to show off. Power is confident, self-assuring, self-starting and self-stopping, self-warming and self-justifying. When you have it, you know it.” – Ralph Ellison 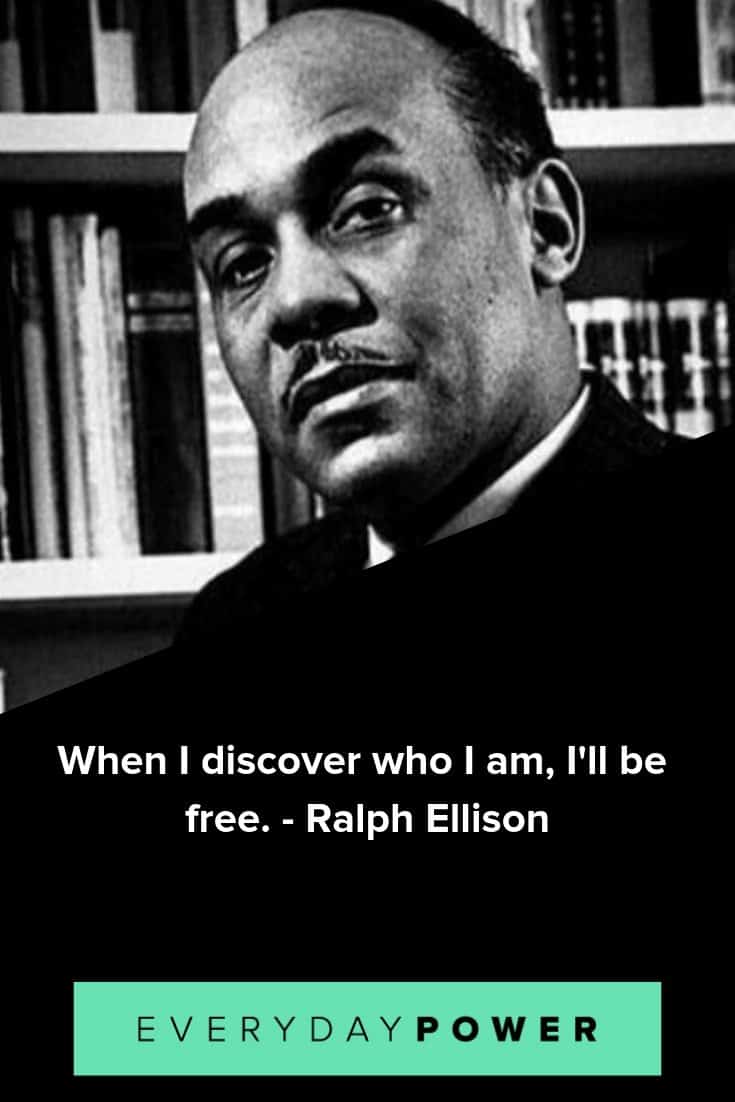 6. “Light confirms my reality, gives birth to my form…without light I am not only invisible but formless as well; and to be unaware of one’s form is to live a death…the truth is the light and light is the truth.” – Ralph Ellison

7. “In order to travel far you have to be detached.” – Ralph Ellison

8. “The world is a possibility if only you’ll discover it.” – Ralph Ellison

9. “It took me a long time and much painful boomeranging of my expectations to achieve a realization everyone else appears to have been born with: That I am nobody but myself.” – Ralph Ellison

10. “I feel the need to reaffirm all of it, the whole unhappy territory and all the things loved and unlovable in it, for it is all part of me.” – Ralph Ellison

11. “Man’s hope can paint a purple picture, can transform a soaring vulture into a noble eagle or moaning dove.” – Ralph Ellison

13. “The world is just as concrete, ornery, vile, and sublimely wonderful as before, only now I better understand my relation to it and it to me.” – Ralph Ellison

14. “Having tried to give pattern to the chaos which lives within the pattern of your certainties, I must come out, I must emerge.” – Ralph Ellison

15. “I don’t allow anonymous people to give me a sense of my worth.” – Ralph Ellison 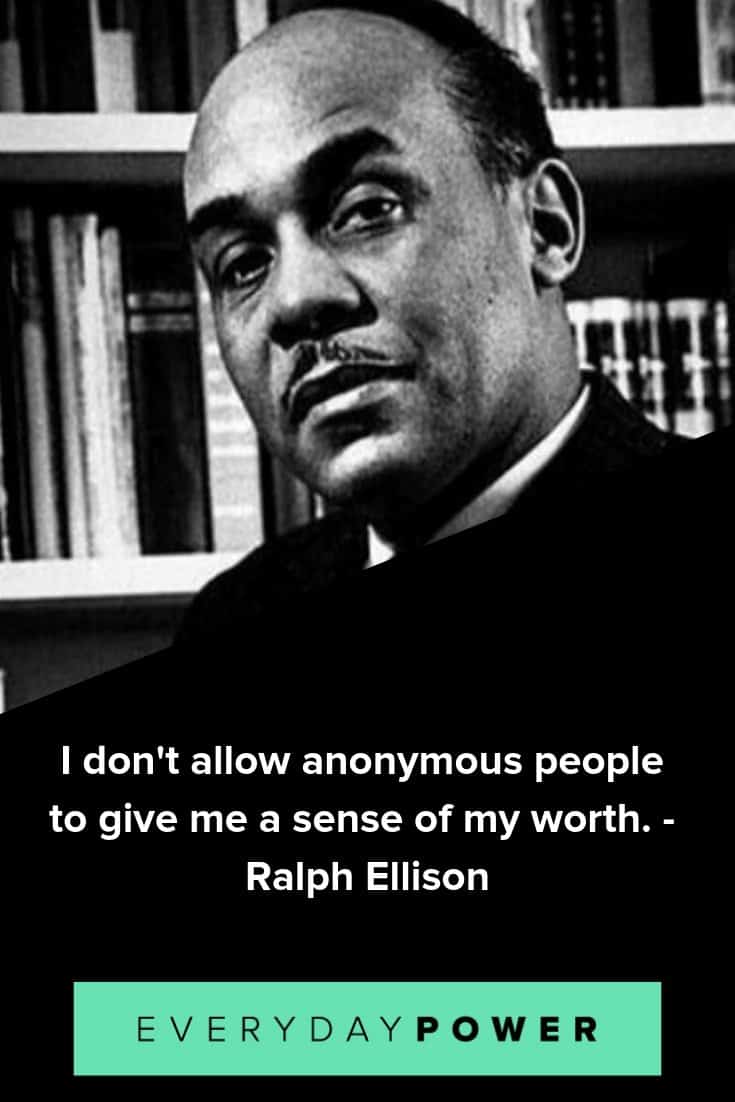 16. “But what a feeling can come over a man just from seeing the things he believes in and hopes for symbolized in the concrete form of a man. In something that gives a focus to all the other things he knows to be real. Something that makes unseen things manifest and allows him to come to his hopes and dreams through his outer eye and through the touch and feel of his natural hand.” – Ralph Ellison

17. “And the mind that has conceived a plan of living must never lose sight of the chaos against which that pattern was conceived. That goes for societies as well as for individuals.” – Ralph Ellison

18. “If only all the contradictory voices shouting in my head would calm down and sing a song in unison, whatever it was I wouldn’t care as long as they sang without dissonance.” – Ralph Ellison

19. “By and large, the critics and readers gave me an affirmed sense of my identity as a writer. You might know this within yourself, but to have it affirmed by others is of utmost importance. Writing is, after all, a form of communication.” – Ralph Ellison

20. “Our task, then always, is to challenge the apparent forms of reality-that is, the fixed manner and values of the few, and to struggle with it until it reveals its mad, vari-implicated chaos, its false face, and so on until it surrenders its insight, its truth.” – Ralph Ellison

21. “Meaning grows in the mind, but the shape and form of the act remains.” – Ralph Ellison

22. “The thing to do is to exploit the meaning of the life you have.” – Ralph Ellison

23. “The end is in the beginning and lies far ahead.” – Ralph Ellison 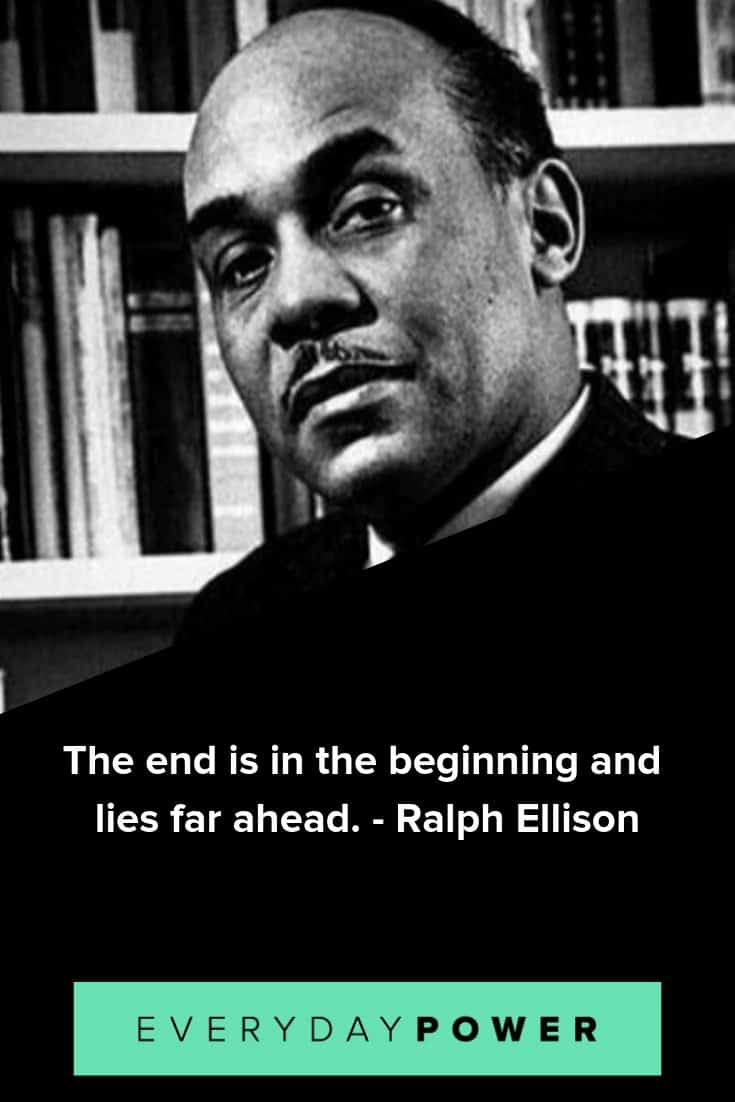 25. “Perhaps simple to be known, to be looked upon by so many people, to be the focal point of so many concentrating eyes, perhaps this was enough to make one different; enough to transform one into something else, someone else; just as by becoming an increasingly larger boy one became one day a man.”  – Ralph Ellison

Which of these Ralph Ellison quotes was your favorite?

Ralph Ellison was one of the most important authors of the twentieth century. He will always be remembered for the impact he made on American literature.

Ellison also distinguished himself from many other black authors of his time. Unlike many in the black American literary community, he believed that the identity of the African American community was inherently part of the history and identity of the US as a whole.

Did you enjoy these Ralph Ellison quotes? Which of the quotes was your favorite? Let us know in the comment section below. Also, don’t forget to share with your friends and followers.

The post Ralph Ellison Quotes on Going from Invisible to Visible appeared first on Everyday Power.

Ralph Ellison Quotes on Going from Invisible to Visible