Stevie Nicks Quotes From the Singer/Songwriter

If you like her music, you’ll enjoy these Stevie Nicks quotes.

Stevie Nicks was born Stephanie Nicks. She’s famously known both for her solo music career as well as the work she did with Fleetwood Mac. Throughout her long career, she has maintained the same type of stage appearance that people have come to expect. 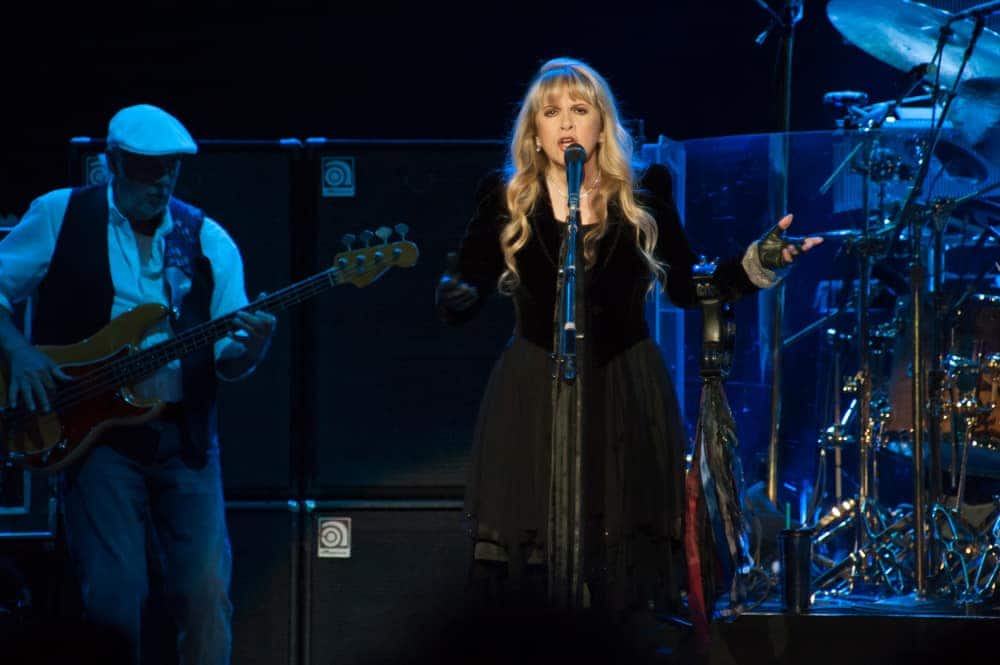 She shares that her lyrics have often come after heartbreak and loss, which is the direction much of her music takes as well. However, she has uplifting messages to share and promotes confidence for girls.

Check out these Stevie Nicks quotes to see what you think.

Don’t forget to also read these Lady Gaga quotes on love, being yourself and fame.

1. “Little girls think it’s necessary to put all their business on MySpace and Facebook, and I think it’s a shame… I’m all about mystery.” – Stevie Nicks

2. “I think they all went too far. Their jeans got too low, their tops got too see-through. Personally, I think that sexy is keeping yourself mysterious. I’m really an old-fashioned girl, and I think I’m totally sexy.” – Stevie Nicks

4. “Most women would not be happy being me. People say, ‘But you’re alone.’ But I don’t feel alone. I feel very un-alone.” – Stevie Nicks

5. “Being able to take care of myself is something that my mom really instilled in me.” – Stevie Nicks

7. “I said, ‘Instead of going in the direction that a lot of the women singers are going in [revealing], I’ll be very, very sexy under 18 pounds of chiffon and lace and velvet…I will have mystique.” – Stevie Nicks

8. “You know, the man of my dreams might walk round the corner tomorrow. I’m older and wiser and I think I’d make a great girlfriend. I live in the realm of romantic possibility.” – Stevie Nicks

10. “Prince and I were just friends. I think he would have been happy to have had a relationship.” – Stevie Nicks

11. “Singing is the love of my life, but I was ready to give it all up because I couldn’t handle people talking about how fat I was.” – Stevie Nicks

13. “Men are going to go out on the road and they’re going to find other women. So if you really want to save yourself a whole lot of heartache, do not fall in love with somebody in a band. Just don’t.” – Stevie Nicks

14. “For 70 nights, right across America, I’ve been getting out there with two ex-lovers and we’ve been playing songs which are so specific about each of us, you just wouldn’t know. We’re friends now but we can’t forget what happened between us.” – Stevie Nicks

15. “We don’t need to have somebody that’s gonna make sure they pay for our market bills. It’s like we have only one reason to love and that is for the real idea of love.” – Stevie Nicks

17. “When you’re in a band with three writers, three great writers, you only get one-third of the writer thing. So that’s the whole reason that I did a solo career. And that’s, you know when I told Fleetwood Mac I was going to do that, they were, of course, terrified that I would do that record and then that I would quit.” – Stevie Nicks

18. “Everything on this record is what I really wanted to say, and I’m back to being the poet I always thought I was.” – Stevie Nicks

20. “I preferred not to be laden down with a big instrument. If you’re behind a guitar, you get used to being behind a guitar, and you don’t really perform because you can’t. I wanted to be able to just hold on to the mike and sing.” – Stevie Nicks

21. “I was not going to be a stupid girl singer. I was going to be way more than that.” – Stevie Nicks

22. “What a writer wants to do is put stuff out there and make people mull it over in their minds until suddenly it’s something that’s way more important than turning on the stereo.” – Stevie Nicks

23. “It was my 16th birthday – my mom and dad gave me my Goya classical guitar that day. I sat down, wrote this song, and I just knew that that was the only thing I could ever really do – write songs and sing them to people.” – Stevie Nicks

24. “When you’re rich and famous you are the dominant force in a relationship, even if you try hard not to be. I’ve talked of sacrificing everything for Fleetwood Mac, but I realize now that it is simply the only thing I’ve ever wanted to do.” – Stevie Nicks

26. “It’s really hard when you break up with somebody, or somebody breaks up with you, and you’re in this band; guess who you have to see in the next day in the hotel in the breakfast room? That person.” – Stevie Nicks

27. “I wouldn’t like to be in movies. Movie people are strange. They live a different life than musicians do.” – Stevie Nicks

28. “Even in my really bad, drugged-out days, I didn’t go away. I still toured, still did interviews. I never gave up the fight. That’s why I’m who I am today because I didn’t leave. And I think I made the right choice.” – Stevie Nicks

29. “I am pretty fearless, and you know why? Because I don’t handle fear very well; I’m not a good terrified person.” – Stevie Nicks

30. “Your graciousness is what carries you. It isn’t how old you are, how young you are, how beautiful you are, or how short your skirt is. What it is, is what comes out of your heart. If you are gracious, you have won the game.” – Stevie Nicks

32. “I’ve learned as time passes, all the things that you’re afraid of will come and they will go, and you’ll be alright.” – Stevie Nicks

34. “My other family is Fleetwood Mac. I don’t need the money, but there’s an emotional need for me to go on the road again. There’s a love there; we’re a band of brothers” – Stevie Nicks

35. “I hated Chris, my brother. I would pull his hair and kick him, until one day my father gave him permission to fight back. I’ll be apologizing to him for the rest of my life.” – Stevie Nicks

36. “I made a conscious decision that I was not going to have children. I didn’t want others raising them, and looking after them myself would get in the way of being a musician and writer.” – Stevie Nicks

37. “But for me, I knew that if I had a baby, I would have to take care of that baby, and I wouldn’t have been happy with a nanny taking care of my baby and walking into the room and having my child run across the room to another woman.” – Stevie Nicks

Stevie Nicks quotes from her lyrics

38. “Well, I’ve been afraid of changing, ‘Cause I’ve built my life around you.” – Stevie Nicks

40. “I can see we’re thinkin’ bout the same thing, And I can see your expression when the phone rings.” – Stevie Nicks

43. “All around you, there was nothing left for me.” – Stevie Nicks

44. “At the end of the Italian Summer, it rains fast and it rains hard.” – Stevie Nicks

46. “Has anyone ever written anything for you in all your darkest hours?” – Stevie Nicks

48. “In secret, she says she needs to see him, but no words are spoken.” – Stevie Nicks

Which of these Stevie Nicks quotes resonated with you best?

Stevie Nicks was nominated for multiple awards in both her solo career and her time with Fleetwood Mac. She also won two awards.

Not only is she an artist, but she also does philanthropy work through the Stevie Nicks Band of Soldiers. She distributes things like iPod Nanos to wounded soldiers.

She’s also dabbled in other arts such as photography and calligraphy. She’s a busy woman and is still active in her music career even now that she’s in her 70s.

If you enjoyed these Stevie Nicks quotes and sayings, make sure to listen to some of her music and enjoy her lyrics as well.

The post Stevie Nicks Quotes From the Singer/Songwriter appeared first on Everyday Power.

Stevie Nicks Quotes From the Singer/Songwriter