Four years after the release of The Hitman’s Bodyguard, Ryan Reynold and Samuel L. Jackson return to their buddy comedy with a new addition – The hitman’s wife, Sonia Kincaid (Selma Hayek). This time, disgraced AAA bodyguard Michael Bryce has been hired by Sonia to rescue her husband, Darius. 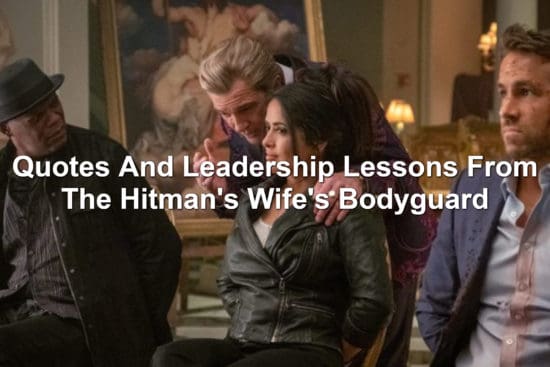 With that, there are also Leadership Lessons in The Hitman’s Wife’s Bodyguard. That’s what we’re going to take a look at today. So sit back and remember, as Michael Bryce would say, to fasten your seatbelts.

Michael was visiting a therapist to deal with his issues as a bodyguard. After protecting a hitman, he was disturbed. He didn’t know what to do.

The therapist gave Michael a great piece of advice. She told him that he needed to deal with the past if he ever wanted to move forward.

Many leaders never become great because they cannot get past the past. Instead, they stay stuck in a past hurt, a trauma they experienced, or a feeling of self-doubt from their past.

If you cannot deal with your past, you cannot move into the future awaiting you. Therefore, deal with the past to move forward.

2. Find a place to decompress:

The therapist told Michael to find a place he could get away from the bodyguarding business. Capri (like the pants), Italy was recommended to him. So he decided to go there and get away from everything.

This actually was working for him. He found himself decompressing. He learned how to relax. He was becoming happy again.

Leading is stressful. We deal with a lot of issues. Many times, we never decompress from our day. Instead, we continue to live in it.

This is why it is important for leaders to find time to decompress. Maybe it’s a nice, long vacation. Maybe, as in the church world, you are given a sabbatical.

Whatever it is, find a way to get away and decompress.

3. You may wonder how you’ll succeed with your team:

Agent Bobby O’Neill (Frank Grillo) put Michael with Darius and Sonia for a mission. Michael wondered how they were ever going to succeed. None of the people on the team knew how to work together.

This is more common than we’d like to admit as a leader. We are given a team. We look at the team. And we wonder how we’re ever going to get things done.

You may not be the biggest fan of the team you have. However, they are who you have and they can still succeed – Leadership lessons From The Hitman’s Wife’s Bodyguard
Click To Tweet

Be confident in your team, even if they’re not who you’d pick.

4. Your team may be willing to do what you’re not willing to:

Michael had made a decision not to use a weapon. It was a suggestion by his therapist. He was determined not to break the promise he had made to himself.

This played up to hilarious effects as chaos reigned around him. He could have avoided a lot of trouble had he only used a weapon.

Lucky for Michael, Sonia and Darius had no qualms about using a weapon. They were willing to take out the bad guys with lethal force.

There may be things you’re unwilling to do. Maybe it is working late hours in the office. Or it could be letting someone go.

The good news? There’s probably someone on your team who is willing to do things you’re not.

Not willing to work late due to family commitments? You might have a team member who doesn’t have a family. They’re more than willing to put in extra hours.

There’s always someone on your team that can fill in your weak areas.

5. Listen to the signs you’re given:

Michael asked for a sign of what to do next. Multiple signs appeared to him.

First, he sees a tour bus with a sign about Tuscany. Then, there was a plane pulling a banner stating, “Tuscany awaits.”

He got the sign to go somewhere. He didn’t want to listen.

Finally, he relented. He listened to the signs and went to Tuscany, where his adoptive father awaited.

We will regularly ask for a sign. The sign will appear. We will brush it off as a coincidence.

I want to encourage you to listen to the signs you’re given. They’re there for a reason. Listen to them.

He’s the greatest bodyguard who ever lived. I’m just me…

Michael held his father in high regard. He saw his father, Senio (Morgan Freeman), as the best.

What did Michael think about himself? He’s just normal. There’s nothing special about him. It’s his father who is the man.

If I ever become a father, I don’t know how I’ll live up to the legacy he’s left. He’s the greatest father in the world.

However, I shouldn’t discount my ability to be a father. I’m me, but I’m also more than that because of what he taught me and how he raised me.

So are you. You’re more than the other leaders in your life. You’re you, but you’re also special.

7. Our teams may mistrust us if we’re not honest with them:

Sonia discovered a truth about Darius that he had hidden. On their honeymoon, Darius had gone to a fertility clinic. She discovered this when her former lover, Aristotle Papadopolous (Antonio Banderas), told her this. Aristotle also told her it was to find eggs to help with their attempt to get pregnant.

The truth was something else completely. Darius was impotent. He didn’t get the chance to tell Sonia this.

This caused tension between the two of them. It also caused her to flip on Darius. The trust had been shattered because of his dishonesty.

We think we need to hide difficult things from our teams. We believe it will help them get through the tougher parts of their jobs.

Honesty will help your team trust you. Be more honest.

You don’t need a license. What do bodyguards do?

Michael was having a difficult time dealing with his AAA bodyguard license being revoked. He felt as if he was a failure. He couldn’t be a bodyguard because he didn’t have a license.

Darius threw Michael’s mindset in the trash. He told him the truth.

Michael didn’t need the approval of the AAA bodyguard service to protect people. He could do that on his own.

Want to know something else? You don’t need a degree, certification, or title to be a leader.

What do you need to do to be a leader? You need to influence others.

Darius and Michael had to infiltrate Aristotle’s compound. To do this, they had to get through three layers of security.

The first layer was easy. They used a boring method of going out on a dinghy and sending out a decoy boat containing Gary and Yuhan. They became expendable and were killed to create the boring distraction.

While I hope you will never send a team member to their death, there is a lesson we can learn from this—boring works. Boring works well.

Don’t be afraid to do the boring. The boring things in leadership are often the most effective. Make sure you’re not avoiding these activities because they aren’t exciting.

Michael loved his adoptive father. He believed everything he said. One of those was about the use of kevlar. He always said that it was a disgrace to bodyguards to wear them.

Guess what? Senior wore kevlar to protect himself.

Why would he never admit to this? Senior wanted to boost book sales.

Boasting can give us and those we lead a false sense of who we are. We begin to bend the truth and let little white lies slip in. These, then, become canon in our legacy.

Let’s begin working on ourselves. Let’s begin to say that honesty is better than book sales, a better legacy, and anything else we may think we need to boost.

O’Neil gave Michael paperwork to sign. Michael believed they were papers to reinstate his bodyguard license. They weren’t.

The papers Michael signed were adoption papers. The Kincaids had decided they wanted to adopt Michael.

Michael didn’t know what he was signing. Instead, he wound up with something he didn’t expect.

Know what you’re signing or getting into. You may be shocked to learn the truth – Leadership lessons From The Hitman’s Wife’s Bodyguard
Click To Tweet

We have to be careful with what we choose to sign.

Read over any paperwork you’re given. Make sure what’s on paper is what was discussed.

If you don’t, you may end up in a situation you never expected.