Naughty can be fun and open up some new corridors of expression, while a simple “hey” can be all it takes if you’re the odd one out in about a 1000 people… Well, what we’ve found is that Cute love quotes for her work even better. Don’t trust us? Read and decide for yourself.

11 Unforgettable Things to Do in Beli…
The Friday Roundup – Speech to Text, …
WhatsApp Status section to become mor…
How come so many Christians don’t rea…
Firebird – Making Of Story

One or more of the following 33 Cute Love Quotes for her might be the perfect one(s) for you, so make sure you don’t miss any. Some of the following can be used right at the start, while with some other quotes, it would be best to wait until the relationship has a solid base, but either way, you’re going to find value in there. Let’s begin: 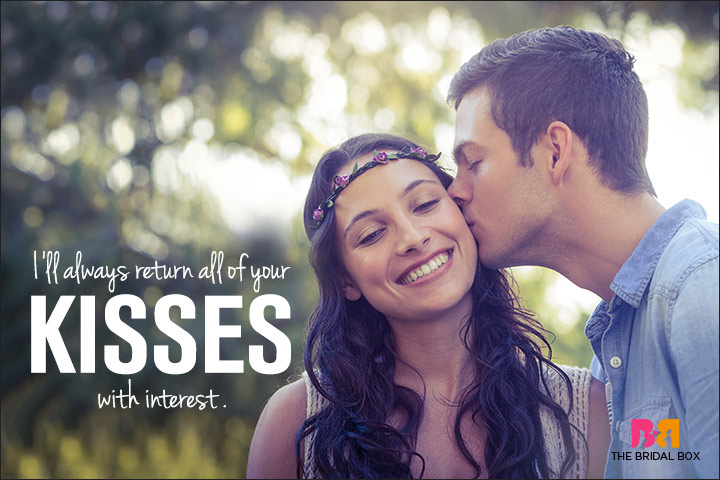 Another one that’s a bit of a classic, but just like strawberry ice cream, hasn’t lost any of its charm (even if it is an acquired taste). Let her know just how much you’re looking forward to seeing her next by sending her something suggestive, but subtle. 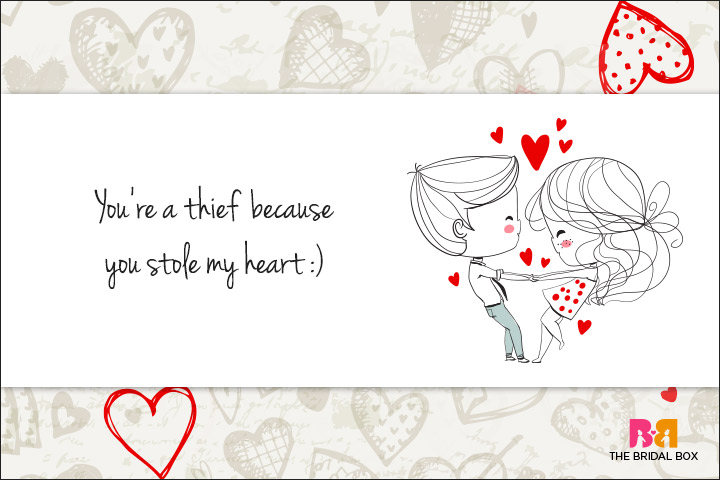 This one almost always elicits (a sometimes inaudible) “aww” from the other party. The trick is to time this one right, not too long but not quite right at the beginning, and it can be a game changing text to send. 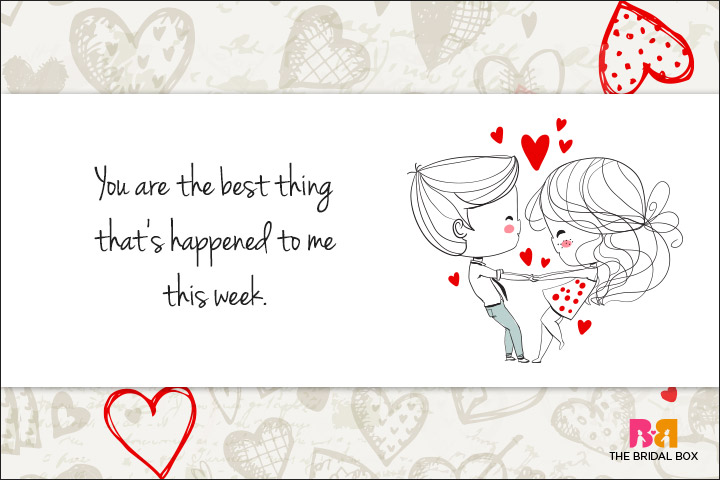 Yes, this week. You don’t want to say some thing like the word “ever” unless you’ve been married for 10+ years. Then it makes sense. For now, let her know that you’ve been enjoying the time you’ve been spending together, and you look forward to having a chat as well.

This one’s usually a fair assessment of some stage of your relationship, so it’s best to bust it out then and send this wonderfully charming and Cute Love quote over. It lets her know in no uncertain terms that you, shall we say, care. And that’s always a wonderful thing to be told, especially in such a manner.

This is actually either quite romantic, or quite cheesy depending on how and when it’s used, except when it’s used right at the beginning of the relationship which is when it becomes funny and cute. This is a good way of letting her know that you are willing to take a risk on her. It’s flirty and it’s fun. 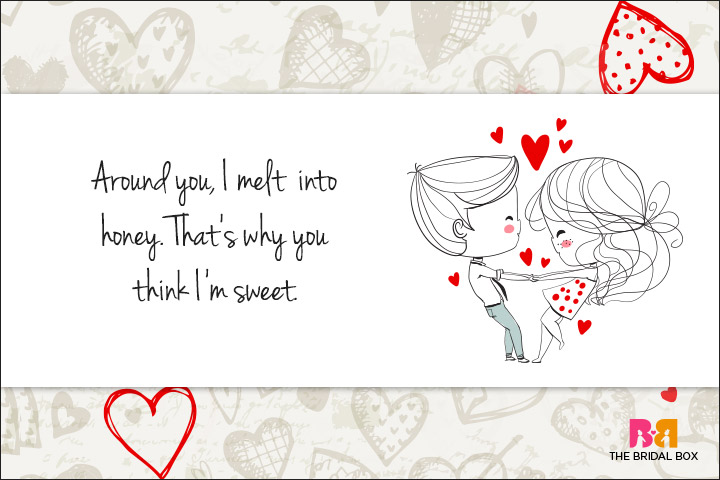 This is fair enough, and once again it may be an accurate depiction of your current state! If you feel that this quote best describes your relationship with her, then let her know by sharing! You can also use it as a two Message sequence with a gap between the first two messages to leave her guessing. 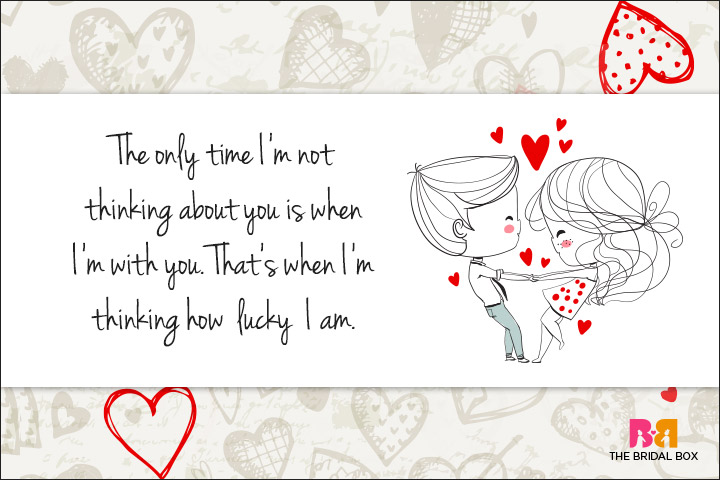 Einstein once said something very similar to this, but we just can’t seem to recall at the moment. Anyhow, this is often the case in the early parts of a relationship when love seems to take over every fibre of one’s being and becomes the only thing that matters. If you’re still feeling like this past 9 months of your relationship, then you’re definitely doing something right. In either case, let them know exactly how you feel. This is a key part of almost every successful relationship, and it makes a lot of sense. It’s a really cute way to let her know how you dig that she seems to understand you. This kind of a thing cannot be taken for granted. Also, if you feel this way, never stop trying to put your feelings for her in words! You know why this message causes such an overload of sweetness to the reader? Because it works even if you’re a prince or a pauper. Whether you have it all, or she is the only valuable possession that you can name, the fact is that this cute love quote will work anyway. 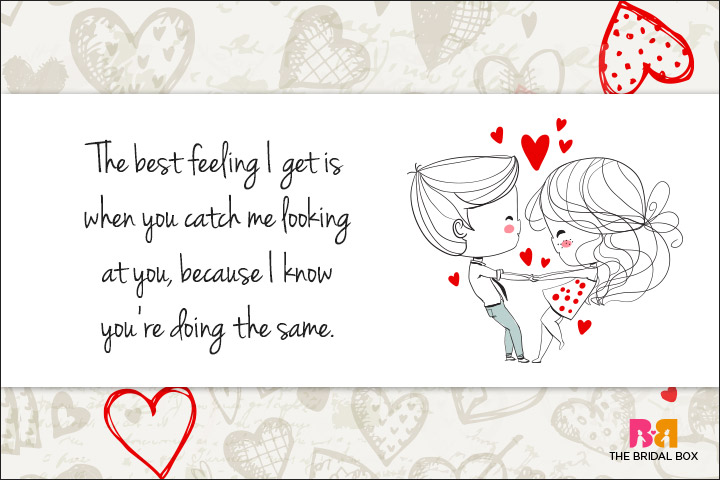 Boy, isn’t this correct? You’re just letting her know that you know what she’s doing, and that you’re doing the same all the time. And that’s the best part. This can be a really good message to send in the early days of the budding relationship. 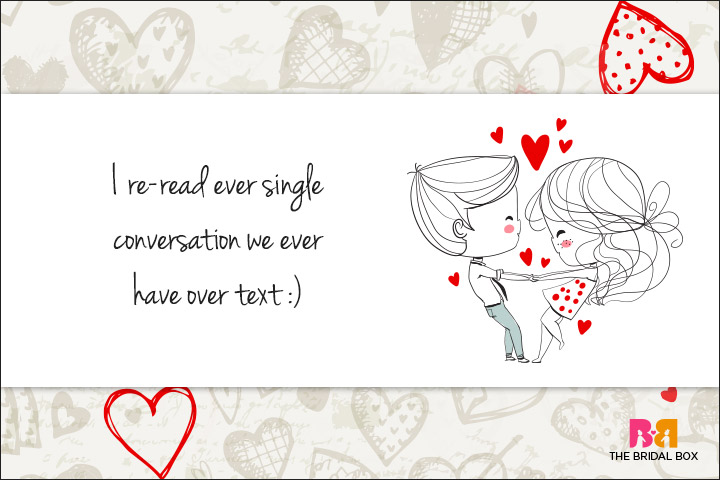 This is one that’s definitely for later, we don’t want to come on way over the top straight up, do we? Didn’t think so. Right, so this is going to happen for a while, or like, ever, and when it does happen, let her know. It’s heart-warming, it’s cute and it’s a good message to get overall. Use wisely. 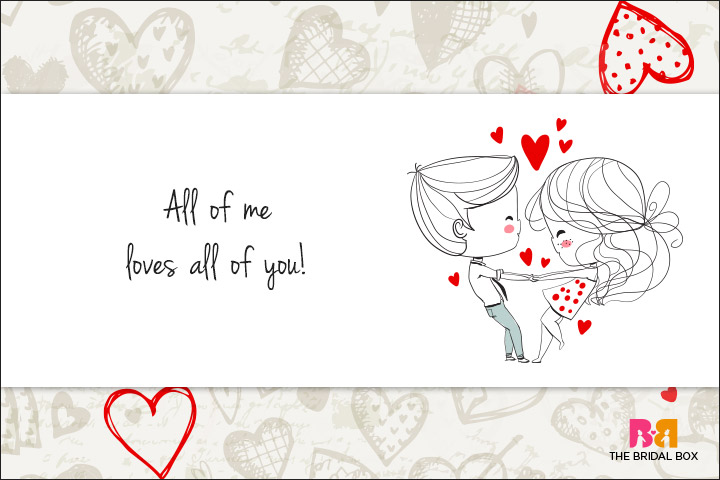 Again, not one that you should be starting conversation or breaking the ice with, this is a cute message that says you like everything about her in every way, not just the way she looks or talks to you. And that’s a really cool thing to say, and a cute message to send. A bit down the line though, that’s for sure. 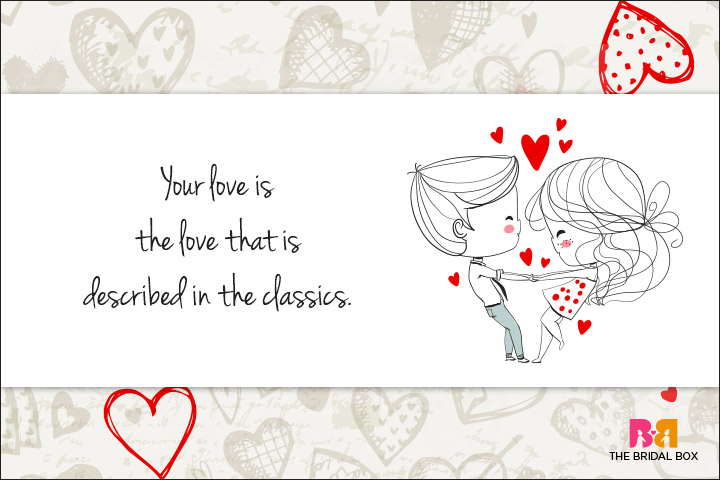 This is slightly leaning towards being on the romantic side, but when used in the right context, it can be a really cute message to send. What context? Like when she does something nice for you, like buys you ice cream. Or whatever. The point is that you’re letting her know that you really appreciated being with her. She’ll get that and she’ll love it. 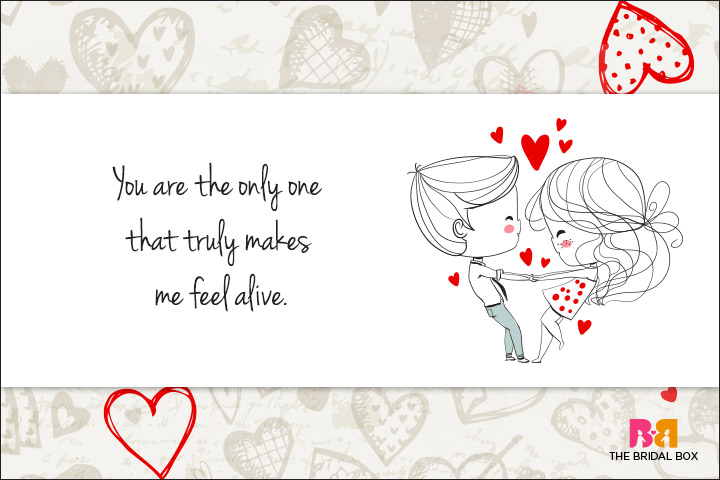 Again, the context here will take the heaviness out of the statement. Consider sending this message when she’s pointed out a new band to you that you came to love or recommended a book. It can even work when the two of you had an interesting conversation, somewhere around 4-6 months into your relationship, when you can say this and it’d be cute. Not entirely serious, but not sent for nothing. 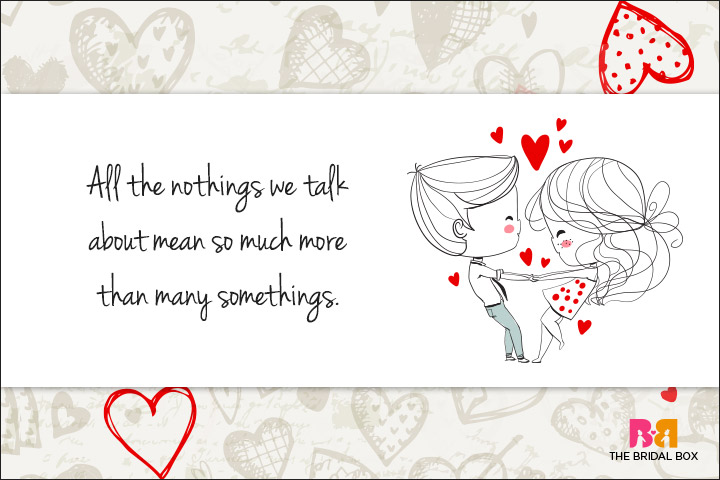 What is idle chatter? What is spending your time “being productive”? If we’re working to be happy, then I’d rather just skip the working part to spend time with you. Our idle and lazy chats have more insight than most of the lectures I’ve attended. Speaking my mind to you matters more to me than… You get the picture. Make your point to her.

You so wish you could skim off work and spend time with your beloved, but the thought is all that you’ll have at the moment. Still it’s nice to let her know that if you could have been anywhere else in the world today, you would have been there right next to her. If that’s not a cute thought, then we’re not sure what is! 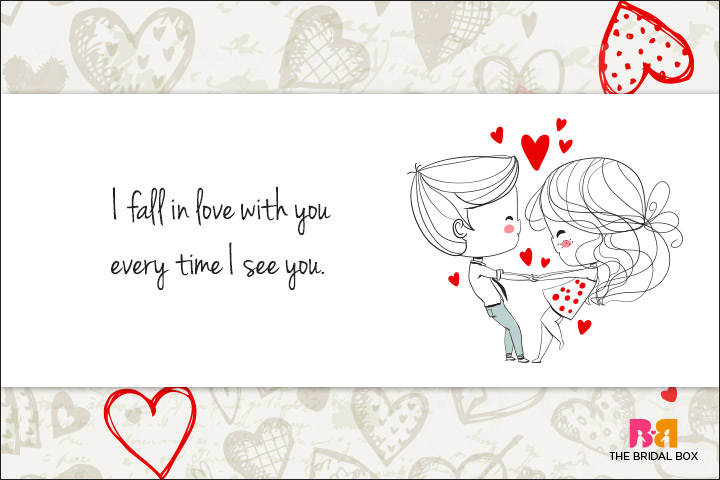 Sure, it’s romantic and sweet and everything, but the best way to use this line is to text it across right after you had made a clumsy oaf of yourself and done something silly, like trip over. You would be hard pressed to get a better response, and for her it would be the cutest thing ever. This is one to keep in the locker for the guys.

[Read More: How Deep Is Your Love: 19 Deep Love Quotes For Her] This really is a really cute thing to say, right about the time you first declared that you love each other? Call me crazy but it seems that this would be just the message to send when you’re first falling in love, but not quite there yet. This sounds like something someone with low self-esteem would say, but if you stop to think about it for a second, you’ll see how it’s not a recognition of a lack of ambition either. It’s entirely the opposite. It says that your only focus was to be the best you could be, and there could only be one distraction to get in your way. And that’s okay. That’s the context. 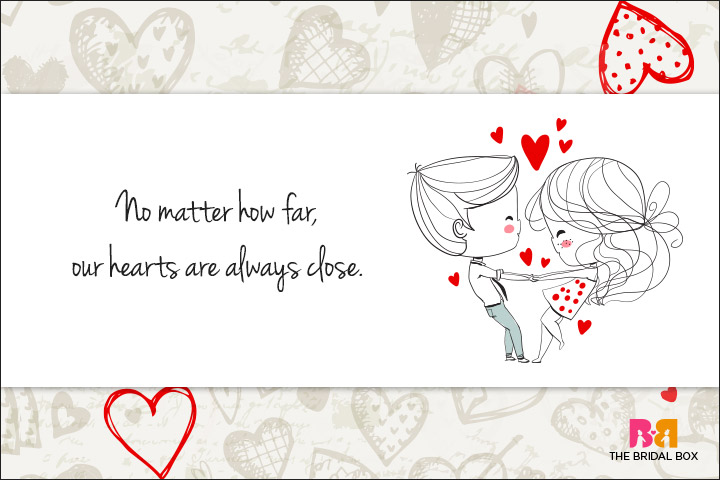 Is she going away for a while? Make a light-hearted and cute statement about something that is out of your control, while sending a reassuring “I’ll be waiting for you to return” claim as well. It’s not too heavy, and it gets the job done. For her and for you. 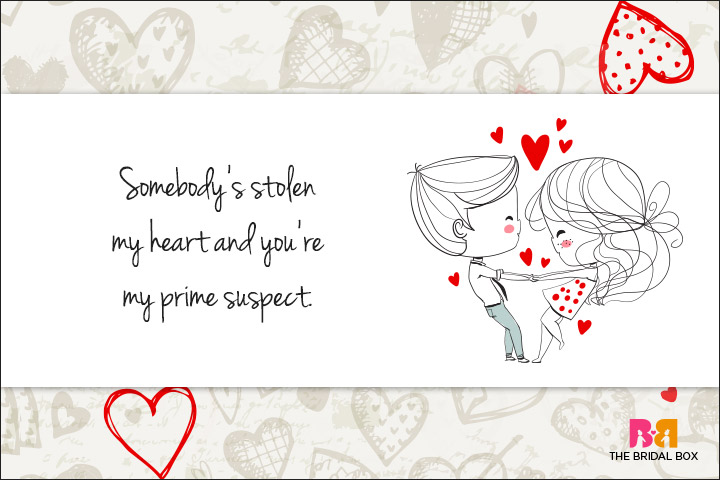 Thief! This is one more for the early days. Let her know you’re interested, and in no uncertain terms either. This is flat out direct, and an excellent ice-breaker to reach another level of conversation. 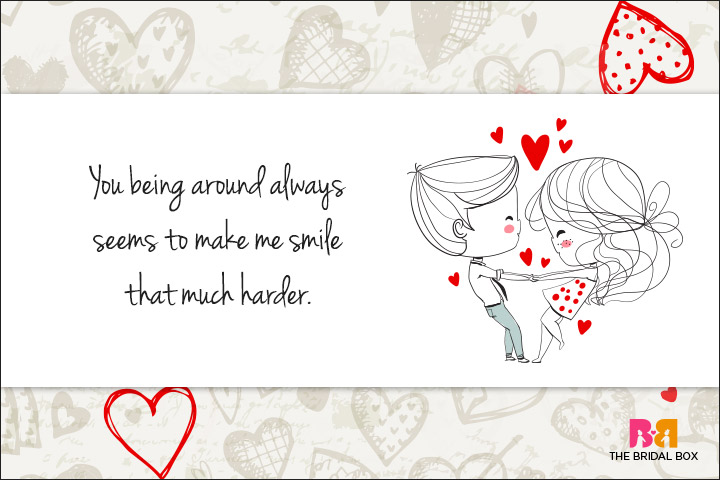 This one is really straightforward, and really cute. 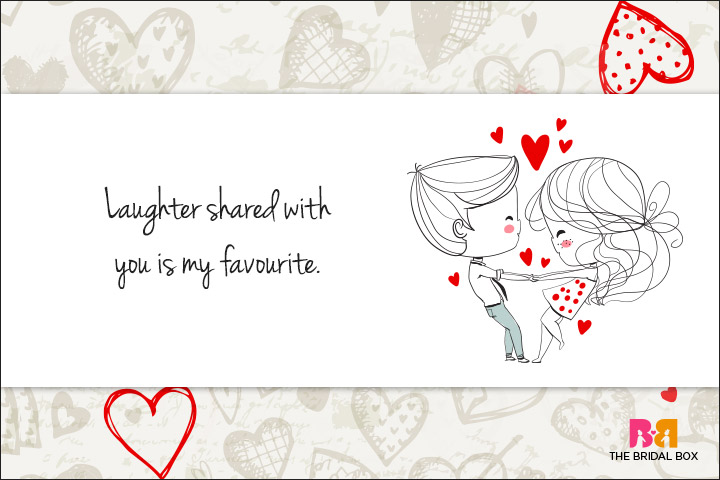 She says she would have loved to have been there with all you guys as you had a good time? Say yes, so would you, and then send her this message. It’ll make her day. 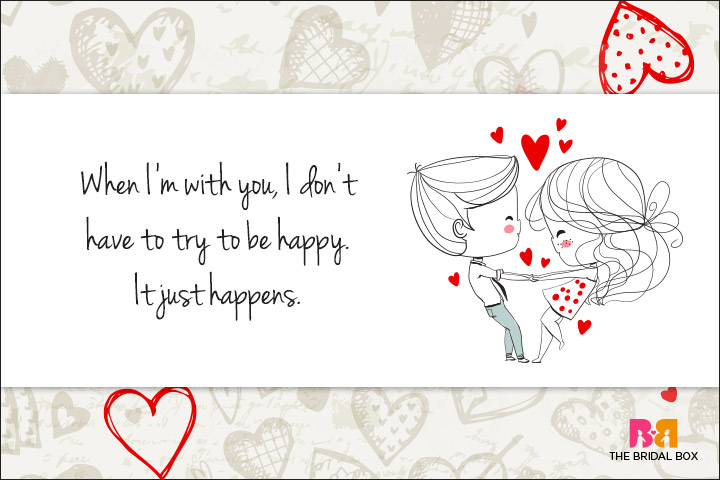 Just the smile on her face would have been worthy. Do not use in cheesy connotations though. 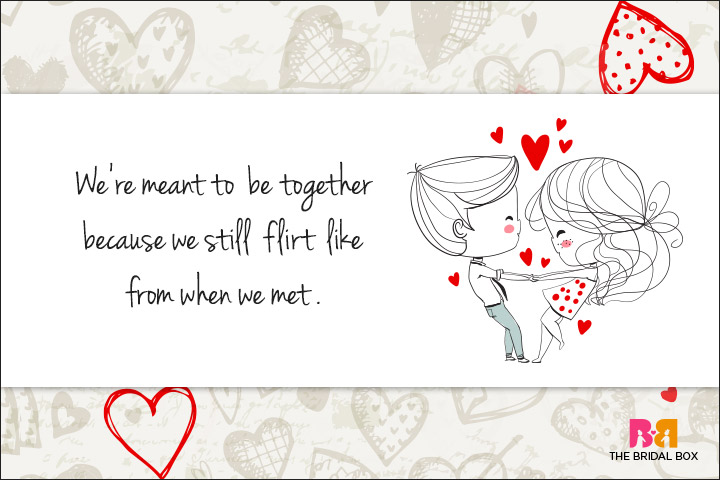 This is an important distinction, and one that needs to be brought to her attention. 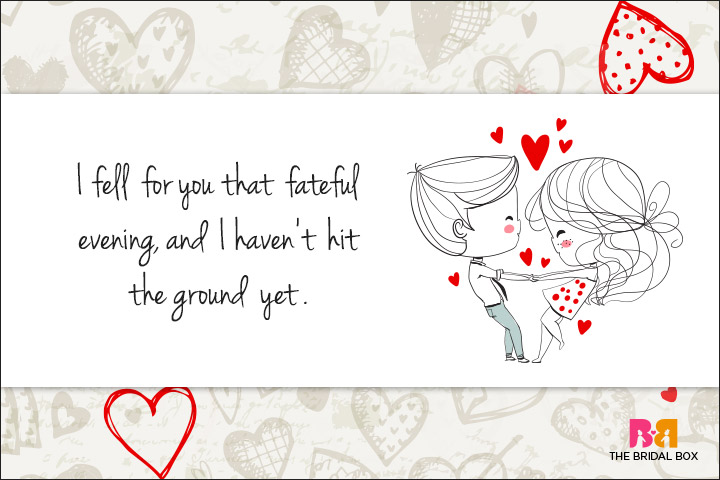 Light-hearted, but all too real. 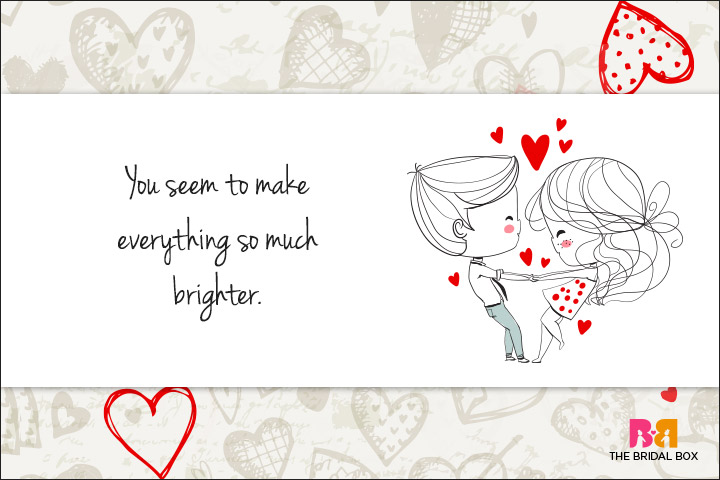 Use when discussing how much better the party became once she had arrived. You’re supposed to me mad, but you can’t be. That’s cute. She’ll feign hurt, but worry not. You’re just telling her the truth, and she’s going to love you for it. When you boil it down, of course. [Read More: 29 Honestly Funny Love Quotes For Her Pleasure And Yours Too!] This is probably the most “aww” eliciting message on the list, so say it when you’re really feeling it.

The post 33 Sugary Sweet Cute Love Quotes For Her That'll Melt Her Heart appeared first on The Bridal Box.

This post first appeared on The Bridal Box - All Your Wedding Needs @ One Place, please read the originial post: here
People also like
11 Unforgettable Things to Do in Belize — Important Tips & Places to Stay
The Friday Roundup – Speech to Text, Text to Speech and Subtitles.
WhatsApp Status section to become more useful as per a new leak
How come so many Christians don’t really know God?
Firebird – Making Of Story