Re-elect The Donald! Go to War With Iran!

Do you own stock in the companies who make the vast bulk of their money from American taxpayers?  I'm talking about the Military industrial complex.  The companies in this 'industry' have three basic objectives: 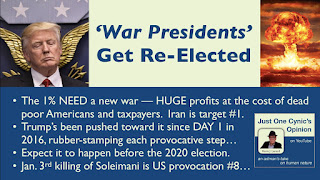 The PRINCIPAL source of income for these firms, essentially, is US taxpayers.  While the first  and second sources of profit are steady and secure (although the US hardly needs to be the only country with hundreds of global bases), since they've successfully lobbied to keep the US military budget so high that universal healthcare and education is apparently impossible to afford, the REAL injection of profit at the expense of the 99% of Americans comes from regular and continuous ongoing and brand new wars. They haven't had one in awhile, so they are pushing hard for a new one.

If YOU had old stock in your pantry, you'd want to use it up too!  Old bombs are just the same.  Gathering dust while the factories that produce them sit idle.  It's now about time to clear out the inventory, just as Donald Trump helped them do on (virtually) Day One (April 6, 2017) when he authorized exactly 59 cruise missiles to be launched against a conveniently empty Syrian airfield.  (59.  Against an empty airfield...)  It is now more than two years later and there are a lot more cruise missiles (and millions of other types of aging armaments) gathering dust.

Having funded the creation of all these armament, you'd think the average American would benefit from their production and sale in some way?  No.  What you do is provide them with tax breaks and bailouts while providing all of their ongoing income.  Which Americans DO benefit?  The wealth-hoarders who are lobbying to reduce their taxes while reducing your services.  Win-win.

The Republicans elected into the US government know a couple of things in January of 2020:
Expect the many steps that have been taken already by the so-called 'Trump administration' to be added to:
Ah....where do YOU think this is going?  Lots of poor Americans working in the only barely adequate paying job they could find in the US military are about to be maimed and die, then get denied compensation back home after their sacrifice.  And who is going to make a shitload of taxpayer-funded profit?

Re-elect The Donald! Go to War With Iran!