Historical Timeline of Vintage Women's Bathing Suits from 1915 to 1945

This particular article from LIFE magazine, July 9, 1945, includes a historical timeline of vintage swimsuits, modeled by a LIFE model.

In 1905 a lady's bathing suit was made of ten yards of material, in 1945 it is made from one. Between these two statistics and these two dates lie a social revolution and an annually expanding area of bare, brown flesh. The revolution has made it quite permissible for even the most proper women to appear on public beaches in costumes which used to be seen only in the rowdiest cabarets.

Prior mover of the revolution was Annette Kellerman, the first famous woman swimmer. In 1910 Miss Kellerman became more famous by discarding the ruffles and heavy corset that went with bathing dresses and appearing unabashed in a tight, one-piece suit. This set a pattern for the Mack Sennett girls and the Atlantic City bathing beauties, who found that scanty suits could bring fame and fortune. Then in 1926 Gertrude Ederle wore only brassier and shorts to swim the English Channel. Her brief costume was chosen for athletic reasons but it gave many nonathletic women an idea. The U.S. took up the cult of sun bathing. Nudity was acclaimed as the secret of good health. It was easy to rationalize, though not to prove, that the more bodily area exposed and tanned each summer, the fewer colds next winter.

Since 1930 U.S. bathing suit manufacturers have made money by cutting something more off their suits each year. Neither sermons nor ordinances nor arrests have slowed the steady progress for bloomers to one-piece suit to bra and diaper pants, a progress recorded on the following pages in a series of suits modeled by Pamela Randell. But in 1945 both maker and wearer are at the end of their rope; there is - or seems to be - nothing more to cut off. 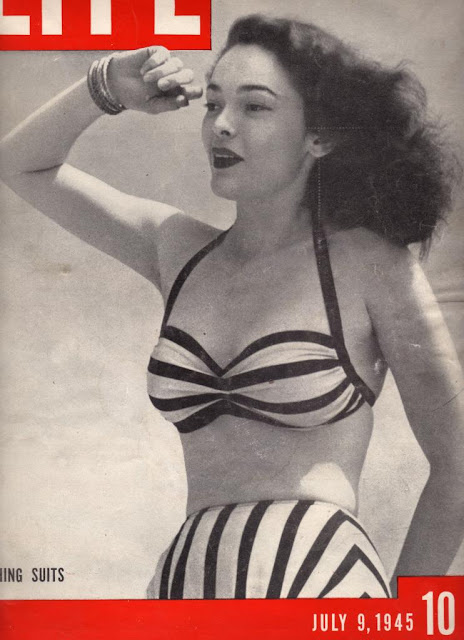 Historical Timeline of Vintage Women's Bathing Suits from 1915 to 1945