Mark Wahlberg and Peter Berg are onto a winning formula. Having worked together on Lone Survivor and followed up with Deepwater Horizon, the pairing found themselves working on Patriots Day. Each of these films has stars Mark Wahlberg, deals with an aspect of American history, is based on true stories and are deeply inspirational. In Patriots Day, Berg chronicles the 2013 Boston Marathon bombing and the manhunt that ensued from the perspective of police Sergeant Tommy Saunders, played by Wahlberg.

Much like Deepwater Horizon, Patriots Day is more of a docudrama and is much broader, functioning like an ensemble drama with Wahlberg as curator. It's got a comprehensive feel to it, logging times and places in the buildup to the bombing, delivering the story in a chronological and straightforward manner. Berg covers the story from both sides of the law, introducing the bombers as people, refusing to resort to faceless one-dimensional villains. We follow the lives of several critical people in the hours that followed the bombing, getting a slice of Boston life and culture in the process.

Patriots Day has similarities with Zero Dark Thirty, chronicling and covering a terrorist manhunt with unflinching determination. The recreation of the Boston Marathon bombing is authentic and harrowing as real and recreated film footage merge almost seamlessly. This realism and urgency is carried into the rest of the film as the manhunt intensifies. Berg manages to recover many of the missing puzzle pieces to give a much fuller and clearer rendition of the events that transpired. We see the commitment on the part of the Boston Police Department, the lengths to which the FBI analysed the act of terrorism and witness some thrilling moments in the resolution to the manhunt. 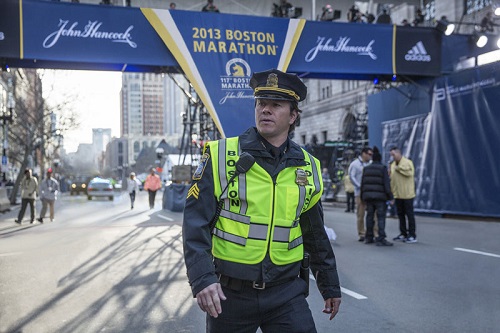 Mark Wahlberg continues to play the "everyman" as Police Sergeant, Tommy Saunders. He may not be quite as talented as Tom Hanks but is known for his generosity as an actor, allowing everyone to shine, sometimes to his own detriment. He is relatable, grounded enough to flatten his ego and accessible enough to make you feel that you could grab a beer with him. This makes him likeable, easy to rally behind and even easier to believe as "that guy". As curator of Patriots Day, he's always putting himself on the frontline and racing to keep up with the action.

He's supported by a stellar lineup including: Michelle Monaghan, Kevin Bacon, John Goodman and JK Simmons. While relegated to smaller supporting roles based on the sheer size of the ensemble, their experience and presence is vital. Monaghan plays Wahlberg's dependable and loving wife, Carol, Bacon leads the FBI investigation in a restrained performance as Special Agent Richard DesLauriers, Goodman gets in everyone's grill as Commissioner Ed Davis while JK Simmons brings experience and bravery as Sergeant Jeffrey Pugliese. Themo Melikidze and Alex Wolff also deserve a special mention as the prime suspects, adding a layer of complexity to their performances.

Patriots Day is a thrilling film but it's also heartfelt, serving as something of a tribute in much the same way as Sully did for New York servicemen following the Hudson River landing. However, this film isn't just about the rescuers but also about the way the city of Boston pull together to stay Boston Strong. Interviews with the victims show hope for the future as one diabolical act of terrorism serves to unify instead of divide. Bridging the reality of the tragic event, it's difficult not to be moved by the beauty of the humanity in the face of such hatred.