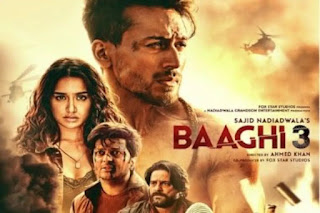 If you have 8-pack abs and big biceps you can pretty much do anything you want - that's the message that Baaghi 3 gives you.

Let me do this review quickly checklist style so I don't have to waste any more time on this Movie, oops spoiler alert.

Music - Nothing memorable or enjoyable. I am really irritated when people "recreate" songs, yes, nobody does remix these days, it's all recreated. If the songs are from new movies it's even more irritating. Some people would like the item song by Disha, I didn't like it. I like Disha, she's supercute, but the song was directed awfully. In a film being directed by a choreographer you expect a better dance number. And the lyrics...wait, there were lyrics?

Action - The stunts by Tiger are truly impressive, there's no denying that. But stunts are a spice in the dish, you can't make a dish with just red chilli and garam masala. I don't know what gave Ahmed Khan the conceit to think he could direct action but I wish he hadn't.

This is a general grievance I have with Indian filmmakers. When it comes to directing action they have all graduated from the 120fps school of filmmaking. I agree with Peter Mckinnon that everything looks sexier in slow motion but these directors have taken this to the level where it's not cinematic, it's tedious. I love watching fight sequences but these just annoy the hell out of me. Before this Rohit Shetty did the same thing in Golmaal 3 (or was it 4? Who knows? Who cares?) where the hero would hit 10 punches then 10 goons would fall from the sky and take about 65 seconds doing that. Trés irritable!

Performances: Some of them are good, Riteish Deshmukh, Jackie Shroff a few other characters. Tiger, not so much. He had acted better in Heropanti. In this one, no acting only stunting. But I don't blame him, I blame the director. Shraddha has done ok, but there wasn't much for her to do. Ankita Lokhande, ha, don't make me laugh.

Dialogue: There are a couple of funny ones in the beginning, but then they go from mundane to pathetic.

Direction: Very, very weak. Absolutely clichéd from start to finish. In the future if I saw a movie was directed by Ahmed Khan, will it make me want to see it? Big fat no!

I don't know how many people caught it but they stole a couple of scenes straight from "Taken" and one shot from "Wonder Woman". There was a good chance to grab a "I am Spartacus!" scene later in the film but probably Ahmed Khan didn't have that DVD.

In terms of realism, the movie has stretched suspension of disbelief like chewing gum and taken it past the limits of elasticity.

Did you notice I didn't talk about the story? That's because you already know the story if you have seen the trailer. If you haven't let me tell you the story now.

Full disclaimer: My bias. I have seen Ahmed Khan only on TV in Kapil Sharma's shows. He choreographed Kapil in Kis Kis Ko Pyaar Karoon. Every time he comes on his show he makes fun of Kapil's dance skills. We all know Kapil is not a great dancer but there is such a thing as grace. Ahmed Khan doesn't know it. It irritates me.

Recommendation: Watch it on the TV screen when it comes to streaming while you have dinner. The 120fps action will fit perfect there.