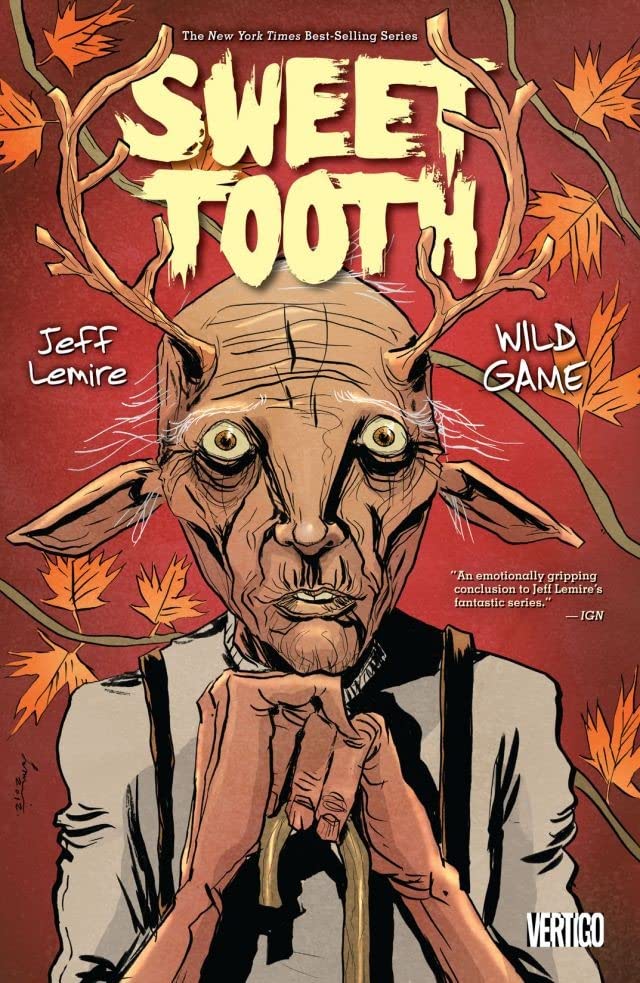 Jeff Lemire succeeds in the end with Sweet Tooth Vol. 6: Wild Hunt. Success, as we’ve examined before, was not assured, given what seemed a rather large lift that would be needed, and maybe more than just eight issues, to tie up all of Sweet Tooth’s loose ends. In the end, not every question is answered, which is fine (neither for Y: The Last Man, nor certainly for Lost for that matter); in his finale, Lemire elides some of the most salient material, but the conclusion is perhaps all the more enticing for it.

Wild Hunt is sensitive and graceful, especially in that ending, a compassionate bow on an at-times-horrific Story. Between Lemire’s sequel miniseries, soon to be collected, and the Netflix TV show — which connects to this volume in a very specific way — this hardly even feels like the end; in fact, as this book says, if we’re gifted a couple more seasons of the show, this story is “really only just beginning.”

Given Sweet Tooth’s road trip structure, one gets the sense Lemire had the option of a quick exit whenever he liked. Lo and behold the group arrives in Alaska and the endgame can begin, which is what happens here. One imagines there could have been adventures along the way, but after a tumultuous previous five volumes, the group takes an almost unbelievably peaceful drive up north and that kicks off that. (I’ve purposefully avoided spoilers as to what Sweet Tooth: The Return is about, but Lemire has a variety of options for where to set a sequel, from an “untold tale” on the road to a story of Gus' later life [or ancestry], or a story of entirely new characters within this same world.)

Sweet Tooth’s conclusion is helped immensely by Lemire and Matt Kindt’s three-part “Taxidermist” collaboration from Sweet Tooth Vol. 4: Unnatural Habitats, which gave us the broad strokes of Gus' origins implicitly if not explicitly. Add to that the interstitial “Singh Tapes” issue, and many mysteries are solved scientifically, if not spiritually — that DNA from the early 1900s antlered creature was used to make Gus; that however the plague was involved, it was released too. Indeed how exactly Gus and the plague are interrelated, we don’t know, only that it is what it is, as it’s said, as in the earlier incident as in the present.

That’s a small point, really, as clearly this was all done to Gus, not by him — whether Gus himself spreads the plague or if the plague is somehow released as a byproduct of creating Gus (and the other “originals”) ultimately results in the same. As to whether Gus is the reborn god Tekkietstok (or the spawn thereof), that’s something Lemire never quite gets to, though in the end the question is almost moot — clearly this is an extinction-level event, and the story favors an environmental explanation even if it can’t be said for sure on the page. How Gus' father knew about it all is another fair question, given that he does not seem to have picked up James Thacker’s journal when he found Gus.

Sweet Tooth has been at its strongest when it surprises, which it has not always. A good chunk of the fourth and fifth books were rote, offering much more in character than they did in plot, and all Lemire set up there with Project Evergreen and some of the book’s additional environmental themes ultimately came to naught. Which is why the final extra-sized chapter, encompassing Gus' adulthood and into his dotage, is so impressive, because it does surprise — not only the fates of Gus and Wendy, but also Bobby, the deep woods that turn into their encampment, and the parallel of Gus with Jepperd’s militant son Buddy.

I’d read an entire series about Gus and Buddy (and not-so-secretly I hope The Return revisits them at least a little) — the adopted son of a warrior raised with love and his biological son raised in violence, with two different philosophies toward the humankind that troubles them (indeed Lemire has his own Orion and Scott Free here). Beautifully, again, given all the horror this book has entailed, the end is one of magnanimity — that the humans cease to fear the hybrids and the hybrids forgive the humans, and the hybrids ease the humans into their deaths but then memorialize them, not celebrating their extinction but remembering their sacrifices.

“This is a story” begins the final chapter, and I’m sure we can all hear James Brolin’s voice now when we read that. The connection between Sweet Tooth the comic and the TV show is topsy-turvy, to say the least — the first season simultaneously paralleling and also prefacing Sweet Tooth Vol. 1: Out of the Deep Woods — and so it seems fitting that the show’s beginning should nod to the comic’s end. We saw some things in the show’s first finale that suggest how deeply the mythology will be plumbed if the show continues — my fervent wish is that we’ll get another season or two (or more!) in which some of what was not explored in the comic can be explicated on screen.

One way or another, Sweet Tooth Vol. 6: Wild Hunt isn’t the last we’ll see of Gus.

This post first appeared on Collected Editions | Blog, Collected Comics Review, please read the originial post: here
People also like
Top Back-To-School Preparation Tips & Activities
The Sign of Four
How to Create a More Compelling Job Posting
2021 MacBook Air to Come in iMac Inspired Colours
Why I Chose to Be Vaccinated Against COVID-19
Smart Tips on How to Get More Likes on Your Instagram Posts
“The Friend Who May Not Seem a Friend” – The Cat and the Fire, Post 2 of 3
Music Profile: Elliott Waits For No One - Alternative Rock Band - Illinois, Usa | SRL Networks London Music PR
قصة سيدنا موسى عليه الصلاة والسلام ج 2
Keeping in Touch