Review: Planet of the Apes Omnibus: Before the Fall trade paperback (Boom! Studios) 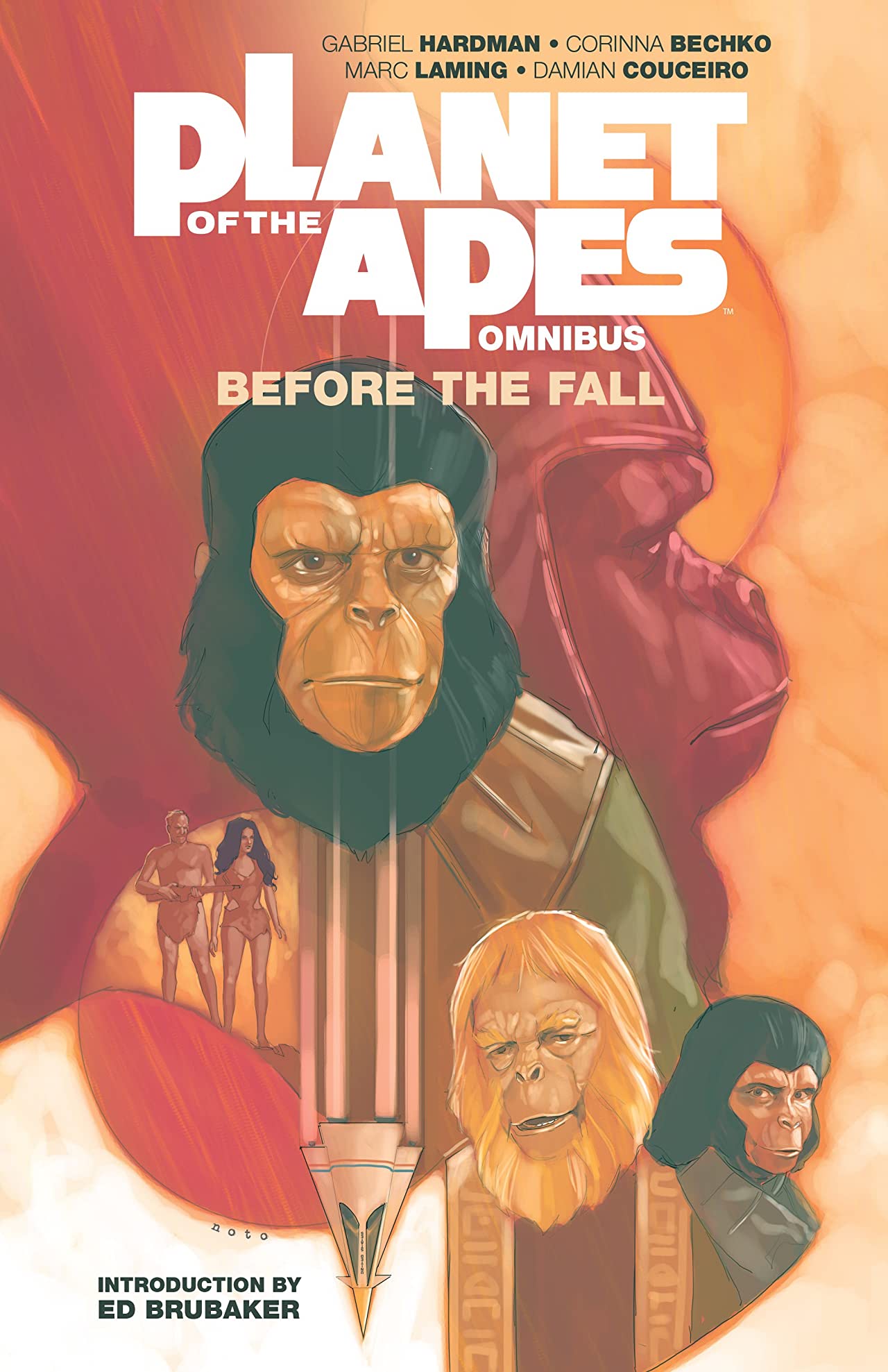 [Guest reviewer Zach King blogs about movies as The Cinema King. Don’t miss his recent April of the Apes review series of the Planet of the Apes movies at the site.]

While the first Planet of the Apes Omnibus is perhaps the stronger read, Planet of the Apes Omnibus: Before the Fall is, I suspect, the easier sell for the casual fan. The gorgeous cover by Phil Noto certainly caught my eye, boasting familiar simian faces like Cornelius, Zira, Ursus, and Dr. Zaius. Indeed, where the first omnibus only included winks and nods to the film franchise (save for the two-page cameo of the Lawgiver), Before the Fall is a proper prequel to the 1968 film, ultimately taking us through the opening sequence of the third film, 1971’s Escape from the Planet of the Apes. Though hampered by artwork that makes many of the apes indistinguishable, Before the Fall is nevertheless a compelling and intriguing work, even if a few dangling threads trip up the book’s hasty yet ambitious conclusion.

From writers Corinna Bechko and Gabriel Hardman (Green Lantern: Earth One), Before the Fall initially seems like a collection of two different stories, though the book’s saving grace is the way that the two narratives dovetail together in the end. In “Betrayal of the Planet of the Apes” and “Exile on the Planet of the Apes,” we meet General Aleron, a one-eyed gorilla who discovers that a rogue faction of apes has been undermining the Council’s legal decisions. Then, in “Planet of the Apes: Cataclysm,” the destruction of the planet’s moon leads to the near-collapse of ape society as tensions splinter Ape City.

Ed Brubaker’s introduction suggests that this omnibus might more properly be called “Dr. Zaius: Year One.” Even the most passing Apes fan must surely be abuzz at the idea of such a book; Dr. Zaius is certainly my favorite character in the franchise, and he’s undeniably one of the more psychologically complex screen villains writ large. While he’s not the sole main character of Before the Fall, he’s a featured co-lead in an ensemble cast, and one of the most engaging threads in the book is his journey from an idealistic junior councilor to the hardened orangutan we met in 1968. For one, we meet his wife Siena, a kind of simian Lady Macbeth, and their daughter Valentina (recall his throwaway line to Charlton Heston’s Taylor about a granddaughter). We also see the small compromises that turn Dr. Zaius’s dedication into desperation, such that the moment we find him sitting alone in his office, in the dark, is enough to tell us how far he’s fallen.

The star of the book’s first half, though, is General Aleron, a new character who nevertheless reminded me of the idealism of Attar (played by Michael Clarke Duncan in Tim Burton’s ill-fated 2001 reboot). While so many apes in this series bury their heads beneath the truism that “ape shall not kill ape,” it seems Aleron alone is willing to acknowledge that an ape might kill an ape. The conspiracy Aleron uncovers in Ape City gets to the dark secret at the heart of the entire franchise, but his reaction to it helps us learn more about the entire planet of apes, not just the Ape City we see in the first two films.

Aleron’s visual design, an enormous gorilla with an eyepatch, is one of the most striking images in the book, especially in “Betrayal” as illustrated by Hardman. Unfortunately, though, Hardman and fellow illustrator Marc Laming struggle to make the apes visually distinctive. This lament may be somewhat unfair, given that the films too present the three ape castes as virtually identical, but this isn’t a problem I recall having with Carlos Magno’s work in the first omnibus. Here, there are multiple times when an ape’s arrival is meant to be a surprise, but it’s hard at first to tell whether it’s Cornelius meeting Zira for the first time or whether the chimp humanist Prisca has returned to the plot.

Fortunately, by the time we get to “Cataclysm,” artist Damian Couceiro acquits himself better, though there are still a few moments of dissonance where it might have been helpful to hear the apes speak. (Though Cornelius and Zira do look alike in the films, their voices certainly distinguish them.) If you’re like me, the subtitle “Cataclysm” ought to put you in mind of Batman: Cataclysm, the crossover that brought Gotham City into the disaster genre (and, for my money, kicked off the best year that the Bat-titles have ever had). Like its long-eared predecessor, this “Cataclysm” sees fire raining from the sky, turns ape against ape, and tees up an immensely compelling story about unity through rebuilding.

At twelve issues, “Cataclysm” is the longest story in Before the Fall, but I do wish it had gotten about four more issues. By the eleventh chapter, Dr. Zaius has virtually disappeared, and the plot resolves itself without any of our main characters getting involved. Dominoes set up by Cornelius, for one, fizzle out and never quite fall. The twelfth and final chapter, then, is a kind of coda that follows Dr. Milo (played by Sal Mineo in Escape) as he repairs Taylor’s damaged ship and prepares to leave the planet amid a sideways retelling of Beneath the Planet of the Apes. As a one-off, it’s the kind of fascinating storytelling that ought to cheer any continuity wonk trying to slot it all together, but as the final chapter of “Cataclysm” it ends up a distraction from the plot threads that grind to a halt as Bechko and Hardman try to wrap it all up.

One might have expected, for example, for this book to finally reveal what happened on Cornelius’s doomed archaeological expedition into the Forbidden Zone. The film tells us a bit about this when he and Dr. Zaius revisit the dig site, but I trust I’m not alone in hoping this would be a standout feature in the “Year One” treatment. Likewise, Bechko and Hardman tread on sacred ground when they strongly imply that General Ursus is in league with the bomb-worshipping mutant humans; while Milo’s narration suggests this alliance might only be an illusion, Couceiro’s illustrations suggest otherwise. (David F. Walker’s Ursus, meanwhile, deals with this matter not at all.) Either possibility makes for fruitful world-building, but its inclusion as the book’s final, unfulfilled cliffhanger leaves it in frustrating limbo.

It was more than a little audacious for Boom! to publish three ongoing, simultaneous Planet of the Apes titles (the third exploring the world of the Andy Serkis motion capture trilogy). It’s clear that the two runs involving the 1968 series were both reverent and experimental, not afraid to tie disparate elements together but equally unafraid to embellish the canon with wild new interpolations. It’s a bit surprising that the Serkis era remains uncollected in omnibus form; the foregoing volumes were assembled to capitalize on the original film’s 50th anniversary, but the Serkis films remain popular, though their plot’s reliance on a global pandemic might make them discomfiting.

Equally surprising is that a bulk of Boom!’s anthology material remains uncollected, particularly “Time of Man” and “The Simian Age.” Each omnibus collects a few short stories, but only the ones germane to the main narrative of the volume; there’s ample good material still out there, including work by Matt Kindt and Phillip Kennedy Johnson. Especially with the latter helming the post-Bendis Superman books, such a clean-up collection should be a home run. If nothing else, it’d be a treat to reuse the Mike Allred variants, which see the 1968 apes palling around with actors in mocap suits. That playful spirit, bounded in Allred’s mad mod style, encapsulates everything I love about Planet of the Apes.

Review: Planet of the Apes Omnibus: Before the Fall trade paperback (Boom! Studios)