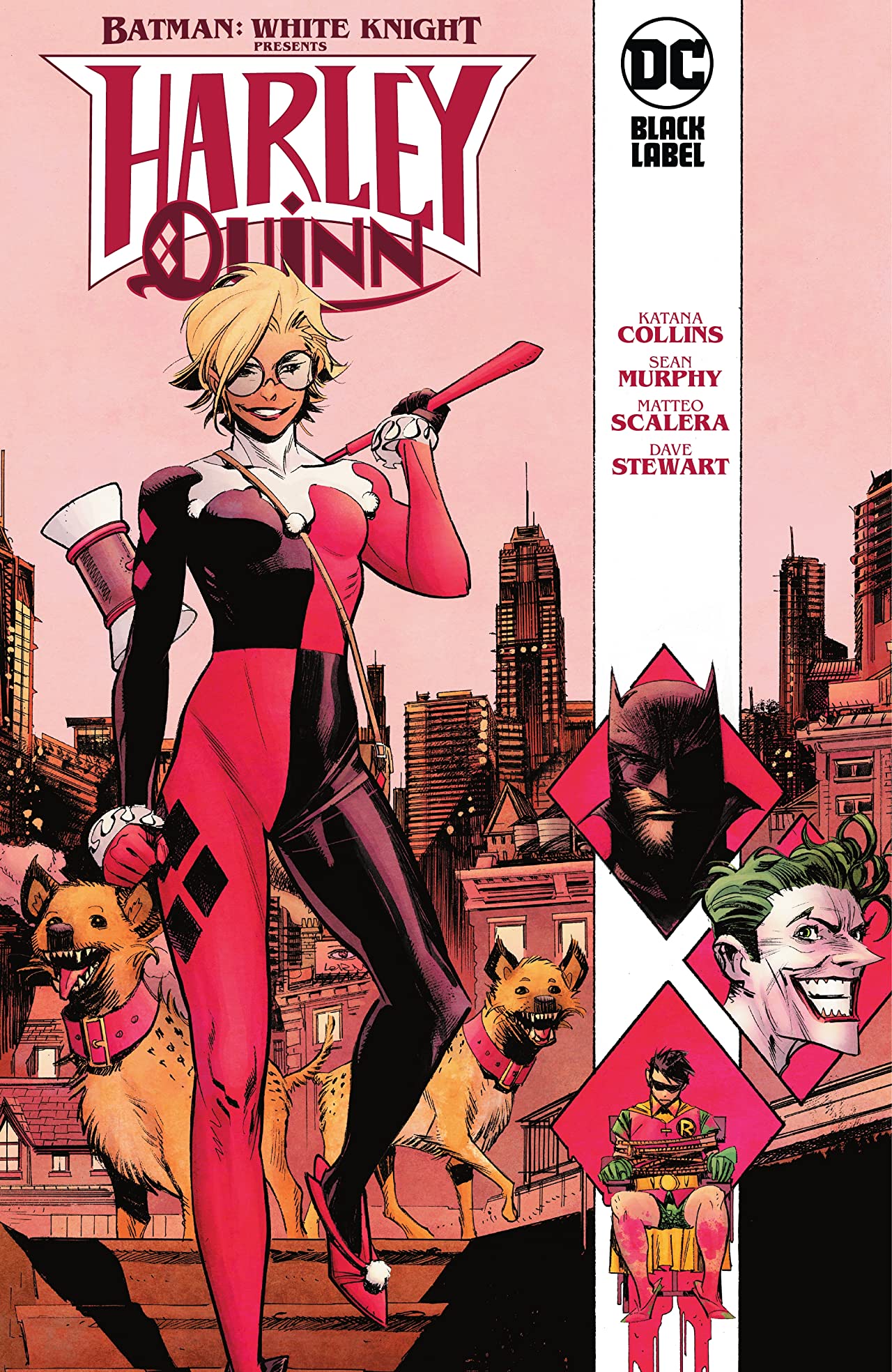 Katana Collins and Matteo Scalera do a fine enough approximation of Sean Murphy’s work in Batman: White Knight Presents: Harley Quinn. My impression is that DC has had far better luck lately with single-voiced imprint “universes” — White Knight and Injustice and DCeased — than they’ve had with loosely knit imprint lines. To see such a thing branch out in a successful way with another creator — Collins writing within Murphy’s universe — should give everyone hope; while Tom Taylor is busy with other things, maybe we can get a DCeased 80-Page Giant with other creators writing stories within the DCeased framework, or some other crackshot writer on a White Knight Presents: The GTO miniseries (really just Duke Thomas), or so on.

There’s some elements here that don’t quite jibe with what we know of the White Knight characters or where we left them, but I know Murphy was involved with this book and that whatever’s here is canon or to be explained. Collins' book wants mildly for a garage filled with cars and an epic widescreen ending, but makes up for it in character work. White Knight’s Harley Quinn is still an odd figure — a criminal profiling savant who’s light years more savvy than her mainstream counterpart even on her best day — but fans of the character should be pleased with her protagonist portrayal here.

At the top I’ll say this book really owes Scalera a lot. It is not as though Scalera’s art looks exactly like Murphy’s, but without Murphy’s art right next to it, it’s a convincing approximation; consider Scalera’s square-headed Bruce Wayne or hook-nosed Jack Napier, just like Murphy’s. This is to take nothing away from the strength of Collins' writing, only that so much of White Knight is wrapped up in Murphy’s visual stylings that something out of DC’s house style would be jarring; that Scalera is so close makes this spinoff volume feel of a piece. At the same time, Scalera and award-winning colorist Dave Stewart give the art a richer, more painterly style than Murphy’s previous two books, giving the volume the slightest intimations of its own identity.

Collins finds Harley Quinn here in both new and familiar territory. She has been side-by-side with the Joker (or Jack Napier, depending) for a number of years, and if not his sidekick then his semi-antagonist, working with Batman for Jack’s benefit. But Jack is dead and Batman in prison, and so Harley struggles with who exactly she is now, even as others still attach identities to her — mother to two children, consultant for the police’s GTO task force. Harley decides in the end she is neither the criminal sidekick Harley Quinn nor psychologist Harleen Quinzel, and at the same time “both”; she ends up down a path we’ve seen more than a few times before, channeling all those personalities into something new and vaguely bat-shaped (or at least gray and black).

I have assuredly warmed to the Harley Quinn character over the years, and I enjoyed reading her here and would certainly do so again. Harley as the new Batman does feel like a little bit of a stretch (though the idea of Harley as Batman with Leslie Thompkins as her Alfred is precious) and the lavish praise foisted on her by Commissioner Renee Montoya in the end comes off forced. Again, I’m happy to see Harley as the hero, but there’s a sense in White Knight Presents that she can do no wrong — Renee thinks she’s great, Duke is a big fan, she’s romantically connected to both the Joker and Batman, and so on. In this, I might have liked to see a little nuance; Harley herself often tells the audience she’s imperfect, but we never quite see her make mistakes.

Collins offers a bunch of untold information about Harley and Jack, including that they first met when Harley was a dancer and Jack was still Jack and not the Joker, well before his dip into a vat of acid. Furthermore, Collins hints at some sort of inherent cause for Jack’s “Joker-ness,” that Harley perceives his discolored eyes and pale skin prior to his becoming the Joker. I thought at first I was mis-remembering details from White Knight and Curse of the White Knight themselves, but I looked back and didn’t find any of it.

Further, there’s an extended sequence in which Bruce Wayne steals Jason Todd’s Red Hood getup for a brief jailbreak. Again, I went back to Curse expecting I’d forgotten something, but it’s not the case. Maybe we’re expected to understand that Jason’s full-face Red Hood helmet is, in this universe, just his motorcycle helmet, but that’s a big assumption when we’re so used to it being something else. In this — Jason seemingly being the Red Hood and also being a captain at the penitentiary where Bruce is held — I felt the confusion of events taking place without the audience’s knowledge; my hope is that we’re to take this as a preview, that Murphy’s next White Knight book will involve Jason and the origins of that cowl.

White Knight Presents has a nice mystery within it. The book is perhaps hampered by being only six issues, such not to have much room for red herrings or real whodunit elements, but I liked Harley in the “too-involved investigator” role (shades of Clarice Starling or Will Graham), as well as the elements of conspiracy in the final explanations. I also enjoyed that Collins did not reveal every secret, leaving the villainous Producer’s identity untold (and giving herself room for a Harley sequel). Compared with the boisterous, fiery finales of both of Murphy’s White Knight books, Harley’s finale is somewhat sedate (and the story in general lacks the social elements that defined Murphy’s books), but neither did I mind this show of range in this third White Knight title.

Sean Murphy did suggest he was working on a third White Knight book, though that was in 2019 and no doubt any number of plans were uprooted since then. One wonders if Batman: White Knight Presents: Harley Quinn was always on the docket or any pandemic upheaval made slotting in a side story necessary. Irrespective, again, I’m pleased to see this indication that DC’s creator-driven universes don’t always need their primary creators to be able to release volumes; hopefully we’ll see both more White Knight volumes proper and more spinoffs alike.

This post first appeared on Collected Editions | Blog, Collected Comics Review, please read the originial post: here
People also like
NVIDIA DLSS Now Available In Major Game Engines With No AMD Alternative In Sight
Top Women in Casino World
The Keys to Business Success | 20-Point Exhaustive Checklist
Why the Riddler is such a good villain for The Batman film