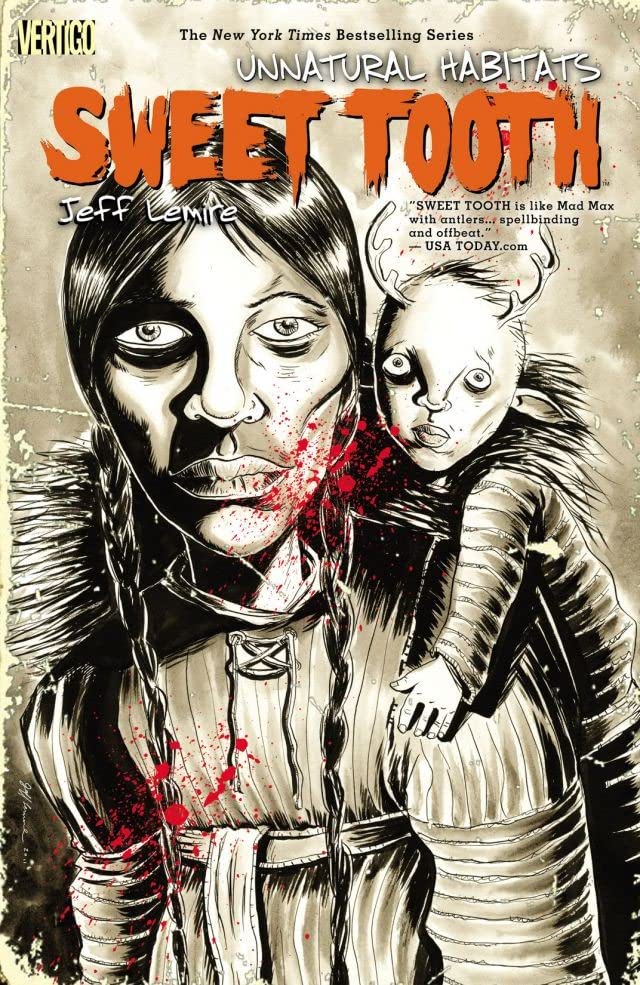 It seems no coincidence that Matt Kindt comes on to draw “The Taxidermist,” the first story of Jeff Lemire’s Sweet Tooth Vol. 5: Unnatural Habitats. This series feels firmly in Kindt’s Mind MGMT territory now, with vast, world-shaking conspiracies that reach back centuries or more. Lemire’s got eight more issues in the sixth and final volume (minus the recent new miniseries) to wrap up this story, in a series that’s barely moved more than inches in the first five books.

At this point, just for comparison, Kindt’s Mind MGMT was also almost done, but felt considerably more ready for that occasion than Sweet Tooth does. Y: The Last Man ran 60 issues, but even if Sweet Tooth ran 20 more issues instead of eight, I’m not sure if Lemire could get there without some serious buckling down. Really what Sweet Tooth needs is the Saga model, 54 issues followed by (what I’m guessing will be) a time jump and 54 issues more.

Indeed, as I speculated before, the fifth volume Unnatural Habitats follows the pattern of the third volume just as the fourth book followed the second — that is, books two and four both see the characters getting in to a predicament and books three and five see them getting out of it. That’s 11 issues for the “Endangered Species/Unnatural Habitats” story that’s not altogether all that complicated, and which other writers would certainly do in half that.

I admire Lemire’s willingness to go slow, and some of the “slowness” comes from the deviation into Gus' visions and etc., which is surely what’s distinguished this series. Lemire has strong characters, and with strong characters we’re willing to hang out for a long time. But unfortunately I think that only works when the writer has as much space as they want and not less than they planned.

By and large, the “Unnatural Habitats” story isn’t all that impressive — the strength of Lemire’s characters and art aside. The audience has sensed from the beginning that the creepy Walter Fish wasn’t a good guy, so while there’s nice drama and deference to the book’s themes in Gus and Jepperd’s makeshift family “splitting” over whether to stay with Fish, we also knew Lucy was being naive and that Jepperd was correct in his paranoia. That Jepperd should learn that Fish is not who he says and have to come to the rescue was entirely predictable, just the same as that Jepperd would turn around and save Gus from the evil Abbot after he handed Gus over to him.

For me the most interesting twist was when Jepperd, on route to rescue his friends, flips his truck on an icy road and is taken by a strange axe-wielding hunter. “Unnatural Habitats” generally follows a familiar “kidnap/revenge” trope, and the give-and-take largely regards male bravado — Fish has taken Jepperd’s “wife” and “children,” and Jepperd goes to get them back. In none of that is there an expected turn that Jepperd would get held up on his way nor he himself kidnapped. Furthermore, as it turns out, Jepperd’s kidnapper is neither deranged maniac nor hybrid-hating militia, but rather one of Jepperd’s old hockey opponents. Jimmy — after keeping Jepperd tied up and threatening him for an entire issue — is all too eager to let him go and help out once he learns who Jepperd is, in near comical fashion.

I will be very interested to see if Lemire keeps Jimmy around and what role he plays in the end. In Sweet Tooth’s world of horror and stranger-danger, Jimmy is a bizarre touch of normalcy — a friend from the old days, someone who seems devoid of secrets or agenda. But I can’t see Jimmy becoming a traveling companion; if nothing else, in an already-packed roster, Lemire has no need for another male lead so similar to the one he has already. So where does Jimmy rest against the theme, and what will be for instance the last time we see him? Cannon fodder is certainly one possibility, a victim of Abbot right on their heels. I’m curious to find out.

The weightier part of Habitats is “Taxidermist,” Lemire and Kindt’s collaboration. Here we’re shown many of Sweet Tooth’s core elements — the sickness, the hybrids — but set against the Arctic in 1911. Something else — that “Tekkietsertok,” the name written in Gus' father’s bible, is an Inuit god, whom an English missionary believes he’s angered. I was watching the Sweet Tooth episode “What’s in the Freezer?” the other night, when Gus does a little animal-taming, and I was given to wonder, what if Gus is some sort of animal avatar, an animal god? (Lemire writing Animal Man makes more and more sense.) How he came to live with his father is still a question, as well as why his father wouldn’t be more forthright about Gus' heritage, but a mythological answer makes more and more sense. (And Kindt drawing beleaguered explorers and demonstrations of strange power evokes Mind MGMT strongly, making one wish even for a crossover.)

The cover of the next volume, Sweet Tooth Vol. 6: Wild Game, shows Gus as an old man — or, at least, shows an antler-headed old man. My sense of Sweet Tooth has been a book that would work in a time-based fashion — this set of stories is when Gus is relatively young, and then this set when Gus is a teenager, becoming a grown animal-man, etc., again not unlike Saga. Maybe that’s where Lemire is headed — given a sudden conclusion, we’ll follow Gus swiftly through the various stages of his life. But I’d be equally pleased if Lemire didn’t try to wrap Sweet Tooth up — if the final volume is just another volume with no great attempt to conclude, and then miniseries like the recent one (some half-dozen-plus years later) can then wrap things up. No ending, I’m thinking, would be better than an unsatisfactory one.

Given all the time in the world, Jeff Lemire’s Sweet Tooth Vol. 5: Unnatural Habitats is fine; the larger story doesn’t move forward much, but Lemire’s epic remains plenty enjoyable. Given just one more volume, however, no telling what’ll happen next.

This post first appeared on Collected Editions | Blog, Collected Comics Review, please read the originial post: here
People also like
Charcuterie In A Jar: The Savory Jarcuterie
Merit Badges and Early Retirement
Intel Rocket Lake Details Revealed: Finally Not Skylake, But Still 14 nm
Two Tools That Help Me and Others Navigate Depression
Small Business Administration Loans: Understanding the Options for Dentist Owners
Tomcat Tompkins – Part 6
Glory Days Grill: Committed to the Love of Food, Sports, Community and Its Franchise Owners
Who is Moon Knight? Learn more about this character, and why we are excited for his MCU debut.
Keane Interest: Jazz Fest, Costumes on Etsy, Mother Ruckers and Hurricane Dorian
THE ONE
Why do Teeth Hurt when Eating Sweets? Causes & Prevention