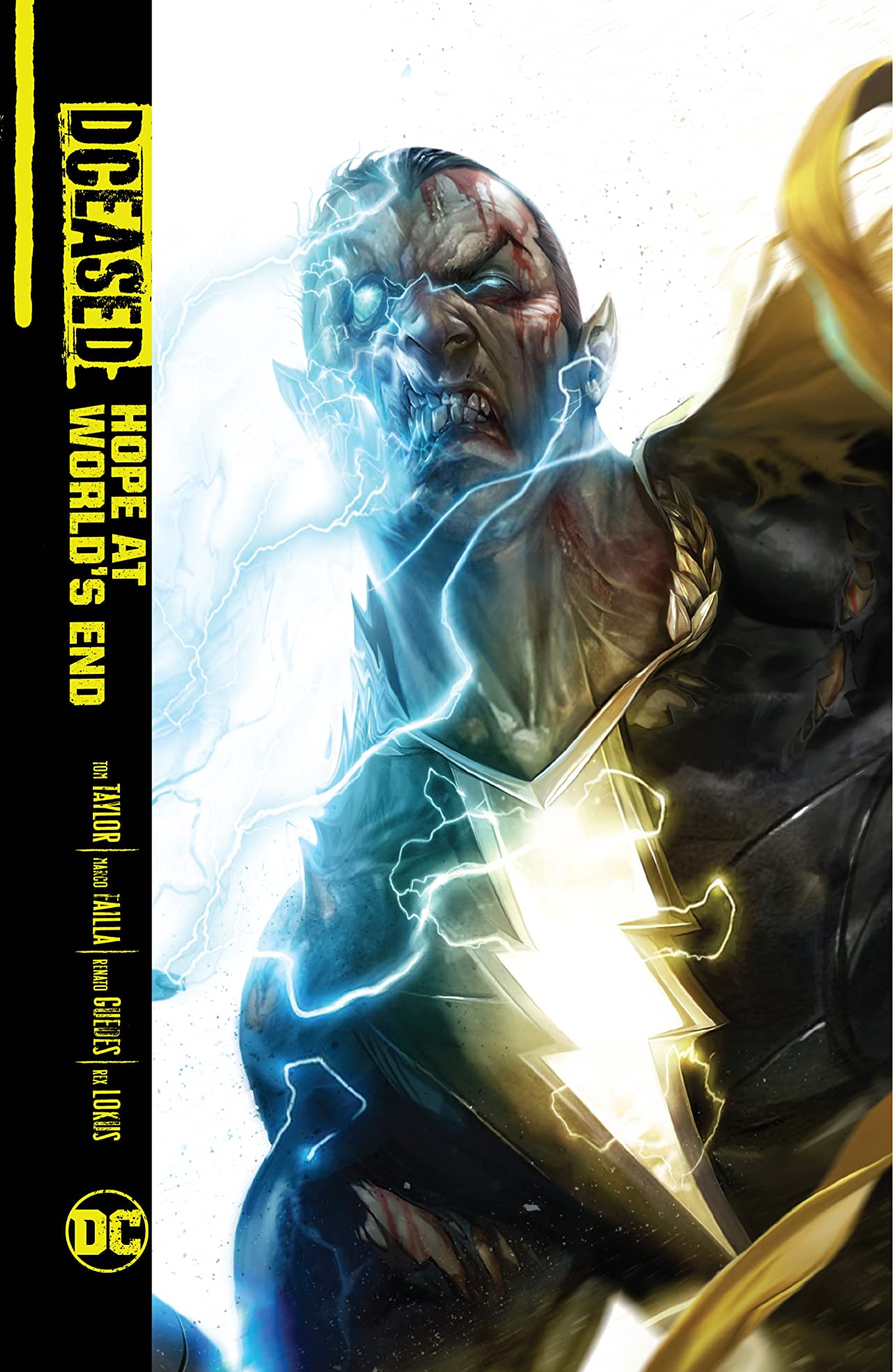 DCeased: Hope at World’s End is another pleasant interstitial entry into Tom Taylor’s rapidly growing DCeased line. “Pleasant” may not be the ideal way to describe a tale of mass destruction and zombie apocalypse, but particularly with Jon Sommariva’s more animated art on board, Taylor’s tone comes off not so much horror as youthful superhero hijinks with a touch of the heist movie at the end. This is not the most emotionally affecting DCeased entry, but one gets the sense of it being intended to check some very specific boxes for DC, and Taylor accomplishes that while still delivering plenty of heart and humor.

I’m pretty sure Black Adam right on the cover of this book is no accident, any more than Black Adam getting his own “Endless Winter” special or joining the ranks of the newest Justice League is an accident. DC’s got a lot less “ready for collecting” Black Adam material in their line than they do for Wonder Woman or Aquaman, all the more reason to have him feature in a low-stakes, digital-first DCeased entry ahead of his movie debut.

It is not as though Adam gets a lot of screen time; once turned to an Anti-Life zombie in the book’s second chapter, he is mindless most of the rest of the time (if Taylor had original plans for this story and they didn’t involve Black Adam, one sees easily how he could have been slotted in). But ultimately it’s apparent (if unfortunately not too explicit) that this story turns on the different philosophies espoused by Black Adam and Superman — Adam sees fit to slaughter the zombified people of Kahndaq in order to slow the infection (but is still zombified himself); Superman remains steadfast in not killing the zombies for even the slightest chance of saving them and ultimately manages to save lives, at least within the confines of this book alone.

Indeed Hope at World’s End is a hopeful book; taken on its own, it rather seems the heroes end up in an auspicious place and might just find what they need to save the day. Given DCeased proper, however, we know that just shortly after these pages Superman himself will turn, taking Wonder Woman with him, and the remaining heroes will desert Earth entirely (at least until the sequel). Blithely, perhaps, but interestingly, this is the “happy” telling of DCeased taking place alongside the original, with Martian Manhunter J’onn J’onzz remarking what a “good color” green is on Black Canary, never mind that she became a Green Lantern after having to murder her zombified long-time friend Hal Jordan.

World’s End is also a nod to the rapidly growing Taylor-verse, with characters Wink and the Aerie from Taylor’s Suicide Squad: Bad Blood as two of the protagonists. (I imagine the crossover audience between Suicide Squad and DCeased is already pretty strong, but maybe having these characters in one book would lead readers to check them out in the other.) Wonderfully, the tick-tock scheme to defeat Adam in the end comes down to Wink, Aerie, and Pied Piper (with partner David Singh), letting Taylor spotlight some of DC’s LGBTQIA+ characters (pity this only seems possible in a digital-first and not mainstream series, but welcome nonetheless).

Another of this series' purposes seems to be to spotlight DCeased’s new “young” Justice League ahead of their return in DCeased: Dead Planet; not that Superboy Jon Kent, Wonder Girl Cassie Sandsmark, and new Batman Damian Wayne didn’t appear in the first DCeased, but they get additional fight time (and hug time) in this one. (It remains odd to see Cassie slotted with the two characters who are not “her” Superboy and Robin, but I can’t see as how Taylor had a Wonder Girl alternative.)

But World’s End’s greatest triumph, whether an initial marching order or not, is its introduction of Spoiler Stephanie Brown into the DCeased-verse, back in her Robin togs (by way of Taylor’s twisty DCeased continuity buffet that also sees Max Mercury, Jesse Quick, and Atom Smasher existing alongside Jon Kent). Taylor’s Stephanie is a hoot, reminding us of his talent for smart-aleck characters (also resurrecting the long-past camraderie between Stephanie and Damian from Bryan Q. Miller’s Batgirl series). Between World’s End and Batgirl/Orphan Cassandra Cain in DCeased: Unkillables, I’d be more than happy if Taylor got the rumored new Batgirls book. Though Stephanie is killed by Black Manta, I was pleased to see the hint she might be revived, and I’m hoping she makes an appearance when we pick up with Dead Earth.

Within DCeased: Hope at World’s End, perhaps owing to its digital-first status, there’s some push and pull in terms of what the series wants to be, multi-part epic or anthology. Vignettes of Flash Wally West and Detective Chimp teamed with Krypto suggest one thing, and then the book gives way in its last 30 pages to another, something a bit more direct. It’s another way (plus a flashback break between two issues that I had trouble catching on first read) that World’s End distinctly comes off as filler, lesser again that DCeased or the truly excellent Unkillables. But the fact that even Tom Taylor’s filler reads so well further proves what we already sense, he’s a writer on the rise, and I’m eager to see what the strengths here develop into in the future.

This post first appeared on Collected Editions | Blog, Collected Comics Review, please read the originial post: here
People also like
Easy Pet Rocks Craft Idea For Kids
The Sign of Four
10 of the best rural glamping hideaways in Britain
Proven Methods for Successful Weight Loss
Social Security Disability Insurance: See if You Qualify and How to Find Adequate Help to Get It
“The Friend Who May Not Seem a Friend” – The Cat and the Fire, Post 2 of 3