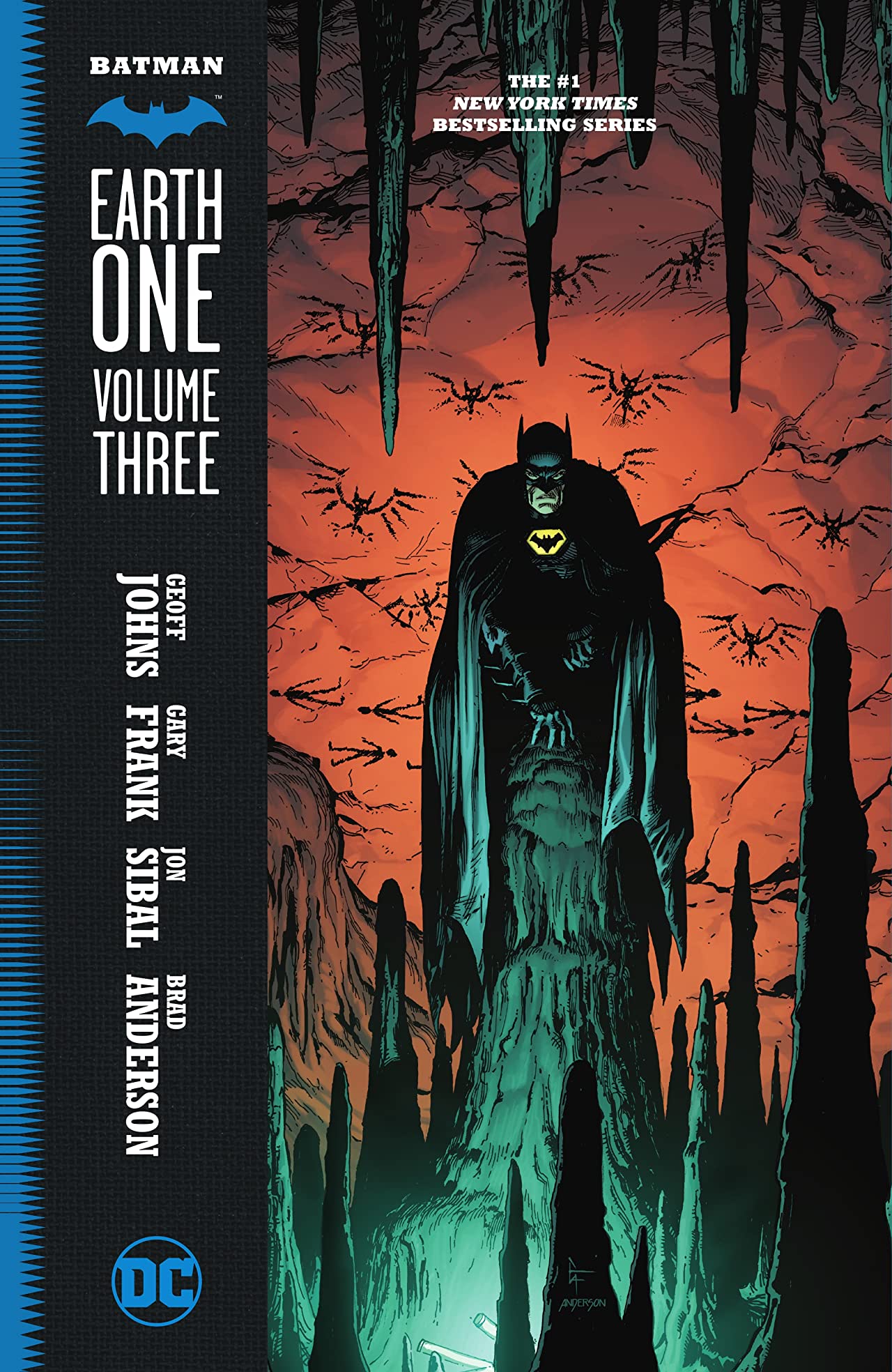 Geoff Johns' Batman: Earth One Vol. 3 begs a sequel; if Johns and artist Gary Frank were to one day deliver one, they’d have produced more Earth One volumes than any other creators. The quality of this story is good, even if it becomes a little incomprehensible in retrospect. I’d be pleased to read another, disappointed if it never comes, and hopeful it doesn’t take another six years to do so.

Johns and Frank’s early decision to show this Batman’s eyes throughout the books (instead of the familiar white-covered eyes) brought humanity to a young and often stumbling vigilante, learning first to jump rooftops and second to follow his new foes' clues. In this third book, Johns' Batman is more self-assured, not now all that different from common portrayals, though still building his nascent Bat-family. In this, and Frank’s sharply angular, molded cowl, one is put in mind of Jerry Ordway’s movie Batman: 1989 movie adaptation, and from there the Michael Keaton movies.

It’s a certain flavor of Batman that I think most will find appealing, with echoes especially of Batman: The Long Halloween around the edges. There is not much new said about Batman here, rather instead a retooling of more popular elements of the zeitgeist, but neither is it poor; Johns' writing feels relaxed after the meta-heavy Doomsday Clock and Frank’s art is crisp, and that makes for a fine if not particularly heavy reading experience.

There’s an interesting give and taken with this third volume’s ending — the initial suggestion of another book in the quick hit proto-origins of Dick Grayson and Rory Regan, which is then stymied by the flash-forward to Dick and Rory as part of the Bat-family as Robin and Ragman, alongside Batgirl Barbara Gordon, “the Cat,” and Killer Croc. That kind of “panning out” suggests the end of Batman: Earth One is here for good, only for that itself to be stymied by Johns' shocking last page introduction of Batman: Earth One’s Joker.

It’s a cliffhanger that seems to suggest the intention of another book, though my theory is that DC’s Earth One line is essentially dead, aside from perhaps finishing out a contract on Green Lantern: Earth One; we surely won’t see any new Earth One series starting. They have never been barn-burners, largely I think due to the slow release of individual series volumes, aside from blips of interest here and there.

It’s proven true in the last 10 years that a special line of graphic novels isn’t necessary in order to do early, modern, or alt-continuity takes on DC’s characters, and that these, often as miniseries subsequently collected, can do just as well if not better — see Injustice, DCeased, and Batman: White Knight, to name a few. There’s no creators attached to new Earth One projects, the DC regime that conceived of them is essentially gone, and I think Earth One is gone with them. One really has no idea what’s happening with Johns and DC these days, letting alone whether it’s worth Johns and Frank to keep doing graphic novels for DC versus creator-owned work.

So it could go either way — Johns intends to do another, or Johns finished the story with the Earth One Bruce Wayne building a new family from the literal ashes of his old one and Joker’s appearance is just a tease, a “you can imagine what happens next” kind of thing. My hope is the former, mainly because Batman: Earth One Vol. 3 does not particularly answer many of the questions it raises itself, leaving the legacy of the whole series somewhat flawed without the opportunity for those explanations.

To wit, rather in the manner of Batman: The Long Halloween, I believe we’re supposed to understand through most of the book when Jessica Dent is speaking with her brother Harvey, she’s actually talking to herself — see, for instance, the particular angles of the car scene late in the story. That would answer everything — Jessica is simply insane — were it not for Batman actually getting to speak to Harvey over the phone. At first I thought this was supposed to be the work of the book’s Clayface, but he’s in his guise of Adrian Arkham at the time and under Alfred’s observation. Not that Clayface couldn’t have a cell phone hidden in his … clay, not that he couldn’t sneak away from Alfred long enough to make a phone call, but one would imagine if there was that kind of scheming, Johns might have made it more explicit. (Also who the figure was Jessica saw in the parking garage, unless that was a delusion.)

And so we return to the Joker. An easy explanation for all of this is a third party involved, and this manipulation of “Two-Face” by the Joker reminds of Batman: A Lonely Place of Dying. Joker on the phone, Joker laying the groundwork for chaos in Gotham’s streets and so on. The Joker’s final dialogue with the Toyman does not specifically confirm Joker’s involvement in Toyman’s weapons running, but it doesn’t discount it either. (There might be some questions still out there about the Riddler’s motivations, too.) I’d like to see a sequel to affirm Johns has this under control, that there aren’t loose threads so much as a story revealing itself slowly, but whether that’ll happen remains to be seen.

In the third Batman: Earth One volume, the Batman persona is a curse, apparently. Johns' big twist in his conception of this alt-Batman is that Bruce Wayne is a joint scion of the Waynes and the Arkhams, with Arkham madness always nipping at his heels. Adrian suggests at one point that the 18th century Arkhams' madness came from bat bites (a fraught suggestion in the here and now), such that Bruce is just another cog in the mad machine; given ancient drawings of bats on the wall, I thought Johns might be heading toward a mention of Barbatos (but he did not). A lot of that comes to question with the revelation that Adrian is Clayface, however; none of what we learn in the book can be considered true (a failing, perhaps), and ultimately Bruce has as few ties to his past as he did before when he finally embraces his “Outsiders” instead.

But whereas the themes inherent in Geoff Johns' work are often too explicit, if not outright spoken, in Batman: Earth One Vol. 3 Johns seems more reined in and subtle. If Gary Frank’s luchador-inspired Catwoman is a bit over the top, the rest of the book is plenty enticing, and Frank convincingly depicts some startling gore in the final battles. There is every possibility this is the final Earth One book; if so, it’s solid, even if the line as a whole never quite delivered on all the expectations we put into it.

This post first appeared on Collected Editions | Blog, Collected Comics Review, please read the originial post: here
People also like
20 Best Family Games To Play On A Road Trip
Giant Piece of Space Junk Expected to Crash into Earth this Weekend
Tea Culture in Different Corners of the World
How To Get Rid of Ticks in the Yard – 8 Steps
Top Tips for Same-Sex Couples to Save Money
Crackpot Cryptography and Security Theater