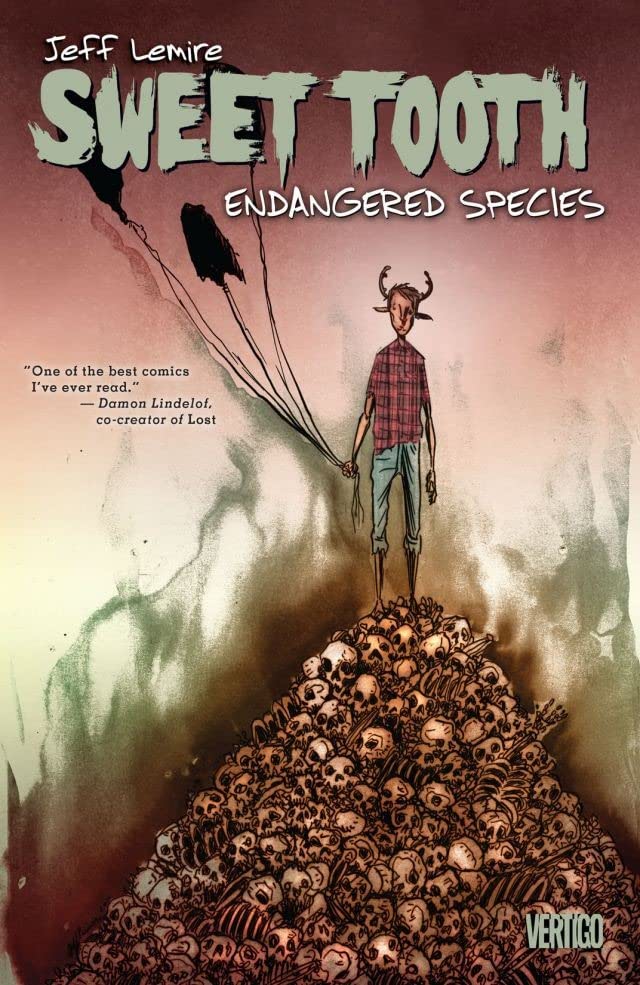 As would seem only appropriate for a Book about animal-human hybrids, the natural and man-made worlds clash in Jeff Lemire’s Sweet Tooth Vol. 4: Endangered Species — not to mention the influence of realms mythological and spiritual. Familial bonds strengthen but also wither; the group gets on the road, only to pause in place.

In this way, the fourth volume is more like the second than the third — a stage play, a bottle episode. It works better than it did before, perhaps because here the close quarters serve to increase the paranoia and heighten the tension. At the same time, I’m very cognizant of a lot to wrap up with only two volumes to go, not enough room to emphasize so heavily character over plot. If I understand correctly, Lemire expected more issues than he got, which explains some of this, but I’m hopeful for a satisfying ending and this trend of taking one’s time, understandable as that may be, makes that ending increasingly uncertain.

After what felt like a slow start, this series really got moving in Sweet Tooth Vol. 3: Animal Armies, in which Gus and Jepperd each had to make wrenching choices, and the story ended seemingly with a core cast and mission intact. At the start of Endangered, Lemire treats us to just one prose-enhanced issue of peace, with a storybook air and winter wonderland finish, before things begin their decline — kidnapping, strangers, danger, and death. A little more than a half-dozen issues later and the nascent family is already fractured, with Jepperd exiled and uncertain whether he’ll see Gus again (though good chance he will).

The factors at play are nicely complicated. On one hand, it seems that Lucy breaks with Jepperd over his mistrust of Walter, a man who finds the group and offers them extensive shelter, but on the other hand, the trouble starts before that, in that Lucy has caught the sickness but is hiding it from her companions. Given this, the opportunity for succor seems too precious to pass up, especially given that Lucy believes she won’t be around to care for the group too much longer herself; additionally, one surmises, it may be easier to send Jepperd away than subject him to the hurt of another loved one dying. Either way, the book ends with most of the group entombed in a large dam, with Jepperd on the outside.

Again, with two books left, we might as well be headed to Alaska by now, but I wouldn’t be surprised if Lemire sticks around (which, if so, would make books four and five similar in structure to books two and three). Walter is too creepy to be without guile, such that remaining with him can’t possibly be Lucy and company’s happy ending; as well, the evil Abbot is on the way, plus the presence of whatever faction that the group encountered in the woods. That’s danger from within and without, coming from both sides, and I can as soon see Lemire picking up with Jepperd, Singh, and Gus on their way to Alaska as I can that the next book will be about Jepperd having to both rescue and then defend the others in place.

I’m only two episodes in to Netflix’s Sweet Tooth but four volumes in to the comic, so you can see what’s outpacing what here. While the first episode, “Out of the Deep Woods,” hews relatively close to Sweet Tooth’s first issue, coincidentally I thought the second episode, “Sorry About All the Dead People,” had a lot in common with Endangered Species. We’re far away from Walter and the dam and etc., but here “Big Man” Jepperd and Gus encounter a similar opportunity for respite, a visitors center where a young family lives relatively well. There’s a similar and interesting undercurrent of mistrust, a worry about what it means when a stranger arrives at your door or a stranger invites you in, that’s present in both the episode and this volume.

(I noticed too that in the second episode, Netflix’s Sweet Tooth begins leaning into the pandemic era in which it’s arrived, with some knowing juggling of masks and so on. There’s no small amount of truth being stranger than fiction in reading Sweet Tooth, not in the least that the kind of global plague that seemed science-fiction in the early 2010s seems all too real now.)

Gus seems more animalistic in the television show than in the book; aspects like Gus' enhanced sense of smell and night vision are emphasized in the show (albeit two episodes in) but I haven’t caught that same emphasis in the book. However, the natural world has appeared in big and small ways in the book, and Endangered Species offers the curious sequence where Gus and Jepperd are attacked by a bear. The bear dispatches with Jepperd immediately, but Lemire shows us the bear’s confusion at what exactly Gus is, with visions not unlike the mad sketches in Gus' father’s bible. As mentioned in earlier reviews, the sci-fi explanations for all of this seem less all-encompassing all the time (versus an easier lift for Y: The Last Man for instance), and instead we seem to approach the realm of elemental avatars and morphogenic fields. What Sweet Tooth might eventually reveal is that Lemire writing Animal Man some time later might have been even more apropos than I knew.

So, given Sweet Tooth Vol. 4: Endangered Species, I’ll be curious to see where we end up at the end of the next, and penultimate, volume — are we trekking to Alaska at last, or will all the time be spent here at the dam? There’s not that much space left to meander — the end of the road is coming up fast.