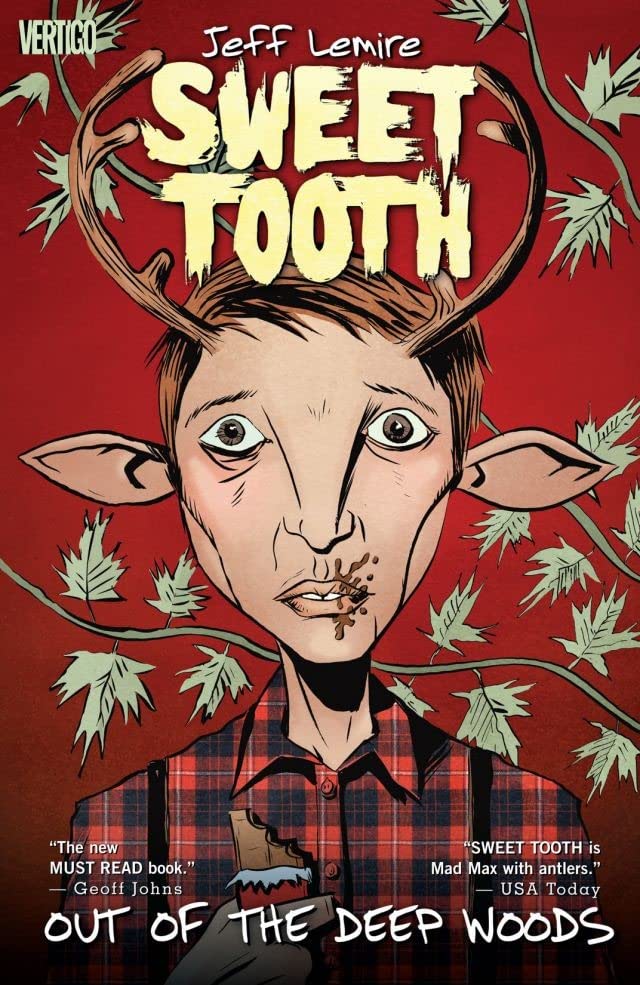 Obviously I’m taking the opportunity of a lull in my comics pull list to check out Jeff Lemire’s Sweet Tooth because of the TV show premiering on Netflix. Also because, with Mandalorian, Bosch, Titans, and Doom Patrol all on hiatus and not scheduled to reappear for at least a month at earliest, I’m looking for a streaming show to watch. The pastel-tinged fantastical of the Sweet Tooth trailer wasn’t quite up my alley, but the comics series seems to have been popular and I’m always happy to support Jeff Lemire’s work.

Why Furries Make Excellent Hackers
How Does the Fortinet Firewall Work?
Blooms with a view: 10 of Britain’s b…
Holcim Philippines shares contributio…
How to Get Rid of Ants

Now, I haven’t actually started watching Netflix’s Sweet Tooth yet, but I did finish reading Sweet Tooth Vol. 1: Out of the Deep Woods and — you in the know probably saw this coming — it seems to me there’s quite the divide between Sweet Tooth the comic and the tone of the trailer, at least, for the Sweet Tooth TV show. That is, I was expecting more Fables than The Walking Dead, and for me the first volume of Lemire’s Sweet Tooth leaned more toward The Walking Dead. This is just a review from the comic side, but I’ll be curious to see online any controversy from audiences going from the TV side to the comics; if you were expecting wide-eyed wonder and instead got bloodied heads, you might feel misled.

Again, I’m just at the beginning of a series over 10 years old, so if what’s struck me from the first volume of the book seems naive from the perspective of history, I hope you’ll forgive. It seems to me over the course of Deep Woods' five issues, Lemire sets up but then deconstructs the well-used trope from Westerns on out (up to and including The Mandalorian) of the violent drifter whose heart is turned and ferries a small child to safety. We think we see it here, with Jepperd taking “Sweet Tooth” Gus to “The Preserve,” but instead in the end Jepperd leaves Gus in the hands of nefarious-seeming scientists.

Perhaps Jepperd will be right back in the next issue to offer Gus a rescue — probably Lemire is not done with the character for good — but I’d be just as happy, and maybe more impressed, if that was the extent of the role Jepperd played. That would be a cruel thing for Gus, but equally it would be anti-Hollywood, anti-trope, and these days that would be more refreshing than a story that follows the common patterns (given Din Djarin and “the Child” were pretty much chained at the hip by the end of episode two).

Jepperd really betraying Gus (and the reader’s expectations) would also fit well in the fact that this is an awfully dark book — surprisingly, again, given the lightness of the Sweet Tooth TV trailer. One might even wonder if Lemire would be happy with the seeming Disney-fying of Sweet Tooth, but as far as I can tell Lemire had a hand in the adaptation and hasn’t expressed any misgivings. Though we’re not of course on Walking Dead levels here, the Sweet Tooth comic doesn’t shy away from gory bullets to heads, bloody fight scenes, and plenty of desiccated corpses. On one hand I’m glad to see horror coming out of Vertigo that’s less supernatural, more post-apocalyptic; it’s just not what I was expecting.

There’s no small amount of fairy tales turned on their heads in Sweet Tooth, including the implicit and explicit comparisons of Gus to Bambi. I wondered too, unless I missed a deeper reference, if we were supposed to see Pinocchio’s Geppetto in Jepperd, the old man who takes under his wing a hybrid puppet-boy. I can’t stretch the metaphor much farther than that, except that Gus has now been delivered perhaps to a pseudo-Pleasure Island, but should a giant whale come into the later story then I’ll know I was on to something.

But more unsettling in Deep Woods are the dark religious undertones, that Gus and his father pray with almost cultish fervor, cut off as they are from the rest of their plague-stricken world. Notably among Jepperd’s first lines is, “Ain’t no God here”; he represents the anti-religious influence on Gus, who’s growing up and branching out from his sheltered childhood with this adventure. Narratively, we’re trained to see insularity as a detriment, exploration as a virtue, and so we side with Gus when the ghost of his father accuses him of sinning for having left their woods. But at the same time, as Jepperd and Gus get closer to the Preserve and Jepperd stops talking, the pair resemble nothing so much as Abraham and Isaac (with Gus being both child and sacrificial animal in one). As far as Deep Woods is concerned, Gus should not have left the homestead, there are bad things out there waiting for him, and so Gus’s father is proved right, with Gus now navigating a hellscape of his own foolheartiness.

So there’s plenty in Sweet Tooth Vol. 1: Out of the Deep Woods and the others to pique my interest as I keep reading. Will Jepperd return? Will writer/artist Jeff Lemire make this a redemptive story or lean in to the darkness gathering around the edges (the preview of the next book, a wonderful thing in and of itself, emphasizes torture and pain coming for Gus)? Will Gus rise above his father’s influence or always fault himself for being curious about the world (Gus' original sin, if you will)? There’s also the time discrepancy, in that Gus seems to have been born well ahead of the other child hybrids and may have caused “the accident” (with shades of Y: The Last Man1), that I’m curious to learn more about.

This post first appeared on Collected Editions | Blog, Collected Comics Review, please read the originial post: here
People also like
Why Furries Make Excellent Hackers
How Does the Fortinet Firewall Work?
Blooms with a view: 10 of Britain’s best spring walks
Holcim Philippines shares contributions to environment stewardship in govt, private sector talks
How to Get Rid of Ants
“The Friend Who May Not Seem a Friend”: The Cat and the Fire, Part 1 of 3