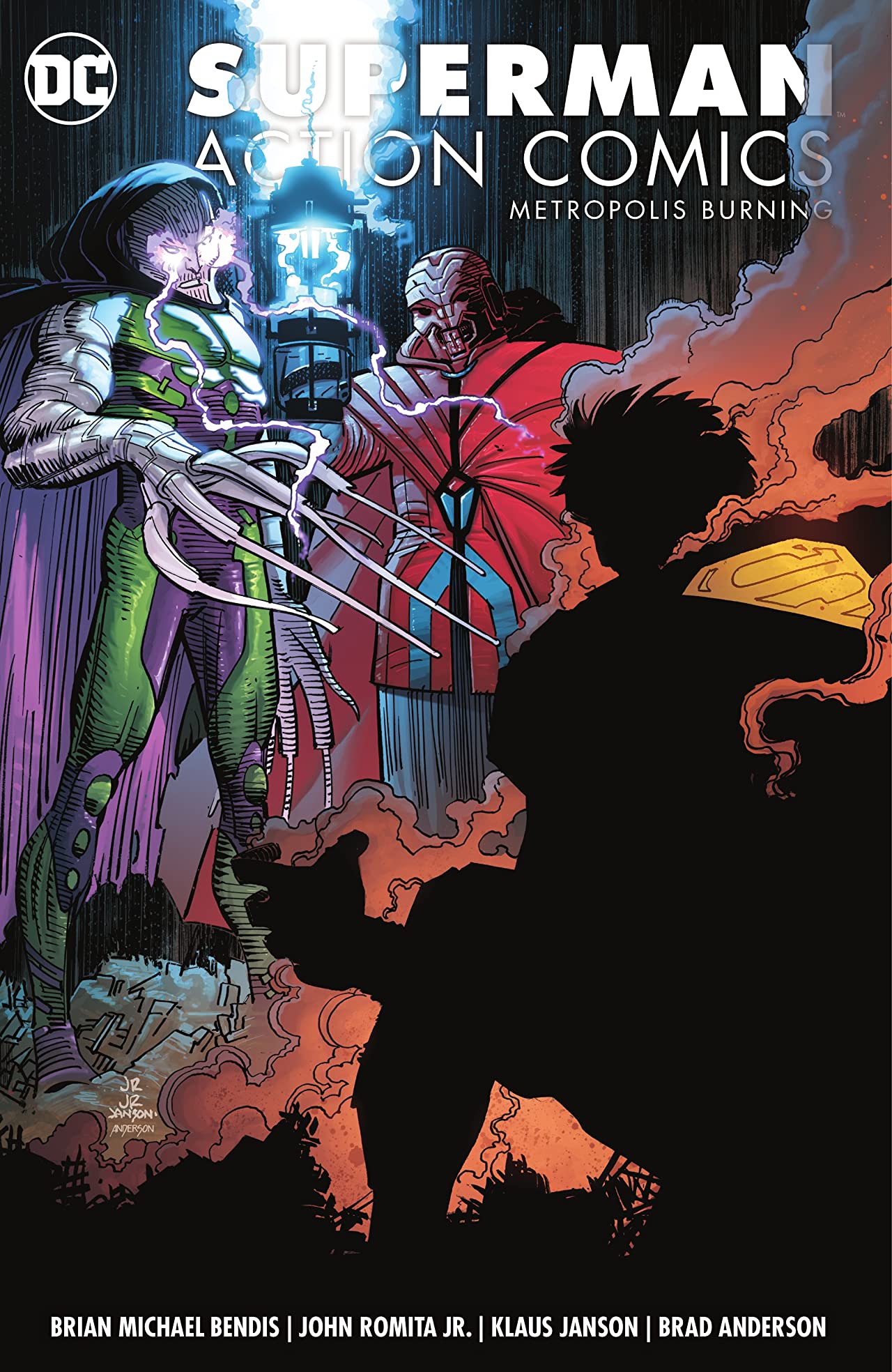 Superman: Action Comics Vol. 4: Metropolis Burning is kind of nuts, but I found it kind of nuts in the most refreshing way.

Writer Brian Michael Bendis is back with his unique dialogue patois, bringing it not just to Superman, the Justice League, and Young Justice, but also Lex Luthor, the Legion of Doom, and Bendis' prized creation Leviathan. Long-time comics artist John Romita delivers his signature style, all shading lines and blocky, immobile figures. Both writing and art are maniacally unpolished, and that’s even before a story that’s the equivalent of throwing a box of action figures at each other while simultaneously trying to shoehorn into the smallest continuity gap possible.

Of late I’ve been dissatisfied with a couple of DC books I’ve read, stories that often seem just marking time alongside sometimes a half-dozen or more mid-level artists on a single Book, all offering dubious takes on DC’s staid, traditional house style. In Action Comics, Bendis is clearly Bendis and Romita is clearly Romita, and their work is both authentic and unapologetic. The creators' idiosyncrasies might fairly be called flaws, but I found this break from the everyday a treat. I would much prefer two creators bringing their own inimitable styles to the fore than others trying the same old tried-and-true with various degrees of success.

Even though contemporaneous with the Man of Steel revealing his secret identity to the world over in Superman, Action is set — with no small amount of whiplash — a few days before. Astounding that Bendis is writing both books, and again to an extent it’s so insane that I can’t help but admire Bendis' gusto. Metropolis gets wrecked here — really, really wrecked, with Romita drawing giant arial damage shots — and all of this is as if it never happened in Superman, even as far as the two books' conceptions of Lex Luthor being slightly different. Further, even the Justice League Vol. 5: Justice/Doom War and Year of the Villain events that this story was supposed to precede were about done by now (and this collection was published well after those); to a certain extent Bendis gets his own mini-event here with all the trappings of Scott Snyder’s run-up to Dark Nights: Death Metal even as it doesn’t actually quite fit.

The differentiating factor is Bendis' Leviathan, who teams up with and then totally betrays and outmaneuvers Luthor and his Legion of Doom. Though I suspect no actual animosity between creators, this could be viewed as Bendis' recompense after his Event Leviathan miniseries was largely swept under the rug in favor of the aforementioned run-up to Death Metal; here, Bendis proves Leviathan a greater threat than those measly villains. It reads, again, like Bendis playing with all his action figures at once on the page, even those who don’t necessarily fit together, but there’s a base joy in that that’s hard to beat.

Almost five full issues of a hero and villain knocking each other around wouldn’t ordinarily find my favor, but Burning is more than that — it is the Justice League versus the Legion of Doom, and without any of the Perpetua trappings, giving it a significant Challenge of the Super Friends vibe. (How often, for instance, do we get to see Gorilla Grodd throwing Superman around?) I would almost venture this is more the Legion of Doom’s book than Superman’s, like one of James Tynion’s interstitial Doom issues in Justice League. The book is at its most priceless in the flashback scenes of Luthor trying to hold business negotiations with Leviathan while Brainiac, Grodd, Cheetah, and Sinestro chew the scenery behind him, the world’s greatest villains filtered through Bendis' hipster-banter machine. Bendis' Leviathan himself gets the longest speeches, the most lofty oration, making him a wet blanket over the proceedings, but clearly Bendis is entertained.

Another particularly strong quiet moment, early in the book, is when fire chief Melody Moore tells Clark Kent about her intention to run for mayor, and so some days before Clark reveals his identity to the world, he goes ahead and reveals it to her. Melody debuted in Bendis' Man of Steel miniseries and I don’t feel we’ve seen her near enough since then — frankly, I do wonder whether Bendis will be able to satisfactorily wrap up his overarching “Invisible Mafia” storyline altogether with just one more Action volume to go. I was just thinking the other day that it felt like Bendis had dropped the ball with the Melody character and here she is getting let in on Superman’s secret early; it’s not a development with much plot heft, but a nice indication that Bendis hasn’t forgotten all of what he’s set up.

Romita gets to draw a great cross-section of the DC Universe, even if many of the characters start and end the story unconscious in the rubble of Metropolis. Again, one can see the idiosyncrasies here as flaws or not; I think Romita’s style is just far enough on this side of “traditional” that the vacant stares or Grodd’s ever-evolving visage don’t get the same kind of passes we might give the absurdist styles of Kelley Jones or Riley Rossmo. But aside from the arm-and-leg-flailing fight scenes, Bendis also gives Romita (with inker Klaus Janson) plenty opportunity to draw darkened alleys and clandestine meetings with aplomb (as well as big bright explosions). Again I think Romita’s range and gusto speak volumes even if his work isn’t as compact as DC house style.

It would be easy to dismiss Brian Michael Bendis' Superman: Action Comics Vol. 4: Metropolis Burning because despite being ostensibly a big event (or at least having a lot of scope), it’s clear early on that even the writer himself won’t be making much it in favor of other big events he’s got going on in his other titles. That’s weird, and I’m not sure if it’s an indication of Metropolis Burning falling victim to DC’s other, shifting plans or if frenetic was just what Bendis was going for. Even so, when other books don’t seem to take risks, don’t seem to go for big screen bombastics in favor of not rocking the boat, I’m glad to see Bendis and John Romita putting their years in the business to good use here and not caring who sees it.

This post first appeared on Collected Editions | Blog, Collected Comics Review, please read the originial post: here
People also like
The Sign of Four
10 of the best rural glamping hideaways in Britain
Proven Methods for Successful Weight Loss
Social Security Disability Insurance: See if You Qualify and How to Find Adequate Help to Get It
“The Friend Who May Not Seem a Friend” – The Cat and the Fire, Post 2 of 3
Music Profile: Elliott Waits For No One - Alternative Rock Band - Illinois, Usa | SRL Networks London Music PR