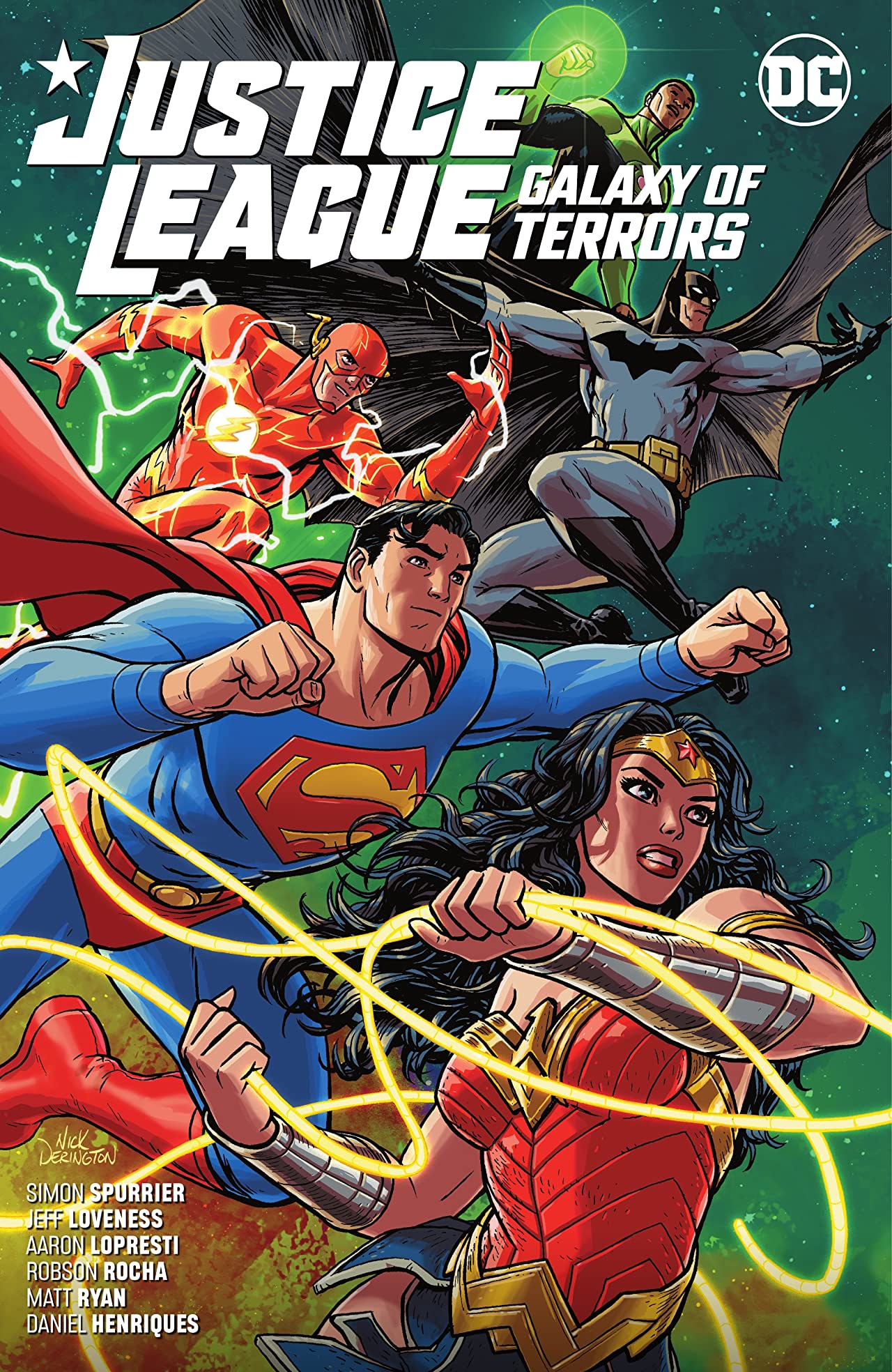 We’re in this place now where we occasionally get to, at the end of one DC storyline era and just before the beginning of another, where sometimes titles go on even as they naturally should have stopped. We saw this, for instance, with Christopher Priest’s short stint on Justice League after Bryan Hitch’s run, as the book waited out Dark Nights: Metal and Justice League: No Justice. And we see it again now, both with the previous volume and Justice League Vol. 7: Galaxy of Terrors, a collection of interstitial tales published so that the Justice League title doesn’t miss a month even if it has nothing to do.

Why Furries Make Excellent Hackers
7 Reasons Why You Should Hire A Femal…
An Officer and a Spy
“The Friend Who May Not Seem a Friend…
Tellaman – Whipped ft. Nasty C & Shek…

It’s unfortunate that the fact that Justice League is just marking time isn’t better hidden. “The Rule” writer Simon Spurrier offers a legitimately complex metaphor for imperialism and nation-building and what happens when one is a better warrior than governor. But he does so at cost of the League coming off buffoonish at best, far out of character (or, charitably, Spurrier is writing the cartoon Justice League Unlimited under the guise of Justice League). Jeff Loveness' Black Mercy story is better than expected given the glut of Black Mercy and similar stories over the years, though it still can’t totally escape that we’ve seen this all before.

Maybe a book like Galaxy of Terrors just isn’t meant for me. If this were your first Justice League comic — if you were indeed coming to this book straight from Justice League Unlimited, or if you’d never read a Black Mercy story before — then maybe this collection of suitably complicated, intergalactic Justice League stories would land just perfectly. But the completist in me wishes DC would be willing to just suspend titles like Justice League when one major creative team leaves until the next one can begin, rather than my feeling the pull to buy a book that’s subpar essentially by design. Equally I can’t help but feel that adding the mischaracterization of some of these characters to the overall canon just increases the chances of another writer making the same mistake, namely that Spurrier very enthusiastically writes this book’s Flash Barry Allen as if he’s Justice League Unlimited’s Wally West.

Again, under other circumstances there’s much to like in Galaxy’s first story, Spurrier’s three-part “The Rule” (including Justice League’s extra-sized 50th issue). The League overthrows a dictator on an alien world, but rampant conflict and prejudice leave no one on the planet to justly rule. The Leaguers are not by definition diplomats nor governors, nor do they have the time, training, or inclination to solve an alien civilization’s strife or convince them of the merits of representative government. To that end, Spurrier does well pitting the League against a foe not easily beaten and something they can’t just punch into submission.

Further, Spurrier succeeds in filling the three issues with twists — another enemy alien faction, the mysterious roots of the Trotha’s two warring cults, and forces working in secret against the League. Spurrier also conjures some fine science-fiction, not only many of the Trotha’s “alien” (to us) customs, but also the Vermidiim civilization with “alien” concepts of time. It’s a big space adventure wrapped around a multi-layered mystery, and often enough that’s a recipe for success.

But to a seasoned reader, trouble’s clear no less than five pages in. Green Lantern John Stewart is whining to the point of annoying Superman, Flash Barry Allen is cracking wise about “Bat-barfbags” on Batman’s space ship, and Wonder Woman shows up her teammates with a peaceful solution to the initial problem while the others “were figuring out what to punch.” And that’s a microcosm for the whole rest of the story — Diana cautions for disengagement and restraint, her teammates rather callously dismiss her (with sniping and bickering from both sides) and forge ahead, often (and gleefully) thinking with their fists. In a number of instances, the Leaguers commit some ridiculous cultural faux pas because they haven’t taken the time to get to know the Trotha, as Wonder Woman is quick to remind them.

I may be expecting too much of a guest writer penning a one-off story on a title. But Spurrier’s Leaguers are just so far from what we’re used to that I’m surprised no one raised a flag. In his own title Superman’s helping the United Planets get off the ground, but here he barrels into conflict while ignoring the advice of one of his best friends. John Stewart, peace-loving architect or war-weary soldier depending on your continuity, fires off a gun construct while cheering about letting off steam (letting alone that the easy solution to all this, that Spurrier can’t use, would be to call in the Green Lantern Corps). And again, Barry is written as Unlimited’s wise-cracking Wally, a problem League-writer Scott Snyder had too, such that DC ought just put Wally in the League instead of Barry so this mistake can stop being made.

I did appreciate that Loveness' “The Garden of Mercy” follows straight from “The Rule,” such that this does feel like one whole book even with two writers. But again, stories about Batman fighting his way out of an idyllic alt-life hallucination, Black Mercy or otherwise, are really common, and up until the very last pages I didn’t think Loveness showed me anything I hadn’t seen before. It is a nice bit at the end that Loveness ties Batman’s hallucination here back to Superman’s hallucination in Alan Moore’s “For the Man Who Has Everything,” birthplace of the Black Mercy — but then again, “Everything” is an obvious go-to for a Black Mercy story, too. Robson Rocha draws some nicely gory Mercy-ified Leaguers and Aaron Lopresti’s work is clean on “The Rule” as well.

Between Robert Venditti’s work on Justice League Vol. 6: Vengeance Is Thine and Simon Spurrier and Jeff Loveness' Justice League Vol. 7: Galaxy of Terrors, Justice League has spent 12 issues spinning its wheels for better or worse between Scott Snyder’s departure and Endless Winter, Dark Nights: Death Metal, and the arrival of new writer Brian Michael Bendis. I’m put in mind of when the Super-titles went on a three-month hiatus following “Death of Superman,” with specials and such published instead. Probably it’s unreasonable to expect DC to cancel/postpone Justice League for an entire year, I grant. But then again? We need a solution in these types of situations that’s better than this.

This post first appeared on Collected Editions | Blog, Collected Comics Review, please read the originial post: here
People also like
Why Furries Make Excellent Hackers
7 Reasons Why You Should Hire A Female Divorce Attorney
An Officer and a Spy
“The Friend Who May Not Seem a Friend”: The Cat and the Fire, Part 1 of 3
Tellaman – Whipped ft. Nasty C & Shekhinah
Early preps, good comms key factors in LGUs’ disaster resilience
The Punisher: A Timeless Character
The Best Books For Kids About Racism For All ages
Antiracism Resources for White Teachers & Parents
Opportunity: NASA Rover Completes Mars Mission
Best Manual Coffee Grinders to Boost Your Coffee’s Taste