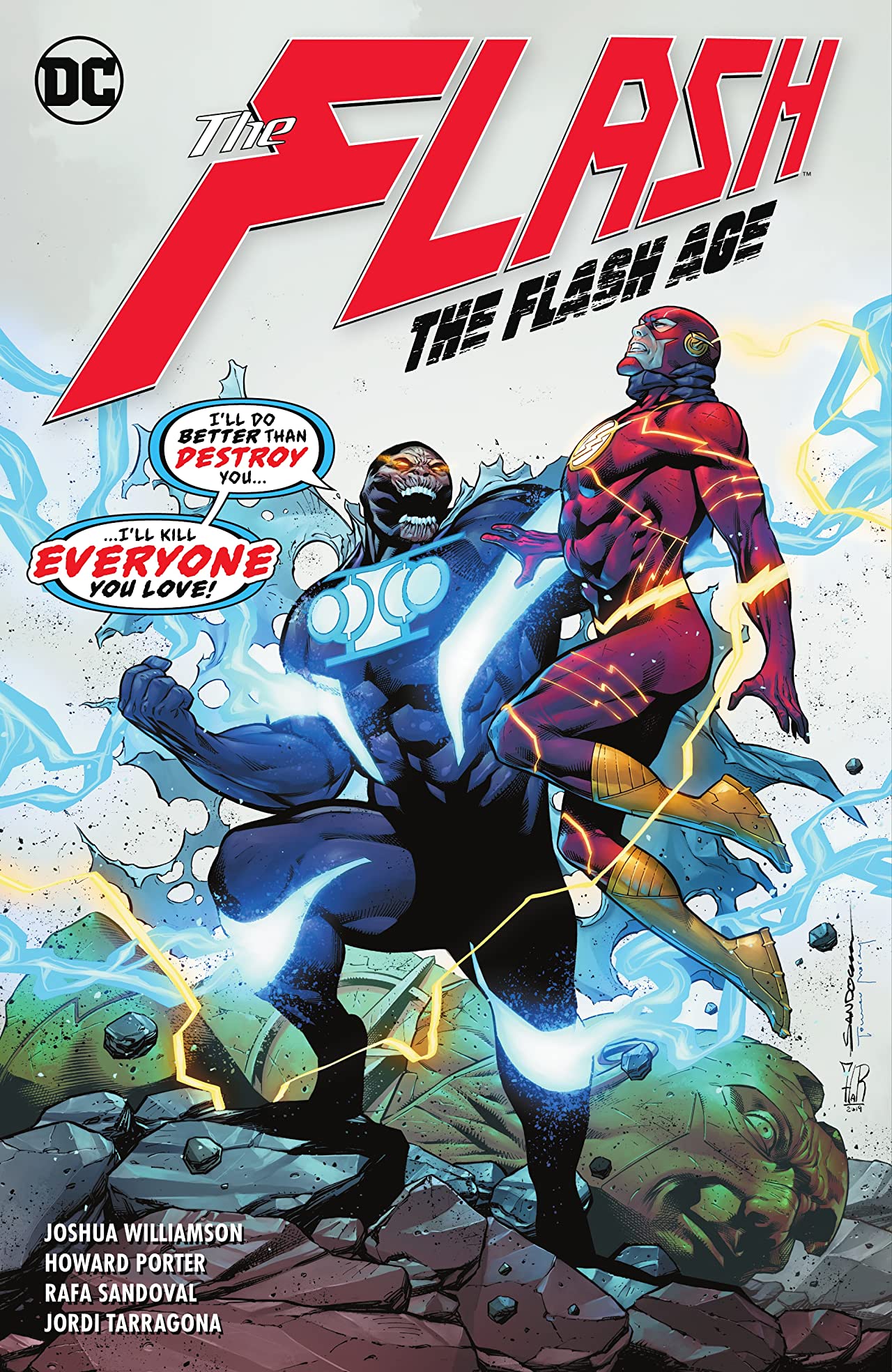 I admire very much that before all is said and done, Joshua Williamson will surely have written at least 100 Flash issues, and clearly there is effort going in to new villains and additions to the Flash mythos. The amount of material Williamson has come up with that’s almost immediately made its way over to the CW television show (from Bloodwork to Godspeed to the new forces) itself tells the tale.

Yet, even the auspicious promise of a villain called Paradox who can wage multiversal war on the Flash ends up unfortunately humdrum in Flash Vol. 14: The Flash Age. What any reasonable person would take the premise to mean is that since Paradox knows all about Barry Allen’s forgotten history, then some of that, 14 volumes down and one until the end, would finally come into play this time around. But it largely does not, nor does defeating Paradox prompt any startling revelations for the Flash, nor is Paradox even all that distinguished or original as an antagonist.

It’s a lot of to do about nothing, not for the first time, either because Williamson won’t or can’t pull the trigger on what this book has been teasing since the beginning. Maybe in the next volume, though I honestly feel sorry for Williamson having spent all this time on a Barry who’s not himself to only get to write him restored for one last volume, if that.

Problematically, from the outset, Paradox resembles in motivations plenty of the Flash’s other villains. An accident (by way, apparently, of touching a computer monitor at the same time Barry Allen got struck with lightning) caused a scientist to become unstuck from time, for which he blames the Flash (like Zoom Hunter Zolomon, like Reverse Flash Eobard Thawne, like so many Flash villains who blame the Flash for their problems). Paradox’s plans and intentions vary from there as the story needs; sometimes he’s desperate to prove the Flash is a villain (somehow), sometimes he wants to eliminate from time the Flash and anyone who’s ever loved him, sometimes he wants to learn “the secrets of the Multiverse” (though what those are and how they would benefit him is never quite clear).

Paradox’s powers seem to consist of glowing and firing energy beams; it was also never quite clear to me that Paradox had any power over the timestream himself, so much as he needed Flash’s frenemy Godspeed to run all over time for him. In terms of any sort of continuity theatrics, these are relegated to a pretty cool splash page of Paradox tearing up the Flash #123 (“Flash of Two Worlds”) cover, as drawn by Rafa Sandoval, and one teeny image of Crisis on Infinite Earths. For all the talk of the Multiverse, there’s nothing like Tangent Flash Lia Nelson making the scene or Barry remembering he was married to Iris or died in the Crisis, nothing like that. As is often the case, any talk of multiverses, multiple continuities, etc., is mostly just talk, not content.

There’s a particularly weird moment after Paradox talks about Barry’s death in Crisis, when later Barry reiterates it. It does make sense Paradox would know about it, given his apparent multiversal knowledge; it does not make sense that Barry would know about it, given that Crisis didn’t happen in the Rebirth continuity, or at least Barry ought not remember it. That this is so shaky underscores the significant problems that I hope Death Metal cleans up. It’s not that Crisis didn’t happen, since enough of Wally West’s timeline has been restored that I believe it includes his stint as the Flash; however, that knowledge had not been extended to Barry, I didn’t think, who doesn’t remember being married to Iris or who Jesse Quick is, for instance. All of this further sinks a book that’s supposed to be about timelines but can’t keep its own timeline straight.

Charitably, despite Flash Age being billed as Flash vs. Paradox, one could argue that the real story here is the teaming of Flash, his friend-turned-enemy Godspeed, and his admirer-turned-archenemy Reverse-Flash — a good, bad, worse kind of scenario. Among the book’s better moments is when it tries to parse out the many, conflicting deaths of the Reverse-Flash, plus his hero-turn when he originally defeated Paradox in the 25th century. Barry’s much-touted inherent goodness already turned the tide for Godspeed, and here he momentarily seems to reach the Reverse-Flash as well, who chooses to save Paradox’s former self instead of killing him. When the Reverse-Flash then snaps Godspeed’s neck, and reveals he had a hand in turning August Heart into Godspeed, it was truly shocking.

At the same time, using Reverse-Flash means Willamson has to go back to the well once again of Thawne having killed Barry’s mother. Grotesquely, Williamson has Flash waiting outside his childhood home, listening to Thawne kill his mother, so that Barry can then grab up the villain for help against Paradox. It’s a sequence that’s profoundly icky, but also it feels we’ve been here a couple times before, and further Barry should be encountering some versions of himself from other times he’s visited this moment while he’s outside standing around. (Some of us remember a time when Thawne didn’t kill Barry’s mother and the Flash had more, varied reasons for being than this. Barry’s mother’s death is a plot point, not something baked in like the destruction of Krypton, and I’d applaud the writer brave enough to reverse it.)

Flash Vol. 14: The Flash Age includes the Flash Annual #3, which doesn’t quite bring the depth to Tom Taylor’s Suicide Squad that Taylor’s own book does, but still it’s nice to see those characters. I did like Joshua Williamson’s conception of Barry moving almost immediately to assist the Squad, recognizing them not as villains but as unwitting pawns of Amanda Waller et al. Art in every couple of issues of the main story is drawn by Howard Porter, whose work looks as dynamic as ever. Special kudos for a scene by Williamson and Porter where Barry cobbles together armor that makes him look not unlike the Snyder-verse Flash.

I say it every time, but let’s see if Williamson can get this one worked out in the final volume.