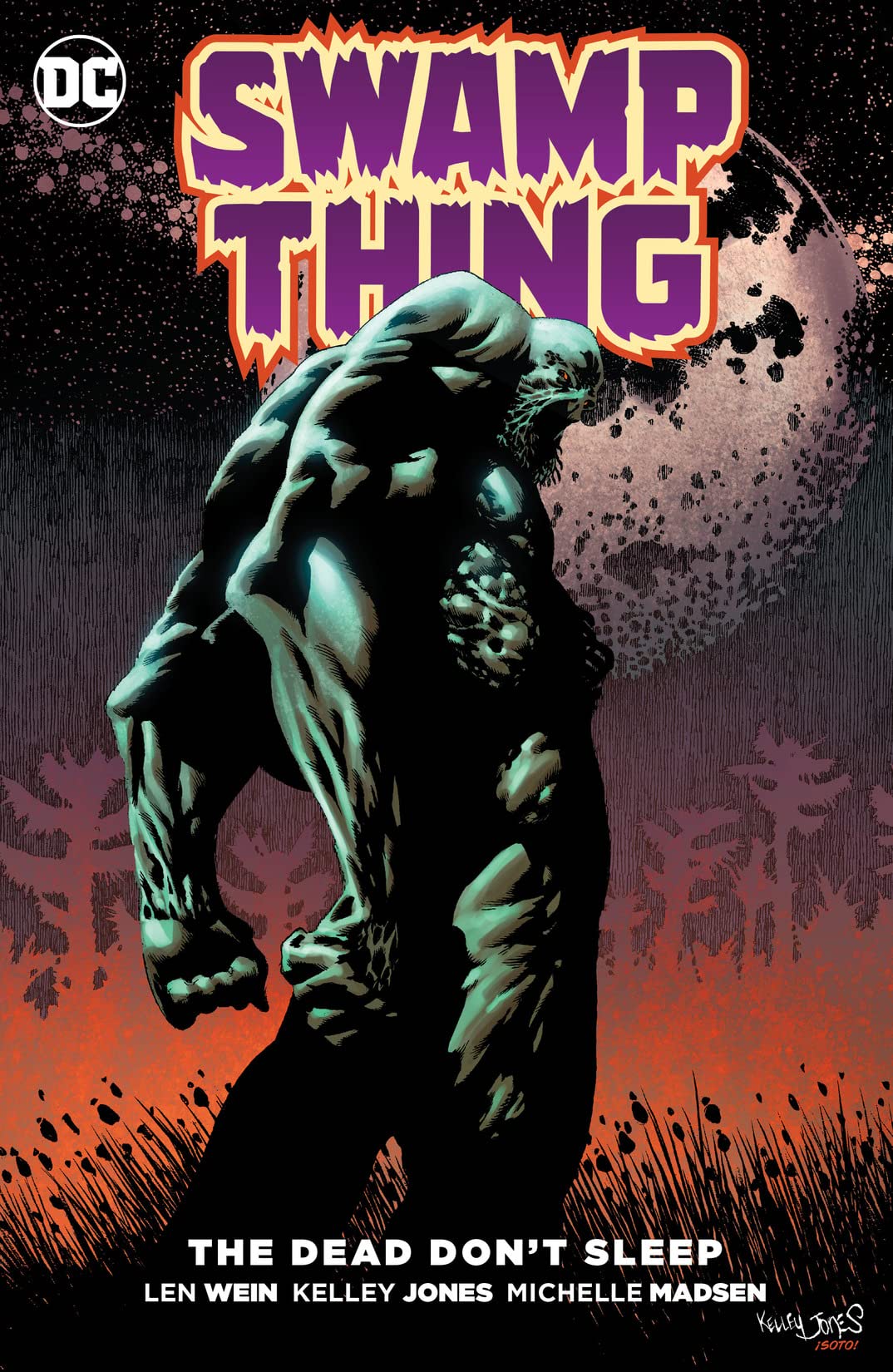 I was looking around the other day for something a little quicker to read, and came upon Swamp Thing co-creator Len Wein and Kelley Jones' miniseries from 2016, Swamp Thing: The Dead Don’t Sleep. Only after I finished reading and sought out a little context did I realize this DC You-era book was essentially an offshoot of Wein and Jones' Convergence: Swamp Thing (collected in Convergence: Crisis Book Two) and meant to lead in to a new Swamp Thing series by the pair before Wein’s death. The book Swamp Thing: Roots of Terror is more specifically billed as containing Wein’s final Swamp Thing story, but Dead Don’t Sleep is pretty close.

I can see in retrospect how Dead follows from Convergence: Swamp Thing, but it’s been a good five years since I read that story and I didn’t find myself lost here. The six-issue miniseries — a two-part story and a four-part story — is just right for a casual Swamp Thing fan, maybe someone who got into Swamp Thing via the streaming TV series. A lot of familiar elements are here, but at its heart this is 140+ pages of a big green muck monster battling his way through a variety of other hulking grotesqueries, all done in Jones' inimitable style. If that sounds like a fun way to spend an afternoon — and it should — this is a book for you.

Of the two stories, I’d venture the initial two-parter is my favorite, in that it truly is an entirely self-contained Swamp Thing horror story — what you might find in an anthology or those ye olde Showcase '90s books, a “Tales of the Crypt” kind of Swamp Thing story. Probably “Swamp Thing vs. a zombie” is enough to sell it, but there’s more — a couple seeks out Swamp Thing because their son’s been zombified, but the truth ends up more complicated. Phantom Stranger and also the Shade cameo here, and that starts off a string of appearances the buoys the book overall — Jones getting to draw Zatanna, Deadman, the Enchantress, the Spectre, Etrigan, and more.

Equally nothing particularly wrong with the second story, which — given a little more space — also doubles down on the horror, with spilled entrails and various torturous situations. At first it seemed Wein was taking the Alan Moore route in his interpretation of Swamp Thing, calling him “a muck-encrusted mockery of a man” (therefore not Alec Holland, but rather the Swamp Thing who once thought he was Alec Holland). Increasingly in this story, however, Swamp Thing is referred to as Holland, until a sequence of events actually sees him reverted back to his human form by way of a magic “paw.” It goes terribly wrong, as these things do, and Alec has to regain and rededicate himself to the form of Swamp Thing. I don’t think we often see the burden of Swamp Thing considered a heroic, noble service, and that was an interesting take on Swamp Thing to end with.

What put me off the second story just slightly — and I say this as something I also found easily surmountable — was the large role played by Matt Cable. My experience with Cable is less with him as a Swamp Thing figure and more as Matthew the Raven from Neil Gaiman’s Sandman, and so I found Cable’s sudden reappearance — and Swamp Thing’s lack of surprise that Cable wasn’t dead and/or avian — somewhat confusing (this is easily enough waved away simply by recognizing Cable as an old friend of Holland’s, in on the secret, who as it is turns out to be possessed by Anton Arcane anyway). Reading up a bit on Cable, I still can’t tell for certain if there’s ever a point where Cable would both know Swamp Thing’s identity but also not be married to Abby Arcane, crazed, or dead (somewhere after Wein’s run perhaps, and pre-Moore). That created a bit of “static” while reading the story, but again, I don’t think it significantly disrupts the experience.

Wein writes from a different time, and so his Swamp Thing is not quite the eco-poet of the more familiar Moore days. Swamp Thing quipping to the zombie, “You can … dish it out … but can you … take it?” strikes me as un-Swamp-Thing-like, though perhaps this reflects Wein’s distinction of Swamp-Thing-as-Alec and not Swamp-Thing-as-Swamp-Thing. Swamp Thing uses a couple curse words, too, including a female-referencing one that, while allowed by DC, seems particularly uncouth coming out of Swamp Thing’s mouth. In a rather nonsensical sequence, a townsperson just happens to have on hand a live grenade to attack Matt-Cable-as-Swamp-Thing with (though Jones get to draw a fantastically sludgy “BAM”); Wein’s Phantom Stranger has an uncharacteristic fit of ego when he shouts at Swamp Thing, “Hey, nobody just walks away from me like that. Just who the hell do you think you are?”

Fairly or not, some elements seem like excesses for Wein, while Jones chews the scenery throughout and it’s wondrous. Jones' Holland Swamp Thing is all lumps and veins, and later his Cable/Arcane Swamp Thing is edges and bone and spine. Everyone is big-armed, big-legged, well-muscled: Jones' Deadman sports a mostly featureless face, two ghostly eyes staring out of a white visage, while his Zatanna floats through two issues partially, and then fully, unclothed. Even the imperfect edges of his panels make a contribution. Obviously in the annals of perfect artist-character pairings, Jones and Swamp Thing is one of them, and six issues of Jones and Swamp Thing is reason enough for Dead Don’t Sleep to exist.

For whatever reason I find myself much more sanguine about “just so” Swamp Thing stories that don’t quite fit anywhere but feature lots of grimy monsters than I do about one-off Dreaming stories — maybe because one-off Dreaming stories represent a deterioration of what was supposed to be a cohesive Sandman Universe, whereas no claims are being made here that this anything more than muck-monster horror. No matter; it’s a great thing that Swamp Thing’s co-creator and DC’s legendary spooky artist could come together to produce Swamp Thing: The Dead Don’t Sleep. It makes me eager to check out some of those other recent Swamp Thing anthology specials DC’s been producing lately.