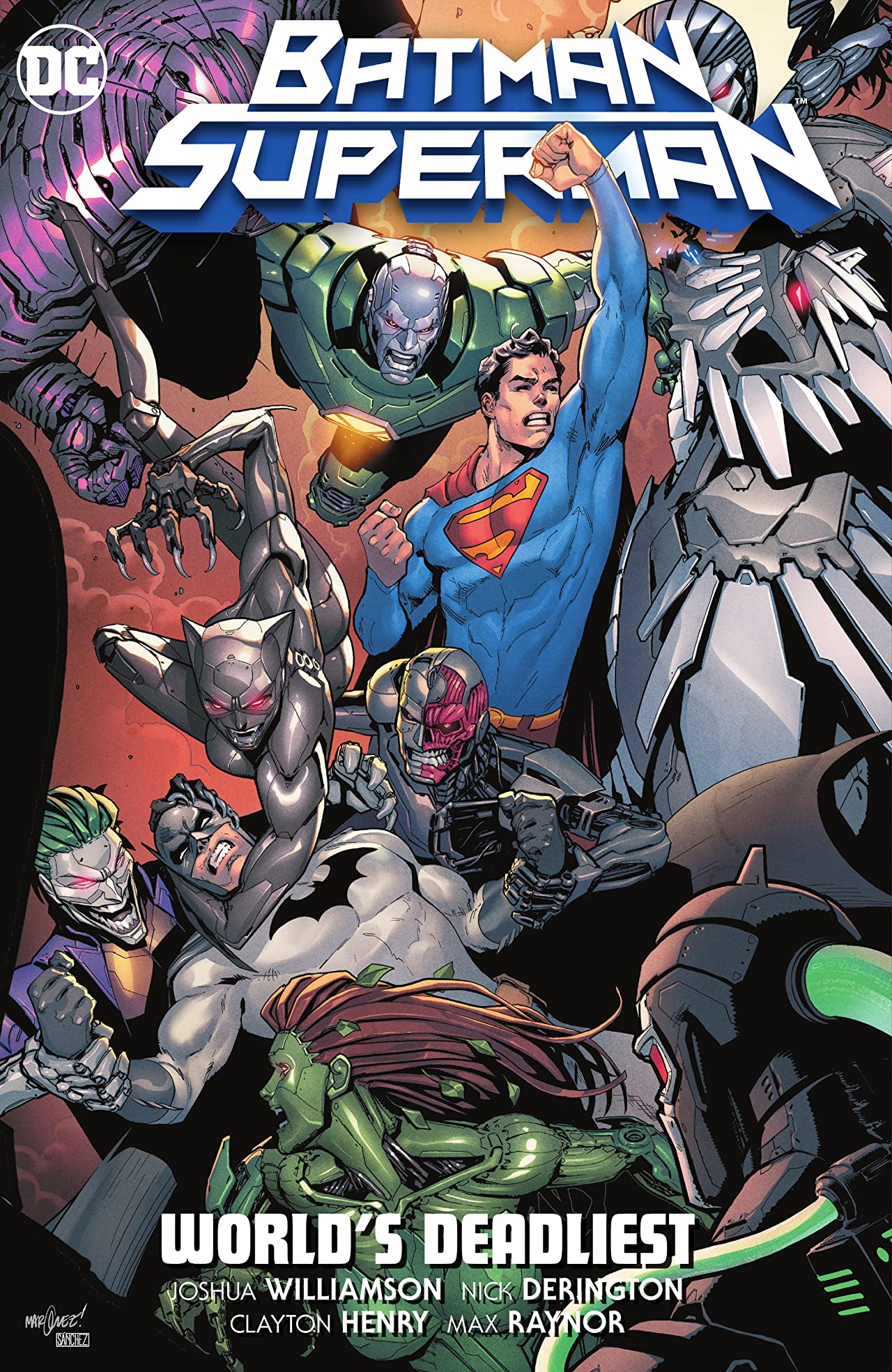 This latest iteration of Batman/Superman outlived its event-based purpose even faster than this title normally does. However, Joshua Williamson’s Batman/Superman Vol. 2: World’s Deadliest is plenty enjoyable, positioned well at the crossroads of the goings-on in various other titles as befits a team-up book. Williamson, with the benefit of a cadre of good artists, finishes off his run strongly before this title is interrupted by the triumvirate of Death Metal, Future State, and Infinite Frontier; what difficulties arise are unfortunate but relatively minor overall.

Top Ten Feats of Small Business Owner…
Why the Riddler is such a good villai…
Superman Mind 2.0
Bulletproof Coffee – How to Make It (…
Kwesi Arthur x Twitch – Superman ft. …

World’s Deadliest is far from “necessary”; it’s unlikely, with the creative team changing and all of continuity moving on, that anything that takes place here will have great effect in the future. This Batman/Superman title was born from the need for a “Year of the Villain” tie-in story, and that could’ve been a six-issue Batman/Superman miniseries without tacking on nine more issues and an annual. Still this title has fared far worse in the past as it’s rooted for purpose.

Between a Kandor-focused story with Zod and Ra’s al Ghul, a mystery regarding the Atomic Skull, and an attack by Brainiac, World’s Deadliest references events in a disparate set of titles including Superman, Batman, Teen Titans, Event Leviathan, and even the early Rebirth Superwoman series (largely not even still in continuity) and Dan DiDio’s recent Metal Men miniseries. Far from being off-putting, I’ve often thought this is exactly where the Batman/Superman title should be (and Justice League, for that matter), a hub that very intentionally reflects what events are happening elsewhere in the DCU. Further, the esoteric use of books like Superwoman and Metal Men is a joy; it might all be editorially directed, of course, but I like to think it’s an indication of Williamson as a fan of the same books as the reader.

The first story seems like Williamson’s headline one, what with the inspired pairing of Zod and Ra’s al Ghul and also the inevitable resurrection of the Kandorians (I don’t think this is Williamson’s intention, but we see a major event from Brian Michael Bendis' Man of Steel undone just as Bendis leaves the Super-titles). Popular artist Nick Derington is a really “get” that raises the story’s profile significantly. Between Williamson and Derington, “Kandor Compromise” is a slugfest with nicely subtle humor, like Batman and Ra’s awkward Bat-plane ride and Superman blithely waving to them from outside.

“Atomic” is ultimately more a story about Ultra-Humanite and his plans against Superman and Batman than it is about the titular Atomic Skull, though the Skull pervades the edges of the story. Most importantly, the story turns on reconciling a couple of things explicit and implicit, including the Skull’s hero turn in Superwoman versus his later imprisonment as a villain in more recent Teen Titans issues. I’ve had a soft spot for the Skull since Louise Simonson and Jon Bogdanove’s landscape-orientation Superman: The Man of Steel movie serial-themed issue, and while that iteration of the Skull is all but forgotten, it was nice to see his character get some consistency work here (again, the kind of thing a title like Batman/Superman can do well). Further, Superwoman was tossed around enough by competing story interests that it well deserves a shout-out.

“Planet Brainiac” is really nicely drawn by Max Raynor, who makes Williamson’s conception of the World’s Finest’s villains-turned-robots a joy to look at. Williamson’s got a fantastic idea, not only the robot planet but also teaming up super-allies Steel and Batwoman (and not even Natasha Irons, as might have been the instinct, but the original John Henry). Williamson even works in the requisite Composite Superman-Batman appearance (and thus he can leave his Batman/Superman run complete). It’s unfortunate that the book’s own preview says “The Brainiac Files Return,” a reference to a particular plot point from Justice League: No Justice that doesn’t actually pan out, as I had some expectations unfulfilled, but what’s actually here was mostly good enough.

I did feel “Planet Brainiac” struggled particularly in regard to Williamson’s writing of Batwoman and Steel, characters presumably he might not be as familiar with. Right at the beginning, he has Batwoman needing to tell genius scientist Steel that the video they’re watching is a recording, a particularly clunky way of conveying that information to the reader. Batwoman later spouts that she’s “not a fan of being drafted or following orders blindly,” which — given Kate Kane’s distinction of being a vigilante only because she was denied the opportunity to be a soldier — is a significant misreading of the character. Williamson could perhaps be forgiven for not knowing this adventure is far from Kate’s first time in space, but his suggestion that whenever a Robin would be frustrated with Batman, he would “try to talk to them one-on-one” implies a level of emotional maturity that Batman is rarely shown with.

The book finishes off with an annual and the series' final issue before Future State, in that order. Sandwiching the annual between issues #14–15 seems a little awkward, and I wonder if it was really just the “Next … Future State!” blurb (that could surely have been edited out of #15) that set the sequence. The annual sees Mr. Mxyzptlk and Bat-Mite warring over whether Superman or Batman is better, a too-familiar gag at this point; these dystopic shorts of Superman and Batman fighting remind a little of Armageddon 2001 or the “Red Glass Trilogy,” but only in those stories' superiority. Issue #15 is good enough — any time Batman/Superman can work in Swamp Thing is OK with me — though these maudlin “Superman and Batman can always count on one another” stories lose their effectiveness given how many of them there’ve been.

Again, overall nothing particularly wrong with Batman/Superman Vol. 2: World’s Deadliest’s raft of team-up stories, but neither are you missing anything by skipping these. I’d be equally happy for DC to switch over to serial miniseries for this title, maybe go back to a time when Superman and Batman teaming up was more of a thrill, less of an everyday occurrence.