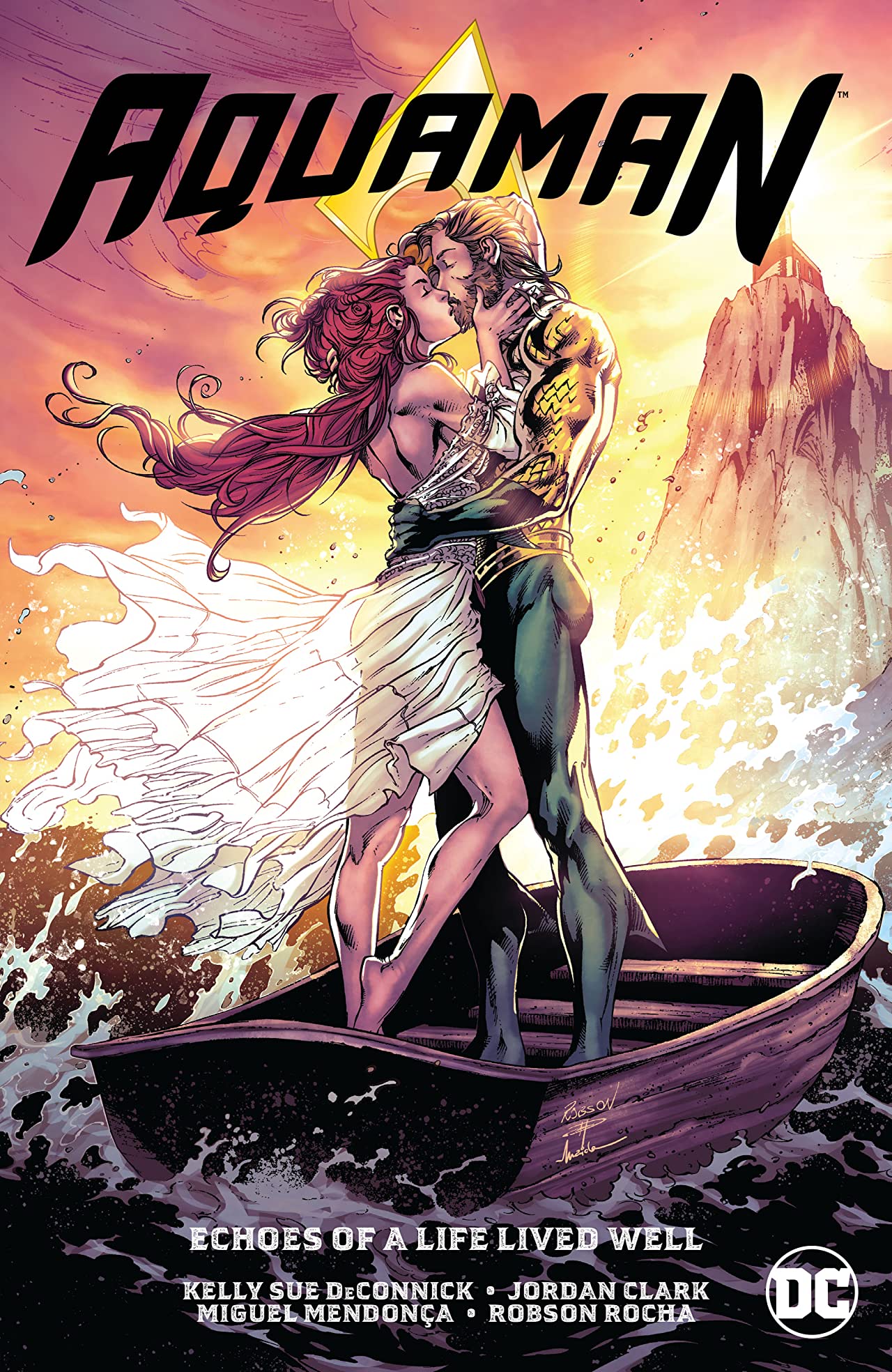 Given Aquaman Vol. 4: Echoes of a Life Lived Well, it’s astounding to think this all started with Spindrift Station, an Atlantean consulate-on-land; Mera as ambassador; and Aquaman suspected of domestic terrorism, and — one left-turn and a movie later — it now ends on civil war in Atlantis, Queen Mera deciding the fate of the Atlantean throne, and a burly, tattooed Aquaman leading a vanguard of gods and heroes to save his home. It is to writer Kelly Sue DeConnick’s credit, following from Dan Abnett before her, that all these disparate elements still manage to feel of a piece.

Thor, the archetype of the epic hero …
Things to do in Marmaris
VIDEO: Elaine – You’re The One
Kwesi Arthur – Zombie
Antique Rug Bazaar Orientalist Painti…

Perhaps unavoidably, since Aquaman only has so many enemies and those enemies only have so many complaints, the conflict here feels repetitive, something the text itself even acknowledges. But as I’ve said before, DeConnick’s conception of Aquaman is just a lot of fun, as is his supporting cast, and that has made this run enjoyable even when they’re doing not much at all. I was not familiar with DeConnick’s work before, but now I’m intrigued, and I’d be happy to see her do something else for DC without as much push-and-pull as it might have seemed Aquaman was facing.

A major DC Rebirth title ends here, nicely and upliftingly, and making some major changes to the title character’s status quo. There’s no new Aquaman title on the horizon (though there is another movie, so let’s just call it a matter of time), but I’ll be interested to see if and how these changes are manifested in the interim, probably as part of Brian Michael Bendis' new Justice League if anywhere.

Arthur and Mera wed in the final issue of DeConnick’s Aquaman, a rare absolute happy ending, though at this point they have been engaged for so long it was almost a forgone conclusion. More important are other items personal and political — the arrival of daughter Andrina “Andy” Curry and the democratization of Atlantis, eschewing the monarchy once and for all. Of these, the latter might even overshadow the birth of a child; for about forever, the intrinsic conflicts of the Aquaman character have been wanting to live his life on his own terms versus serving his duty as the king of Atlantis, negotiating those who did not want him to rule versus those who needed him to, and battling away any number of royal contenders.

We hardly know who Aquaman is, or who Atlantis is, without the monarchy — less responsibility for Arthur? More? Might we see Atlantean President Arthur, or better yet Atlantean President Mera? My very fervent hope is that we don’t simply learn that Atlantis changed its mind off-panel and has returned to a monarchy again. Rather, I’d be curious for a writer to explore the landscape of Atlantis with democratic leadership — we know full well this would not mean an end to drama, up to and especially given that Atlanteans would then be voting for the first time in the entire history of their civilization.

Baby Andy is complicated for other reasons. A couple continuities ago, Arthur had an infant son, killed by Black Manta. I don’t expect DC will go back down that path, ill-conceived as it already might have been, but still the echo hangs in the air, and it seems necessary for some kind of reckoning now that another child is in the picture. And also given Future State previews and etc., we know Andy is sure to develop some kind of superpowers and being comics there must be complications involved. That’s letting alone whether the powers-that-be will be satisfied with a child-full Arthur in the comics if there’s a childless Arthur on the silver screen. So there’s a story rife for telling, or not telling, and I’m curious who eventually will tell it or at least tell their way around it.

Again, Echoes is enjoyable, at times delightful (whose heart doesn’t melt at baby Andy pulling on Arthur’s beard), and DeConnick aside, also with a strong two-parter spotlighting Aqualad Jackson Hyde by Jordan Clark. That said, the plot is often puzzling, including that Arthur and friend Tula make it their mission to halt the politically motivated wedding of Mera and regent Vulko, even as Arthur acknowledges it’s all according to Mera’s explicit plan.

Ocean Master Orm plays a large role, vying for Atlantis' throne again (and the book even points out Orm’s repetitiousness), when we last saw him in the Mera miniseries giving up that kind of life (there’s a Year of the Villain: Ocean Master one-shot that really needed to have been included here). One of Orm’s major undersea underlings is called “Pilot” and apparently that’s his given name, not his job title or anything. At one point Orm’s henchmen attempt to immobilize Aquaman by wrapping him in a large curtain(!), and in general the fight choreography seems to get away from artist Miguel Mendonca by the end. All of this goes toward my feeling through most of this run, that what it lacks in the small details it makes up for in general good-heartedness. (The water gods that DeConnick introduced back in the beginning still get almost nothing to do, and I can’t help wondering what DeConnick’s original vision for this was all that time ago.)

As I said, I hardly think Aquaman Vol. 4: Echoes of a Life Lived Well is the last time Aquaman will headline his own title; I’m sure it’s just a matter of time. However, if I’m not mistaken, the end of this book will mark the first time Aquaman hasn’t had his own ongoing title since Geoff Johns' grand New 52 revitalization of the character. That’s a long, long way — and, let’s not understate, that time includes a movie that owes no small part to that revitalization. Which is to say, Echoes is the end of a big cycle, one that the next one will have to live up to. Kelly Sue DeConnick seals it with a kiss (almost literally).

VIDEO: Elaine – You’re The One