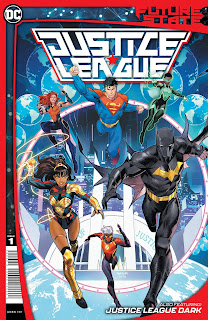 DC Comics' Summer 2021 collections solicitations should be out before the end of the year, but while we wait, we’ve got early news of the collections for DC’s upcoming Future State two-month event.

That Future State is going to be collected is not necessarily a surprise, though we now that the books will arrive from mid-June to early July 2021 and be in paperback. (Though, I wouldn’t discount the possibility of deluxe-size hardcovers or an omnibus later down the road.) All of the various Future State series are accounted for here short of Brandon Thomas and Daniel Sampere’s Future State: Aquaman, but I’m sure it’ll end up somewhere, presumably in the Justice League-themed collection.

But first, the collections of two other notable titles:

In hardcover, coming in June 2021, at 192 pages. That’s more than the Fractured and Shattered specials, but no word on the contents just yet.

• Tales From the Dark Multiverse II

And now the listings:

• Future State: The Next Batman