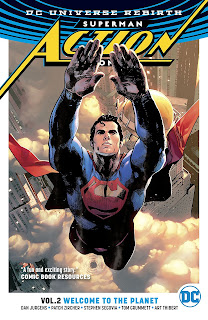 There's hardly a villain in Dan Jurgens's Superman: Action Comics Vol. 2: Welcome to the Planet, and rather it largely involves the alt-continuity Clark and Lois sussing out their new lives and doppelgangers, and digging into some of the central mysteries of the Rebirth title. Through answers are scarce, the process is a lot of fun, and frankly I enjoyed Clark and Lois just knocking around here more than I did last volume's Doomsday re-hash. This is a talky trade, to be sure, and you've got to like that kind of thing, but I enjoyed Jurgens's efforts here to get a bunch of the Super-characters on the same page.

Planet kicks off with Jurgens's Justice League #52, which really deserved its place at the beginning of Jurgens's Action run (it's restored such at the start of the deluxe collection). It explains quite a number of things, not the least how Lex Luthor suddenly came to be owning the Daily Planet; there's also a fair bit the issue establishes ahead of Phil Jimenez's Superwoman debut. Among things Jurgens is doing well in this Action run is continuing to write Geoff Johns's slightly-less-evil New 52 Lex, and the issue presents well Lex's various sides -- not to mention art by Tom Grummett(!).

On the Action Comics side, this book only collects four issues, comparatively short indeed when you figure that's just two months of twice-monthly comics. Those issues are split two and two for Clark and Lois; possibly Jurgens might've benefitted from interspersing these more and making a four-parter. Irrespective, we end up with a lot of Superman questioning the non-super Clark Kent and Lois questioning Superwoman Lana Lang; answers, as I mentioned, are not forthcoming, but there's a fair amount of joy in watching the characters and their alternative selves hash it out on the page.

Superman has it kind of rough in this one, in that the Clark he's questioning is at times belligerent. We take for granted that Clark and Superman are friends because they're the same person or Clark is Matrix or Martian Manhunter. Here, Jurgens has a Clark Kent who ostensibly isn't and has never been Superman, and who's increasingly miffed at Superman mucking about in his life, and that's a dynamic we haven't seen Jurgens write before. I do kind of know what's happening here, though not necessarily why, and I thought that Jurgens gives this Clark a rather detailed back-story was interesting; kudos also to Jurgens for a bunch of post-Crisis name-checking here and throughout the book, including Kenny Braverman and Daily Planet stalwart Allie, and also Superman casually mentioning Saturn Girl given that he does actually know her.

Jurgens's Clark story is good but his Lois story is better, if only for just the sheer bizarreness of alt-Lois trying to walk into the Planet and pass herself off as "their" Lois. I think we all expect at some point we'll be back to the Super-status quo of Lois and Clark, ace reporters, so it's nice to take this first step. Having Superwoman Lana Lang on the Action Comics page is also thrilling; clearly something's going on with all of these versions of everyone running around, and it only further whets my appetite for it to see them all try to figure out the mystery together. In this story as well, Jurgens presents a Lex who defies both Lois and Clark's expectations; I had not been very enthused about the upcoming "Superman and Lex in space" story, preferring this focus on Metropolis, but again Jurgens's conception of the New 52 Lex has grown on me more and more.

Almost some 25 years ago in Superman #59, after Lois Lane found out she was engaged not just to Clark Kent but to Superman, Dan Jurgens had Lois and Clark go up to the Mt. Fuji to discuss their relationship (given a little extra time courtesy of the Linear Men). That's a darling issue, which leaves off panel what the couple discusses in their six-hour conversation. Here, I thought Jurgens did equally well putting a lot of it on the page. It is not the most rock 'em, sock 'em fare, but if we want to talk about a more mature Clark and Lois for the Rebirth era, then a prime example is three pages in one issue with the couple discussing Lois going back to work now that son Jon is older, and then another two pages in the next issue of Clark explaining the same to Jon. Jurgens offers it all realistically, without schmaltz; though Jon and the Kent family is not entirely Jurgens's purview, I thought he demonstrated here that he could handle it the same as Superman's Peter Tomasi can.


In a manner a bit like the Triangle Titles, I'd like to think, Dan Jurgens's Rebirth Superman: Action Comics Vol. 2: Welcome to the Planet focuses on the "human" element of these characters, and it's more successful in my opinion than the first volume. At some point Jurgens will have to get past all of this dual identity and alternate version stuff, even the Rebirth shenanigans, and get down to telling plain old Superman stories. I'm eager for that, even impatient, but to me this volume was a good indication that Jurgens will be able to do the quieter, detailed character stuff that was a hallmark of his former work in this franchise.