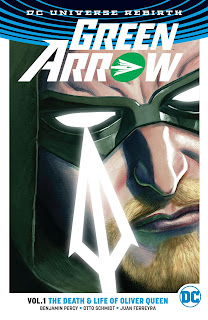 Benjamin Percy's first Rebirth volume, Green Arrow: The Death and Life of Oliver Queen, starts out with a lot of promise, and it's promise that carries through the book's early issues. It is not promise that carries through the whole time, however, and my concerns are equal parts that some of this I feel we've seen before and also that it all becomes more fanciful than I like my Green Arrow stories. That doesn't dampen my enthusiasm necessarily, however, because I like the dynamic Percy has set up among the cast and the end of this volume has an interesting hook, and that plus the promise of more of Otto Schmidt's art is likely to bring me back again.

Death and Life's early chapters build well on Percy and Schmidt's Green Arrow: Rebirth special, which also appeared at the end of the Green Arrow Vol. 9: Outbreak collection. First, Percy writes a crackshot Green Arrow and Black Canary pairing, which crackles on the page in the first issue when Canary sees Arrow bribing the police to help him and later calls him to task for his company's bad dealings. Second, that first issue is genuinely surprising, between Arrow Oliver Queen's "serial bribery" and the shocking betrayals of both Shado and Oliver's half-sister Emiko at the end of the issue. Otto Schmidt's art looks like nothing else DC Comics is publishing right now, cartoony and detailed and smart, and all in all it makes for riveting reading.

I have seen before that the right artist can make or break Benjamin Percy's storytelling. Namely, Percy's Green Arrow Vol. 8: The Night Birds was a chilling techno-horror story with Patrick Zircher, but the pseudo-werewolves under Syzmon Kudranski came off overwrought. In this book, artist Juan Ferreyra is unmistakably a good fill-in for Schmidt in the final chapters, but he is not totally the same, and without Schmidt it's more apparent where Percy's script drags. Young Oliver Queen ages up considerably under Ferreyra -- consider Oliver standing next to John Diggle with exactly the same height and body type -- though Ferreyra does draw a gorgeous splash page of Oliver and Diggle facing off across a bridge.

One of Death and Life's difficulties is that this is at least the second time (if not more) that we've seen Oliver Queen stripped of his fortune and sent on the run, the most recent of which being Jeff Lemire's stories that almost immediately preceded Percy's. That's not the only familiar element, including Queen Industries funding covert or illicit activities (this'll be the second time), Oliver's CFO/mentor having a double life (he really needs to hire better help), and so on. I guess in leading the Rebirth charge Percy gets to set things how he wants, but the repetition was strange -- as was the introduction of brand-new long-time-friend Broderick -- especially since Percy certainly acknowledges and preserves Lemire's run with the use of Diggle, Emiko, Shado, and so on.

Additionally, what I liked about Percy's Rebirth special, specifically after Outbreak's pseudo-werewolf story, was that despite supernatural undertones, it really involved Green Arrow protecting Seattle's homeless population from victimization by the rich. That kind of urban realism of the Mike Grell variety carries through the first chapters, from Shado and Emiko attacking Oliver in his apartment to his attempt to recover his arrow-arsenal. But whereas Percy and Ferreyra's zombified "Burned" bad guys are horrifying -- especially the sequence of the "burning" process -- the giant floating fortress is a bit over the top, when I'd rather see us back on the streets of Seattle.

Lemire introduced Emiko but it was really Percy who established her as living with Oliver as his sister/sidekick. I guess there's precedent for this kind of relationship going back to Kevin Smith and Judd Winick, and Oliver's second Speedy sidekick, Mia Darden (inspiration of sorts for Thea Darden Queen on the TV show). But, I'm not quite sure Percy's done enough for my tastes to explain what motivation Oliver has to want to be such a doting big brother, especially to a sister that until recently he didn't know he had. Emiko's sort-of-betrayal here, and also Percy's making Shado an antagonist, are both interesting moves that I'm curious to see play out, but Emiko is an aspect of the story that doesn't quite seem to me to fit.

Percy's conception of Black Canary Dinah Lance also bears watching. Clearly there's a cheesecake element to Otto Schmidt's art, and so Canary's halter top and hot pants carry with them more contextually-appropriate sexuality in a 1940s/Darwyn Cooke kind of way than if Ed Benes were drawing the same. But the end of Percy's story turns a bit on Dinah chiding Oliver for not reaching out to her after his presumed death, after they'd broken up; as Dinah says, "I push people away ... it's up to you to not let me go." That's well and good within the story, but essentially Percy suggests Oliver is not supposed to accept a woman's request for him to leave her alone and to pursue her anyway. Arrow and Canary have a problematic relationship in the comics, no less than the occasions Canary hit Arrow in the Green Arrow/Black Canary era that in the reverse might be considered abuse. It doesn't appear Percy's got it all figured out yet and I'll be curious to see how this evolves in subsequent volumes.

Still and all, Benjamin Percy's Green Arrow: The Death and Life of Oliver Queen has an exciting ending with explosions all around, and then Percy deposits Oliver Queen on an island, always a can't-miss scenario. When Percy's Green Arrow works, it works really well, and again, Otto Schmidt looks like nothing else that DC Comics's got. All of that makes me a shoe-in to keep following Oliver Queen's Rebirth adventures for the time being.

[Includes original and variant covers, sketches and layouts by Schmidt and Ferreyra]