What to wear with a fisherman sweater

I went to Ireland for the first time three years ago, and if you've never been, I highly recommend it. It's a gorgeous country, the food was surprisingly good, the beer was even better, and the people were the kindest I've ever met on vacation. But of all the things that pleasantly surprised me on that trip, I was perhaps most blown away by the sweaters. Which makes sense, because there are sheep literally everywhere in Ireland—you've got to do something with all that wool, so why knot knit a Sweater or several thousand? Ireland introduced Aran sweaters to the world—the cable-knit patterns are meant to evoke fishermen's ropes, hence why they're also known as fisherman sweaters—and Grace Kelly really put them on the map by famously wearing one on the cover of Vogue. Like most things associated with Princess Grace, a fisherman sweater is a classic that never goes out of style, but they seem to be especially trending this season, possibly because of their extra coziness and comfort in these up-and-down times. And while I've featured an Aran knit here before (way back in 2018), this time it's the real deal, straight from Ireland. Here's how I'm styling my fisherman sweater. 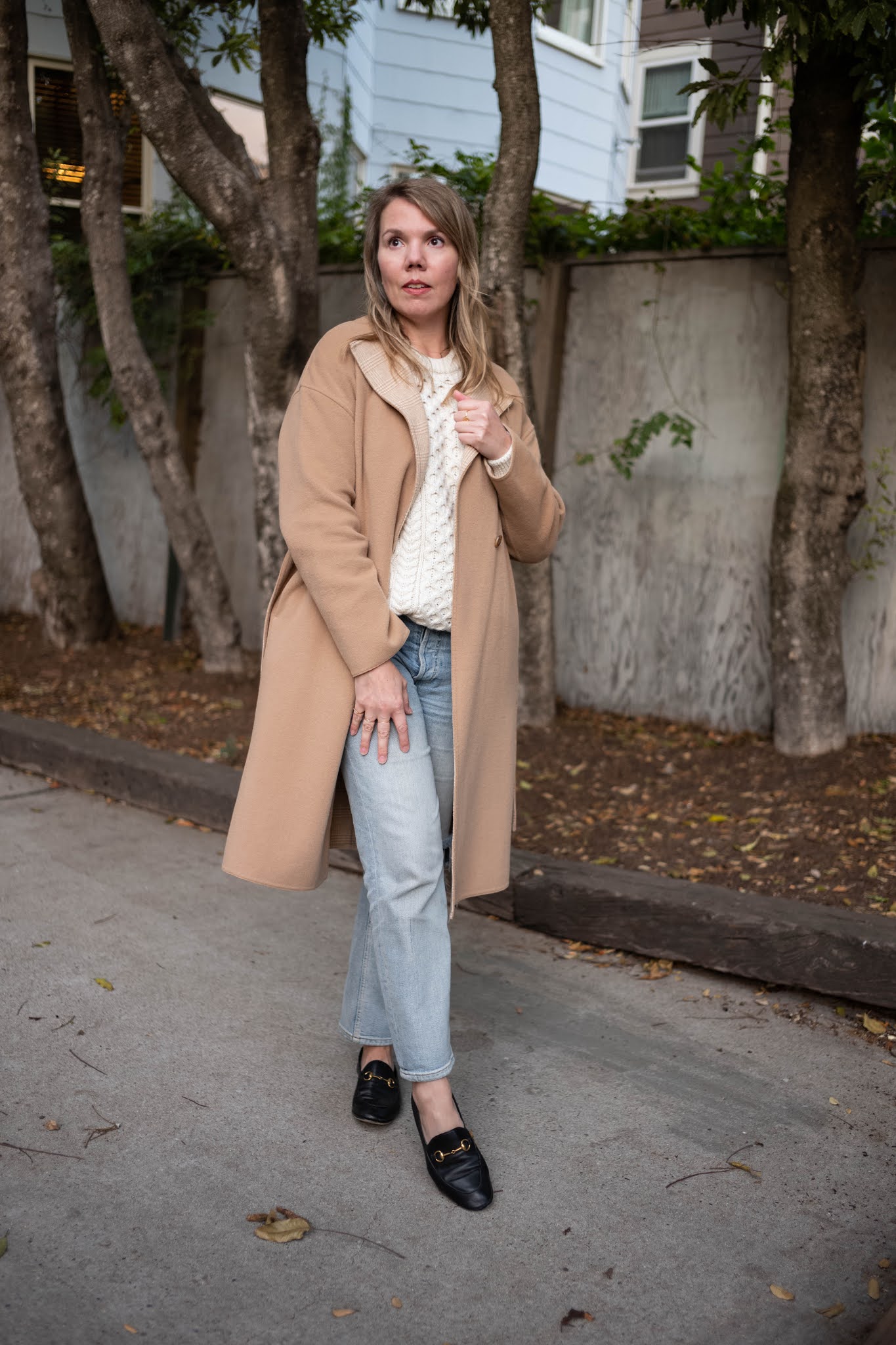 If you ask me, a good fisherman sweater should be warm and thick enough that you can layer a turtleneck or thermal underneath and be virtually untouchable against the cold. This is that sweater—it's made of Donegal merino wool and wearing it makes me feel invincible. The yarn feels a little raw; it's not scratchy, but it's not super soft either, and that's a good thing, because that means it's going to last and not pill. The quality is incredible, especially considering it was made in Ireland; a designer version of a sweater like this would be hundreds of dollars more. I feel like I've discovered a little secret! I went up a size to a medium because I wanted a more oversized fit, but that was probably an error on my side, as it's a bit big in the arms and long (I'm hoping I can reshape it a bit when I wash it). But in spite of being so thick and slightly large, the sweater can still easily fit under my favorite Camel Coat, or with whatever else I decide to wear with it. 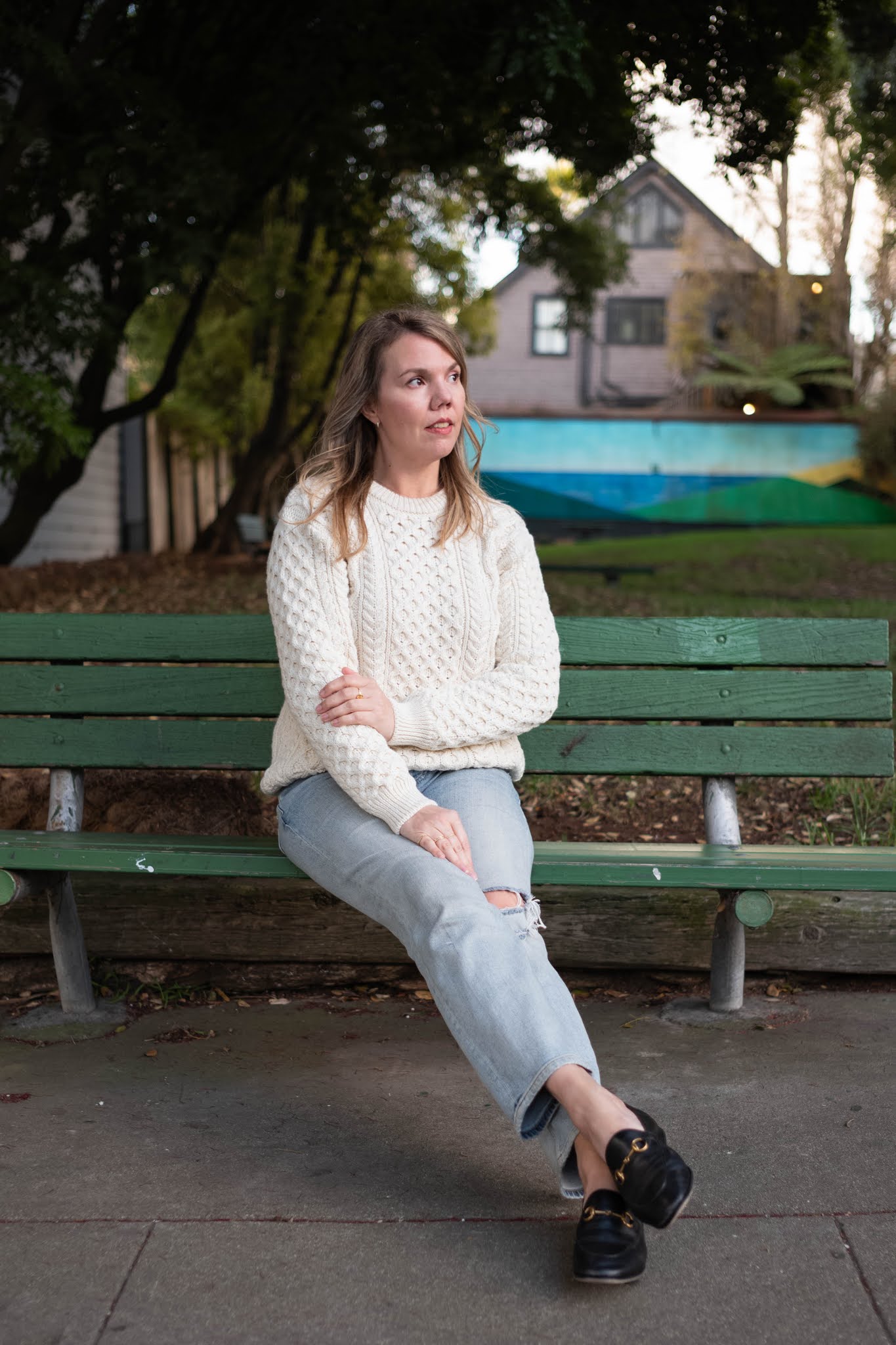 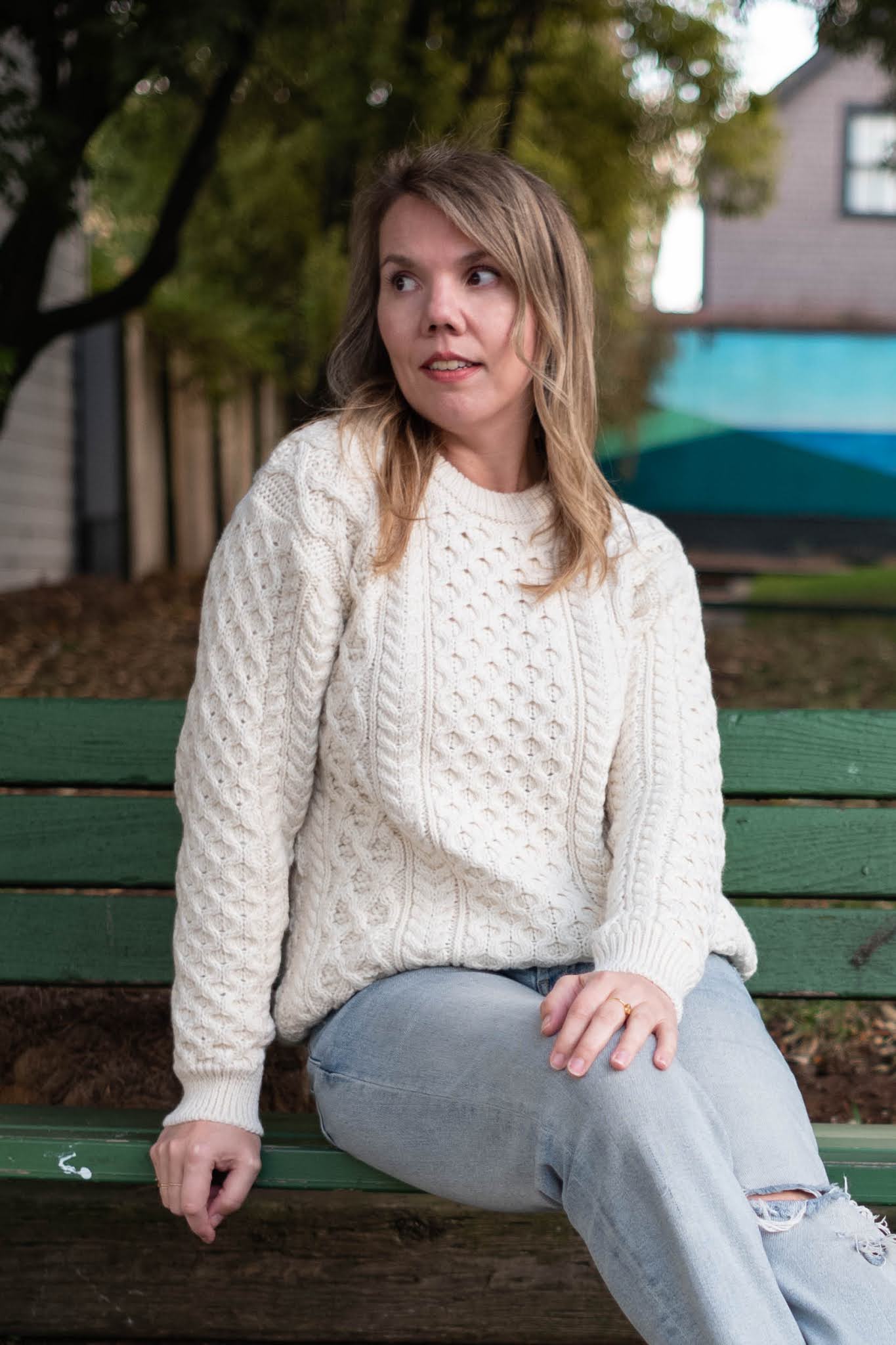 Keeping in the classic theme of this look, and considering the unseasonably cold weather we've been having, I went with my favorite camel coat, which you last saw with a sweater tunic in February. I love this coat because it feels like a bathrobe, and in spite of the fact that it was under $100 at Uniqlo, it looks far more expensive and draws a ton of compliments (most recently from a random guy at Target). No matter how much you spend, you can't go wrong with a camel coat; this one is from several years ago, but I've linked Uniqlo's current version below. 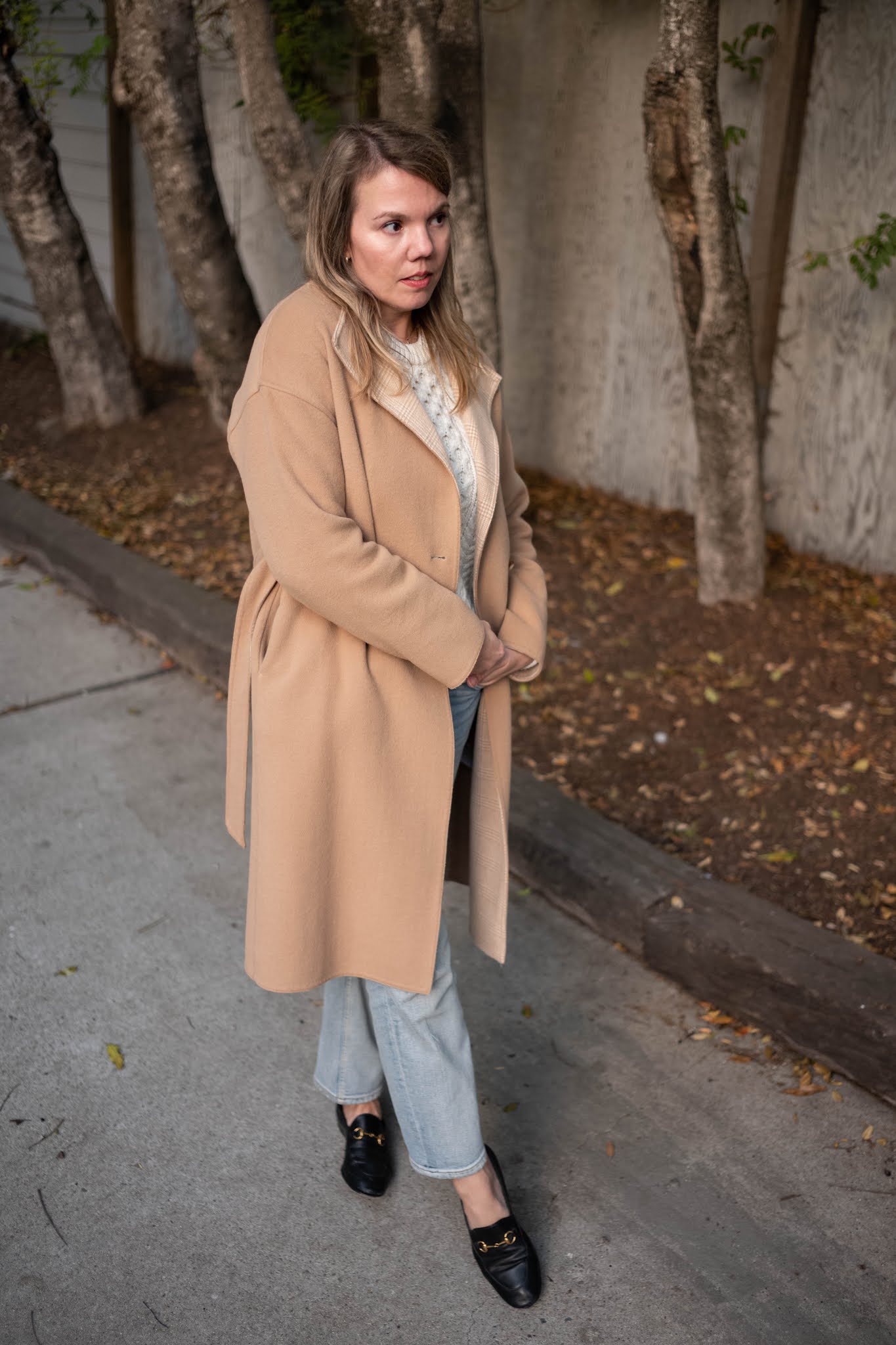 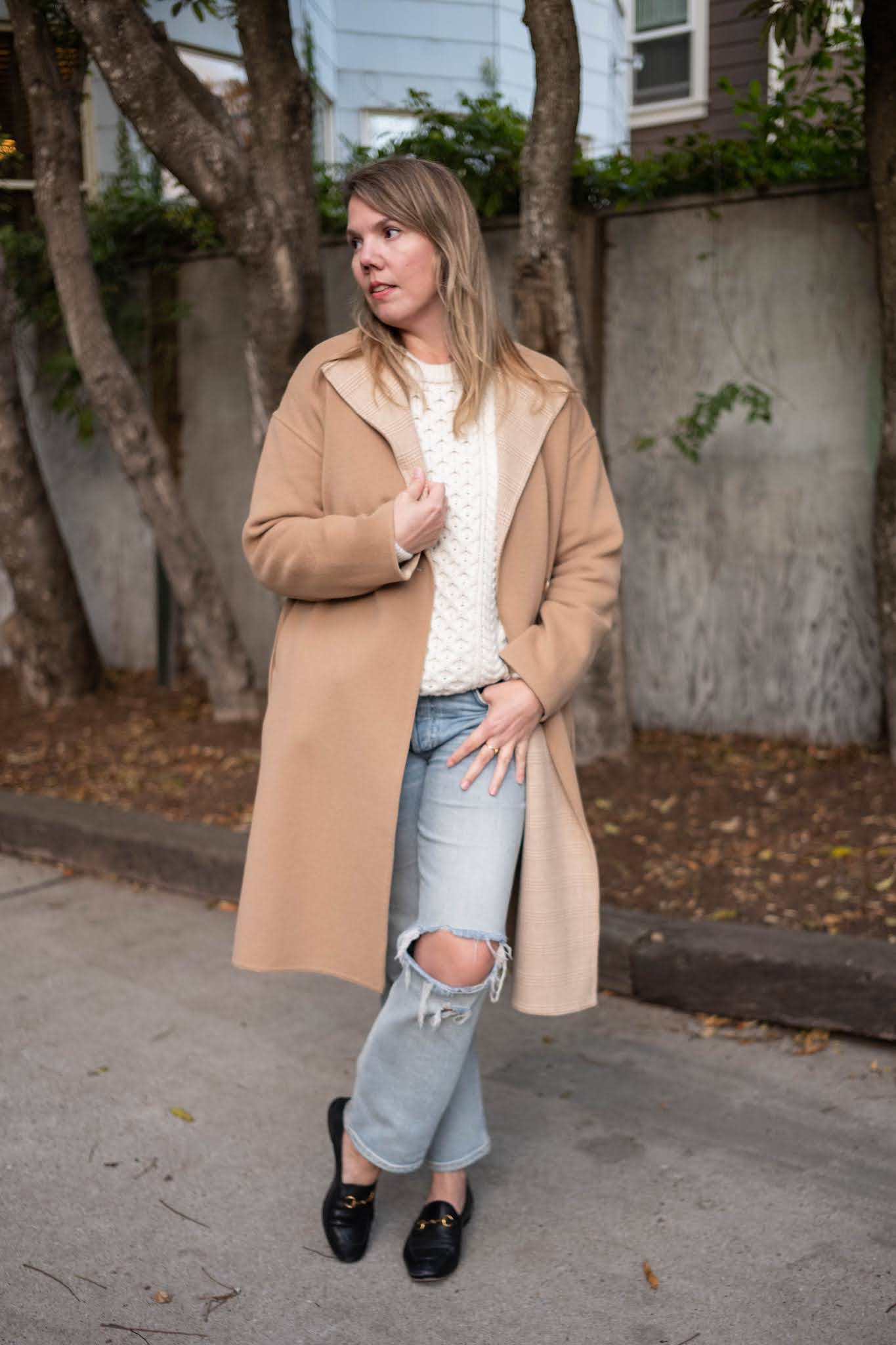 As I mentioned the last time I wore these jeans, Sean hates them, but I don't care because they're so ridiculously soft and comfortable. That said, I kind of understand his point now that I've seen these photos; the leg is kind of blocky, so paired with an oversized sweater and generously cut coat, I kind of look like a big blob. I've been contemplating cutting a few inches off the hem of this pair, with the idea that a shorter, ankle-exposing inseam with give my legs a bit more shape. They were not cheap, however, and I don't want to ruin them, so for now, they might just be my indoor jeans. 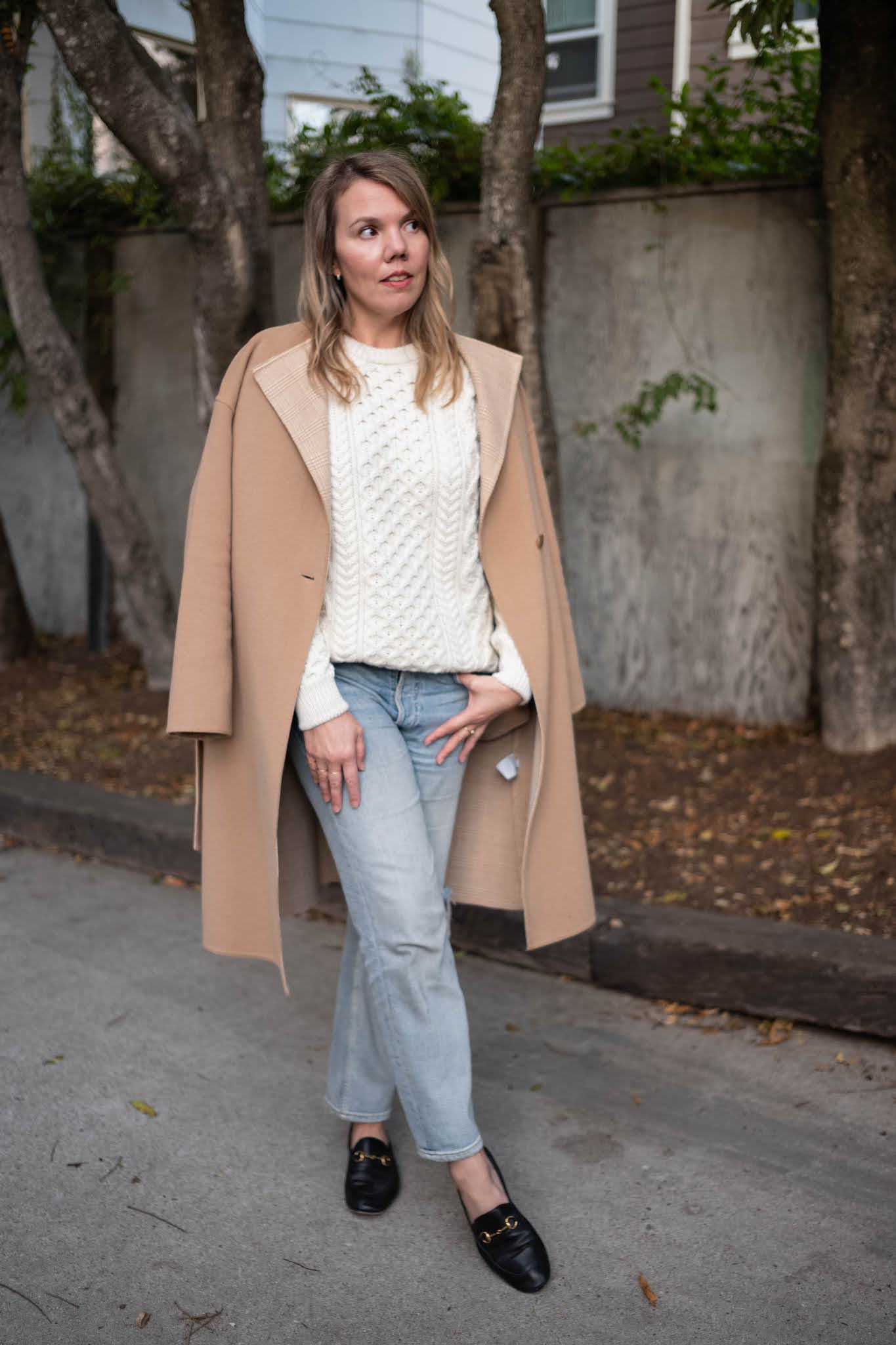 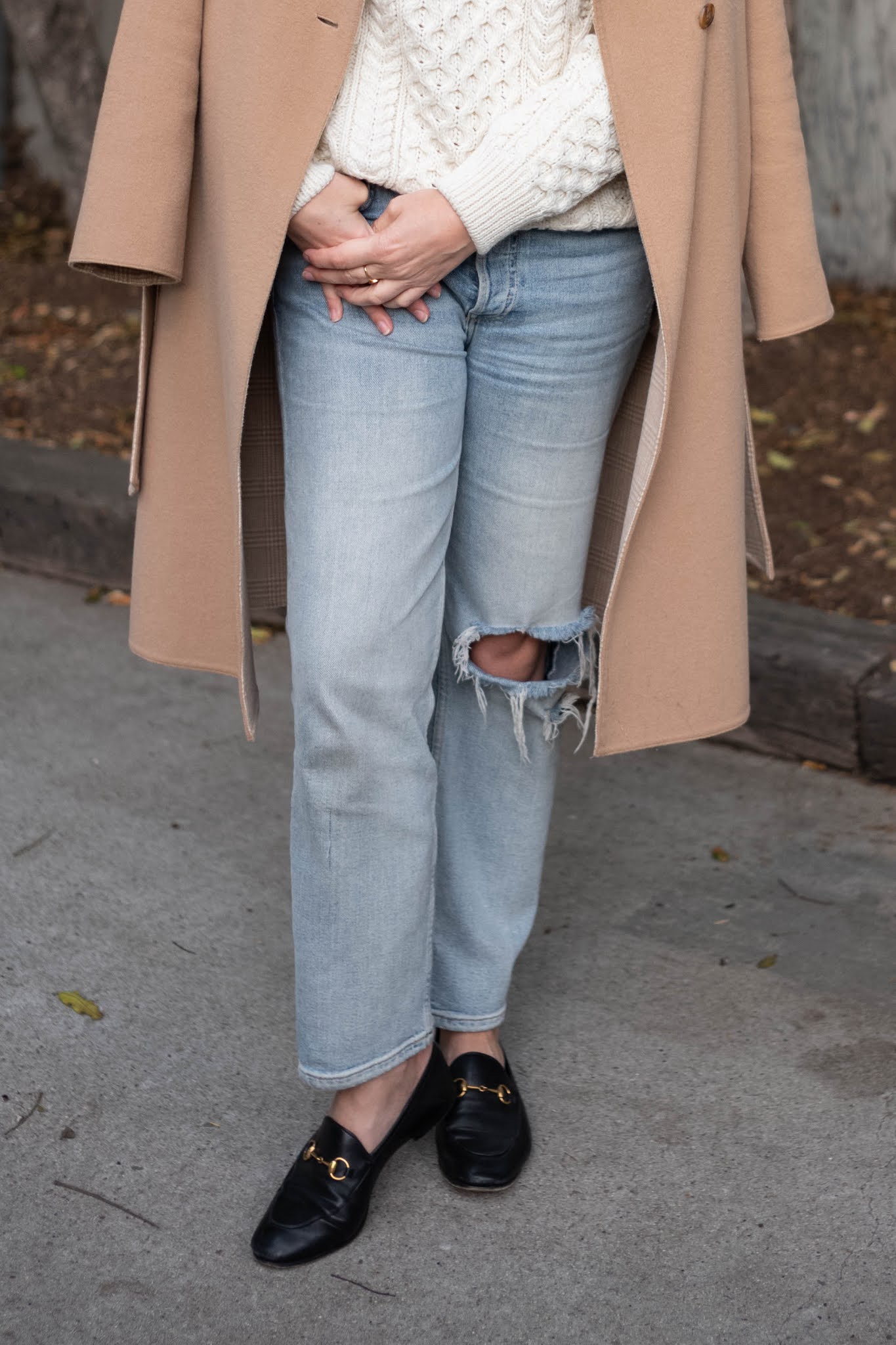 I will, however, be proudly seen in my Gucci Brixton loafers, which are also incredibly comfortable but classy and polished too. I feel like a fancy lady whenever I wear these (you last saw them with paperbag pants), and more importantly, my feet are super happy. As I've noted before, this style runs super big—I'm in a 38, which is a half size smaller than what I typically wear in Gucci shoes and a full size smaller than what I wear in most European shoes. If these are on your holiday wish list, I hope you get a pair, because they're an incredibly good investment and will forever be a classic. 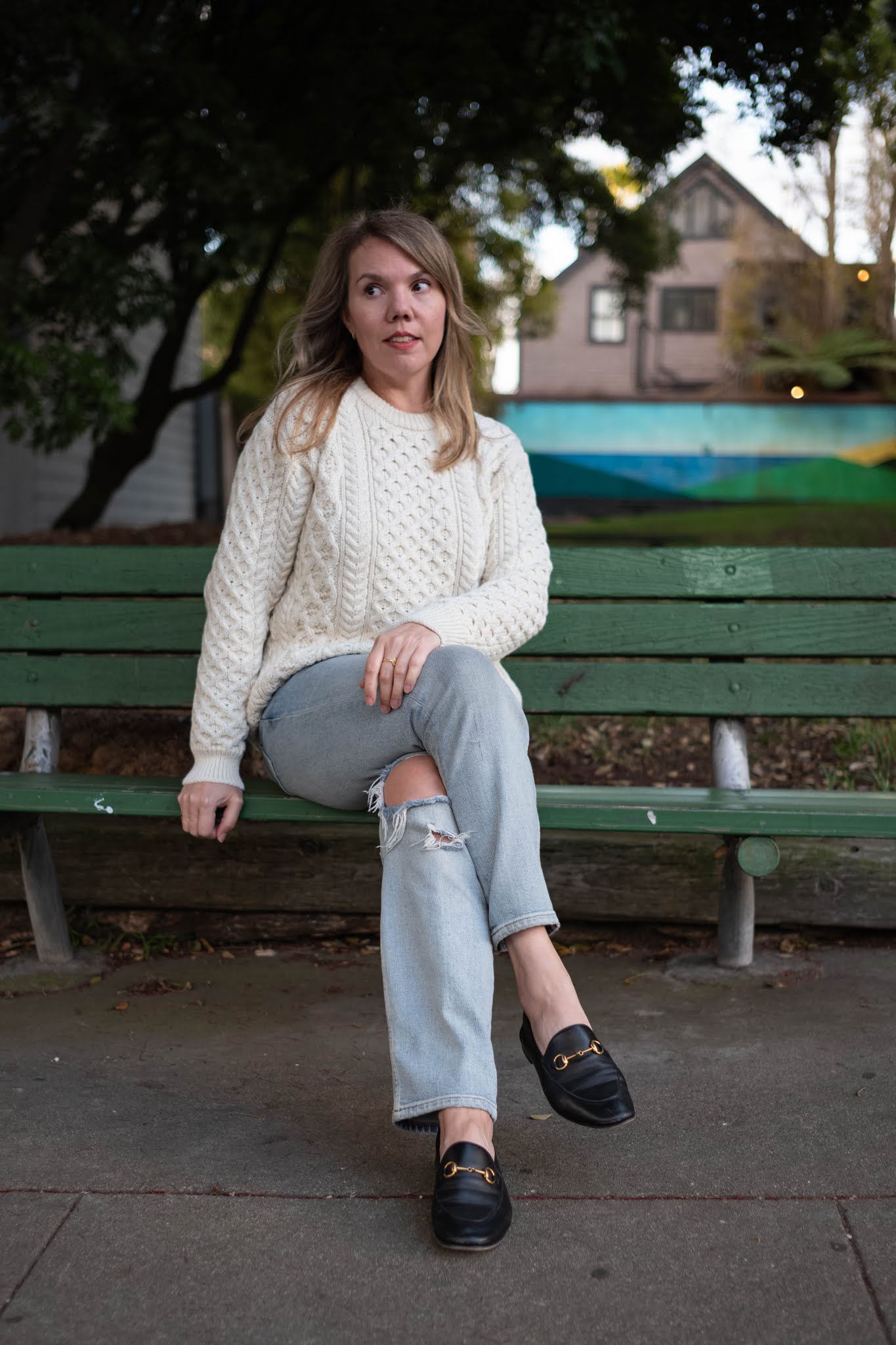 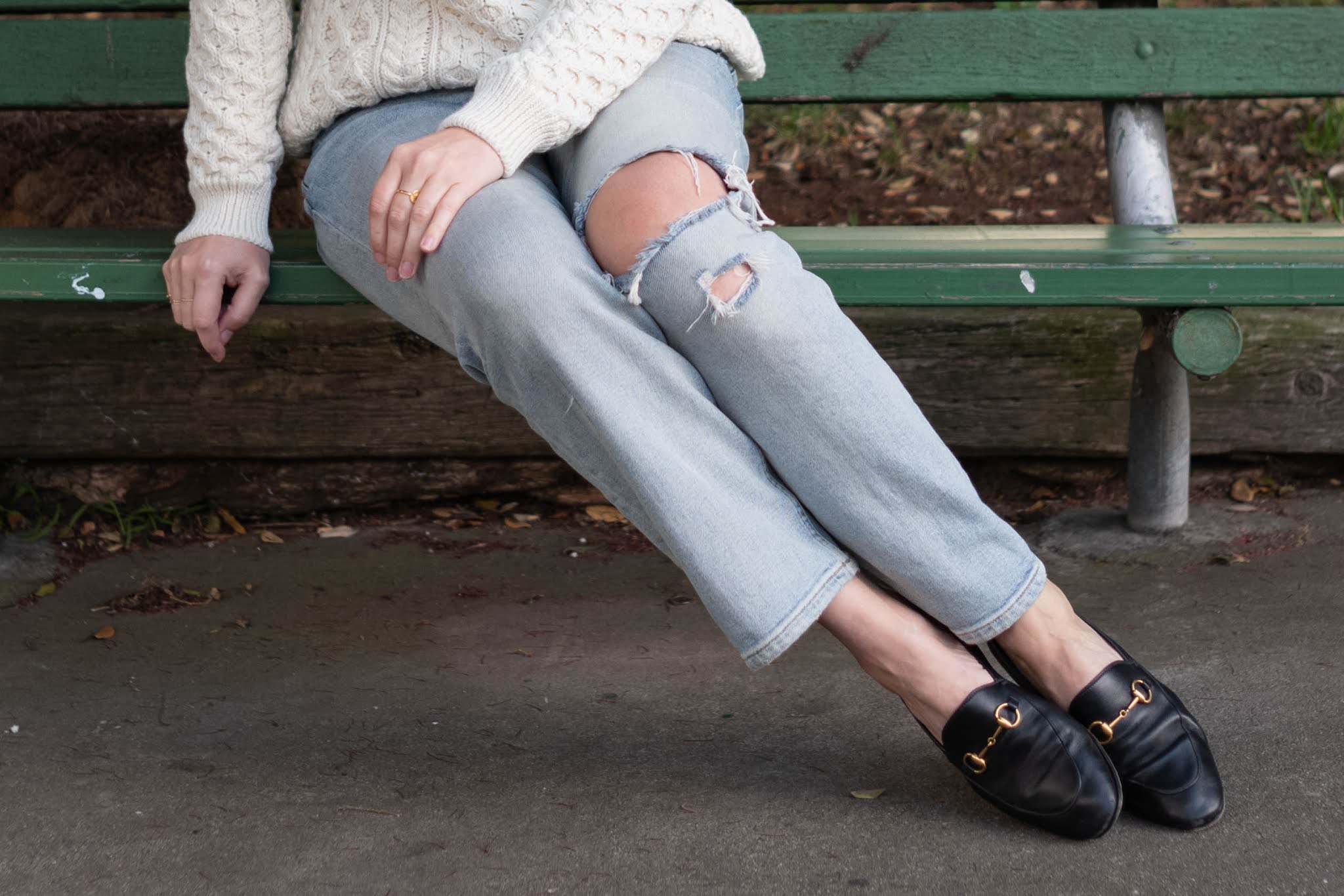 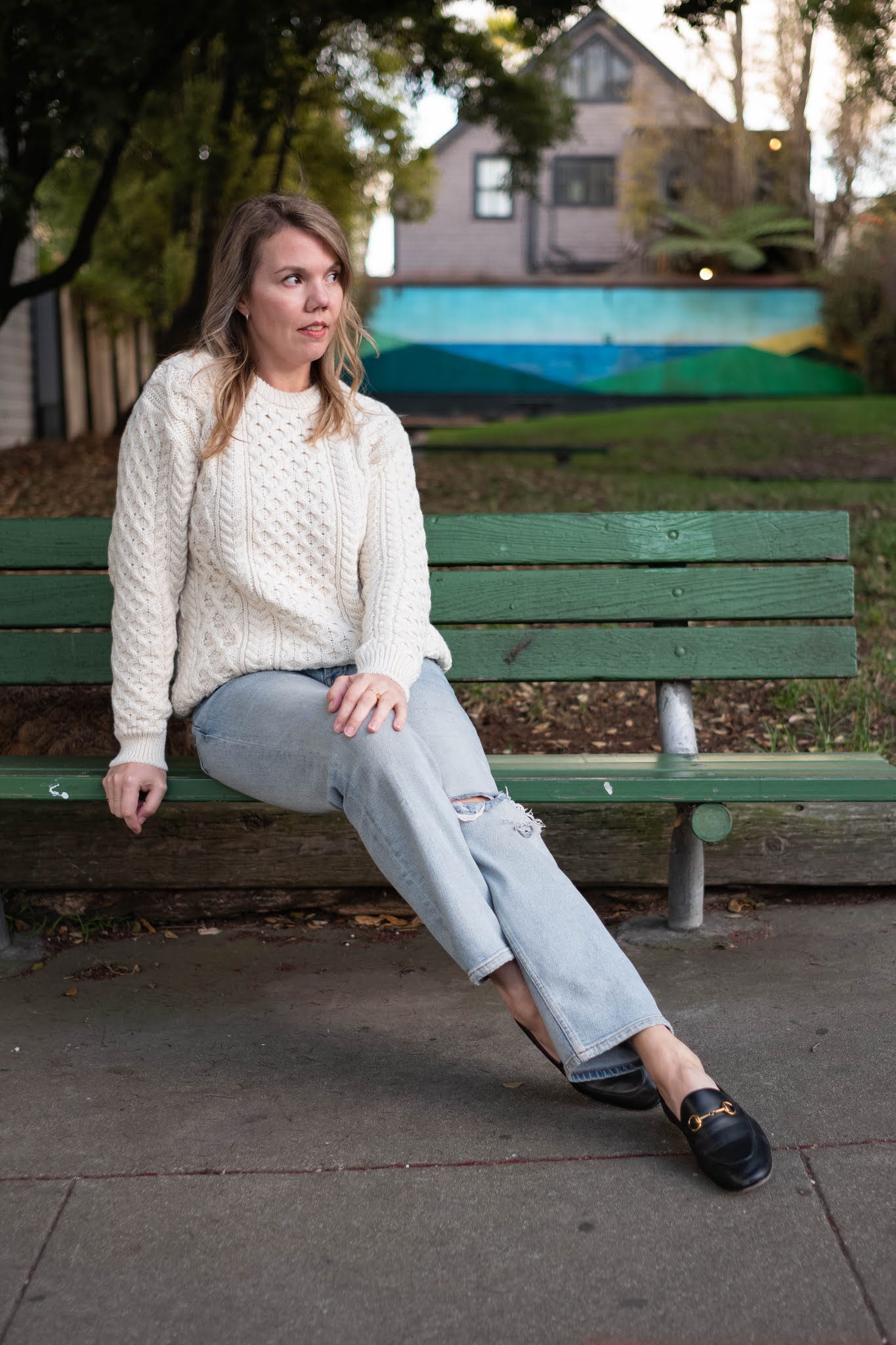 How to Set Up a Baby Nursery on a Budget

What to wear with a fisherman sweater