What to wear with lace-up sandals

This is the outfit I had intended to share last week, one that straddles summer and fall, which felt appropriate for just after Labor Day. Under normal circumstances, this would feel almost a bit too bundled up for San Francisco weather in September, which is typically the warmest time of year. But after a week of heavy smoke from wildfires and unseasonably thick fog, I’ve learned to roll with the punches. Which is a pretty apt way to describe how to handle seasonal transitions no matter where you live. Or the year 2020. So this look feels very fall from the waist up and very summer from the waist down; it’s a bit idiosyncratic, but so is life nowadays. Here’s how it all came together.

You Say Covid-19, I Say Hangar 18!
Fashion Rugs
“If I live through this, I want someo…
10 Symptoms You May Experience with F…
The Best Time To Visit Colombia 2020 … 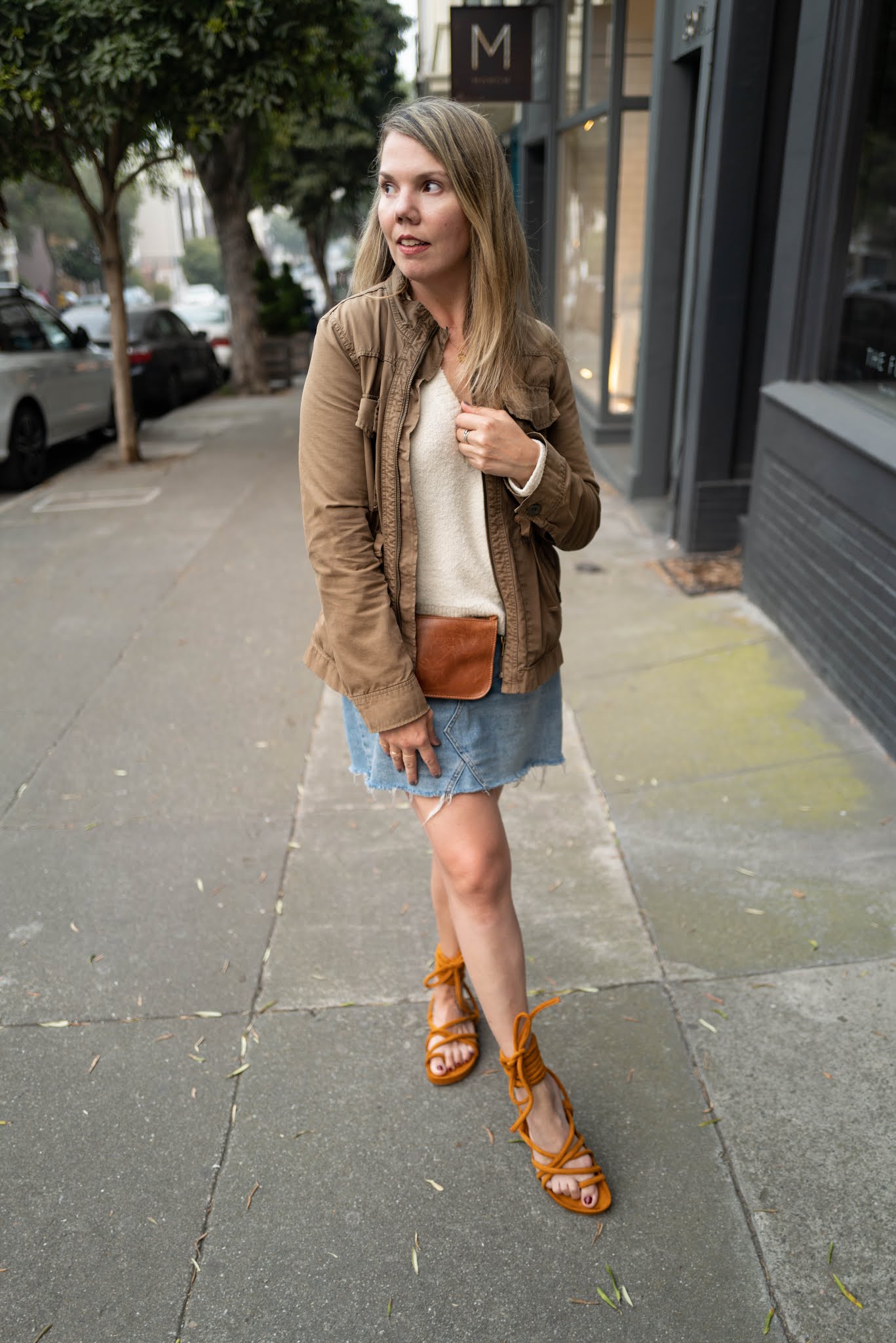 I had initially been looking for a more lightweight cotton-linen-type Sweater but couldn’t quite find one I liked; I added this one to my cart on Nordstrom Rack to meet the free shipping threshold, and I love it so much, I can’t even remember what else I had ordered in the first place. Pro tip: Everlane obviously had a lot of overstocked merchandise to unload earlier this year, and there’s a bunch of it now available on Nordstrom Rack. (To be fair, it's also 50% off on Everlane's own site, which I've linked to below.) Everlane tends to run quite big, but this sweater is the rare exception. I actually sized up to a large, which was maybe a size too big, but I do like the slouchier effect created by doing so. This sweater is super soft and snuggly, yet not at all bulky and surprisingly not too warm either—it’s mostly merino wool, which tends to be a super-adaptable fiber. Expect to see this one again later in the season. 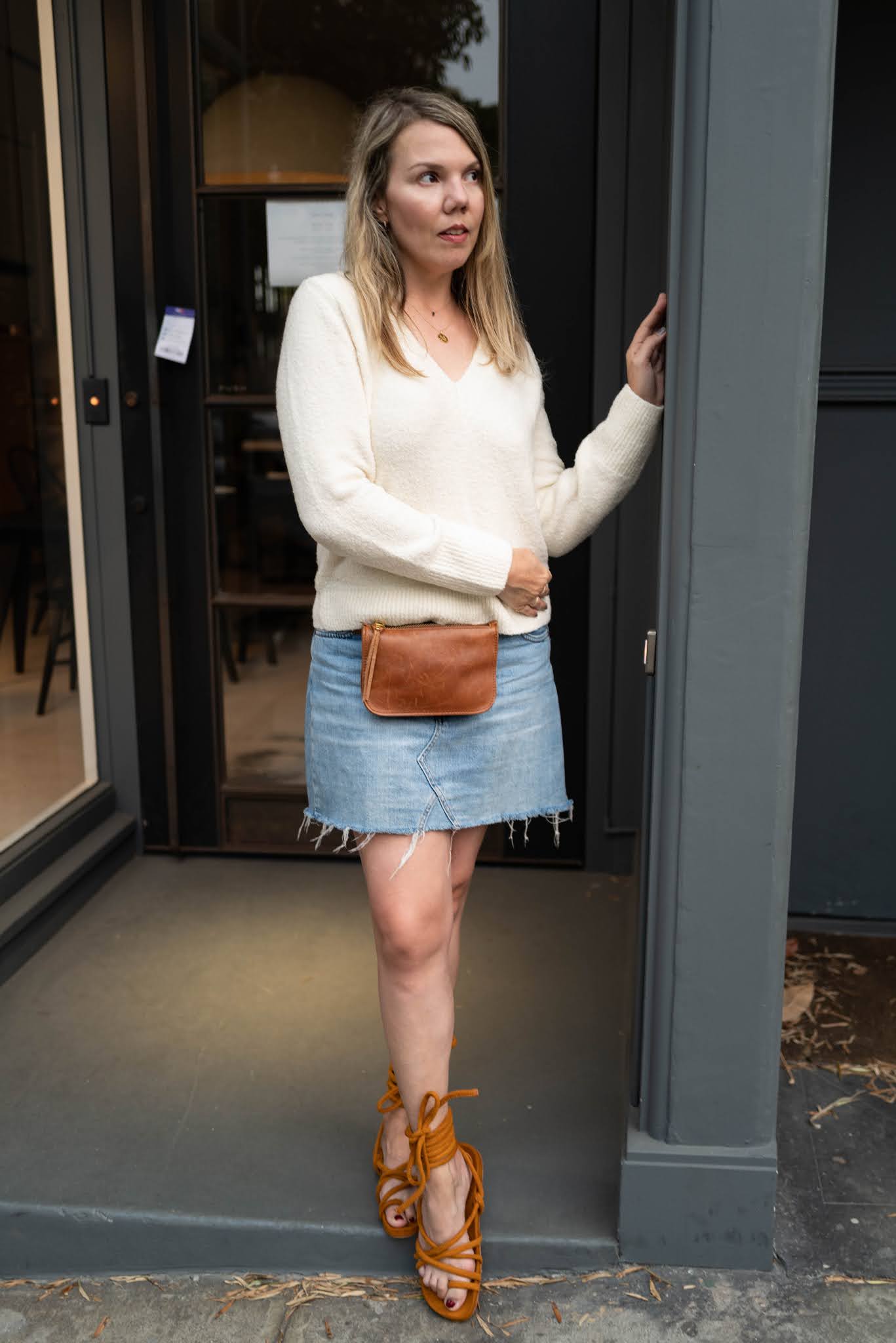 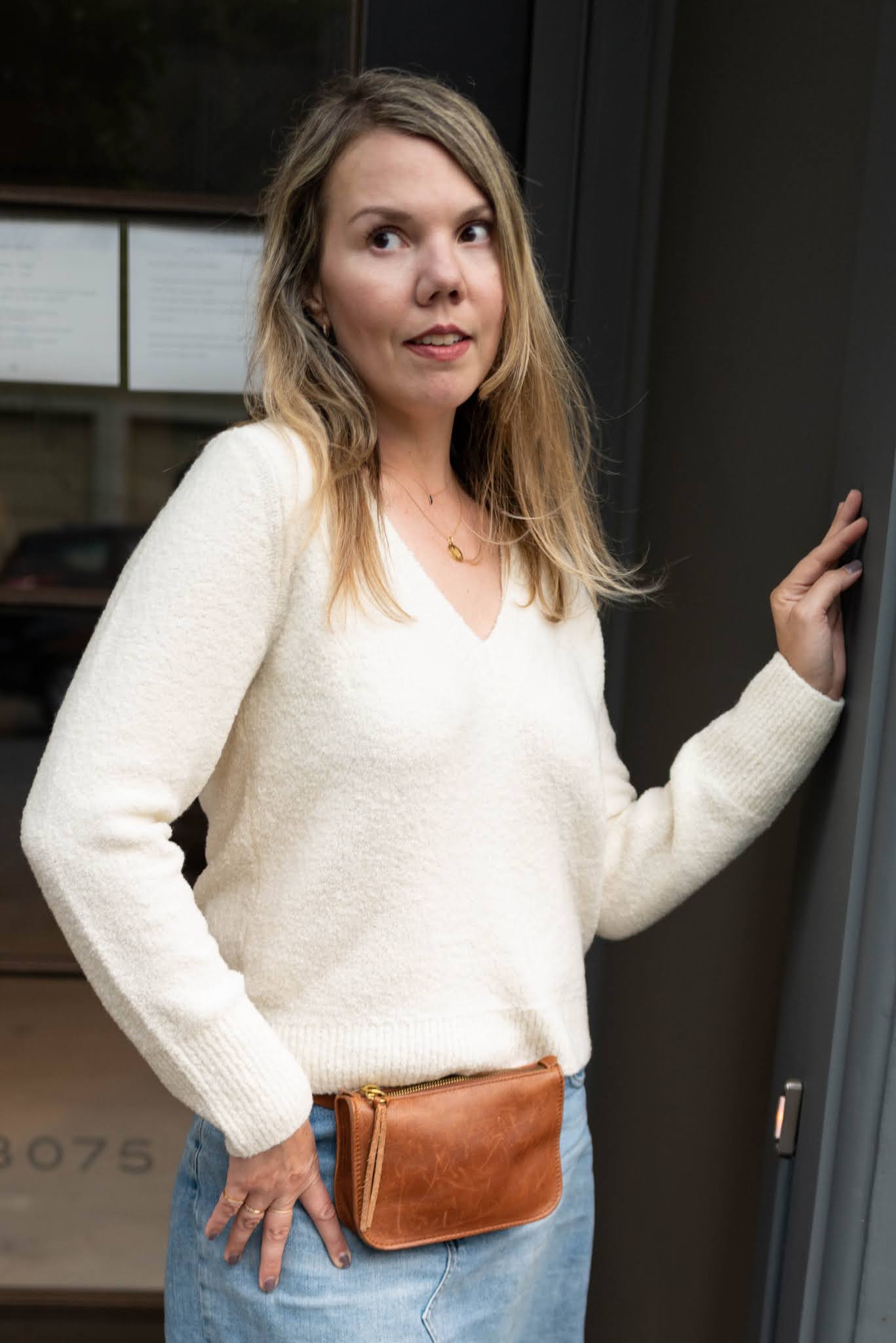 It’s been several months since I’ve featured my trusty J.Crew jacket (you last saw it with a boho dress), so now felt like a good time to break it out again, especially since It’s the perfect layer to shield against the fog when it’s chilly. I  obviously love the heck out of this jacket since I feature it all the time, but one more time for the seats in the back, it goes with literally everything. I’m in a small, which is generous enough for me to layer a bulky sweater like this underneath. 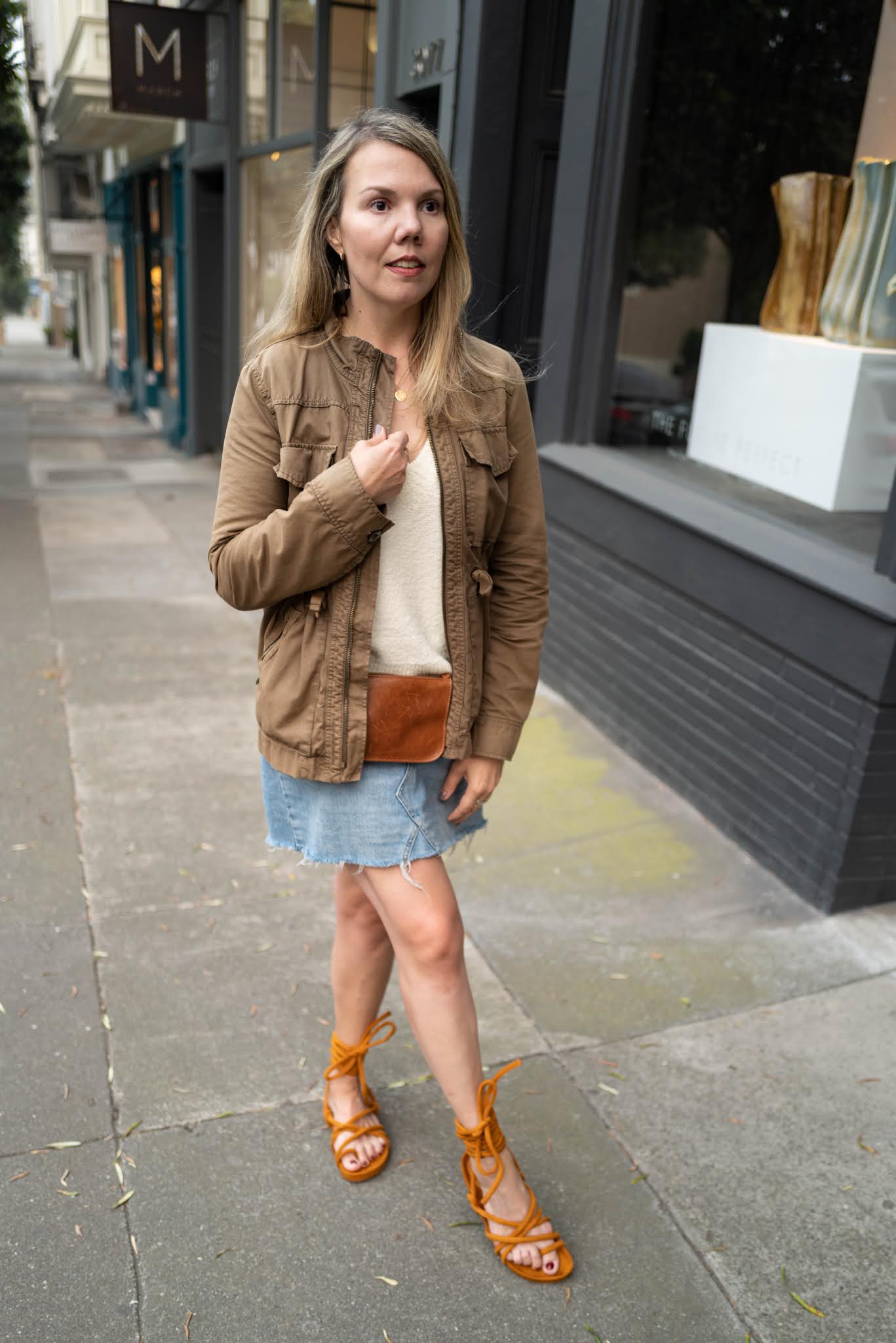 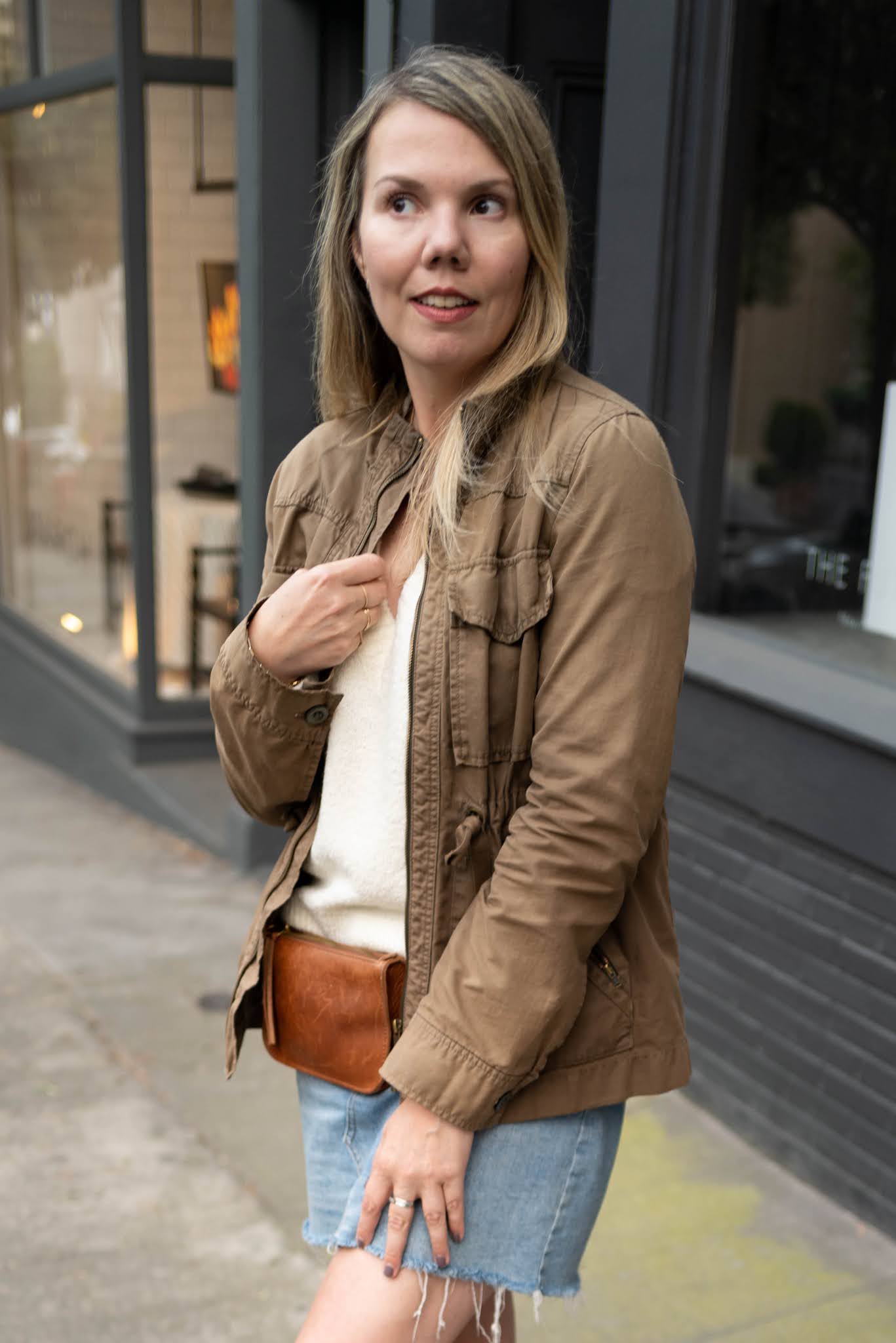 It’s also been awhile since you’ve seen my Topshop denim skirt, but it has the honor of appearing in one of the earliest Cheryl Shops outfit posts (when I went to the spa a gazillion years ago). Topshop keeps bringing this style back year after year, which makes sense—this skirt is super flattering and incredibly classic, but the frayed hem gives it a slightly cooler edge. I went up a size in this one, as I tend to do with Topshop—thanks for keeping me honest! 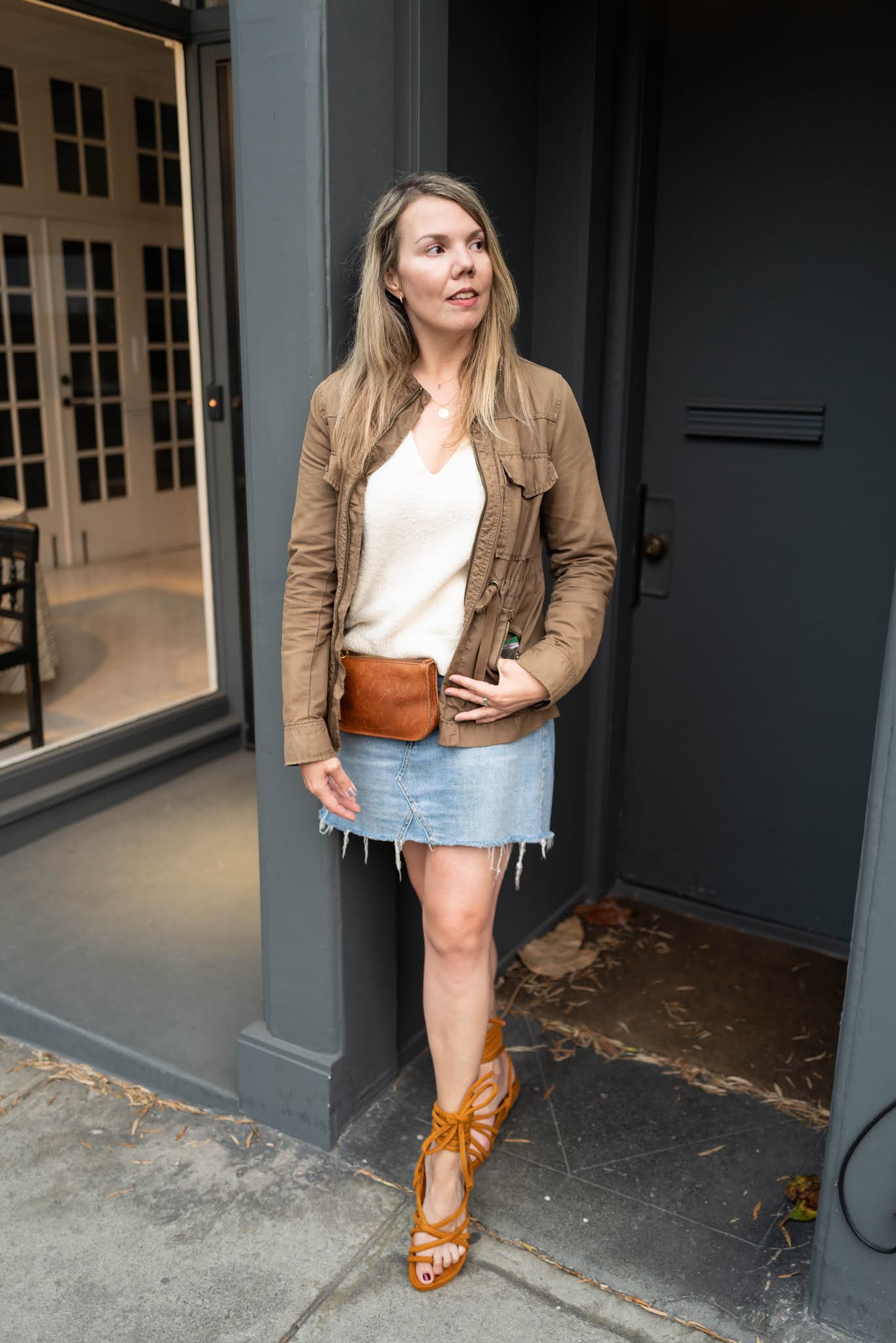 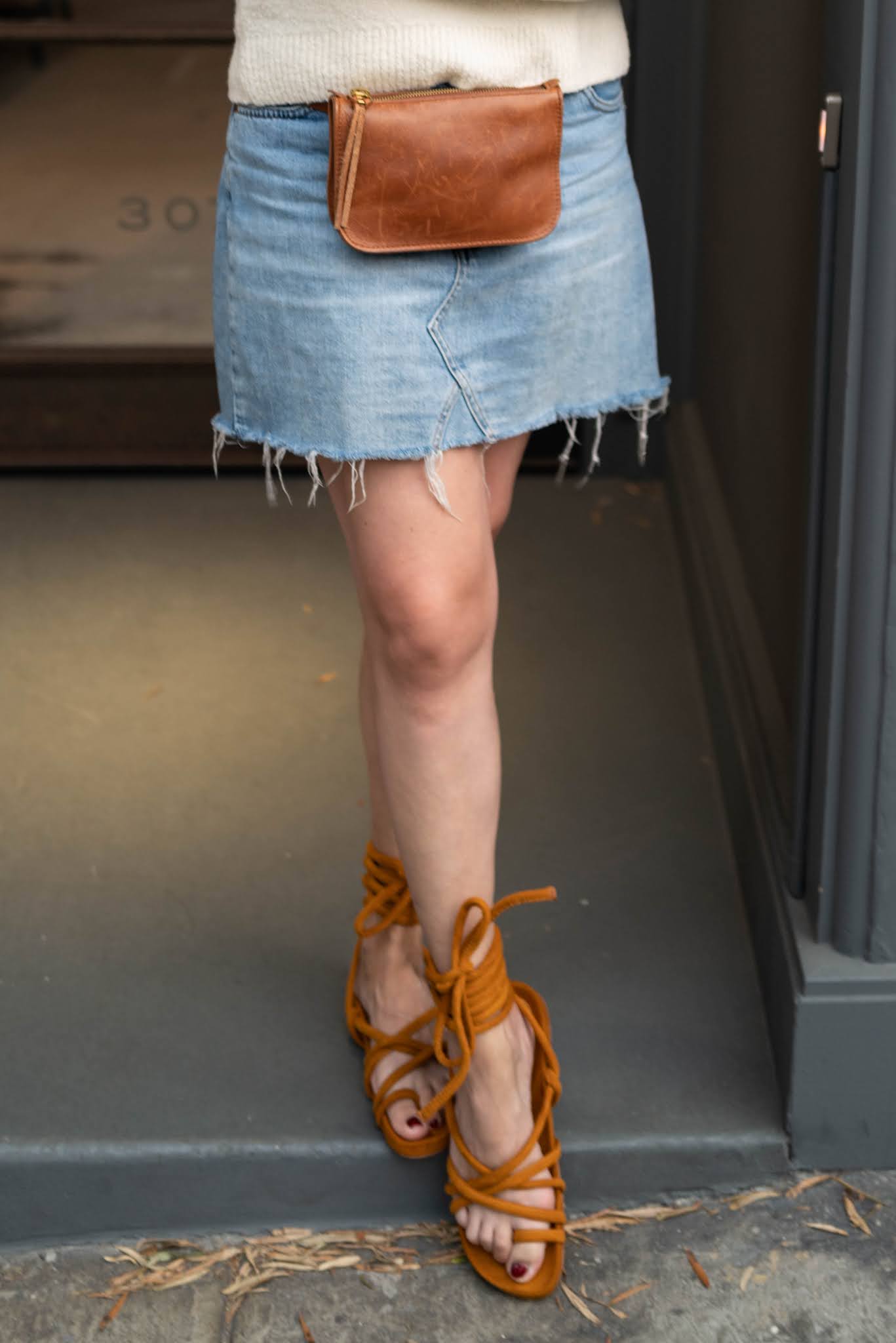 As I mentioned in my last outfit post, it’s been awhile since I’ve bought a new pair of shoes—so long that I can’t even remember the last time I did so—so I took advantage of the Labor Day sales and scored this pair of lace-up sandals from Mango. The laces are super long, so you can wear them all the way up your calves or wrapped around the ankle, as I chose to do since I don’t quite have goddess legs. The color is a bit more orange IRL than I had expected, but I’m kind of into it regardless. Now, if only I had the perfect beach vacation on which to wear them… The belt bag is from Madewell (last seen in Big Sur) and has been a go-to for me in these simpler times, while my fancy bags languish unused in my closet. But someday, right? 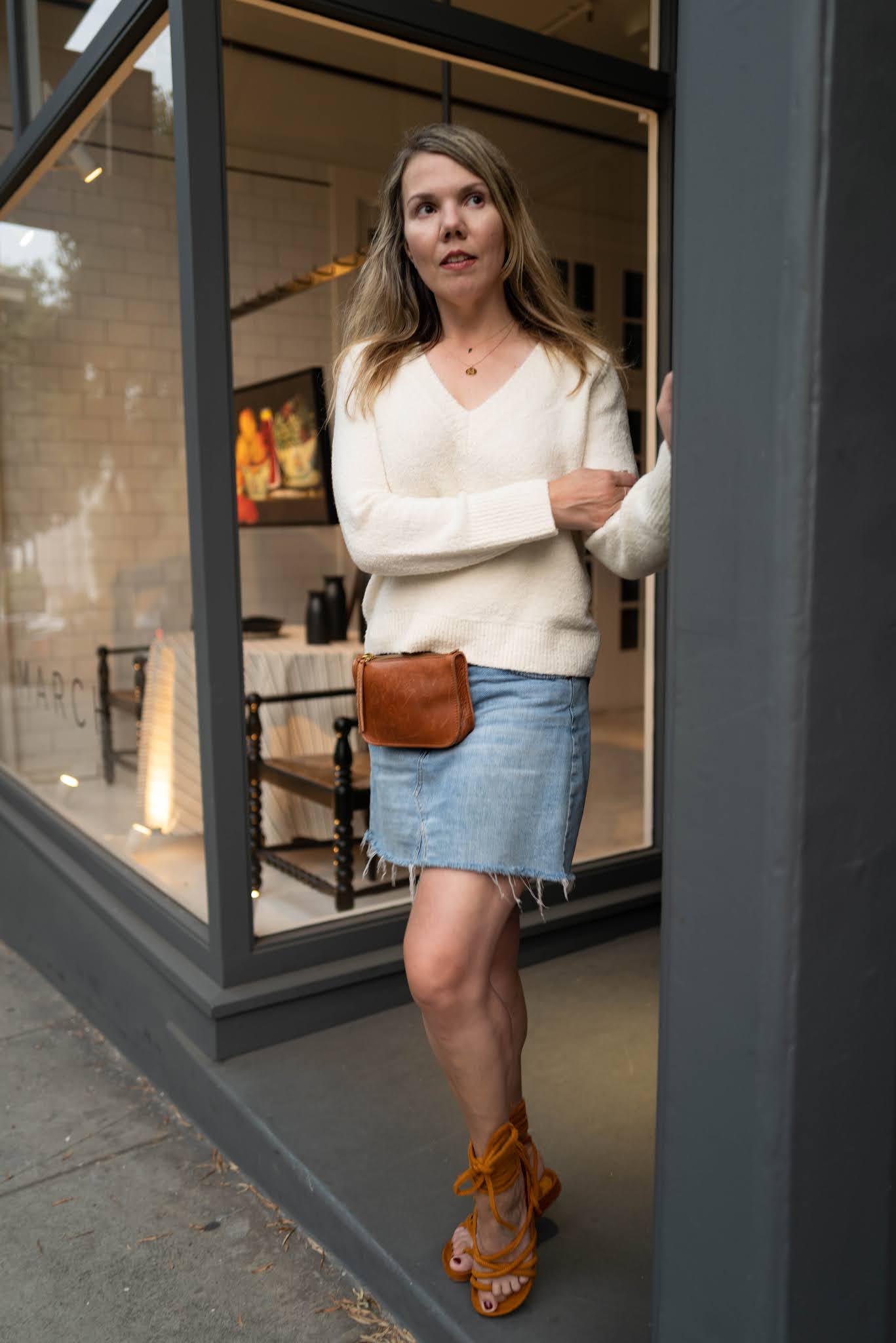 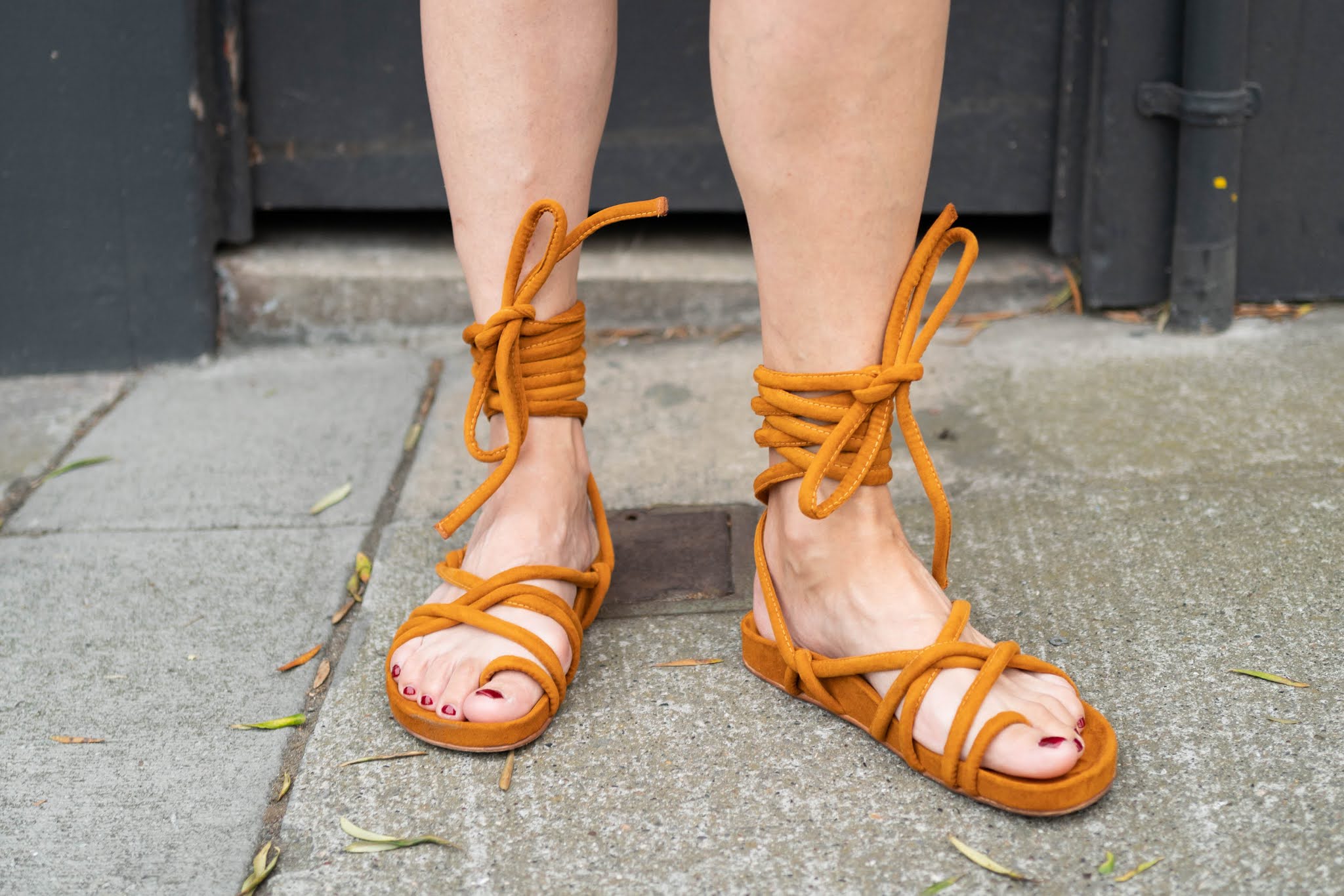 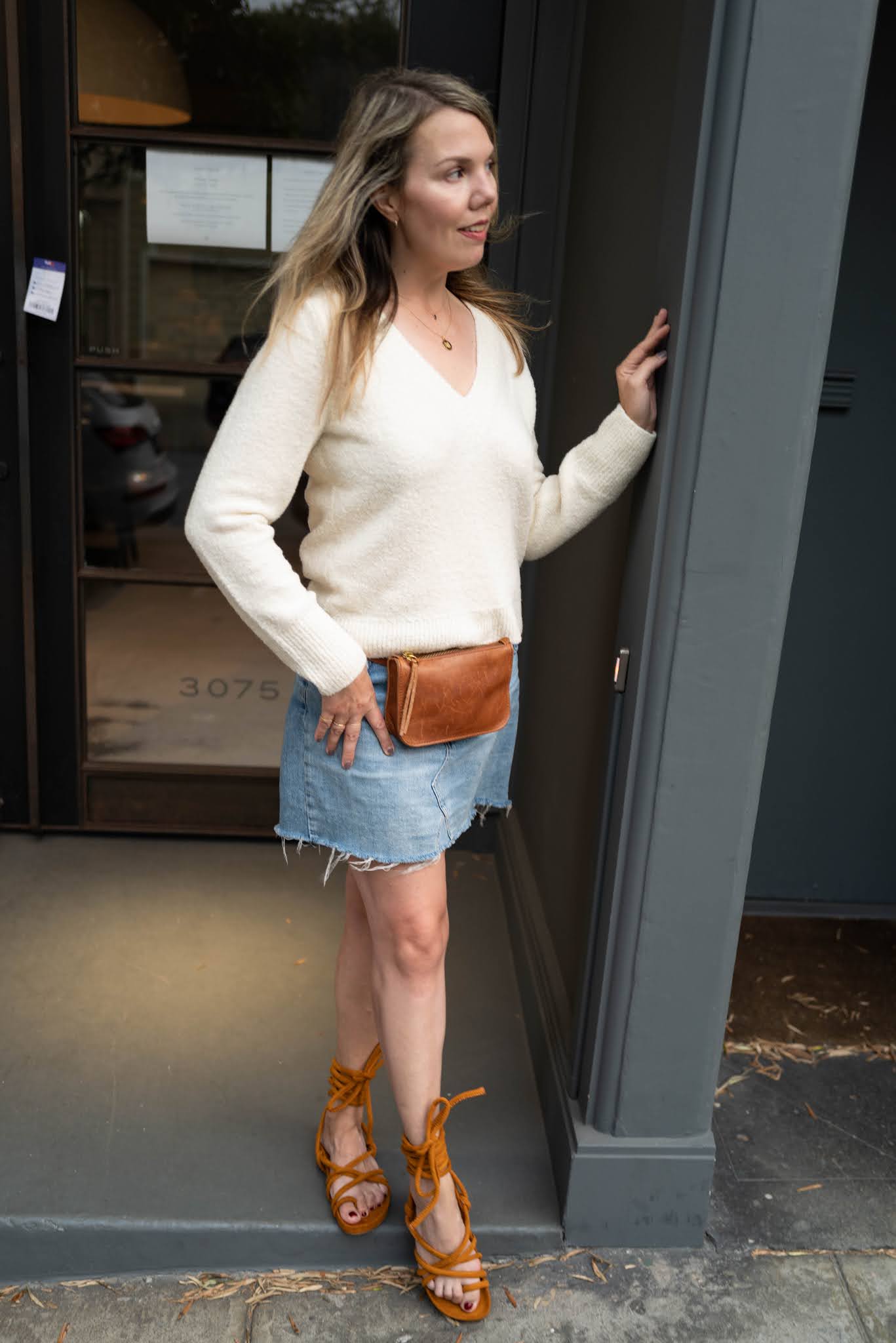 How to wash clothes in a washing machine?

What to wear with lace-up sandals