Alexander Rossi wins the Indianapolis 500 while running out of gas 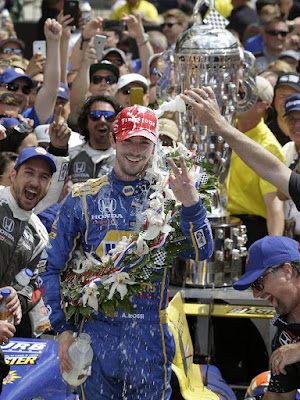 The Indianapolis 500 has been known for some unpredictable finishes. The 100th one came up with an incredibly surprising winner as American Alexander Rossi coasted to the checkered flag for his first IndyCar win.

Beard Bib – Solution For Messy Groomi…
What would happen to a modern-day Mos…
Nascar Driver Ty Gibbs Punches Sam Ma…
Baker Ross – 3 Easter Egg Sequin Deco…
Best homebrew games for your A500 Min…
In fact, you could argue Rossi is the most surprising winner in the 500's history. But before we say why, here's how he got to victory lane.
Yes, Rossi's car literally coasted towards the yard of bricks on the Indianapolis Motor Speedway frontstretch. There wasn't anyone around Rossi when he came to the finish line, thankfully for him because he was running on fumes. The strategy play to stay out while most of the leaders pitted for Fuel late paid off as Carlos Munoz, the first Driver who pitted for fuel, finished second, a quarter-track behind Rossi.
When the green flag flew with 33 laps to go in the Indianapolis 500, there was a chance the 100th edition of the Race was going to come down to fuel mileage. By sitting ninth at the final restart Rossi had the opportunity to try the fuel gamble.
It worked. After he took the checkered flag, Rossi radioed to his crew that he was out of gas. His last lap averaged 166 MPH. The pole speed for the race was approximately 230 MPH.
It's the first full IndyCar season for Rossi. He made five starts for Manor in Formula 1 in 2015 with a best finish of 12th at Circuit of the Americas. He's currently one of the F1 backmarker team's reserve drivers and is slated to be with them when the IndyCar Series isn't running.
He moved over to the IndyCar Series for 2016 with former driver and team owner Bryan Herta, who merged his team with Andretti Autosport. It was a bit of deja vu for Herta, who won the 2011 Indy 500 with Dan Wheldon via fuel mileage. Wheldon nursed his car towards the finish line low on gas and passed J.R. Hildebrand just before the finish line after Hildebrand hit the wall in Turn 4.
But while Wheldon's win was certainly a surprise, it wasn't too hard to envision him in victory lane. He had previously won the 2005 Indy 500 and his car was one of the fastest throughout the 2011 race. Sure, Rossi was driving for a team in Andretti Autosport that entered Sunday with three Indy 500 wins, but he had no major-series large oval experience until this year's Indianapolis 500. And he wasn't a factor at the front of the field at all.
The last rookie to win the Indy 500 was Helio Castroneves, but Castroneves had three-plus years in CART racing on ovals like Homestead, Michigan and Auto Club Speedway before he won the 2001 Indy 500.
The only other rookie to win the 500 won the race a year before Castroneves. And that driver is Juan Pablo Montoya, who also had run a full season of CART before he ran the 2000 Indy 500.
According to Odds Shark, Rossi's odds to win of +6600 were the 24th best of the 33-driver field. Montoya, Will Power and Simon Pagenaud were the co-favorites at +650.
The race opened up early in the second half when two drivers who had been the strongest throughout the first part of the race took each other out. Rossi's teammates Townsend Bell and Ryan Hunter-Reay collided on pit road and slammed into the inside pit wall. To that point they had led 64 of the race's 115 laps and combined for a significant number of the race's 54 lead changes.
Roger Penske, the famed Team Penske owner, entered Sunday searching for his 17th Indianapolis 500 win and is the car owner for those three pre-race favorites and three-time winner Castroneves. His team didn't have a good day.
Montoya spun out early in the race. He hit the wall and his day was finished. Montoya wound up 33rd after two wins and a fifth-place finish in his first three Indy 500 starts.
Power got an unsafe release penalty and was forced to attempt to work his way through the field. He couldn't get back to the front.
Simon Pagenaud also got the same pit road penalty and his car later had maladies. The three-time winner in 2016 and IndyCar points leader finished 19th.
Castroneves looked like a strong contender to get a record-tying fourth Indianapolis 500 win but a piece of bodywork behind the left-rear wheel started flapping in the wind and acting like a parachute on his car. Castroneves was about to be black-flagged to come to pit road and fix the issue but was saved by the final caution of the day (for Takuma Sato). However, Castroneves was never able to sniff the lead again.


This post first appeared on The Best News In 2016 All The World, please read the originial post: here
People also like
Beard Bib – Solution For Messy Grooming
What would happen to a modern-day Moses in America?
Nascar Driver Ty Gibbs Punches Sam Mayer After He Cost Him $100K!
Baker Ross – 3 Easter Egg Sequin Decoration Kits for 8.65€
Best homebrew games for your A500 Mini
What Exactly Predictive Analytics Is And How It Helps Businesses To Grow Faster?

Alexander Rossi wins the Indianapolis 500 while running out of gas

Subscribe to The Best News In 2016 All The World