“Just do something, ANYTHING, to stand up for our Constitution and for Freedom!” 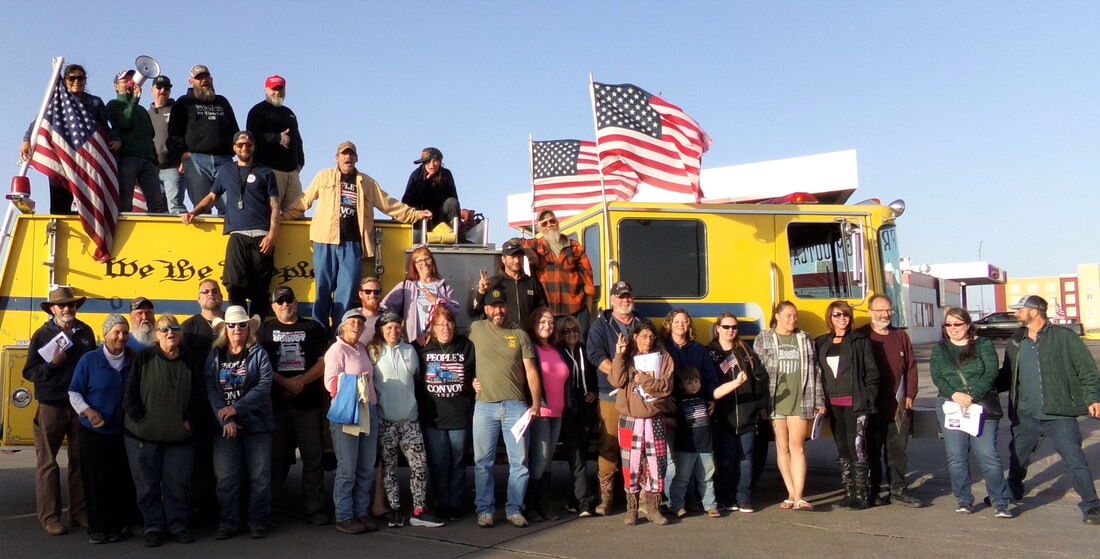 Dear Patriots, I'm so sorry for not writing much recently. There's been a lot going on, behind the scenes.

Actually, I just got home from the hospital. My ophthalmologist swiftly diagnosed my blotchy vision as a retinal hemorrhage + optical nerve swelling most likely caused by extremely high Blood Pressure...and sent me directly across the road to the ER for intravenous Blood Pressure meds.

He scared me straight by saying I basically "had a stroke in my right eye." This is my first serious health problem and I wish I'd taken care and kept on the meds but I was spared anyways. It could've been MUCH worse when my BP hit 234/139. Oddly, my first cousin, Chris, had a stroke in his early forties.

How come so many Christians don’t rea…
What’s On: Easter events for the fami…
MMOGA – Save 32% off Northgard
10 Best Programming Languages For Blo…
Dating Trends in 2022

Michael has been wonderfully supportive, driving me to and from the hospital twice this week (100 miles round trip). I'm going to rest all weekend but my friend, Patty, kindly agreed to Write a guest post about her recent visit with The People's Convoy! I love how she formatted it as a letter between two friends. :)

I was planning to write about several interesting non-convoy topics this week, but alas, it just didn't happen. Perhaps next week????

If anyone would like to write a guest article for the blog,  I'd be grateful. It's been terribly neglected the last few weeks and I've got to learn how to write passionately while staying calm....very, very calm. Hmmmm.

And now...what it's really like at The People's Convoy!

You asked about our experience meeting the People’s Convoy this week and I’m still processing but here are just a couple “snapshots”.

We had budgeted a certain amount for our trip to OK so when we came home with half the cash still in our bag, we decided to spend a night with the convoy in Nebraska and donate the rest to this good cause. We caught up with them just 150 miles north of our home in rural Colorado. We originally planned to drive along for a couple days but they had to make an unexpected stop in Sheridan, WY when the intense winds became a dangerous threat to the high-profile vehicles.

They have been on the road for close to 80 days now, logging thousands of miles crisscrossing the country. They are raising awareness about the Covid 19 Emergency Declaration and collecting stories from beleaguered Americans who have lost everything due to unconstitutional government overreach and media censorship. Many in the convoy have experienced those same losses and even though all forms of media try to ignore them, they are still meeting people, handing out flyers and holding rallies all along the route. 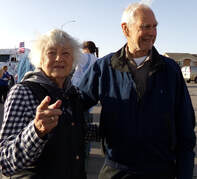 Jim says it struck him that we didn’t see any evidence of the rumors that morale is low in the group. They are a talkative and friendly bunch, good people on a mission. The number of drivers goes up and down and up again as people roll off to attend to family business or just the business of making some money so they can rejoin the convoy somewhere down the road. They still pick up fresh drivers at a lot of the stops, people who can set aside their lives for a time and devote those days to this honorable endeavor. We met a charming elderly couple, “Everybody just calls us Mom and Pop!” They left southern CA with the first wave of the People’s Convoy, stayed in MD, followed all the way back to CA and are still in for the long haul back to Washington, DC.

We talked to Wendy and Tracy, both women traveling alone who couldn’t resist the call to make a difference. They have both experienced the kindness of other drivers when their vehicles broke down. Wendy told me that people approach them wherever they stop just to thank them for what they are doing, “…any of them with tears in their eyes and sad stories that break my heart.” And Tracy felt like a caged lion at home, pacing and smoking and waiting for an opportunity like this where she could, “Just do something, ANYTHING to stand up for our Constitution and for Freedom!” 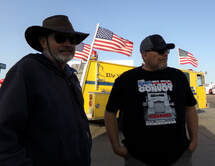 We talked to Marcus and Marco, to Santa and some of the live streamers who have kept the evidence, the unaltered, uncensored record of how they are getting the word out and the hope they have for the restoration of all liberties for all Americans. We spent the day giving handshakes and hugs and the promise to continue to support these patriots with our prayers. May God ride with them!

Thank you all for financially keeping my website going for almost two years, over 300 articles, thousands of headlines andtwo convoys! I hope to continue writing for you for many years to come but I've gotta tend to my health right now in order to do that.

“Just do something, ANYTHING, to stand up for our Constitution and for Freedom!”