A Ball of Wool

Some say there are no random events in the universe. It follows then that there are no random thoughts either. All thoughts have an origin, a place where they come from and a reason they are born. Now, I may not know why I have this gnat-of-a-thought buzzing over me like I’m its gnu, but it’s there. This thought. By talking about it I want to share its buzz.
Let’s consider our Self as a Ball of Wool. Soft, bright and snugly wool. Over the years this ball of wool uncoils itself in all eight directions, and then eight more, and more, and so on. By uncoils I mean this self ‘lives’ life. It um ... gives, takes, talks, keeps silent, does, doesn’t do, learns, unlearns, writes, erases, wants, rejects, makes, breaks, grows, plucks, cooks, burns, works, shirks, smiles, keeps smiling, runs, sits still, opens up, closes in, uses mascara, rubs the lipstick, falls, gets up, makes friends, manages friends, switches on, or off, carries on, and on.
Your Self as you knew it long back when you learnt what self means constantly becomes and unbecomes. But ‘unbecomes’ is no word so let’s just say our Self constantly becomes. It sounds more positive anyway! So when we do all those things (separated above with tiny commas) over our lifetimes our Self becomes. Some would say evolves and grows. Okay. Good. But then what is left of that ball of wool – the soft, bright and snugly wool we began with, after all the slow uncoiling and fast uncoiling and mediocre uncoiling happens and happens and maybe on a very cold, contemplative morning it begs to be noticed? What does it become, really?
Tiny.
Perhaps the size of the zygote where it all begins. Perhaps tinier.
Over the years, while the Thread of wool spreads around forming a messy maze which may have its own method and past motivations, the ball of wool constantly spins to finally become minuscule at the end of the day. Somehow, without you noticing, you’ve made your Self out of sight! Or to obsess over the metaphor (winters!) uncoiled so much that you’ve forgotten what the ball of wool was about in the first place. It’s barely there now. No magnifying glass, no microscope will make you see what’s left of what was once so … different!
It is a terrifying thought, of this sense of vanishing Self, despite the knowledge that you remember close to nothing of what you once were or wanted to be. This thought shakes the chair you sit on, makes its legs jelly and you sink, heavy with gravitas. All you see are the endless loops and hoops of the thread all around you. So much of it that it doesn’t even seem to be yours! Did it really come from you? Is it you? Was it? Who is you?
Oh boy! I did that? Why would I say that? Oh no that was loony of me. Sheesh! Magenta? No. No. That idea could never have been mine. Are you sure? Positive? Really? It’s okay to not know. Wow, I didn’t know? But I never supported such differences. Oh. I did? Of course I believe in my opinions! I said yes! I said no? Ho! Organic food sucks! I hate that woman. I really hated that woman? Why? Oops! I got drunk? But that’s so not me! Seriously? Why would I close my door on their face? I made a face at her? You’ve got to be mistaken! No? Oh!
Ahem. Phew. So much. 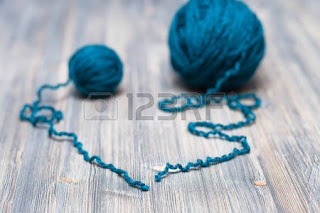 So on a certain day, the age and stage of which may strike you by surprise, you decide to start coiling the thread back into a ball. Give it some pattern, some semblance of order. Like a ‘this is me!’ moment where the said 'me' may be as unchanging as the sea, but still. Order order. You don’t have to be old and wise. You can be young and wiser and just start pulling back your threads - slowly, sneakily, sassily or sagely. Knit it back. Or just yank it into a hank like our grandmothers used to do using their knees, perhaps never otherwise sitting with their legs so apart but their hands as ever dexterous. I wonder now if by some Jungian connection they had originally thought of this "Self= ball of wool", much before I claim copyright to it some generations down. Would this metaphorical connect explain the passion with which they knit and undid sweaters and mittens and shrugs and shawls with their bony, wrinkled fingers? What were they thinking when they did that? What were their thoughts?
Winding up our Self into a whole.
Sounds oxymoronic! Could it mean anything, though?
Well, you could be honest and straight more often than not. Forget politeness and remember to call a faded sweater a silly, raggedy, useless blot in the name of all sweaters of the world! Choices of yore which now seem compromises to the core can be picked and thrown away like lint on your old fleece. Give in that resignation! If your anxiety has been reduced to a ‘usual habit’ make sure you don’t invite the nitpickers when the next prickly party in the head-heart region strikes. If the tray of sweets was slipped away from right under your nose, don’t bother to serve that gajar ka halwa when your door bell rings next. If your heart says sleep you tell the imp to go fly a kite (but keep away from the boundary wall and wear your sneakers will you!) and you sleep. If they read you to shred you, you make sure you make mental noodles of their books! If they think you talk too much stop talking to them entirely. If they mock those you love then rip open the new set of knives. If someone else wants peace and not your dissent, give them a piece of your mind and then the peace. If another your pound of flesh, take it instead. If they think your hair...
Lord! I sound mutinous… but I guess what I’m saying is, when you wind up the many loops you’ve surrounded yourself with, knowingly or otherwise, you start seeing yourself better. You recognize what you feel and you give priority to the sounds of your own silent sighs behind the smiles. Because you hear them now. Because maybe sometimes only you will hear them and understand them.
Of course, you can’t really become a zygote in a fallow tube or some such, so you leave just enough thread out there to know and be known for who you choose to be at that point. Just enough thread to roll back. Just enough to be an extended hand. Never enough to be tugged away. Gradually, you find that lost Self shaping up. May not be a perfect round figure anymore. Nope. But a sphere’s not so bad either.
And while you wind up your Self into a whole, if you feel like rambling publicly about it in one thousand words without a second look, well, you go ahead and do that too. Self-help, you know!

How To Get Aligned With God
It’s Me – Chapter 4
Sexy Games for Married Couples
4 Financial Tips for Entrepreneurs La…
The World Needs More Furry Bloggers
Copyright Sakshi Nanda 2013 at sakshinanda.blogspot.com

A Ball of Wool