And The Story Goes ... Episode VII

June 9th 2010
View original
Waiting in the car outside of the gym, Jennifer reflects on the reason she sits here; a conversation while attending Berkeley’s Homecoming. Bored and hoping David would want to retreat early from the alumni stories, she wanders over to the Bear’s Lair. There, while reviewing the appetizers, Lisa interrupted, “Is that a Tri-delt ring?”

“Yes it is. How’d you know? Are you a Tri-delt?” Jennifer pried.
“Of course; that’s how I knew. Although I admit I’ve never seen that design. Where’d you pledge?”
“Stanford, Omega chapter; David had this ring designed for me while we were dating. Where’d you suffer your rush humiliation?” Jennifer gibed. 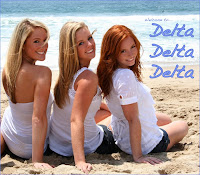 And The Story Goes ... Episode VII