And The Story Goes ... Episode IX 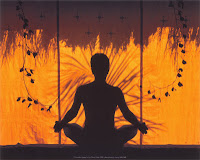 “Hmm yea right there. Just like that, don’t stop!” Please don’t move from that spot. That’s it, oh she feels so good Avery thinks as Kennedy partakes in her nectar. With her upper back and head propped up on two pillows and her thighs open like the Sukhasana position in Yoga – legs extended, Avery uses both hands to secure her lips on either side ensuring Kennedy has complete access to her protruding clit. Her body jolts from Kennedy’s navigation to ‘the place’ prompting Avery’s insistence that she stay suckling right there while thrusting her pelvis forward to guarantee Kennedy’s tongue stay on target. ‘The place’ being the one of many spots that causes the body to surge into an insatiable quest for climax which is why Avery is panting and pushing her middle between Kennedy’s lips.

Not quite five feet, ten inches in height, Kennedy’s legs extend beyond the queen-sized bed as she finds sustenance in Avery’s juices. Her gluts flex as she grinds and slightly pumps the sheets reflecting on the last time she entered Avery. Knowing their time was short today, they opted for strictly oral sensations instead of their usual full contact romp including Trish, the affectionate name given to the harness that houses whatever curved inches Avery wants to receive from Kennedy. Having to curtail their encounter, a thought sporadically appearing in Avery’s mind, initiated the hastening to crescendo. With more time, she’d want Kennedy to explore further but time is of the essence right now.

I bet Vanessa has text me. Hopefully it wasn’t too long ago. I’m gonna have to get off later. I should not have tried to cut it this close; Avery would’ve understood a change in plans. She does not sweat me on my schedule. What the hell was I thinking? Let me not even try to lie to myself – I was thinking about these thick thighs wrapped around my head like a vice. Damn she juicy; that’s right give it all to me Kennedy mulls feeling Avery’s body convulse, jerking and spewing a liquid feast. Oh yea! Now that was worth the trouble I might get in later. Mmm, I wanna put it in your mouth so bad girl, but that’s gonna have to wait till next time. Let me hurry up and get going before I change my mind and start really causing some problems.

“I absolutely cannot picture my husband taking it in the rear. Can you believe I’m saying this? It’s absurd! If I told you the countless thoughts I’ve had about him and another man you’d shoot me. I need to get off of these pain killers; they’re affecting my judgment. Ever since that accident I haven’t been myself. What should I do Karen?” Jennifer questions.

“Well um okay, I’m a little in shock right now; give me a minute to get my bearings.  First you need to try and relax. Like you’ve said, you’ve been taking some pretty strong meds. Did you think David was sleeping with men before your accident?”

“I never thought anything until his school reunion. One of his old classmates told me about a torrid affair David had with another man. How could he do that to me?”

“Wait, slow down Jennifer—a stranger decides to spin some erotic tale about your husband and your faith in him goes out the window?  Who was this person and why should you trust them? What about all of your years with David? Doesn’t he deserve some credit?” Karen defends unable to picture David being any man’s man. Shucks, David is the last person anyone would suspect of taking it; giving it maybe. Nah, not him, somebody’s just messing with Jen’s head. Maybe her doctor should take down some of the milligrams in those pills. I wonder if she’d be just as flabbergasted to find that I’d follow the contour of her tanned body before ever looking at David. I can barely recall all of Brad’s anatomy and I sleep with him. “Have you ever seen anything that made you question whether he was straight?”

“I know, I know but she sounded so convincing, like she knew what she was talking about.”

“Who? Who told you all of this? I’ve never heard even a whimper about David’s sexuality being something other than straight.” Of course I haven’t heard any mention about myself either, so I’m not sure that logic is the catalyst to any real conclusive findings, Karen reasons, awaiting Jennifer’s explanation.

“I can’t remember her name; it’s not like I knew her—I was trying to figure out what brew I wanted when she sauntered over to me.”

“You let a drunken woman put ideas in your head about your man? She probably was tore up Jen.”

“I guess you had to be there. I felt she knew my man better than I did; like I was an outsider in my own relationship. I don’t think about it a lot but I just wonder ya know? Especially now Karen; it keeps gnawing at me.”

“Why now? Is it because of the accident?”

“I wish it were. Do you know that on the day of the crash I was spying on my husband? I was messed up and confused and wanting to tell him about my doctor’s appointment when I started getting suspicious. David is wonderful but sometimes he disappears out the bed or seems to go to the gym kind of early; I used to think nothing but now I just don’t know.”

“What doctor’s appointment? Is something wrong? Are you pregnant? I know y’all were trying. Did you tell David whatever it was?” Karen inspects eager to hear answers.

“Jennifer, he’s your husband and I’m sure he would want to know. He’d want to support you no matter what your doctor said. Can I help in any way?”

“Yes you can; I’ve been holding this in and that’s not healthy. Dr. Tomell told me I um …” Tear droplets ski the slopes of Jennifer cheeks before she finishes. Trying to prevent an all out cry she keeps softly sniffling, when Karen’s phone rings. Showing Jennifer the display indicating the call is from Brad, she signals the one moment and steps out the room.  Taking the time to get herself together, Jennifer grabs some tissue, leans on the granite counter and wipes her face. Sighing loudly, she whispers, “Would you be so consoling if you thought my husband was boffing your man? I doubt it. Maybe you need to hear exactly what was told to me. Maybe you’ve seen something I haven’t. Why should I be the only one carrying all of this? You asked if you could help; how about I give you a scoop of truth. Yeah, I need your help Karen.”

*******
Stay tuned and find out what happens next, Monday, June 14th 2010.
What did the doctor tell Jennifer?
Is Karen going to find out that Brad is the one rumored to have been David’s lover?
Is Kennedy with anyone exclusively?

And The Story Goes ... Episode IX