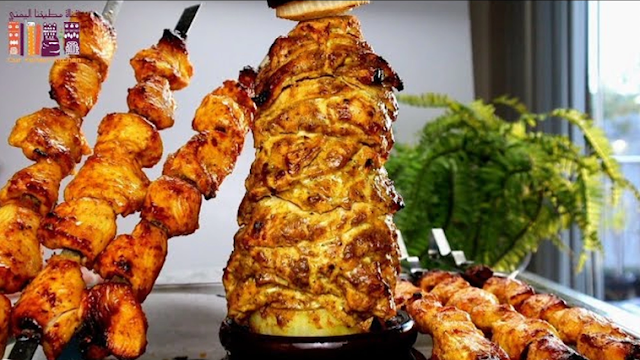 One fourth of a cup of lemon juice

One fourth of a cup of canola oil

One tsp each of cumin, paprika, onion powder, garlic powder

Half a tsp of cardamom, cinnamon, cloves, ginger powder, black pepper, and turmeric

Half a tsp of salt

I used a large chicken breast

Cut the chicken breast into cubes

Let's make the marinade for the kebab

Garlic and hot pepper to taste

One fourth of a cup of yogurt

One tbsp of pepper paste

Half a tbsp of tomato paste

One tbsp each of coriander and paprika, and half a tsp each of black pepper, cardamom, and turmeric

Half a tbsp of salt

One fourth of a cup of lemon juice

One third of a cup of olive oil

Blend in the blender

Pour the marinade over the chicken

Cover a raw potato with parchment paper and aluminum foil

Put it in a small oven safe bowl

Stick the skewer through the potato

A this slice of onion

Use more skewer sticks to support it from the sides

Place it in an oven safe pan

Roast the shawarma for about 30 minutes