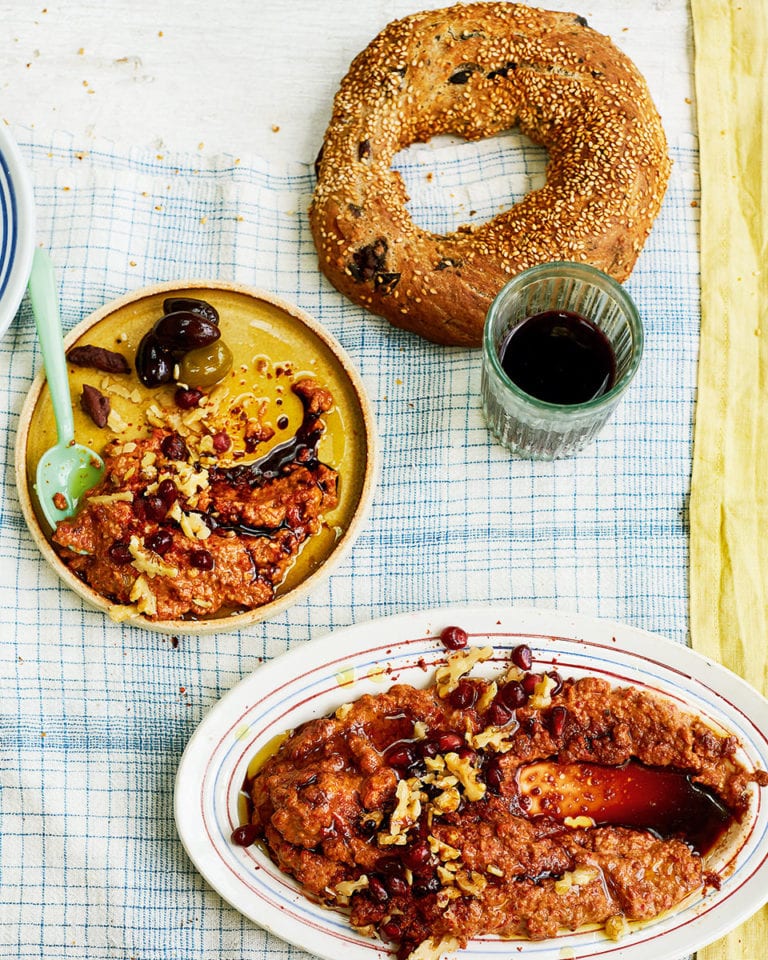 Muhammara is a red pepper dip that makes a fine addition to a big mezze feast. Try Georgina Hayden’s epic recipe and serve with her olive bread.

Pestle and mortar or food processor

1. Using long-handled tongs, grill the peppers over an open flame (gas hob or barbecue – see tip) for 15-20 minutes until tender and charred all over. Put in a bowl and cover with cling film to loosen the skins. Once cool, peel off the skin and discard, along with the seeds and stems.

2. Crush the garlic and chilli in a large pestle and mortar (or whizz in a food processor) with a good pinch of salt. Add the cumin seeds and pound/whizz again. Roughly chop the peppers, then add to the mortar/processor with the breadcrumbs, lemon juice and 2 tbsp pomegranate molasses. Work together until well combined but with some texture.

3. Add the walnuts to the mortar/processor along with a good pinch of black pepper. Add enough extra-virgin olive oil to loosen, then taste and tweak the seasoning. Spoon onto a serving plate, drizzle with the rest of the pomegranate molasses and a little more oil, then serve sprinkled with the pomegranate seeds and pul biber.

- You can also cook the peppers under a very hot preheated grill, turning occasionally, until charred.

- The muhammara will keep in an airtight container in the fridge for 2-3 days.

- Pul biber (or aleppo pepper) is coarsely ground Turkish chilli flakes with a deep flavour but mild heat. Buy from Waitrose, or online at souschef.co.uk. If you can’t find it, use good-quality paprika instead.