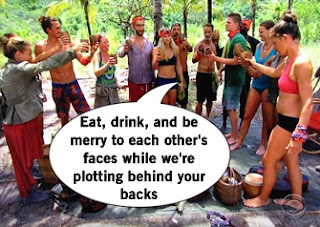 Savage's latest petulant tantrum about being screwed over has short consequences, as a monumental moment arrives: the merge. For the first time ever, the tribes have merged at 13 which means a total shitstorm is brewing. Everyone moves in together on Bayon beach and throws on their clean and not smelly orange buffs, sharing a celebratory merge feast with giant hunks of cheese, bread, and everything else that makes me hungry as I write a recap. It's all kumbaya when you've got a loaf of bread in your hand, but everyone is itching to end the eating to begin strategizing and saving their butts. 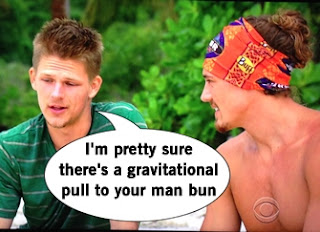 Right away, the Bayon Bro alliance is back. Savage's mind is just so boggled at the "stealth" moves to take out Woo because I guess the guy thinks no one ever schemes behind his back. In order for the Bayon alliance to get their dominant seven, the group needs Joe on their side (who has grown more distant from the group). Well leave that clutch move to Savage, the broiest of them all, who tries to sway a slightly indecisive Joe to their side. Kass, Ciera, and Abi-Maria obviously see they have low numbers, but hope to acquire the power with additional merge friends. Spencer is already possibly on their side after he and Kass mended fences, Kelley Wentworth is still down the the shuffled Ta Keo final five, which means they might have Keith and Joe. Even Spencer talks to Joe to try and become potential allies since Spencer has nothing but his strategic gameplan drawings in the sand. Oh Joe, the center of the universe. Everything orbits around that manbun. 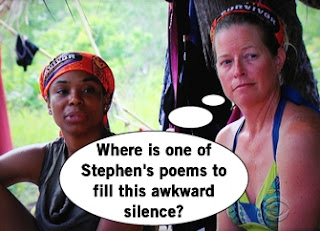 Kass' senses are all correct when she senses the massive brodown happening on Bayon. Once Savage is praising Stephen for reciting a poem out loud you know something is up. Also Stephen, might I suggest an inappropriate limerick for next time? Anyways, Kass tries to plant seeds of doubt and get info from her former Cagayan castaway Tasha about Bayon, so Tasha lies since she still doesn't trust from their original season. But Tasha, this is about second chances! Haven't you heard Jeff Probst saying it 18 times a day? Tasha and Kass try to talk again, drawing a literal line in the sand to point out they are on opposite sides. They bring their drama back to camp, with Kass outing to the group that Tasha 24 hours ago told her "bye bye Bayon" and lied to her. With Chaos Kass simmering at the surface, Ciera decides to jump in and create a lie that Savage wanted to vote out Jeremy and Joe... while Savage is standing two feet behind her. Ugh girl, if you're going to create a big lie do it in secret not while the man is there to defend himself. But hey, all this chaos is pretty entertaining. 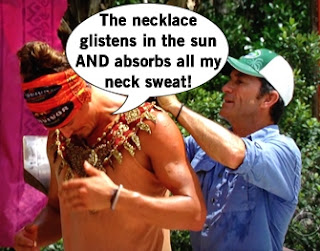 The Orkun tribe arrives for their first individual immunity challenge with lots of beautifully painted balance beams in an array of complementary and ugly colors. When you merge with so many people, you're going to have to include some dud colors. The challenge is to stand on an increasingly narrow beam while balancing on a ball on a platform, with fluctuating hand positions on the platform's pole to make balancing more difficult. It's basically Jeff Probst soundbite galore with lots of talk about balls and grasping poles. The two middle men, Spencer and Joe, become the final two survivors in the competition which only validates theirs competition beast threat level status. Joe is the first to win individual immunity, gifted with the ornate immunity necklace that has red fabric sure to soak up all the stank on these people. 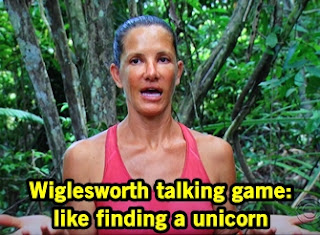 Given their proclivity to cause chaos, and given that one has used said description in her nickname, the Bayon tribe plans to split their votes between Kass and Ciera (in case Kass plays an idol). No surprise, Savage actually wants them to vote off Ciera because she put him on blast. Kass wonders if she could get the numbers since the Bayon group is splitting their votes. If she can get Kelley Wentworth and Spencer on board, they could vote out Tasha. Spencer is torn because the main majority is anti-Kass/Ciera, but Kass/Ciera helped saved his butt his last vote. What's a swing vote guy to do? 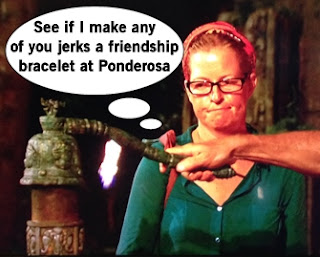 Tribal Council time! Joe and Keith finally light their torches, which means everyone has officially been to Tribal now, which is an impressive run on torch-less nights. Once Kass insists she's not playing the chaos game this time around and name drops Tasha, Tasha gives a classic reaction face and it becomes a battle between the two again. Cut to Keith's amazing attempt at doing cat claws. Never change, Keith Nale. Ciera gives an impassioned speech about coming to win the game and for others to play for themselves, not a group (which is what her downfall was on Blood vs. Water). It's definitely the way Spencer is playing as he has no real allies and explains tonight's vote is tonight's vote and tomorrow will be a whole new day for him. Stephen points out how the whole game has evolved and that the targets at the merge are women, when it is typically a great time for all the alpha men to attack each other for dominance. Probst points out that maybe the game is less about alliances and more about weekly voting blocks. "Let's play," Ciera says. Truth girl, play the game! The votes are cast with only two against Tasha, one for Savage, and four for Ciera. But sadly it is Chaos and/or Calm Kass (AKA Comcast) who is eliminated with six votes. Who knew I'd be so bummed to lose Kass in this game? Guess this is my second chance too. Cut to heavy-handed Jeff Probst smirk and thumbs up.
[All images credited to CBS]