What Is MJ Unpacked?

As in previous iterations of MJ Unpacked, the crowd in Las Vegas consisted of curated cannabis brands, retailers, and accredited investors. George and Kim Jage, founders of Jage Media, created MJ Unpacked to establish a diverse and accessible forum to showcase retail and CPG-focused brands. At this event, attendees see the spotlight on branding and community-building.

Opening the conference on Day One, George Jage said, “MJ Unpacked enters its second year as the only national cannabis event exclusively for brand and retail executives and investors, evidenced by brands on display from across the entire U.S. adult-use market and setting the stage for a flurry of deals getting done. This is such a pivotal moment for the cannabis industry with new state markets emerging and we’re looking forward to creating opportunities for each and every attendee at our event.”

The first day started strong with a market deep-dive, courtesy of BDSA Analytics co-founder Liz Stahura. As Stahura revealed in the kickoff presentation and in her Venture Stage discussion later that day, BDSA does not have federal legalization of cannabis built into its predictions for the next five years. While this may be a blow to advocates, BDSA does predict enormous growth for the legal industry, estimating global cannabis sales to grow to $61 billion by 2026, with U.S. sales reaching just over $46 billion.

Stahura identified new retail markets (such as Michigan, Illinois and New Jersey) and emerging markets (New York, Connecticut and Florida) as the regions that will drive the next two years of industry expansion. Florida has outperformed all other medical markets in the country, showing 70-80 percent growth each year of its operation, and the state is on track to legalize adult-use by 2025. New York meanwhile will likely become the third-largest global cannabis market by 2026, based on patient counts and consumer adoption rates. Currently, New Yorkers take pride in the Big Apple being the cannabis consumption capital of the world.

Eyes on economic trends continued throughout the afternoon. George Jage hosted a fireside chat on the mainstage with a trio of the most successful multi-state operator (MSO) executives in the sector: Luke Anderson, co-founder of Cann; Gary Santo, CEO of TILT Holdings; and Dennis O’Malley, former CEO of Caliva and current COO of The Parent Company. In a guide to federal regulations, Sheri Orlowitz, founder and Chair of the Council for Federal Cannabis Regulation, discussed how much we need to “buckle up” for governmental interaction with the industry. Her panelists Kellan O’Keefe, President and CEO of Flower One, Ben Kennedy, CEO of Fable Libations, and Tahir Johnson, CEO of Simply Pure Trenton NJ explored the likelihood of the SAFE Banking Act’s passage in a lively conversation. SAFE Banking, which would allow cannabis businesses to conduct business through national banks without any penalties, has passed the House of Representatives seven times since its introduction, most recently in July 2022. The Senate is set to vote again on the bill this fall.

Johnson noted that SAFE Banking needs to include language and provisions that make space for legacy cannabis operators to thrive when transitioning to legal markets. “You can’t tell me that your new entrants to cannabis know more than someone who’s been doing this for years,” he said. “You need to have that expertise to succeed.” 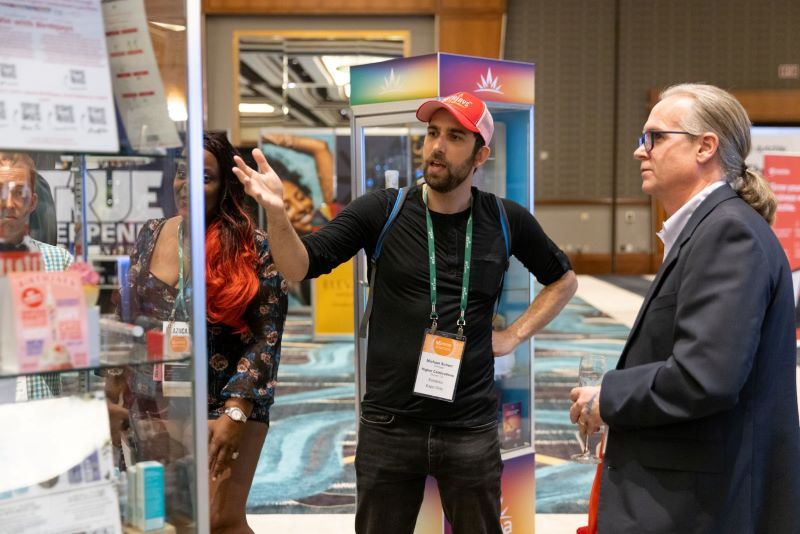 In a powerful segment, industry leaders were asked, “Is cannabis recession-proof?” Wanda James, founder and CEO of Simply Pure, had the ultimate answer.

“We are not 'proof' anything,” she said, “not recession proof, not next president proof. If you are not like water, you will not survive. In 13 years I have seen everybody fail. What does that mean? Everybody can fail. Rich dudes? Fail. Corporate dudes? Fail. Famous dudes? Fail. It's the same way tech came out, but tech isn't illegal. We are dealing with the same municipality. You have got to be a business guru in the industry to survive.”

Her fellow panelist Nadir Pearson, Vice President of Business Development at WISECO, noted that cannabis is “barely commodity proof.” Panelist Eric Block, Chief Revenue Officer at Wana Brands, and moderator Kim Sanchez Real, co-founder and CEO of Azuca, concurred that “You don’t know what you don’t know” when it comes to the economy. 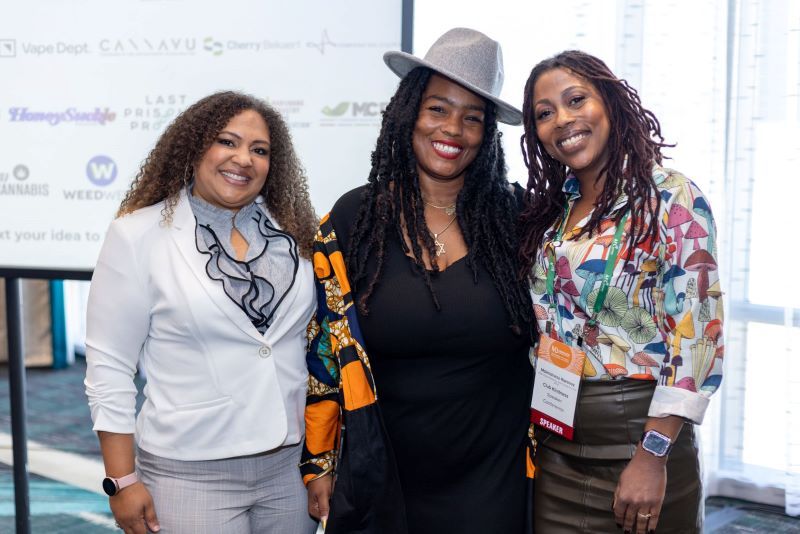 Day Two of MJ Unpacked continued with the official opening of the Brand Experience Hall, showcasing THC brands from across the country. Pitch Presentations also began on the Money Stage, allowing dynamic brands to seek connections with potential investors. The focus was on women and BIPOC-led companies, including House of Saka, 40 Tons, and Roll Up Life.

One of the standout panels featured the candid conversation “Black Women Get Us Higher,” a meeting of the minds for Black women who survived the War on Drugs to become entrepreneurs. Kika Keith, co-founder and CEO of Gorilla RX Wellness Co., moderated among the pioneering Tiana Woodruff, founder and CEO of Queen Mary; Amber Senter, CEO of MAKR House; and Mskindness Ramirez, CEO of Club Kindness and co-owner of Our Kind.

The evening ended with the Clio Cannabis Awards, honoring the best of the best among advertising and marketing. This year has been a milestone for cannabis advertising. Weedmaps had major hits in their “Brock Ollie” campaign, amplified by its rejection from NBC ahead of the Super Bowl, and in the Pride Month collaboration with Cann beverages, the music video “Taste So Good” starring the cast of RuPaul’s Drag Race Season 14 and numerous LGBTQIA+ icons. Both were uplifted by the Clios; “Brock Ollie” won 3 awards, while “Taste So Good” received 5. (Cann and Weedmaps additionally received individual Clios for other projects released, and Cann won overall Best Brand of the Year for 2022.) Other categories honored brand design, such as Klaus’s win for Most Colorful Beverage, or advocacy, as seen in Charlotte’s Web’s Rock the Roc documentary. Claybourne Co. took home the coveted Best of 420 Award with their “Rollin’ with Claybourne: Road to 420” campaign.

Rapper Berner, co-founder and CEO of the globally renowned brand Cookies, accepted his Honorary Award to great applause. "I’ve been put in a box my whole and stereotyped because what I do for a living this felt good," Berner wrote on his Instagram account. "Tonight I won the 2022 Honorary Clio Cannabis Award that recognizes creators on the forefront of marketing and communications in the cannabis industry."

We are thrilled to announce that Honeysuckle also won a Clio for our Empress State photo shoot in our Lil Wayne 420 print edition. This feature is a tribute to the many incredible women leading the East Coast cannabis industry, which you can read here. For a full list of the Clio Cannabis winners, go here. 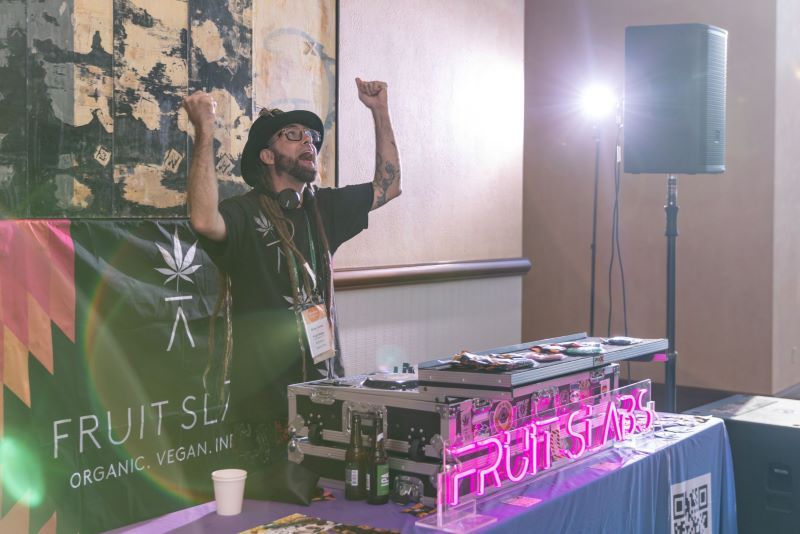 On Day Three of MJ Unpacked, panels gave way to breakout sessions. Experts examined important topics of building a brand to be a household name, the perils of discount culture, and the unique program “How to Keep People Happy,” a look at creating positive workplace environments.

Throughout the afternoon, attendees enjoyed the diverse exhibits in the Brand Experience Hall one last time, appreciating networking opportunities warmly as they walked. During the entire conference, MJ Unpacked had yet again brought out the Flower of Life Gong, an instrument based on Sacred Geometry to be struck when celebrating a deal. Just as before, the gong was emblematic of the MJ Unpacked difference from its fellow trade shows – the organizers go that extra mile to ensure a premium human-to-human experience. They know the best chances for a company’s, and an industry’s, success lies in the relationships that can be built.

“It’s been really cool to see all the people we haven’t seen since last MJ Unpacked in Vegas,” said Maggie Wilson, Chief Marketing Officer at Fruit Slabs. “It’s just been so nice to see all their smiling faces and to see where they’ve been since the last Unpacked and how much progress they’ve made. To see them coming back even after they’ve gotten funded or gotten new licensees. Because there’s just so much opportunity. And it’s a community.”