Tags: star book love
June 28th 2021
View original
Another very random list of reads to share with you from this past month! Honestly, a lot of 'just okays' and a few I didn't make this list because I didn't finish. But, a couple of good ones too. 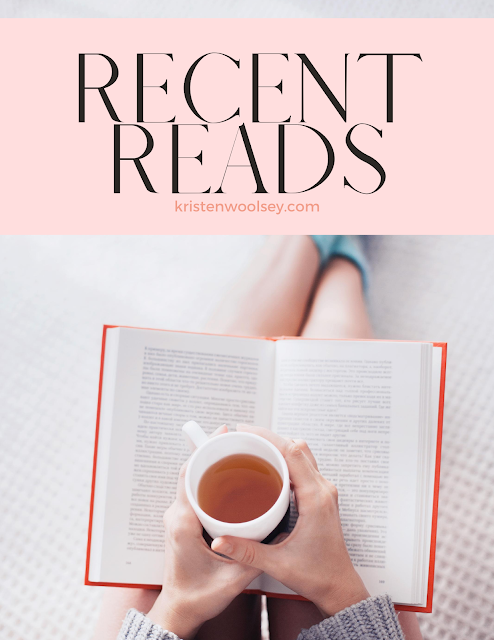 Basically: This is Matthew McConaughey's autobiography. He takes you through his whole life (so far) and notes some successes and some failures.
I listened to the audiobook and I always Love listening to biographies in the author's own words. Here's my review: Matthew McConaughey is NUTS. This was such a wild ride. A very entertaining wild ride, but he is probably the most unusual person I've ever read about.
Rating: 4 Stars ⭐⭐⭐⭐

Twice In A Blue Moon

Basically: Sam and Tate meet on vacation and have a whirlwind first love style romance. But, after Tate reveals a big secret to Tate, he betrays her trust and the two go their separate ways. 14 years later their world's collide again giving them a second chance.
Christina Lauren's books are so easy to read, and this one was no exception. But, it's incredibly unrealistic and silly in a lot of places.
Rating: 3 Stars ⭐⭐⭐

Basically: Sky is 17 and she ends up falling for a guy named Holder. He's super mysterious and of course, not who she thinks he is. Once everything is revealed, her life will never be the same.
Ugh, I ALMOST put this book down. The guy is *creepy* and red flags were flying everywhere. I stuck with it, and it is explained why he is so mysterious. Another Over The Top kind of book.
Trigger warnings for child abuse.
Rating: 3 Stars ⭐⭐⭐

Basically: Lila is working in her aunt's restaurant because she is starting over from a bad breakup. One day she serves a mean food critic, who happens to be her EX, when he drops dead from apparent food poisoning. She's the only suspect, so she tries to figure out what happened on her own.
This is a genre people are referring to as a 'cozy mystery'. I think I like this kind of book! Not gruesome, and more fun than scary to read. But, this one wasn't amazing for me. It started off really good, but just kinda fell flat.
Rating: 3 Stars ⭐⭐⭐

Basically: This is a memoir of Tara Westover and her very unusual upbringing. Her parents were very religious and sort of like dooms day preppers. She was 'homeschooled' in that they didn't send her to school at all. But she has a thirst for knowledge and teaches herself enough that she goes to college.
Honestly, a lot of this book is unbelievable. Her upbringing was WILD, and I'm shocked she survived it. Literally, all these people were almost dying from freak accidents. This was really fascinating and inspiring. I don't necessarily believe going to college is the height of success, but it's a great example that we can do amazing things if we want to. If you liked The Glass Castle, I think you'll like this.
Rating: 5 Stars ⭐⭐⭐⭐⭐

Basically: Jane is a dog walker in a upscale Birmingham neighborhood. She's got a rough past, but her life changes when she meets Eddie Rochester. He is recently widowed, when his wife died in a mysterious boating accident.
Super suspenseful and twisty! This is like a modern take on Jane Eyre or Rebecca. It's a quick and easy read. One that makes you hate everyone by the end.
Rating: 4 Stars ⭐⭐⭐⭐

The Answer Is...Reflections on My Life

Basically: This is Alex Trebek's memoir. Full of anecdotes of his life and time on Jeopardy.
Another audiobook for me! He doesn't narrate the whole thing, as he was very ill when writing his memoir. It's partly read by him and Ken Jennings, which felt appropriate. I of course learned a lot about him, and especially enjoyed the behind the scenes from Jeopardy.
Rating: 4 Stars ⭐⭐⭐⭐

Basically: Kristen is a really cool girl, who is facing a really hard medical decision. She is also helping plan her bff's wedding. She is immediately attracted to the best man, but because of what she is dealing with she keeps him at arms length.
Hmm. How do I feel about this one? It was an easy, quick chick lit book. It tackles some tough issues, and of course the leads have great chemistry. But, it's also really Over The Top and I'm kind of getting sick of that. PG13+ for sure.
Rating: 3.5 Stars ⭐⭐⭐

Basically: Henley works for a cruise line, but has never been on a cruise! She is up for a promotion but her boss insists she go on one of the cruises. The only problem is Graeme (her office nemesis) is up for the same promotion and has to go with her.
This book was described as The Unhoneymooners meets The Hating Game, both books I really enjoyed. This felt much deeper than the typical romance, which was much appreciated after The Friend Zone and Hopeless reviewed above. Definitely enjoyable and a great book to read on vacation! I really liked it. The only thing I got irritated with was the spelling of Graeme. I was pronouncing it wrong in my head until they made the graham cracker joke.
Rating: 4.5 Stars ⭐⭐⭐⭐

Basically: It's summer on the North Carolina coast. Gray and Diana are two women who's lives intersect during a time when they could both use a friend.
Mmm, not too much to say, except this is an easy beach read. Nothing special for me though!
Rating: 3 Stars ⭐⭐⭐

Basically: A female apothecary named Nella supplies poisons to women who need them. She only helps women who are in situations they need to get out of. She meets a young girl named Eliza who starts off as a customer and then ends up being a friend. Meanwhile, in the present, Caroline is going on her anniversary trip alone, when she discovers one of the apothecary's vials in the river. You time jump back and forth as you figure out what happened to Nella and Eliza.
I didn't even rate this book on Goodreads. It started off so strong and good and then kind of went off the rails. Great concept, original story, and really good characters. But, what started off as poisons and natural remedies turned into 'magic' and that really ruined it for me.

This Time Next Year

Basically: Minnie and Quinn were both born on New Year's day in 1990, minutes apart, in the same hospital. Minnie feels unlucky because bad things always happen on her birthday (and life in general), starting with the day she was born. Quinn stole her name and the fanfare that came with being the first baby born in the 90's. Quinn's life went in the other direction and he seems to have it all.
There was a lot of press around this book because it takes place in 2020, and was written before there was any thought of a pandemic. So, you just have to get past that it's going to be in a pretend timeline. I also turned 30 this past year and was born in 1990, so this was kinda fun. I really enjoyed this book. The only thing that could have made it better was just a little more of Minnie and Quinn!
Rating: 4 Stars ⭐⭐⭐⭐

Basically: A gene has been discovered that helps you identify your soulmate. You can get on this dating website and be matched with your one true love. Seems great, right? What could go wrong? Well, everything, haha. You follow 5 different people as they meet their matches. This is a thriller, not a romance!
This was such a good concept, but I didn't love the execution of it. I was hooked on some of the stories, but skimmed through others as I saw how they were playing out. *dramatic*
Rating: 3.5 Stars ⭐⭐⭐

The Last Thing He Told Me

Basically: Hannah's husband Owen disappears. But before he goes he manages to get a note to her saying "Protect her." The her has to mean his 16 year old daughter Bailey. Hannah and Bailey set out to find her father together.
Really enjoyed this one. It's a good mystery that ends up being more about the stepmother/daughter relationship than anything else. I wouldn't put it in the thriller category because it's pretty slow paced. Can't say too much without spoilers!
Rating: 4 Stars ⭐⭐⭐⭐
Leave a comment below and tell me if you have read any of these titles! I'd love to hear your recent reads with 5 stars!


This post first appeared on My Personal, please read the originial post: here
People also like
Homemade No Churn Raspberry Ice Cream
Mr Vegas Casino Review – Get up to a £200 Bonus on your First Deposit