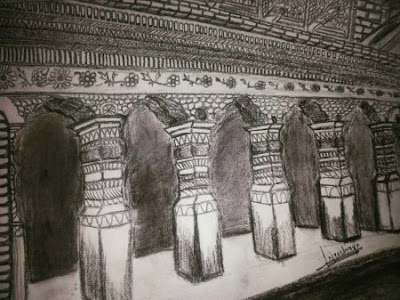 Nepalese art has evolved through time. It has a slight hint of Indian, Tibetian/

Chinese art as Nepalese history is influenced by their customs and traditions in some way. However, during the medieval ages, Nepali art developed its unique form of art. Durning the Lichhavi era, Chinese pilgrim Hsuantsang gave an impressive description of Nepalese artistry and their ability to shape metal, wood, stone, and paint (Traditional art in upheaval, Susann var der Heide).

During the Malla period, wooden crafts and architecture began to reach its summit when the valley was divided into 3 kingdoms (Kathmandu, Bhaktapur and Lalitpur). Wood was extensively used for constructing houses and wooden doors, windows were carved with beautiful designs including mythical creatures as well as gods. Such woodwork shows the uniqueness of Nepalese art and the level of the woodwork is exquisite.