Editor’s Note: This article is a great case-study and delves into real issues and offers some action towards solutions. It is my hope that more cities around the world will return to greening. I have watched my city transform over the last 12 years, grow rapidly and on the surface, all is well but the lack of planning and old systems have done a lot of damage. How can we get administrators to actually implement plans that benefit its citizens? Here we see social media playing an important role. It’s time the voice of the people and their needs are met. As the population grows, it’s imperative that the communities we maintain and build can support the true needs of the people.

A Guide To Visiting Antigua, Guatemal…
How come so many Christians don’t rea… 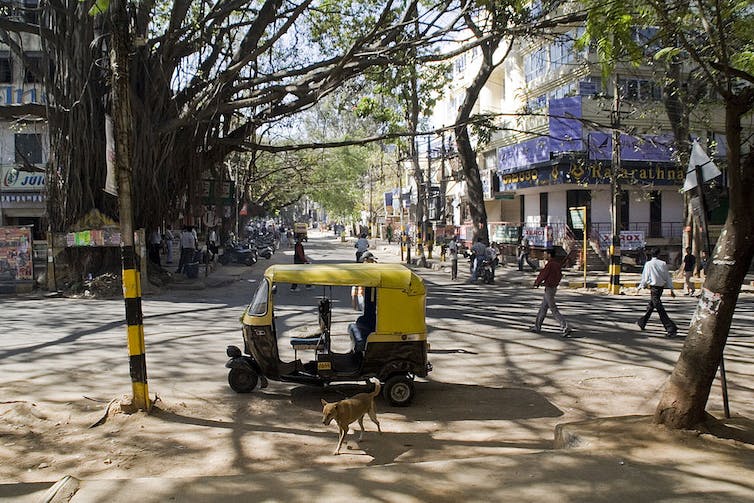 We tend to think that Nature and cities are polar opposites. Yet this is not true. As my research on Bangalore or Bengaluru – India’s IT hub – shows, for centuries, the population of this region grew because of nature, not despite it.

In my book Nature in the City: Bengaluru in the Past, Present and Future, I take a deep dive into the ecological history of an Indian city, going way back in the past to the 6th century CE.

Inscriptions on stone and copper plates show that the starting point for a new village was often the creation of a tank, or Lake, to collect rainwater – essential and life-giving in this unfavourable low-rainfall environment.
These inscriptions provide fascinating insights into the close relationship that these early residents had with nature. They describe the landscape as consisting of the lakes, the surrounding irrigated and dry land, the “wells above”, and the “trees below”. This three-dimensional view of the landscape, consisting of two major resources, water (lake) and food (agriculture), nourished by nature below (in the form of wells) and above (in the form of trees) is a remarkably holistic conception of nature.

Unfortunately, in today’s urbanised India, we have lost all trace of this three-dimensional vision.

The central areas of Bangalore had 1960 open wells in 1885; today, there are fewer than 50. Bangalore also lost many of its lakes, which were considered to be filthy breeding grounds for malaria, and converted to bus stands, malls, housing, and other built spaces. 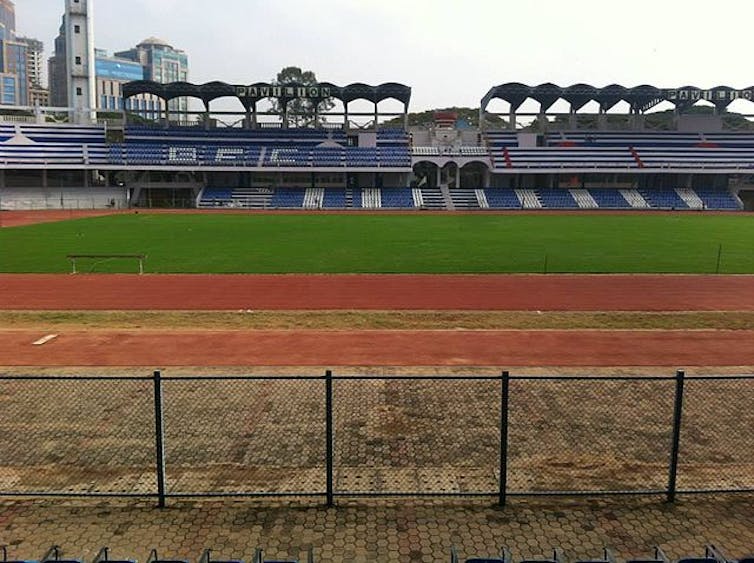 Sree Kanteerava stadium was built in 1997, where Sampangi lake used to be located before.
Shakkeerpadathakayil/Wikimedia, CC BY-SA

The city’s central Sampangi lake, which supplied water to many parts of Bangalore in the 19th century, was transformed into a sports stadium by the 20th century, leaving behind only a tiny pond for ceremonial religious purposes. As long as lakes and wells supplied water, essential for the activities of daily life, they were worshipped as sacred and protected as life-giving. 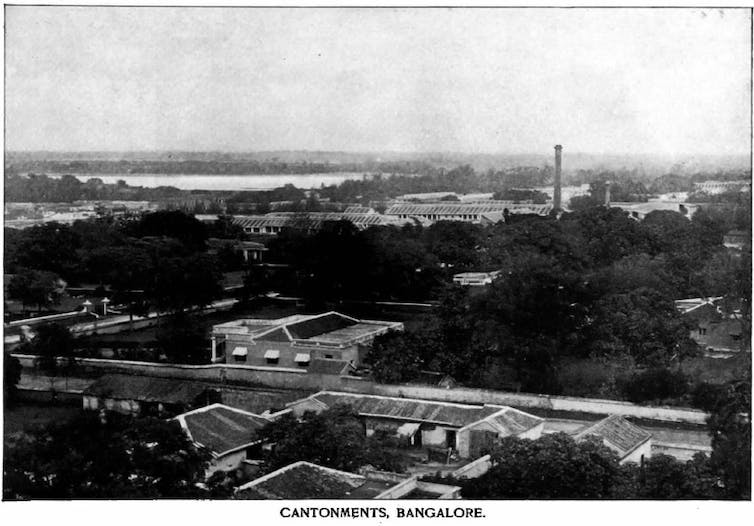 Furneaux, JH (1895) Glimpses of India. A grand photographic history of the Land of Antiquity, the vast Empire of the East. Historical Publishing Company. Philadelphia.
Furneaux, Wikmedia

Rituals celebrating the overflowing of lakes during the monsoon by paying homage to the lake goddess kept the importance of lakes in the forefront of people’s imaginations. But once piped water began to be provided in the 1890s, these water bodies began to decay. By the end of the 19th century, wells and lakes began to be polluted with garbage, sewage, and even corpses during times of epidemics and disease.

What transformed this centuries-long, strong relationship between people and nature? When Bangalore shattered its local loop of dependence by importing water from outside, people forgot the importance of their local sources of water.

Yet, as our research has shown, Bangalore still needs water just as badly for its resilience. The city has grown so large that piped water from distant rivers can no longer supply all its needs.

Thus resurgent citizen movements across Bangalore have begun to focus on protecting and restoring lakes in their neighbourhoods, which will also recharge the water below ground. In some low-income settlements, where adequate water supply is a constant challenge, community wells, once ignored, are now being assiduously protected and maintained as well.

The same pattern – of an early, close relationship with nature, followed by a break, and later a resurgent interest in the connection – is also playing out when it comes to trees. Early residents did not only focus on water, but also “greened” this dusty, hot landscape of the dry Deccan plateau. Successive rulers from the 16th century onwards, and common citizens planted millions of trees over centuries.

The number of lakes in Bangalore increased between 1791 and 1888 then rapidly decreased after piped water was brought in.
Sreerupa Sen, CC BY-NC-ND

Each settlement was greened with a gundathope – a woodlot commonly planted with fruiting trees, jackfruit, mango and tamarind – which provided shade, fruits, firewood for cooking, grazing material for cattle, and occasionally timber as well.

When one tree was chopped down, another was planted to ensure continuity. New areas of the city were assiduously greened by administrators, who planted trees, and residents, who watered and cared for them, benefiting from the services they provided. This practice of greening continued during the British colonial period of governance, and later into the 20th century, after Indian independence. Because of the cool climate of Bangalore – in part due to its location on a plateau, but also because of its lakes and trees, created, planted and nurtured by local residents and rulers over centuries – the city became a chosen location for the British army, and later as a science and industrial hub in south India.

It is no accident that Bangalore, once called India’s lake city and garden city, became the country’s IT capital.

By the late 20th century, this relationship had begun to fray. With rapid growth, roads and other built infrastructure gained importance in the minds of planners. As a consequence, trees were disregarded, and felled in their thousands for development projects in Bangalore.

Inevitably, with more private vehicles on the road, and fewer trees, the city became hotter, and the air severely polluted. Citizens soon realised this connection. So did academics. Our research, for instance, demonstrated that trees cool the air by 3 to 5ºC, and reduce the temperature of the road surface by as much as 23ºC, as well as significantly reducing air pollution.

Social media to the rescue

Yet citizen movements did not fade. In the early 21st century, the nonagenarian Honnamma Govindayya has become an epitome of struggles to protect Bangalore’s environment. 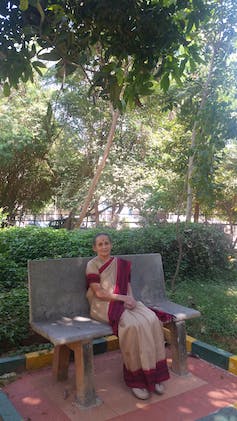 She fought against real estate developers who wanted to convert a local park that her children played in, taking a case all the way to the Supreme Court of India. She won and saved a tiny but very important patch of green from destruction.

Mass citizen protests in recent years have continued and gained significant victories for the city’s green cover, including the reversal of a controversial decision to build a steel flyover, which would have destroyed thousands of trees.

Today these movements are strongly supported by social media. In the flyover case, the twitter tag #steelflyoverbeda (“beda” meaning “no” in the local language, Kannada) went viral, attracting hundreds of followers.

Social media has provided an easier way for once-isolated groups of people to connect and coordinate, and often to ratchet up public pressure on nature-blind administrators. Who knows how many would have supported Honamma Govindayya if she had a Twitter account then?

Understanding the history of nature reveals a very different picture from the preconceived idea that, at least in countries like India, where the pressures of development and growth are so large, nature and cities cannot coexist.

Today, this perspective on the ecological history of Bangalore can help city-dwellers worldwide understand why nature in the city is not just important for the metropolis’s past, but also essential for its resilient future.

A history of resilience, Harini Nagendra.

This article was originally published on The Conversation. Read the original article.

A green struggle by a gutsy woman, The story of Honnamma Govindayya, an exceptional woman, who fought tooth and nail to save green space in her city.
How Local Innovations Are Helping Fix Bangalore’s Green Crisis

The post When cities were Nature’s haven: a tale from Bangalore appeared first on Conscious Life Space.

This post first appeared on Conscious Life Space, please read the originial post: here
People also like
A Guide To Visiting Antigua, Guatemala: The Best 5 Things To Do And See
How come so many Christians don’t really know God?