Life require us to develop certain skills to be prepared and face the real world, and  Learning a new Language is no exception since the level of development achieved by modern societies as a result of their economic and cultural integration demands the mastery of them. This linguistic reality imposes great challenges since, in addition to the mastery of their mother tongue, language learners and linguophiles must develop their communicative competence in a certain foreign language and in different social contexts. Learning foreign languages is a complex process that involves defining the 'right' method, a deep understanding of language and the application strategies that facilitate the development of linguistic abilities. Here are five methods I often find very useful when learning a new language (and even - at times - remembering my own!).


Use mnemonics or keyword association

One strategy that I find extremely helpful when studying a foreign language is mnemonics or word association which is linking the foreign word to the first word that comes to mind while creating a real or imaginary mental representation of it. For example: the French word chaise, which means chair in English, has a similar pronunciation to the word chess, so one way to remember this would be by picturing a chess board on a chair. Another example is the word garbanzo in Spanish which to some people (unfamiliar with this legume used to make hummus and tons other good stuff, but I digress...) sounds like garbage when it really means chickpea, so to remember this you could picture a garbage bag full of chickpeas. Mnemonics devices like these are not only fun and useful, but also help train your memory which is, of course, a crucial tool in language learning. 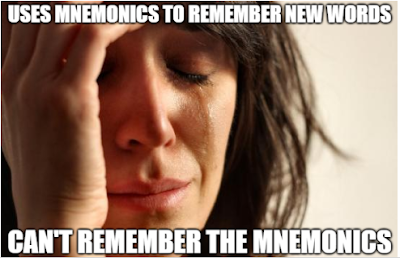 Oh, yeah, results may vary. 😅
Be weary of false friends

It also helps to be very weary of false friends (and I don't mean that just in a social context). False friends are words that look and even sound similar to a word in your native language, but the meaning is way off. These can cause great difficulty when translating texts and interpreting conversations which may lead to big misunderstandings (or no understanding at all). For example, what do you think the French and Spanish word sensible (sen-see-bleh) means in English? Did you guess sensible? Well, sensible is actually French and Spanish for sensitive. Another example in Spanish is embarazada. While it may look and sound like the word embarrassed, it actually means pregnant. False friends can change the entire meaning of a sentence and even the overall context - that's why it comes in handy to memorize these tricksters!

Another tool for language learning that I enjoy using often is a form of "voluntary language attrition" (well, that's what I call it!) which is basically detaching from your native language (or "throwing it away for a while"). This may be challenging at the beginning since it's hard not to be influenced by our native (and even non-native) language, but creating the notion that you are simply renaming all these things around you can be very helpful (hint, hint: post-it notes, children's books and even nursery rhymes are real friends). Once you are comfortable with the vocabulary, the grammatical aspect will be a breeze since there is less effort and pressure in understanding the context of the writing or conversation, thus, enabling you to better focus on structure. Think like a baby!

You might find children's books in the target language to be fun and useful (check out childrenslibrary.org - they have TONS of children's books in MANY languages). The simplicity of their grammar and vocabulary allows one to engage in the story with little to no comprehension problems. Feel free to supplement with audiobooks, movies, music and games in the foreign language - including your current favorites. Use subtitles, read lyrics, etc. in the target language; write them down, look them up in a dictionary. You can even change your language settings on your computer, cellphone, social networks, etc. Have resources at hand to help you with terminology (i.e. small dictionary, electronic dictionary, smartphone, etc.). Take advantage of both physical and virtual social networks to find conversation partners and further practice and enhance your terminology too. For example, you can join a local community or school club and/or a language learning network such as My Language Exchange, iTalki, Fluentu, among many others. This will also help you become familiar with jargons, idioms, puns, and other linguistic variations (yes, bad words too) in your target language. The possibilities for self-immersion are endless!

I'm from Vieques, a small island off the southeastern coast of Puerto Rico where most people speak only Spanish despite the fact that English is the second official language and many English-speakers live in the island. My family has no background of the English language whatsoever and it was more challenging then finding people with whom I could practice the language. I remember when I was 6, and had just started to learn English, my family and I were fishing when a middle-aged white man approached us with his son (about the same age as I was). I was so excited about using English (and quite cocky to be honest) when he asked "what do you folks use for bait?" I had no idea what he meant by "folks", but I knew the word "bait", so I said "squat"... instead of "squid". I felt so embarrassed when they started laughing and the man corrected me; but then he proceeded to do squats repeatedly with his arms in the air shaped like a squid's head. It was hysterical, and made me feel much better about that and any future mistakes I made. It also happens to be one of my favorite memories in relation to language learning, so just say it! Be okay with saying "stupid" things or "sounding like an idiot"- it's bound to happen and you can't avoid it. Get comfortable with making lots of mistakes and just have fun, it's part of the learning process!

Discover the Magic of Venice in Novem…
How to Get Started with Sports Bettin…
8 Signs You Should Avoid That Potenti…
How To Make A DIY Nature Mandala Craf…
Crafty breaks: 15 of the UK’s best cr…


This post first appeared on Into My Broken Mind, please read the originial post: here
People also like
Discover the Magic of Venice in November
How to Get Started with Sports Betting
8 Signs You Should Avoid That Potential Employer
How To Make A DIY Nature Mandala Craft
Crafty breaks: 15 of the UK’s best creative retreats