Into My Broken Mind: Social Anxiety

I often dread Social interactions; like I would rather jump off an airplane without a parachute than approach a stranger (or anyone, really). Ironically, I also enjoy people-watching (much like ant-watching) and often 'crave' social interactions, but I can’t help my damn social anxiety (even though I wasn't always like this 🤷). Thank goodness for cyberspace... 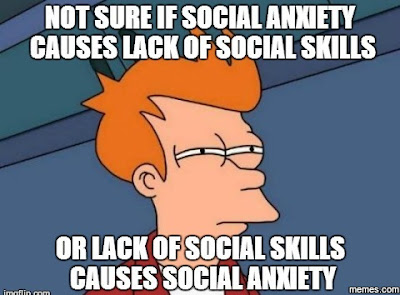 Social anxiety disorder is a persistent and irrational fear of situations that may involve scrutiny and judgment by others. Most people who suffer it often have difficulty speaking in public and even interacting with strangers. They also tend to worry about future situations in which they have to perform in a social context and worry about being shamed and/or being judged as “weak”, "crazy" or “stupid”. In most cases, the fear of public speaking is due to concern that others might notice some of the symptoms such as shaky hands or voice, increasing self-awareness and the fear of the possibility of being ridiculed. This extends to the social aspect of their lives as they may experience extreme anxiety when talking to strangers for fear of being perceived as confusing, irrational or even foolish, thus, making it very difficult to establish positive relationships.
This disorder can also lead one to avoid eating, drinking, walking, or other daily activities in public. In most cases, symptoms such as palpitations, dry mouth, indigestion, nausea, vomiting, diarrhea, muscle tension, tremors, shaky voice, flushing, excessive sweating, and confusion may appear; and, in severe cases, people experience crippling and debilitating panic attacks (I am so grateful for proxies and online shopping...). These physical manifestations may become a source of added concern and, well, anxiety - one may feel that the symptoms will result in more undesired and shameful attention, especially if it affects academic and/or work performance.
Many of us tend to avoid social situations in which we may experience anxiety or intense stress like going out to open, crowded places, meetings or even the grocery store. Many also often suffer from anticipatory anxiety in which there are increased levels of anxiety when thinking about future events or social situations. This can turn into a vicious circle; anticipatory anxiety usually leads to poor results (real and/or perceived) of the social situation which, in turn, leads to greater anticipatory anxiety for other situations. Moreover, a person may begin to "cope" by avoiding the situations altogether which further disrupts social life, decreasing any real chances and resources to adapt with the disorder and increasing its severity. (Yeah, I know, but still...)
Most people with social anxiety recognize that their fear is excessive and irrational. They try to avoid any dreadful situation in their lives. If they are forced to face one of these situations they may experience intense anxiety. For some people almost any social circumstance is cause for intense fear and anxiety (known as generalized social anxiety) while others have only one or two particular situations that trigger the anxiety (therefore considered to have a non-generalized or specific form of the disorder) which is limited to certain situations such as using an elevator or going to a bathroom when there are other people in there.
Researchers have suggested two other ways of categorizing people with social anxiety according to the type of situation that triggers the symptoms: functional and interactional. The functional group includes all those who have a strong anxiety about the idea of facing a situation, such as being in the presence of other people, dining out, working, giving a speech, etc. The interactional group would be constituted by those people whose fears are centered on the circumstances in which they have to converse (talk, listen, react) and/or relate to others, especially new people. 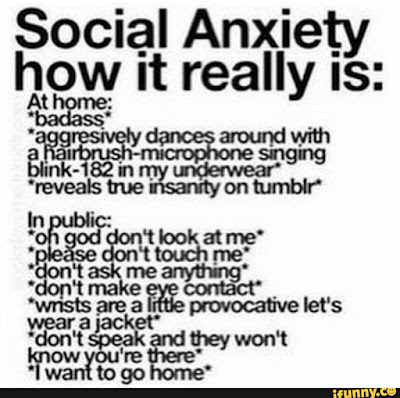 It is very common to confuse shyness with social anxiety, however the two are completely different, while someone shy can feel uncomfortable with other people, they would not experience any adverse symptoms with such intensity and most likely would not go so far as to avoid social situations. On the other hand, people with social anxiety disorder may not be shy at all; they may feel at ease with others most of the time, but certain particular situations may trigger their symptoms such as walking down the sidewalk on a busy road or giving a speech, which may limit normal life by interfering with career or social relationships. It’s also worthy to note that its onset is more frequent in adolescence, although it may start sooner or later, and many people suffer in silence for years and only seek help when their fears precipitate a major crisis in their lives.
Most people with social anxiety have developed the disorder due to their authoritarian, critical, violent or explosive, dysfunctional upbringing which usually turns into an insecure and fearful personality structure that often makes them victims of bullying, further increasing their fears and insecurities. Genetic, environmental and/or experiential factors (i.e. war, abuse, etc.) may also be at play. In addition, many end up developing insomnia, depression, obsessive-compulsive symptoms and alcohol and/or substance abuse and/or dependence.
Social anxiety can last for many years and even for life, especially if left untreated. For the most part, treatment consist of psychotherapy and/or psychotropic medications. The psychotherapy of choice is cognitive-behavioral therapy, either individually or in a group, which offers forms and alternatives to understand and cope with the problem, how to react, how to behave, etc. It also serves to learn self-awareness and social skills while discovering other interpretations regarding the reactions, behaviors and statements of others. Some providers also administer Virtual Reality Graded Exposure Therapy (VRGET), a way to expose the patient to social interaction virtually with 3D scenarios.
Avoiding social situations can lead to social isolation which can hinder the process of social (re)integration, especially if one has been isolated for a long time. People with social anxiety literally escape situations where there are people they do not know, avoid interactions with authority figures and/or exposure to others (i.e. crowded, open spaces). Many feel ashamed of themselves, so in general, are rather reserved and avoid opportunities to participate in social contexts - sometimes even around familiar people.
Social anxiety can be exhausting and deprive one of many challenges and opportunities. This is why it is important to diagnose it in time and carry out an effective treatment in which the person is able to identify any triggers and other factors. With knowledge and a lot of hard work and perseverance it's possible to improve the quality and quantity of social interactions. Seeking help alone can be dreadful and overwhelming, but it's crucial to help maintain a stable life.
Olivia Remes, an anxiety researcher at the University of Cambridge has been studying the propensity to anxiety on a global level and has been able to determine which cultures, sexes and age groups are more likely to suffer from it. Remes hopes that his research will give visibility to the most affected groups, with the objective that governments and health systems direct mental health resources, interventions and follow-ups to these risk groups.
Do you suffer from Social Anxiety? How do you cope? Share your experience!
Or not 🤦
Thanks for reading.
Related Posts
Anhedonia Diet
Bipolar Disorder
Borderline Personality Disorder
Personal Health Definition
Substance Abuse and Addiction
Understanding and Dealing With Emotional Pain


This post first appeared on Into My Broken Mind, please read the originial post: here
People also like
How Anyone Can Become Good at Blackjack
Attracting Healthcare Talent in the Post COVID Market
Top Back-To-School Preparation Tips & Activities
A Balanced Response to Allen Gwinn
10 Health factors that you can improve with Delta 8
Sony to Invest An Extra $180 Million on PlayStation First-Party Games

Into My Broken Mind: Social Anxiety